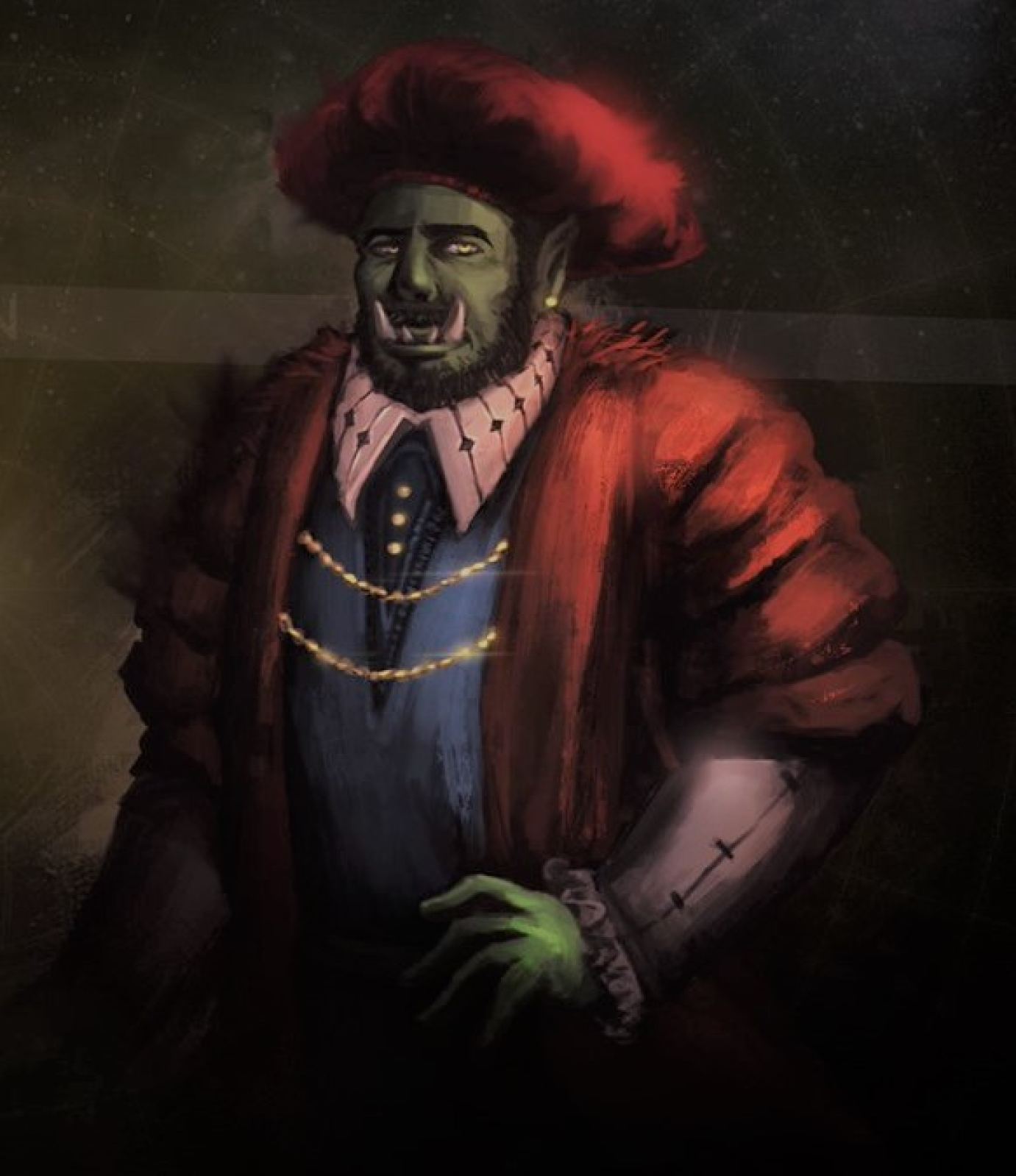 The orcs were once isolationist brutes until the growing political climate forced them to adapt. Now they are powerful capitalist that have their hands around the globe using the weapon of coin instead of axes.

These large bipeds, are usually muscular with two arms. They resemble humans and elves, but instead they have a more colorful complexion with pig features such as snouts and small tusks. Their skin color varies from red, green, and blue.

Their reproduction cycle is the same as humans. Females are pregnant for the same amount of time as well.

They are omnivores with a love of fish. Otherwise their biology is similar to humans.

Their intelligence is just below average on the Glenhook Scale: 4.5/10.

When greeting a familiar friend, it's common to clasp each other's arm instead of hands.

Their society was based around strength and conflict as they were bread to be. This permeated in all layers of society, but sadly we were not able to record any of their cultural history. After their Economic Revolution, they completely changed culturally. This involved rewriting their history and clearing away their old culture. Nothing left of it remains except rumors. From what some of our archaeologists have found, they used to collect teeth as trophies. The more teeth one had, the higher social status they were.   Another piece of their culture we found was the once sacred religion called "Oorzoma". It was based in a holy spirit called the Mother, she was the mother of all things and gave life to the orcs. She is the one that lets the world use magic as it is her blood. Through her sacrifice, she gives us power. Pure fiction of course.

With their change of lifestyle also brought new ways of life. They took ideas from the Wolvan population to the north and the humans from the Imperium. At the age of ten all orcs must take an apprenticeship. They take this tutor until they become an adult. It's also encouraged to explore the world to understand how places have different styles of economies and how to best deal with them. Once an adult they are encouraged to make their own business or join another owned by an orc. Generally, with the amount of new business made, mergers are quite common to avoid oversaturation.   In this new society, law became extremely important. Contracts needed to be binding for fair trade deals to go through without the other backing out. Lawyer and Judge occupations were created to enforce these laws and to find ways around them. When an orc can't find work in business, they tend to go into to law next.

Your wealth determines your social status. Rejecting this is a taboo.

The story of the orcs surprisingly doesn't start with them, but the humans and elves. The elves needed better labor then the human populations they had enslaved. A group of magicians called the Red Sunset Mystics who specialized in defense magic were tasked with editing the biology of humans to produce a stronger laborer. While this was an odd choice, their research in magical wards was the forefront of elven society, surely, they could make something. And so, they went to task for two years to come up with something. Eventually they would succeed.   After editing their biology, they fused together three creatures in various amounts. Humans were the base creature making up 66%. 11% was taken from goblin essence to bring a more submissive creature. The last 22% was from minotaurs to give them the brute strength. When they produce their findings, the king of the elves was overjoyed and demand to mass produce them. While unsure about this idea, they produced anyway and began a population of orcs in the present day Gorgra. The entire region within a few months became 40% Orc due to their massive production. It was an initial success for the first few months, but it wasn't long before nature found a way to adapt. the orcs revolted in 237 in what is referred to as the Green Skin Uprising or the more academical term Gorgra Revolts.   The revolt was not only dangerous to the elves, but the other races as well. A quarantine zone around many towns and villages in the hopes of starving the orc populations out. However, it only aggravated them more. By the time the elves massed a large enough force, the majority of Gorgra was under Orc control, but couldn't displace the other races completely. With rumors of war from the Ancient Yuigary Empire, they had to pull back and let the Orc take over the region. However, they were not smart enough to develop an organized government, so many fell into tribes and governed small areas of Gorgra to inhabit allowing the other races to fill in the gaps.   They kept their land through force and violence between anyone who crossed their path. Gorgra was a dangerous place that many nations tried to invade but failed at every attempt. This was their way until the Imperium joined the world stage.

With the geopolitical air centered around expansionism, Grogra was no exception. When the Orc finally pushed out the other races, they suddenly realized something. They found that the blood lost to their conflict was for nothing if they were to lose their homeland and it resulted in a cultural evolution among their population. Once a battle hungry people were now finding other ways of sating their competitive spirit. It culminated in what the Archives refer to as their Economical Revolution. Their previous methods of trade were based around a barter system that was controlled by the tribal leader. Now a full capitalist society was created, but they were still against foreign contact. And thus founded the Pagomas Council.   We believe this was due to their unique ancestral blood. The goblin blood and minotaur blood must have allowed them to change in this way to add and edge of greed and spirit to their mindset where humanity could not.

Human - These are worthy opponents. Their adaptability in many crafts makes them hard to out maneuver in the business world. They hope someday to work side by side with them because their ability to empathize with other people is something they really lack which inhibits their own trade deals.   Wolvan - They are mere craftsman, tools to be used in quest for wealth. However, they should not be underestimated. Their tactical wit in groups is impressive and their art it worth hanging in every home.   Narigita - Worthless creatures that don't respect our world. If we could we would have exploited their natural ability of hate to end their existence.

Dwarf - They are an unknown variable, but certainly worth investigating for more profitable investments.   Griffirca - The have advanced quite far with such limited resources. Their resourcefulness could prove valuable, but they are to happy to be pulled into many business ventures.

Fexian - We understand their plight, and we hope their suffering ends, but maybe if they changed like we did, they could advance their power. Their natural affinity towards magic is something we envy.   Otterun - They are their best trade partners. The two work hand and hand to distribute goods throughout the seas.   Melfloor - Rocks are not living creatures, no matter who says so. They belong back in the earth where they belong.

My neighbor is an orc. He's one of the kindest people I've met and his business is known worldwide. Don't misunderstand them by their old age culture.
— Archivist Renna 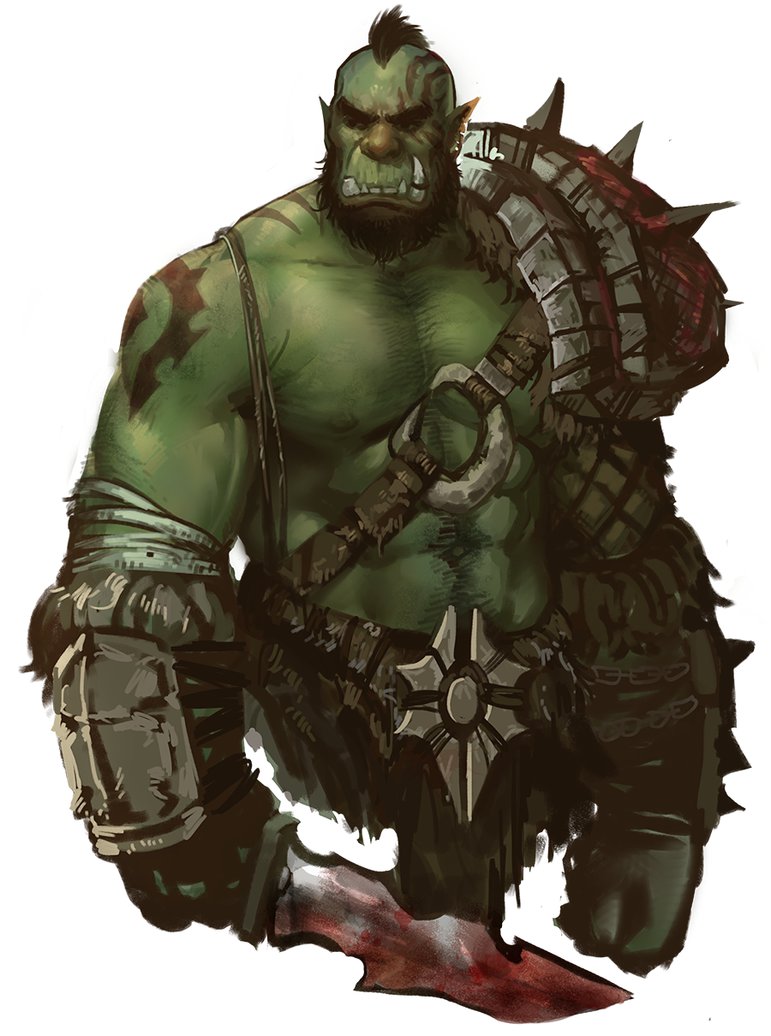 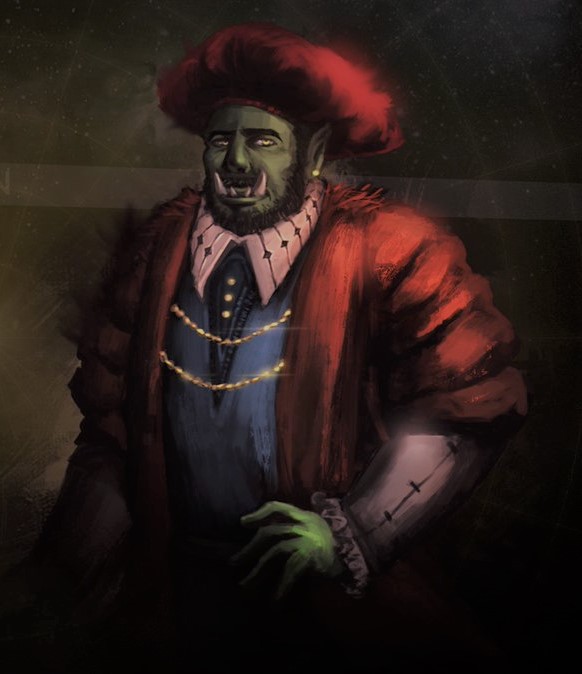 Would you rather met them in a dark alley or in court? 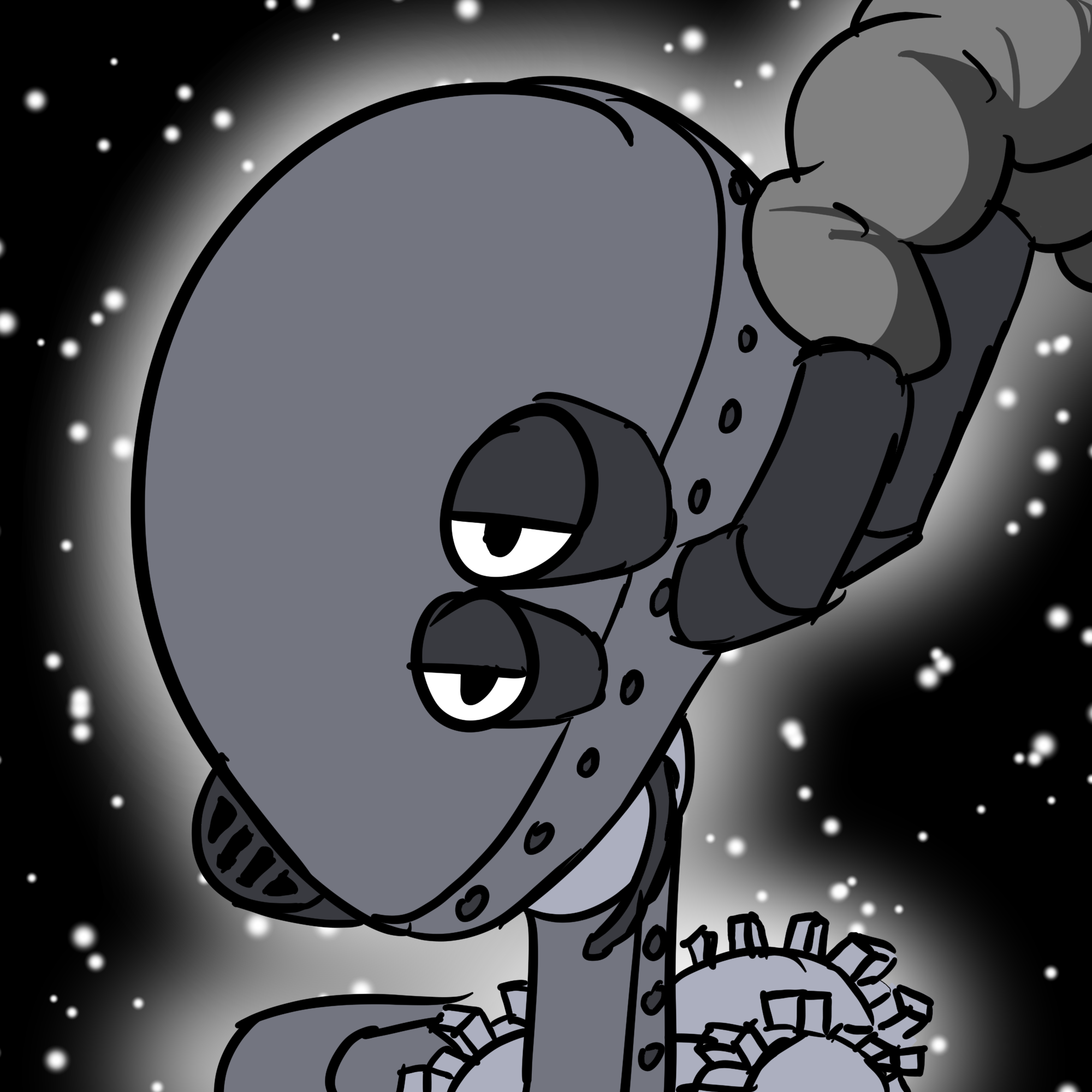 Yes! I love seeing some fancy Orcs instead of the barbarians that you see in literally every other fantasy setting they're put in.

I know right!! It gets old after awhile. I'm glad you liked it though 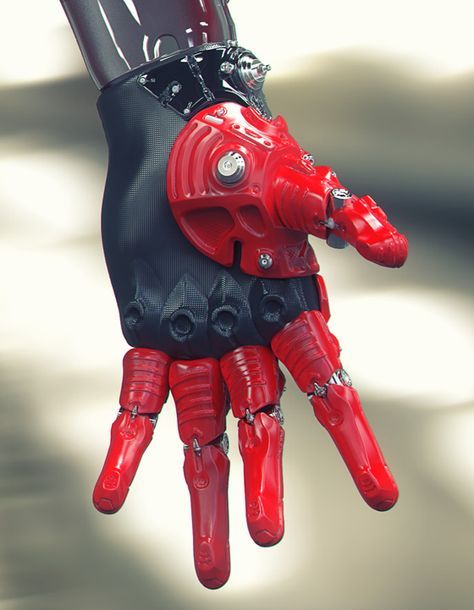 It seems like orcs have become even more unlikable.

Lol! I guess they have.