The fexian people are the pinnacle of magic attuned creatures in the known world. They are generally referred to as the feians (fex-ian). Casting magic is easy for these creatures and many take about 1/4 less time on average. This makes them a valuable asset to whoever controls the Sor-Ta Empire.

These creatures resemble the wild animal called a fox, but is able to stand on two legs. Compared to the other races, they somewhat short and light. While taller then dwarfs, they are not however taller then anything else.   Their ears are somewhat large and will usually have one solid colored coat. The colors would range from tan to a dark brown. Other colors such as white or black are incredibly rare. Males have a small black marking on their lower lip.

Like many mammals, they need a male and a female to reproduce. They have litters of two to three kits which take about one year of pregnancy to produce.

They have two main life stages of growth. The first stage is the Kit Stage where the grow into a full adult which lasts about 15 years. They usually stay quite small until the later years of Kit-hood where they grow taller quite fast.   Stage 2, adulthood is when Sexual dimorphism does takes place. Males get a small black streak above their upper lip and fur becomes more course. Females' fur gets softer and belly fur lightens and gets slightly fluffier.

They prefer an arid hot environment. Their fur it light and doesn't protect well from the cold.

They are carnivores, but can eat some fruits and grains. Too much grain or fruit will causes severe illness. Typically only a handful of either fruit or grains can be eaten with issue.

Above average intelligence. They are able to do complex logic puzzles and formulas with slightly more ease than other races. Glenhook Scale: 7/10

They only have one name they are given at birth. It's usually four to seven letters long. An example would be Nasih. They do not have a last name, but instead a family symbol. this is usually shown through a crest of some sort sewn into a cloth.

Males prioritize dexterity over strength. Being fast and swift is considered masculine. They prefer to distinguish themselves from females. This could be through their attire or fur care.   Females tend to want to make their fur, softer and bright. The softer and brighter, the more feminine they appear. Generally, their fur is their key aspect of their femininity.By either displaying it or showing great care is a typical custom. 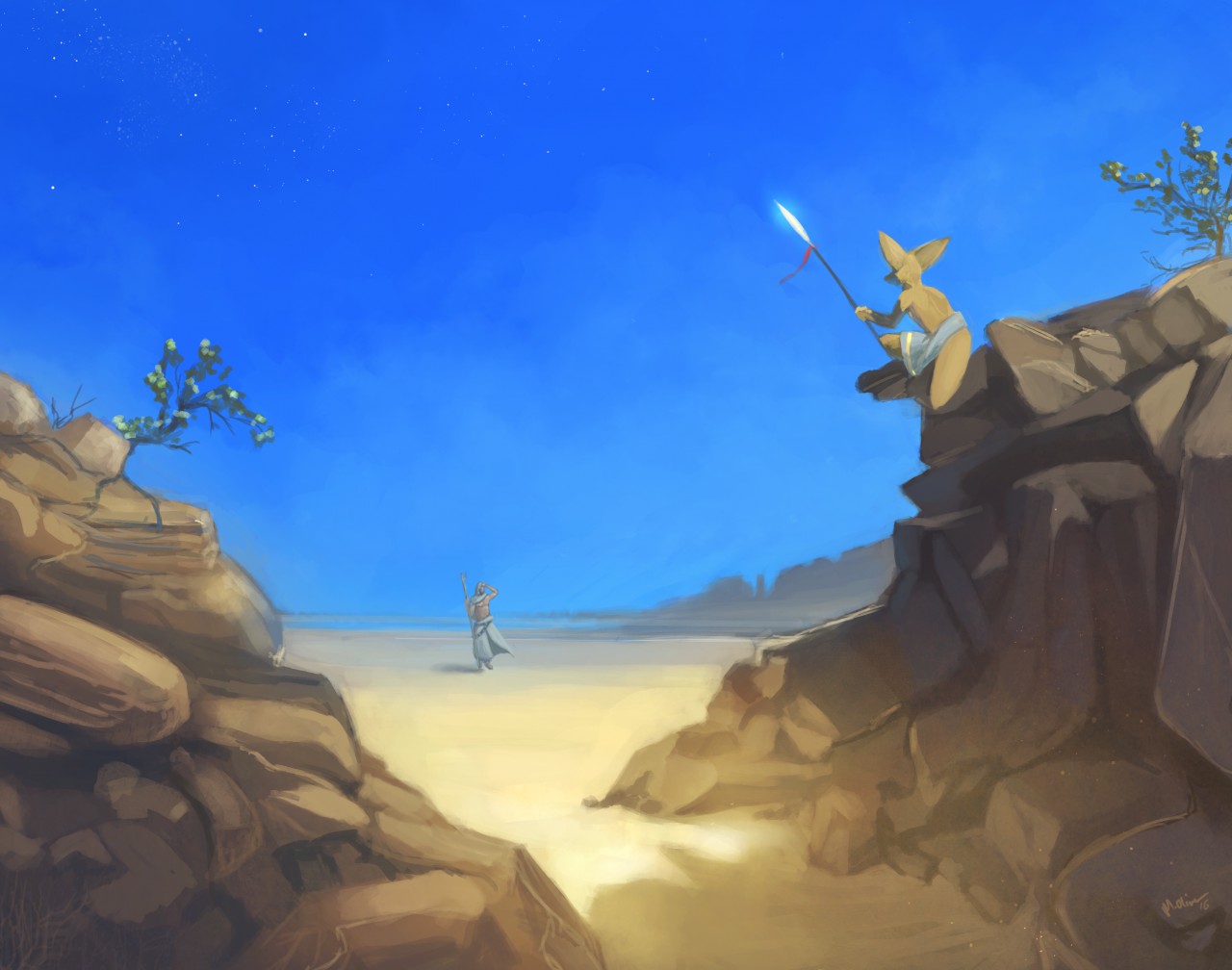 The Desert Pilgrim by WoadedFox
At the beginning of the relationship, the dominant partner will after the hand of their submissive partner. If the submissive partner accepts then they will court each other for a period of time longer than two to five months. When one of them bears a kits then they are cemented together as partners for life. Otherwise this is a sign that they are not meant to be, so the relationship is typically terminated. When the two are cemented together then a binding ritual occurs.   Each partner has specific duties in the family. The dominant partner's duty is to provide for the family. They run the household and maintain the finances. This partner tends to lead the household and represent their views as well. They are the "face" of the family.   The submissive partner keeps the house clean, and provide food and education to the children. This will also take upon the religious duties of the family as well. They are also the magic users of the family as well.

Little is known about their original home, but they are very magically attuned. It's said they had some unique devices, but little is known before they were conquered.

When you are greeted for the first time you must sniff each side of the face.

Males and Females wear about the same clothes. Shorts are worn with a hip sash along with a small tail covering. They wear a slightly big shirt and a cowl of some sort as well. Scarfs are also popular. The larger clothes are typically darker, while smaller clothes have lighter colors. White is no culturally worn.

Their culture has been wiped away by narigita, but not everything.

They have many complex dances and songs that are well known across the world. Their use of Solar and Lunar magics in these shows areaa sights to behold.

Most kits are introduced their affinity at a young age. A ceremony called the Jo-Mar is a celebration of age and attainment of their magic. This happens at about the age of seven.

A day filled with magic lights and celebration of individualism is expressed on this day. It happens once a year.

They are very individualized due to their imprisonment by the narigita. Sapien and animal ownership is hated by them all.

The fexian populations were located in the southern region of Lor-Ta on the edge of the vast deserts of this region. Their people consisted of tribes of about 30 individuals at a time. They lived in peace for some time, but that all changed when the Nar-Ta Empire attacked. The fexians had no chance. With no unity or advanced metalworking, they were quickly outnumbered and killed within six years. The remaining fexians were rounded up and enslaved by the Narigita. No tribe was left untouched and by the end of the Narigita's attack, all fexians were either dead or in chains.   They were sent to work in manual labor across all layers of society. From agriculture to mining, fexians were forced to work under dangerous conditions unfit for any creature. Many would work from dawn to dusk with no breaks. If any died, then they would be quickly replaced. The only respite they got was to make it themselves with magic. Life expectancy was short with them only living to about the age of 30 due to the lack of safety and the cost of slaves was low. Typically, Narigita constantly breed them to keep the salve supply high. Many kit would be forced away from their parents at a young age for reeducation for slave life. A small portion would not make it through this reduction period.   They eventually had their first revolt in 2762. We don't know the extent of this rebellion due to the short timespan and the lack of records on the event. However, we do no a lot that happened afterward. Any fexian that was above the age of 35 was killed due to their forbidden ideology and thought. Magic was restricted to only Solar magic. Magic use was also assigned to specific trusted individuals. Fexians caught breaking this rules were killed. Kuul-Lem started around this time as a cult ritual on specifically fexians. Domestic slaves were now less common. Life was hard for them for a long while.

Their masters had began to rival the power of the human empire called the Imperium. However, Narigita hubris was common during this time period as they began a way of using their slaves as war machines. However, human ingenuity came first, and war was declared on the Nar-Ta Empire. This surprise invasion was against all forms of combat they have seen. They held out for awhile, but the fexians joined the Imperium in the war. This turn the tide completely and the war ended with an Imperium victory. Initially however, the fexians were not liberate since the Imperium was not directly ruling over the country. It would take a few months later for them to be emancipated.   Now they live in free, but certainly not equal in Sor-Ta Empire society. However, they would make great strides towards equality, but this would be hampered by the Narigita at every turn, but someday there might someone who would change that.

The Narigita have enslaved their people for generations until Aulus freed them and conquer their nation. These snake creatures used to eat their children as delicacy, so as a result the other races were angels in comparison.

Human - They've been around for years and only now helped us because they are trying to promote "unity". Why did they liberate us earlier when they still were preaching this ideology.   Wolvan - While they have been allies with the humans, we can't judge them for what their friends have done. They have been kind to us.   Narigita - Filth! We can't stand the sight of them and their superiority complexes.

Dwarf - They tend to be kind to us. Compared to others.   Orc - They are allies with the Narigita. They have no moral compass to guide them.   Griffirca - We want to have good relations with them, but they seem to be very cold to us.

Otterun - If only we could have met on better circumstances. We could have been great allies otherwise. They have helped us escape slavery, but they are allied with the Orcs...   Melfloor - They are quite odd aren't they.

Scion - They think we are arrogant because of our new freedom. What do they know, they didn't bother to help us when we needed it.   Aravitourus - The only race to actually respect us for who we are.   Elf - Even though they had slaves in the distant past, they surely have learned their lesson. As such they are helpful towards us.

While I've never left the Imperium homeland, the fexians are quite powerful magic users. I hope to some trade some tips.
— Archivist Renna.

Scientific Name
Spiritualium Vulpes Sapien
Lifespan
60 years
Average Height
Males: 5'8" - 5'11"   Females: 5'7" - 5'10"
Average Weight
130 lbs
Average Physique
Below average physique. They have never been the top of the food chain in their region. Most creatures can over power them in physical combat. Glenhook 3/10