The Aravitourus are the people of flight and thought. People generally refer to the Aravitourus as Aravita (ara-vi-ta) or the Ara (ara). Their generally curious nature of how people live has made their culture a focal point of their society with little added touches from all walks of life.

They are medium sized avian biped. The Aravitourus are lithe in frame compared to the other races and are noticeably lighter. It's noted that they evolved from birds which is assumed due to their beak, feathers, and eyes. Their arms were once the wings that they flew on, but now work as both arms and wings. This allows them to fly from a short time but some distance.   Their bodies are covered in colorful feathers. The feathers themselves are alive for a lot longer compared to other regional birds. Aravitourus molt once every two years. This process is the only way they can produce new feathers and thus their feathers are quite important to them. If the feathers were removed their skin is usually pink and fleshy. Their skin will get cold and hurt easily if not covered in something soft.   Aravitourus height is taller compared to many other races. Males will be slightly higher with 6'1" - 6'3" while females are generally the same height or smaller with 6'0" - 6'2". Both sexes are around the same weight with the only change being in the weight added only by height. Most of their weight is in their arms due to the required muscles to give them lift.   Sexual dimorphism is not present and it's difficult to distinguish between the sexes of individuals.

Any pair of Aravitourus can only produce one egg per union. After a month of gestation, the egg be produced and must be cared for for about another three months before it hatches. The mother after birth goes through about two years of recovery before she can bare an egg again.

There are four main stages. The first stage is the Chick stage, this is where they are most vulnerable. They are only about a foot high, very little dexterity, and defenseless. Eventually near the end of the stage, about at the age of ten or so, they molt, and grow physically and mentally within one year.   The second stage, is the reproductive stage. For about ten years they will be fertile enough to have chicks.   The third stage is adulthood. While not in the sense of other races, this stage competes their mental acuteness and fills out the rest of their bodies. They will be at the peak of physical fitness under this stage.   The last stage is called Dew Feather. In this stage, old age sets in and their feathers begin to become moist and slimy. They become extremely sick before pasting away. The sickness is not contagious and only affects the elderly. Once this sets in they die within about a year.

They are one of the few races that are a true omnivore. They can eat all types of food without sickness. They do prefer fish the most.

The reside on the The High Throne Mountains and the The Great Reaching Woods. This is believed to once have been their homeland before their civilization's collapse. Now they tend to stay in the old conquered cities the Imperium conquered and try to stay out of the politics of the empire.   Some leave to explore the world, but find they can't travel far due to the Imperium's restrictions on flying. This keeps them on the same continent and rarely leaving.

They are just above average of intelligence. While they are not impressive, they tend just to be a little bit ahead. From examining the old structures form their great cities, it shows they have a niche in architecture and medical sciences. Under the Glenhook scale 7/10

While the usual set of sensory features are with them, their eye sight is exceptionally acute. It's described as a function of the eyes to adjust to different distances to give a more clear image.

The names are made from the old language of the Venla, the native language of the aravitourus. However, the means have been lost to time. Here are a few examples.   Male: Riss, Leyan, Pinca, Errawa, Ellus   Female: Sorrna, Wilith, Vena, Bornre

Gender have been split up into a few different ways. Some follow their biological preferences while other may believe they are the opposite sex. This leads to same sex couples, but they no longer are consider their original sex, they are the masculine or feminine version of their sex.

Surprisingly they look at the personality of an individual compared to their looks. Each individual would have a fondness to a certain personality and their affection would be brought on by it.   In this manner, each individual searches for their perfect personality that they find attractive. Only they find it they tend to attempt to court their "soul mate". While this doesn't happen perfectly, usually one is more happy over the other.

At one point a powerful society, it fell during a calamity to their great cities long ago. Now they are have lost everything and live among the Imperium as citizens.

A slight bow when greeting a friend is important. Touching is conformable towards anyone they know.   While in a romantic relationship, a deep embrace is used. This the exception to the rule on touching. a physical embrace is a private and personal endeavor.

Their original attire has been lost to time. Now they wear typical Imperium garbs or wherever their currently living.

While most of it has been lost, the remains of their cities depict large towering structures with vast transportation networks without magic. Their society was a very magic-less race.   Dance has been a staple throughout their society and even today. They see it as a form of expression that when practiced can express and convey may feelings. Some take a different approach such as combat. In such a scenario, it appears as more of martial art then a dance, but to the unknowing eye, they would appear the same.

Races in the sky are casual fun among many of the younger population. It's though that this was once a proper ceremony, but it was lost to time.   Fairs and Festivals are common, so that they may discuss and preform their crafted arts.

The aravitourus were beginning to establish themselves by the end of the Never Ending Crisis. Unlike many of the younger races, their people worked together from the beginning under the Yuigary Empire. Magic has always been a powerful resource that was fixed upon living creatures. They sought a way for tools to use magic to like themselves. This would be the first time in known history that technology was a priority over magic. However, this fascination was not with the innovation, but the use of magic beyond casting. They wanted devices that could change the magical world not the natural one. For a time, they succeeded. The elves were extremely envious of their progress. Conflict was inevitable as both of their borders began to connect. 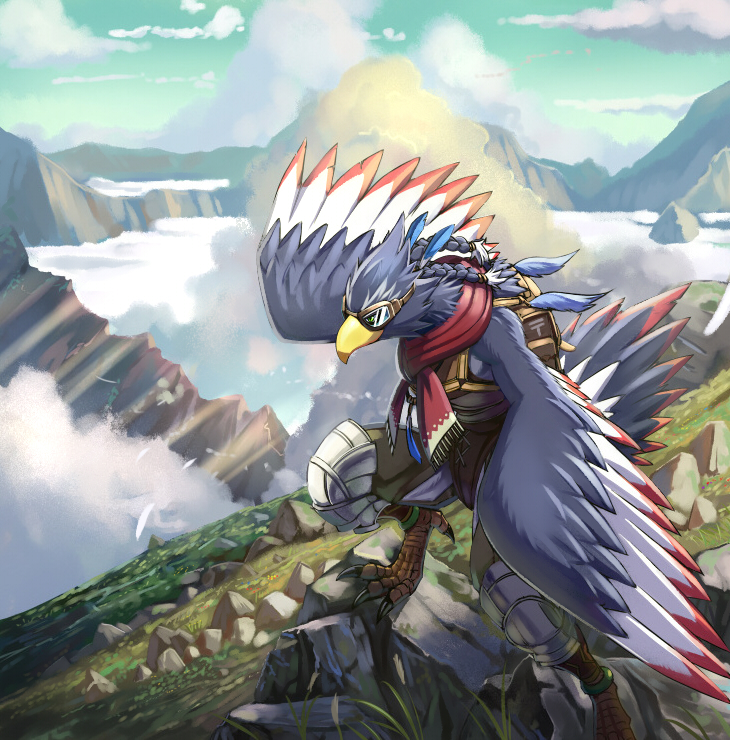 The War of Powers began when one of the elven diplomats was killed during a malfunction of one of the aravitourus devices. It was a war of flying machines and Destructive Towers. The war lasted for years, but till has been record about the actual events. Its suggested that the elves won the war and gained present day Areus Moor Plains and war reparations. The ending result would begin the end of the Yuigary Empire. The debt hurt their economy and began a downward spiral.

With the human populations organizing and liberating themselves from aravitourus control, it wasn't long before conflict ensued. During this time, many of the aravitourus war machines were dominate due to the vast amount of resources they need to power them, which they lost due to their economic collapse. From nearly all sides they were attacked. To prevent the enemy from getting the up hand, they destroyed their cities and their devices. They were so successful that our expeditions have been fruitless to recover anything. Eventually the humans took over any remaining cities. However, these cities were made for the aravitourus and not for humans. Many of these cities were reduced to rubble and built atop of to cement their dominance over their people and the region.   The human kingdoms were dedicated into ensuring their control over the region. The aravitourus had been historically abusive to the humans during their reign of control and now the humans do not want it to return again. Culture was banned, books were burned, in general their culture systematic wiped out. This resulted in most forms of aravitourus gone completely from history. We now only have what remains.

The aravitourus people since the rise of the Imperium, have cultivated what they could of their lost culture. Many have turned smalls sections of cities into their our culturally significant sections for them to live. These groupings are called "Aravita Vlen" in their old language. From inns and bars to shops and stages, the areas are filled densely with culture from their past and present. The cities themselves are mostly in the northern half of the Imperium with them rarely in the south.

They are the most interested in the other races. Each races has a different culture to explore and as a result tend to have many inter-species relationships.

Human - They are bland with their idea of unity and such. Their art is unoriginal and lifestyle is basic.   Wolvan - Their art and crafts are wondrous. They make such beautiful works that should on display for all to see. We hope to learn much from them.   Narigita - While they would likely poison you in your sleep, they have great music.

Dwarf - Thier gruff personality is a bit odd.   Orc - If they supported other instead of hoarding wealth among themselves.   Griffirca - We are birds of the same flock, or at least half a flock. Our technological process combine with their unique architecture has a certain flavor original to them.

Fexian - The fexians need to break away from Sor-Ta Empire. If they did, they could really express themselves and make a part of the world their own.   Otterun - We were lucky to get a second chance. The Otteruns never did.   Melfloor - They are rocks... Not living things... Why are we talking about them?

Surprisingly they can be quite intuitive about magic.
— Archivist Renna. 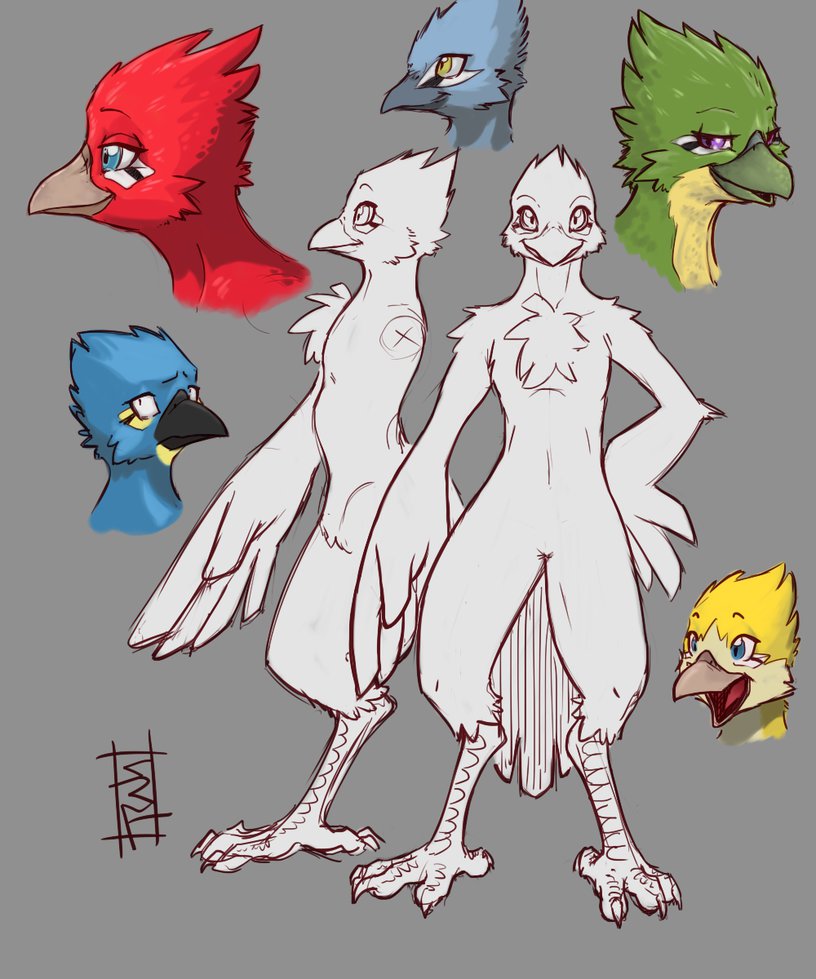 Anthro Bird Sketches by packmind
Scientific Name
Aves Volant Sapien
Lifespan
75 years
Average Height
Males: 6'3" - 6'5"   Females: 6'1" - 6'4"
Average Weight
145 lbs
Average Physique
They have an above average physique. Their wings are extremely powerful and have been known to kill people with one swing. Under the Glenhook scale 7/10.
Body Tint, Colouring and Marking
Their feathers are color with one main color, any color on the spectrum. The secondary color is around either the eye, belly, and inner thighs. They are either a main color or shares of either white or black.
Related Myths