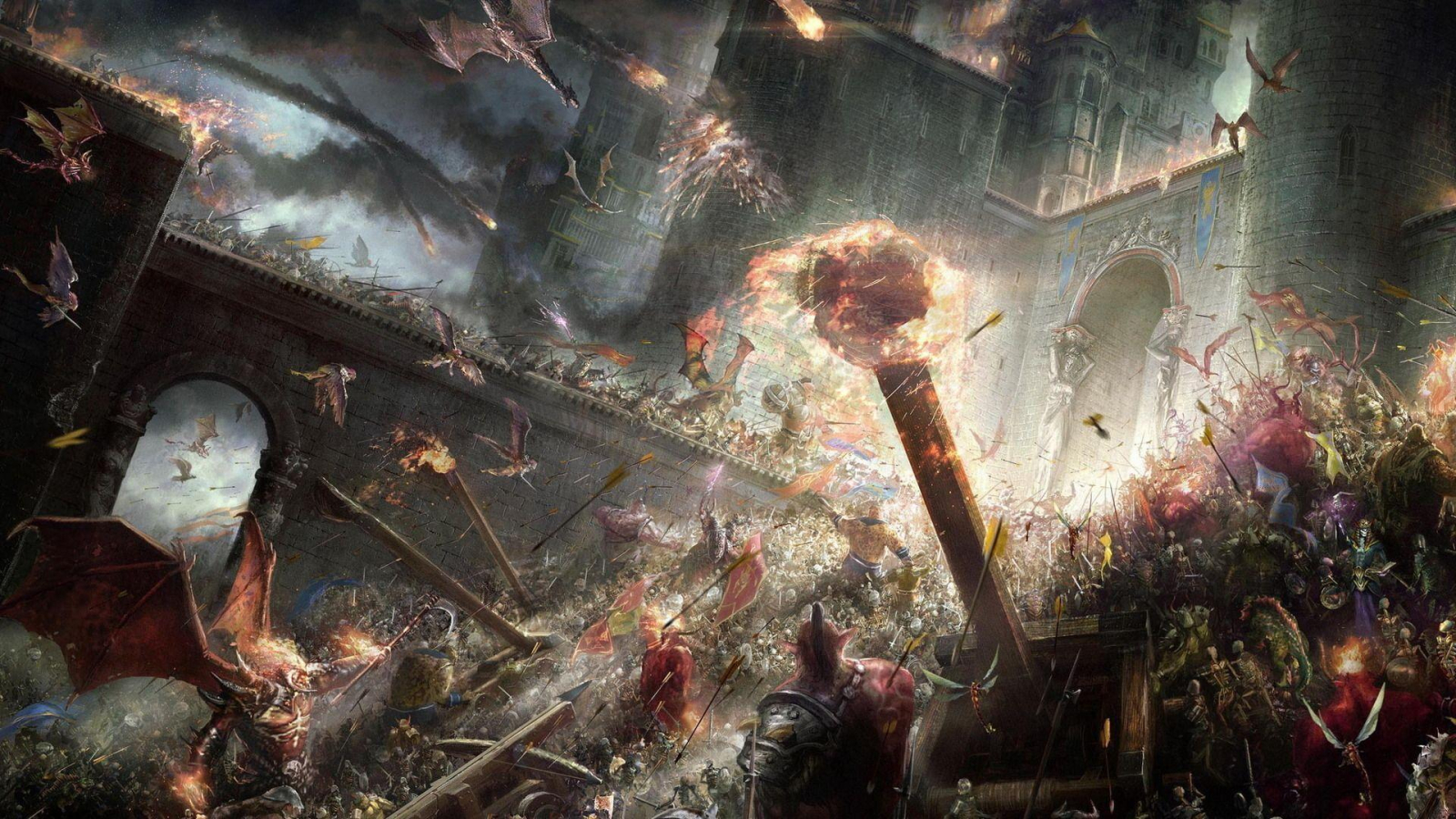 The centuries-long period of chaos, violence, societal collapse, natural and unnatural disaster and planar instability that immediately followed the Godsgate Calamity.   During this time, Glorium Hominium collapsed in its entirety as rifts to both inner and outer planes tore open all over its territories, dumping whole cities into other-dimensional dreamscapes, warping and twisting the fabric of reality itself, sending the magics that powered the empire awry in unpredictable and nightmarish ways and pouring thousands of extraplanar entities from various otherworldly realms into Eramon to prey freely upon its inhabitants.   Across the entire world of Eramon, the Dwarves retreated to their deepest delves, the Elves to their forests and the Aarakocra to their loftiest summits whilst Humans, Orcs , Hobgoblins , Goblins , Halflings and others fought desperately for survival - and died in droves. Others became the playthings of extraplanar invaders; celestials, fiends, genies, slaadi, beholders, ilithids, neogi, aboleths and countless other beings both beneficient and malicious made Eramon their new hunting ground.   The raw magical energies unleashed by so many planar rifts in close proximity scarred the land, turning the once fertile food-basket of Glorium Hominium into the blazing volcanic hellscape of Tamuz, sinking its entire southern provinces into the Silversea and reducing its magnificent capital city to a blasted, chill and haunted wasteland where nothing that dies stays dead - the The Deadlands.   These self-same energies also mutated many of the native animals of Eramon into monstrosities and abberations; only during and after this time are such horrors as the cockatrice, the chimera or the owlbear recorded in the bestiaries and folklore of the Central Continents.   It is this period when the Godsworn became subject to suffering unimaginable and scattered into small tribal communities banding together out of necessity for their own survival. As these hardened survivors weathered the storm for generation after generation, some succumbed to the dominion of extraplanar beings and became their worshipers or slaves, with long-reaching effects on their cultures and beliefs for good or ill.   More intimate pacts with such eldritch entities led to the rise of Warlocks as a class of magic-user, and to the creation of the Aasimar, Tieflings and Genasi races, now familiar, if rare sights amongst the peoples of Eramon. It is also believed that the Firstfolk became entirely extinct during this era, though whispers of surviving pockets and their mysterious artifacts do linger down among the tales of their distant descendants.   The dark age, however, did not last forever. In time the shockwaves of the Calamity began to fade, the magical anomalies stabilize and the rifts seal of their own accord. Many of the more powerful extraplanar invaders tired of their sport or saw their window of opportunity closing, and retreated to their own realms lest they find themselves trapped on the mortal plane. Others, less lucky or lacking such foresight, found themselves meeting exactly that fate, and linger still in the lost places of the world.   In time, the world fell silent, and the Age of Terror ended, though the precise moment of its ending is a matter of debate for scholars and historians. The survivors of once-glorious empires, with much of their culture, history and identity lost forever, emerged as small tribes of hunters, gatherers, fishers and herdsmen, and picked up the pieces of their world almost from the beginning, carving new names, languages and nations for themselves.   Humans, their numbers greatly reduced, spread small settlements across a scarred but newly-becalmed landscape amid the ruins of their ancestors. Others, during the worst of the Age, had fled the known world entirely and sailed far into the West in search of safer lands. Waves of refugees and would-be invaders from other shores brought the Halflings and Gnomes from their lost homelands, and the Orcs and Goblinoids invaded the Central Continents as a force to be reckoned with for the first time, though they, too, were worn and exhausted from unspeakable trauma and their failed conquest soon led to a fragile peace. The Dwarvish diaspora emerged from the depths of the earth and the Elves crept out of the forests like figures of myth, and soon all of these peoples and more found themselves sharing ground in the Central Continents of Eramon, alone, bereft of gods, but free of the shackles of higher powers to rebuild the world on their own terms.   Sporadic but localised conflicts and moments of trust and trade forged tenuous alliance between some of these new powers and uneasy stalemate between others. Over time, new kingdoms were built from the ashes; Valderia, far from the epicenter of the Calamity, sprang swiftly from the ripe fields of the western frontier, whilst the enterprising Dwarves and Gnomes soon carved Wulvaral from the mountains beneath the watchful eeyries of the Skyfolk. Explorers and seekers of the ancient secrets now buried beneath the northern deserts founded Qadoris and the barbarians of Tamuz and Kar Vreld pushed the boundaries of even the most harsh environments. The Silversea cut a corridor of trade and travel across its haunted waves and, as the last of the portals began to stabilize, the mysterious people of Sukima emerged to found their own empire on the eastern side of the sea. Where the volatile new kingdoms met and clashed, The Midkingdoms sprang up, a perpetual no-man's land where the bravest and most reckless thrive.   Only the farthest extremes of Eramon remain now unknown to settlers, but the wild Southern jungle continent of Ezzuth, untouched by the Calamity, and The Deadlands far North in its very darkest heart, remain places whispered of in rumour and song.   The Age of Terror may have passed, but its shadow is cast long over the history, geography, culture and biology of Eramon and her peoples, and shall perhaps never truly cease to linger...