The Tower of Eternal Light

The Symbol of Wealth and Power

This giant lighthouse is the national monument of Valonia Empire located next to the grand palace. It was started building in 171 BVE, on the 200th anniversary of the death of Val the Great, their first ruler. Taking 15 years to construct, the tower show the Valonian's economic superiority as it's built during its golden age.

The tower functions as a lighthouse to help guiding trader around, where the light has never died out for over a hundred years.

Serving as the tallest building in the region, the people who manage to stand on top of the tower can see the furthest town in the country, and if they're lucky enough, the range.

The tower is made of marble and granite, dividing into 3 sections:

First, the Base. All 4 sides are decorated with statues of honorable people since its foundation. Now there are the founder, the king who defend the empire, the king of profession, and the great scientist.

On the inside there are decorated with other honorable statues as well for replacement. Via the main gate at the east, citizens can come in to worship or admire those pieces of art.

Next is the tallest part, also has 4 sides which are slightly decreased in diameter on height. It has less decoration and design on each side, with only small windows are shown.

Finally, the top, where everyone is working to maintain the light. The actual lighting source is presenting under the 4-pillars pavilion with the Emblem of Val on its tip.

As it took 15 years to build, the base was temporarily used as a legacy monument, by placing statues of honorable people or statemen inside.

The light came from the top-opened furnace on the third level. Every day, all workers had to carry charcoals or timbers to the top and refueled them to keep flame consistently. It can be turned off(covered up) by vertical lift mechanism.

The fire has later been replaced by a new energy source that has specific characteristics; the ability to glow, and its non-flammable. So the tower can shine on its own without much maintaining, and thus fewer workers.

However, fire is still the essential part as Valonia's research department find out how to catalyze crystal and make it brighter. By burning on any surface, just like metal, it will balance the illumination.

The fined rectangular crystal prism is installed on pulley lift, covered by the box of glass to prevent from shattering. It's placed above the improved furnace that smaller but still provided a strong flame to keep the prism shining. The top is also renovated by covering up with glass pane and roof being drilled to take away the exhaust.

The fire has been extinguished a few times, mostly by cruel weather. In contrast, the top used to be burnt due to furnace failure from an uncontrollable flame. However, on 30 BVE when the Valonian lost the war to the rival empire called Kritus, the tower has been forced to stop working - for the first time in history.

Fortunately, after the victory over the empire 30 years later, the tower was functionally back to work again and still shine to these days—thanks to the amethyst of god. 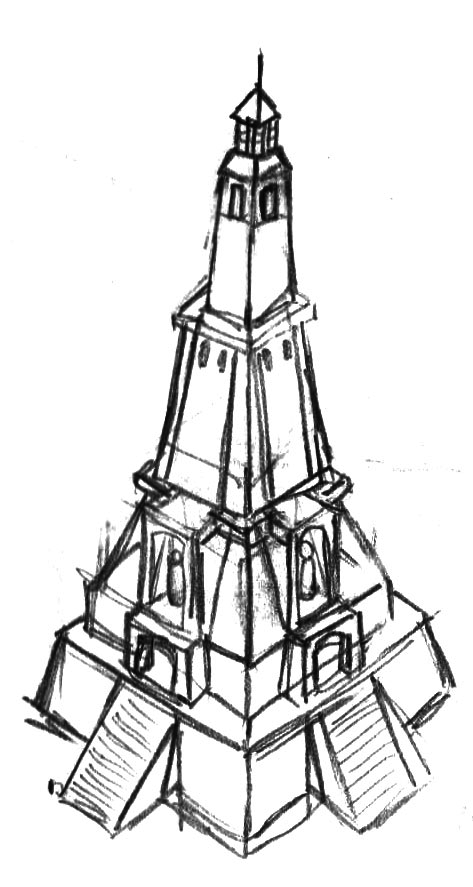 Articles under The Tower of Eternal Light

The light and hope in the heart of Valone

Nice and interesting :)   The space in the beginning of new header parts looks a bit odd and it's not consistent throughout the article. I'd pick one approach and go with it so it has a nice, uniform look. :)   Keep up the writing!

Thank you for commenting, i'll try my best :D

Ganbatte! You can do it! :D

Lovely article!   The drawing is a very nice touch ^-^

I have to say that clicking on your profile to see all your articles was such a ncie surprise. I LOVE the sketched art style of the header images! I really like the idea that the basement of the tower includes many seemingly random statues, only because it had a different function for a while. That must be a very surprising room to enter :D

Thank you! and I love your artwork too! :D The idea of a basement is quite interesting than I thought. Maybe I should add more detail to it. :3

Thanks! Yes it is! I never heard of something like that and a hidden gathering of historical statues of a decade can be quiet valuable for future generations. Especially since they're so well protected! It'd be interesting to know what the most visited/interesting sculptures are.

I love the drawing. Now I know what it looks like. I also like how the light was upgraded with the addition of a crystal. I already gave you a like in the past, otherwise I would give you one now. :)