The big all-teeth-no-bite scavenger of the archipelago

The main big-scale scavenger of the archipelago is a creature of terrifying aspect but inoffensive behaviour known as hirschmall or waste-of-flesh, feared by children and city folk but mostly ignored or even considered a nuisance by adults.

Hirschmalls are tall, very scrawny creatures, with hairless smooth white skin and long legs and neck. They have two spiky protuberances on either side of their tail they can use for defence.   Behind the neck, they have three spike-shaped bony structures connected by saggy flaps of skin to each other and to their front legs. When they feel threatened, they extend the skin flaps downwards and raise these spikes, making them appear much bigger and more intimidating.

The face of hirschmalls is perhaps their most distinctive trait:
They have a long snout that resembles a bare skull, as their nostrils join slightly in the middle and extend backwards.   The external part of their mouth has the front teeth bare and joining with the skin, while the sides of the mouth are covered on the outside by a series of hard square-shaped fake teeth that aid in ripping apart the carcasses they consume, with their black lips running under those formations, and their real teeth inside.
Hirschmall's eyes are yellow and already very big, but they look even bigger as their black eyelids extend to the side, and are joined at the top by an expressive brow ridge. Their black eyelids, lips and gums all add to their heads looking significantly like bare skulls.   All hirschmalls have a set of many horns of different shapes and sizes, some curved, some resembling fins, some forked, occupying most of the back of their heads. Each individual has a different structure of horns, making them easy to tell apart from each other.

This creature is spread across all islands of the archipelago, occupying the entirety of the non-mountainous areas of the central islands, and taking vast areas of the peripheral ones.   The biggest area without hirschmalls is the hot and dry grasslands and deserts of Karte, though they can be found in the Chalk Expanse.

Dhalmain Island by Naelin
It is thought due to their colouration that they may have originated in white forests and spread since thanks to their success as scavengers, though their name suggest that they spread from the island of Dhalmain.

Hirschmalls are scavengers that can travel long distances in search of carrion. Though they are pacific and timid, they have been seen stealing the kill of predators and swiftly running away.   Since meals may be scarce and be stolen for them, hirschmalls can eat enormous amounts of food at a time, as their stomachs can expand several times their normal size.

Hirschmalls reproduce every two years and may have between 2 and 5 cubs per litter on average, giving birth to live young.   A female will find between one and three mates either in her group or by following the calls from males.
The males she chooses will mate with her several times and will help raise the babies for the time it takes them to become self-sufficient, regardless of who sired them.   Some of these males may stick around for more time, sometimes multiple years or even lifelong, fathering and helping raise more litters through the female's life. In some cases, small groups of hirschmalls are formed by two or three females and their partners. 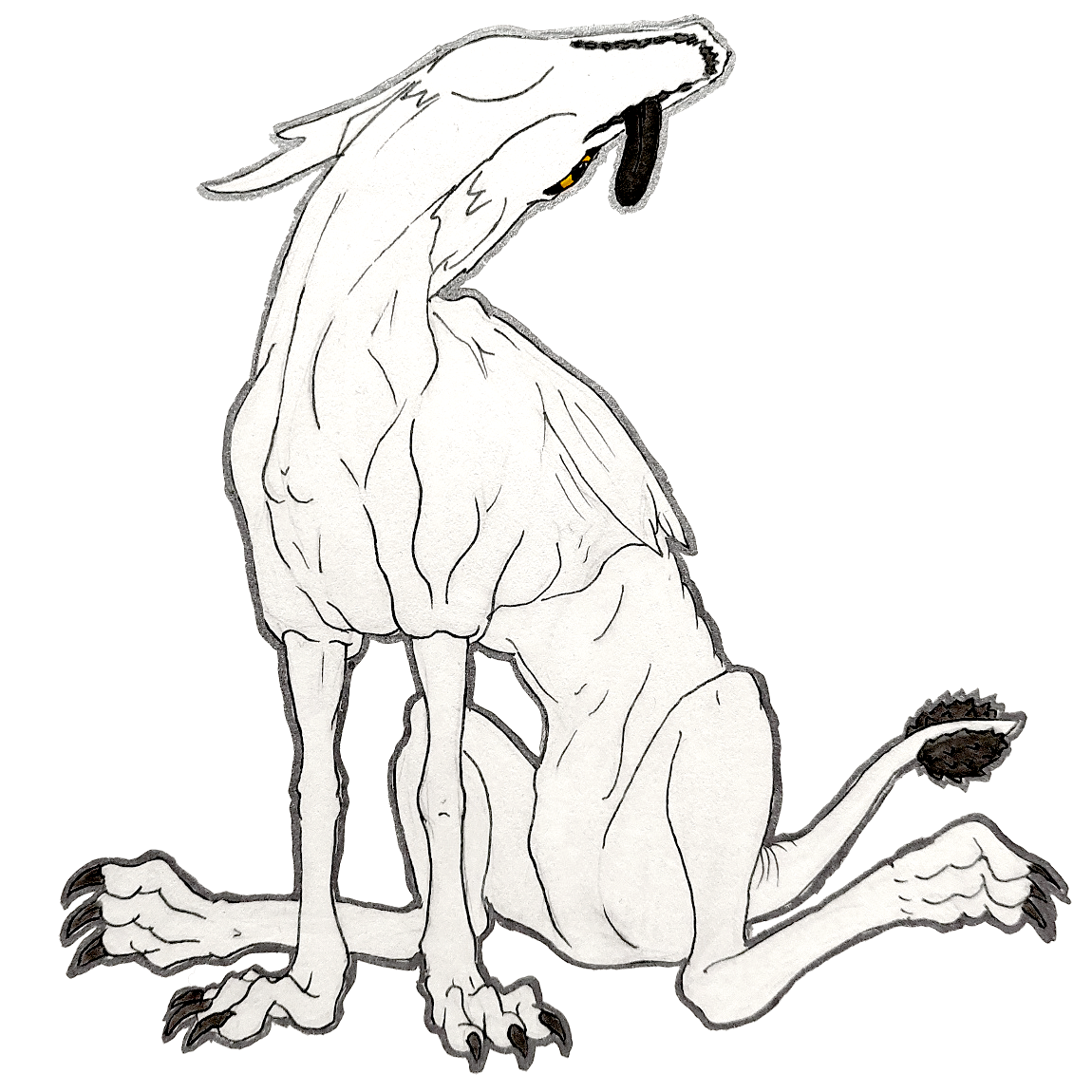 Silly hirschmall by Naelin
Hirschmalls are well known for their very skittish behaviour. They are timid creatures that run away as soon as their intimidation tactics are seeming to fail. The way their scary aspect and big size combines with their personalities have earned the unflattering name of "Waste-of-Flesh".   They are anxious creatures, but they enjoy calm company and become very clingy and affectionate if someone has bonded with them.   They may live alone or in groups of several individuals, either some females and their partners, young siblings or bachelor males. 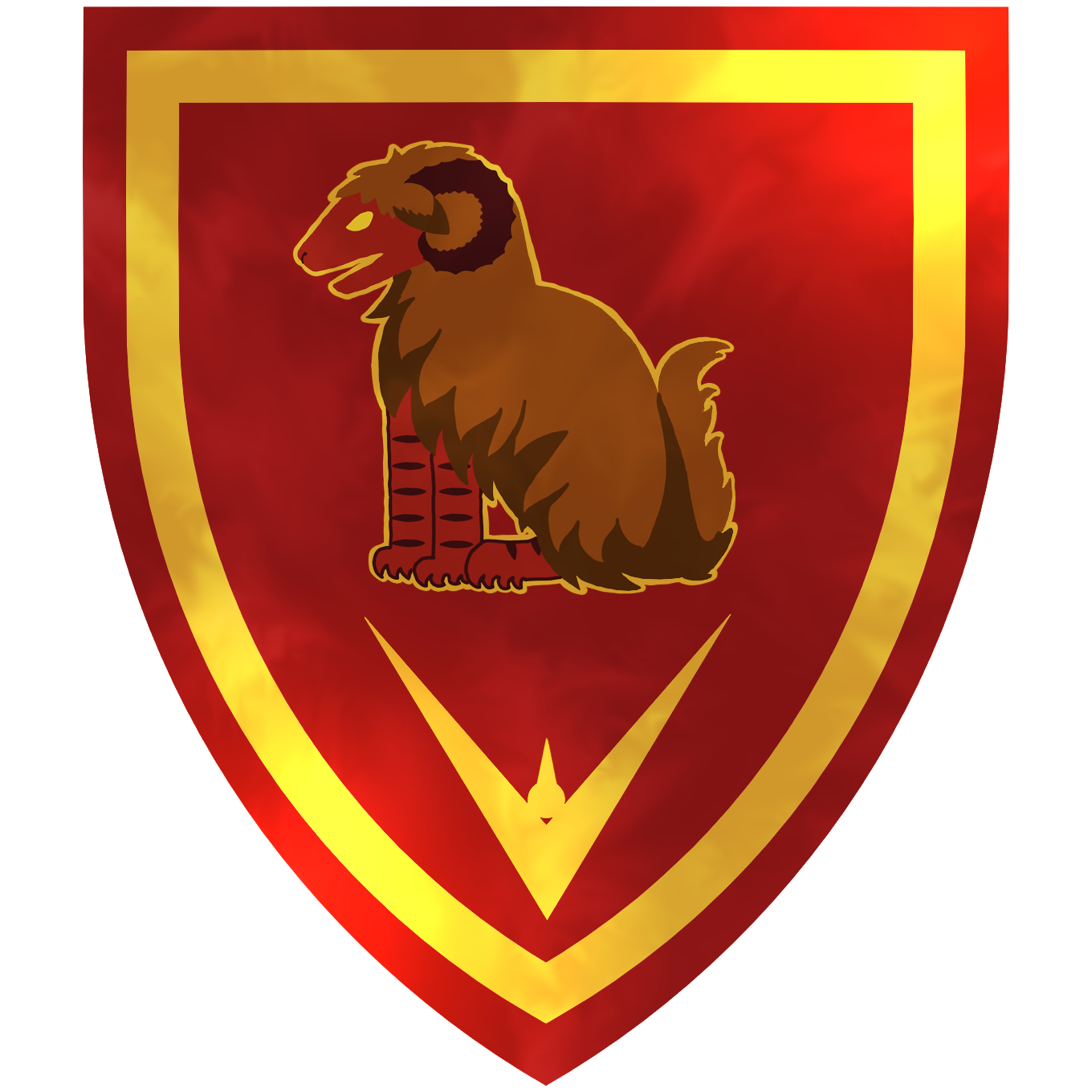 Shield of Thaur by Naelin
Most societarian groups consider the wastes-of-flesh as their nickname implies, and either ignore them or try to drive them away for considering their scavenging a nuisance.   However, the newly formed Kingdom of Thaur with their "Every bridge can be crossed" policy has made a pact with hirschmalls in order for them to clean their fields and settlements of carcasses without being disturbed.   Despite the Thaurian's initial reluctancy, it has proven itself a great aid for cities and big farms, as the farmers now lead the creatures to their deceased livestock instead of having to carry them away by hand or being invaded by more bothersome or dangerous scavengers. 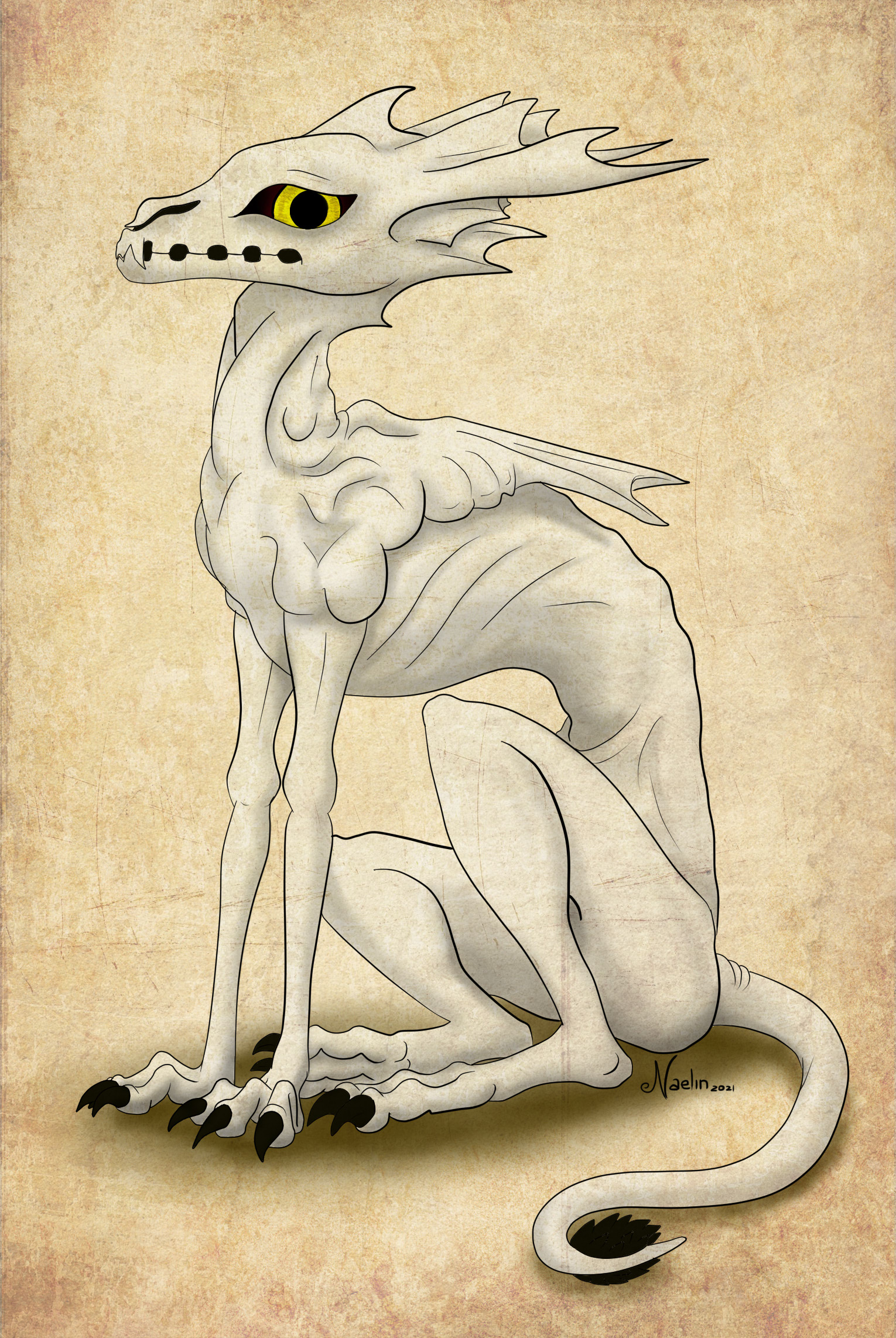 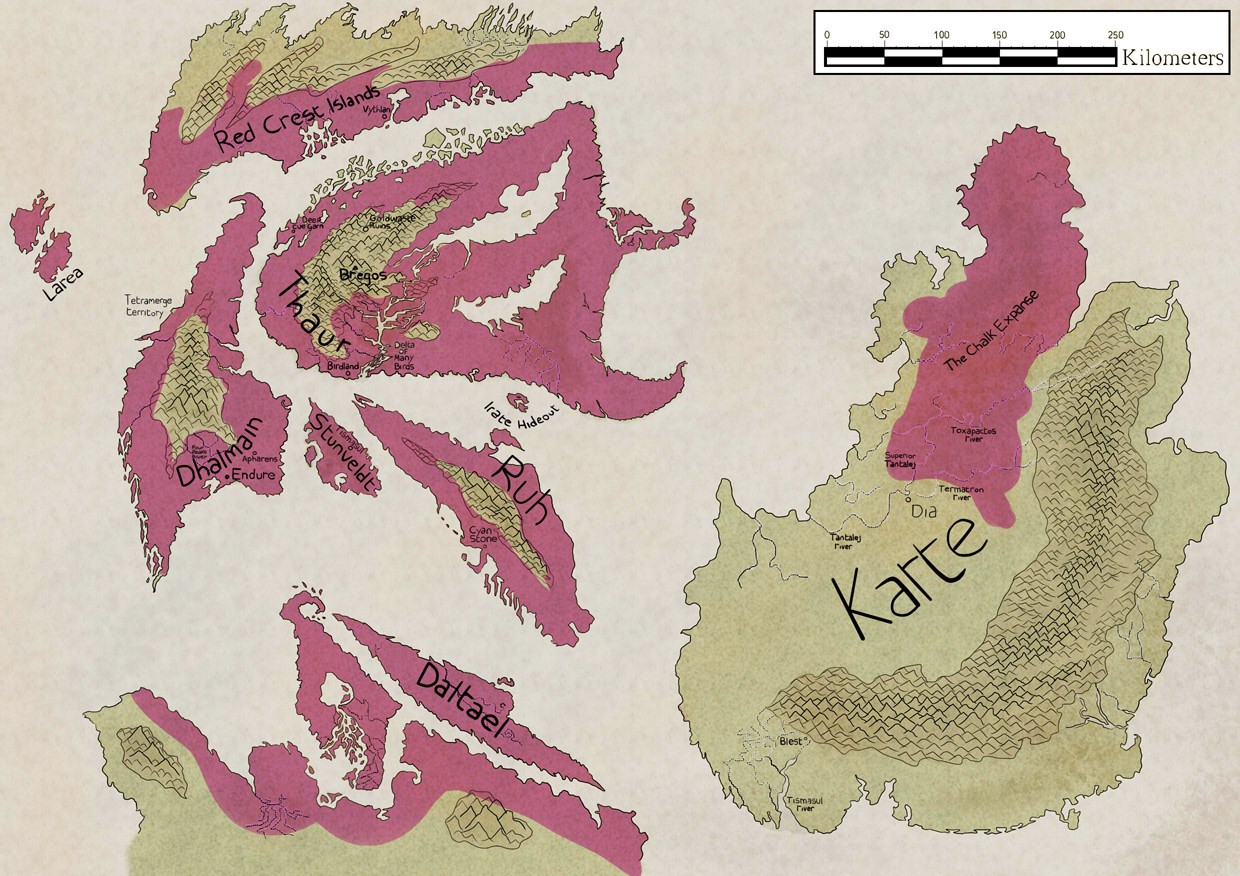 All of the text and art of Symbols of Power, including the CSS theme, have been created by David Cutuli (Naelin) unless otherwise specified.
All of the art and content attributed to the pseudonyms of "Welkinal", "Danae" or "Veld" have been created by David Cutuli (Naelin).
SoP theme song composed and interpreted by Lu Cutuli. | SoP logo and Out of Universe logo created by TJ Trewin. | Open paper texture by Markus Spiske.
Huge thanks to TJ Trewin for his help with SoP's css theme design.
Article template
Species
World
Symbols of Power
Category
Pactual Species in Creatures
Author
Naelin
Publication Date
20 Jan, 2020
Creation Date
5 Dec, 2021
Last Update Date
8 Dec, 2021
Visibility
Public
Views
354
Favorites
20
Comments
5
Tags
Species English WE2021

Are these SoP equivalent of cheetahs? I can imagine them doing the scaredy cat jump. Can I adopt half a dozen?

In the anxious longboi sense, yes. They are scaredly kitties. If you have bonded with one they WILL try to nap on top of you.

I love this good boys and I love that the kingdom of thaur found a place for them :D

They're so cute! I really like their aspects and the illustrations you've made are amazing!   Are they clever since you said the societarian have made a pact with them? (Or is that even the case for all of the animals in your setting and that's why you didn't mention it?) How do they communicate with people/what kind of sounds do they make?

In my setting, there are many (but not all) species known as "pactual species" that can use a rudimentary non-verbal language to communicate with each other just enough to be able to establish some diplomacy in the form of pacts (The complexity of which IS limited to the species' intelligence)   Hirschmalls are pactual and quite clever, though not incredibly so. Enough to get a sort of "we put the bodies at your reach and you don't create messes around us" deal. These mundane pacts, though, do kind of imply allegiance to one "side" of the societarians vs tetsus feud, so it makes sense to try to get as many species on your side as possible.   (I really need to translate the "pacts" article soon)

Anxious babies! <3 I would give them scritchies. I love the drawing of the one being silly. :) I also really like how you included a map of their distribution.

I love these guys, and your art. They seem like such sweethearts and I want one (or several). <3 It's a shame some consider them wastes of flesh - their loss.