Monorik is a gas giant, twice as large as Ondor. The gas giant itself isn't of interest as its mineral rich moons are. As a result, a cluster of mining colonies inhabit many of these moons, all belonging to groups in the Mining Guild with security hired from the Hutt clan, Clan Bareesh.

Monorik itself is nothing more than a large ball of corrosive gas. While it has some useful gases, the acidic nature of the atmosphere prevents mining it.   Around the world are seventeen moons, all rich in their own mineral deposits and in some cases life forms. Along with the moons is an unusual cluster of asteroids known as Spacer's Tears that orbit the world as a collective 'moon' all their own. 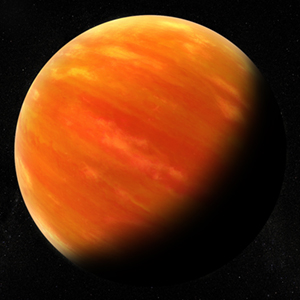 Tweet
Star Wars TM & © Lucasfilm Ltd. Tapani Sector created by West End Games for Lucasfilm. No infringement is intended or implied. Unless otherwise stated on page, all other artwork and content are © CB Ash and Jarissa Venters, 1998-2020, All Rights Reserved.