Téri vaŋ, kadaš syi kátlep?
I think I said that correctly... you understood that, right?
— Sister Hämarik to Brother Koit

Vuonian is a language that was spoken by the Aeth of Vuonampi. It split off from the other descendants of Proto-Aethic after the region was conquered by the Pijari. Over the centuries the usage of the language diminished as the natives assimilated into Pijari culture, eventually leaving the tongue to the ash heap of history.   Centuries later, the Sons of Taepke, a militant holy order of the Followers of the Oakroot, underwent efforts to resurrect the tongue. They hoped to use the dead language as a way of hiding the contents of their messages.

Spoken primarily around the lands that surround the modern-day town of Vuonna, the local Vuonampi dialect branched off into its own language due to a lack of contact with the other Aeths. Pijari rule over the land forced them to distance from their northeastern brothers, resulting in the birth of a language.

Under the rule of their foreign overlords, the Aeths were at times forced or heavily encouraged to speak in Baekish, the tongue of the northern Pijari. Over the decades, more and more foreign words ended up in the everyday vocabularies of regular Vuonian speakers.   By the late 1st century BU, many young Aeths in Vuonampi had grown up alongside Baekish speakers and their mastery of their native tongue diminished. A sizable portion of those young people would go on to teach their children the language of their overlords, deeming it more useful than their dying mother tongue.   As the number of people who could fluently communicate in Vuonian declined, the value of the language lessened. Eventually, around the year 1 AU, the last few speakers perished during a smallpox outbreak.

Centuries after the language's death, when nearly all but the most learned of historians and linguists had forgotten its existence, Vuonian was resurrected. Uku Sihas, a man with an intense passion for everything related to lost history, stumbled across a book by a foreign chronicler. The dusty tome contained so much information that Sihas figured he could use it to resurrect the language.

The entire resurrected Vuonian language is based off one book by someone who remains mostly unheard of in Pekkola. This fact has left some to wonder if the new Vuonian is even vaguely close to the original tongue.   Sceptics of Uku Sihas and his language argue that anyone could have written up some random rules and words and named it after a dead language.

The longer he studied the book's pages, the more he had begun to fear that the existing vocabulary presented there was insufficient for a full language. He deemed the complete revival too time-consuming and decided to repurpose Vuonian into something else.   Sihas was also an influential Son of Taepke, and so he proposed to their leader that the language could be repurposed to their benefit.
The leader of the militant holy order found his idea of using a dead language to deliver secret messages a ridiculous waste of resources and rejected Uku's request. Disgruntled by what he saw as a great injustice and a waste of an opportunity, the adamant linguist sought new ways to fulfil his objective.

Uku Sihas kept studying and developing Vuonian until 282 AU when the old master of their order met his end. As one of the senior-most members of the organisation, Uku was elected to lead the Sons of Taepke. With the additional power as the grandmaster of the order, Sihas introduced the resurrected language to his subordinates.

Due to a lack of words in the original vocabulary presented in the book, the Sons of Taepke had to come up with entirely new ones that would allow them to communicate without having to switch to their native tongues mid-sentence.   Vuonian borrowed most of its new words from Aethish, but they were deliberately changed enough so that an Aethish speaker wouldn't be able to understand the similarities.

Whisper only in Vuonian when discussing matters of the order. You are free to talk however you wish in casual discussions. Just avoid raising suspicion and pretend to be from abroad.
— Sister Siirkka 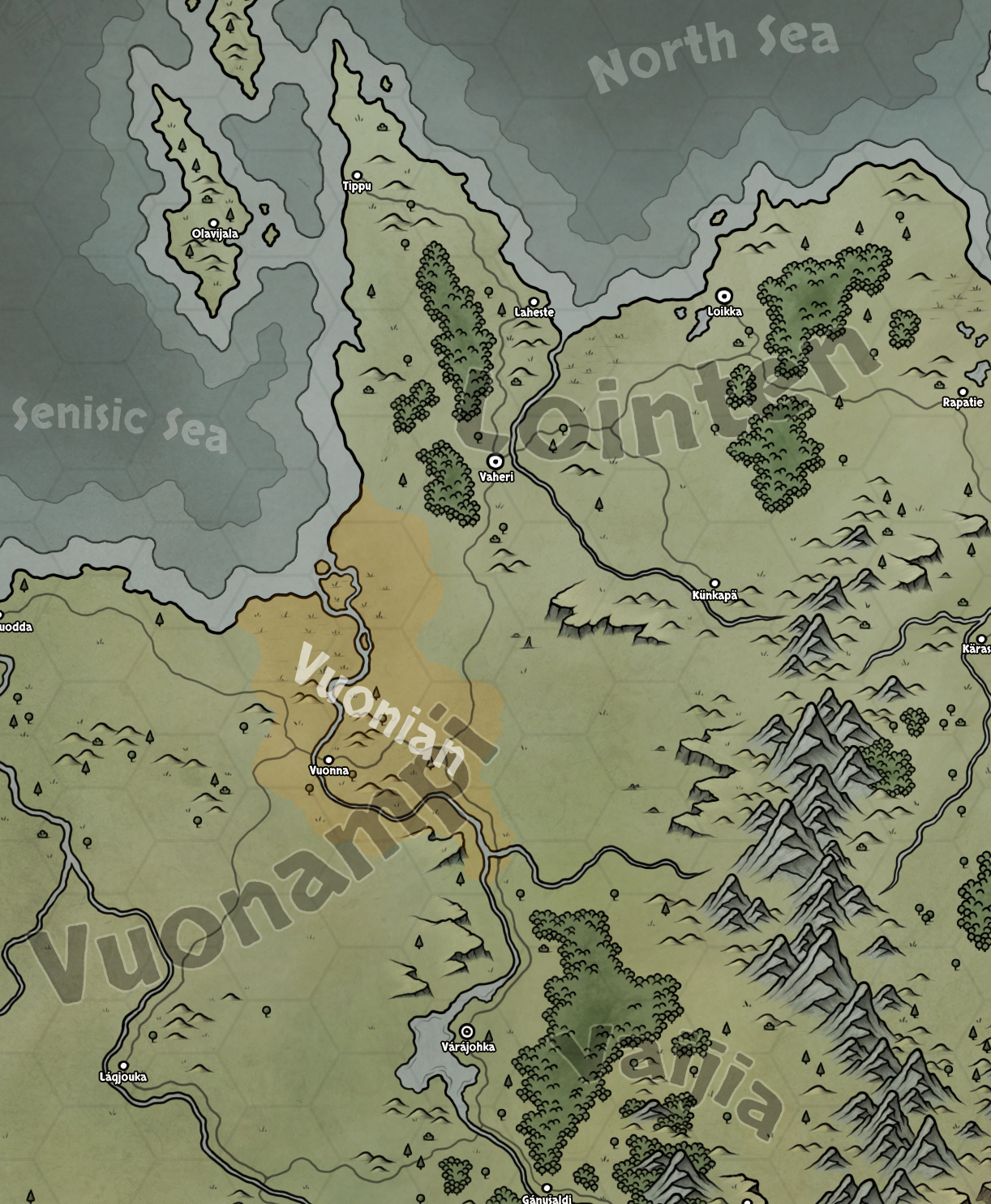 I am so jealous of your maps. :D They are so pretty! And what an interesting article. I enjoyed the read very much. I think I might snatch the blocklink to add it to my list of favorite Summer Camp articles.

Glad to hear you liked it! :D   Feel free to loot and plunder my blocklink

Aside from the Maps ( which I *wish* I could get mine to come out this nice! ) ... I love the progression and flow from living language, to dead language, to secret language!

Great Article,i really liked.   I know both of the above mentioned the maps,But they are pretty awesome..   Aemon

This is such an interesting response to this prompt. I love the idea of a dead language becoming reinvigorated and gaining new purpose, even if it is not entirely accurate to the source language.   It's sad how this happens to languages in real life. :(