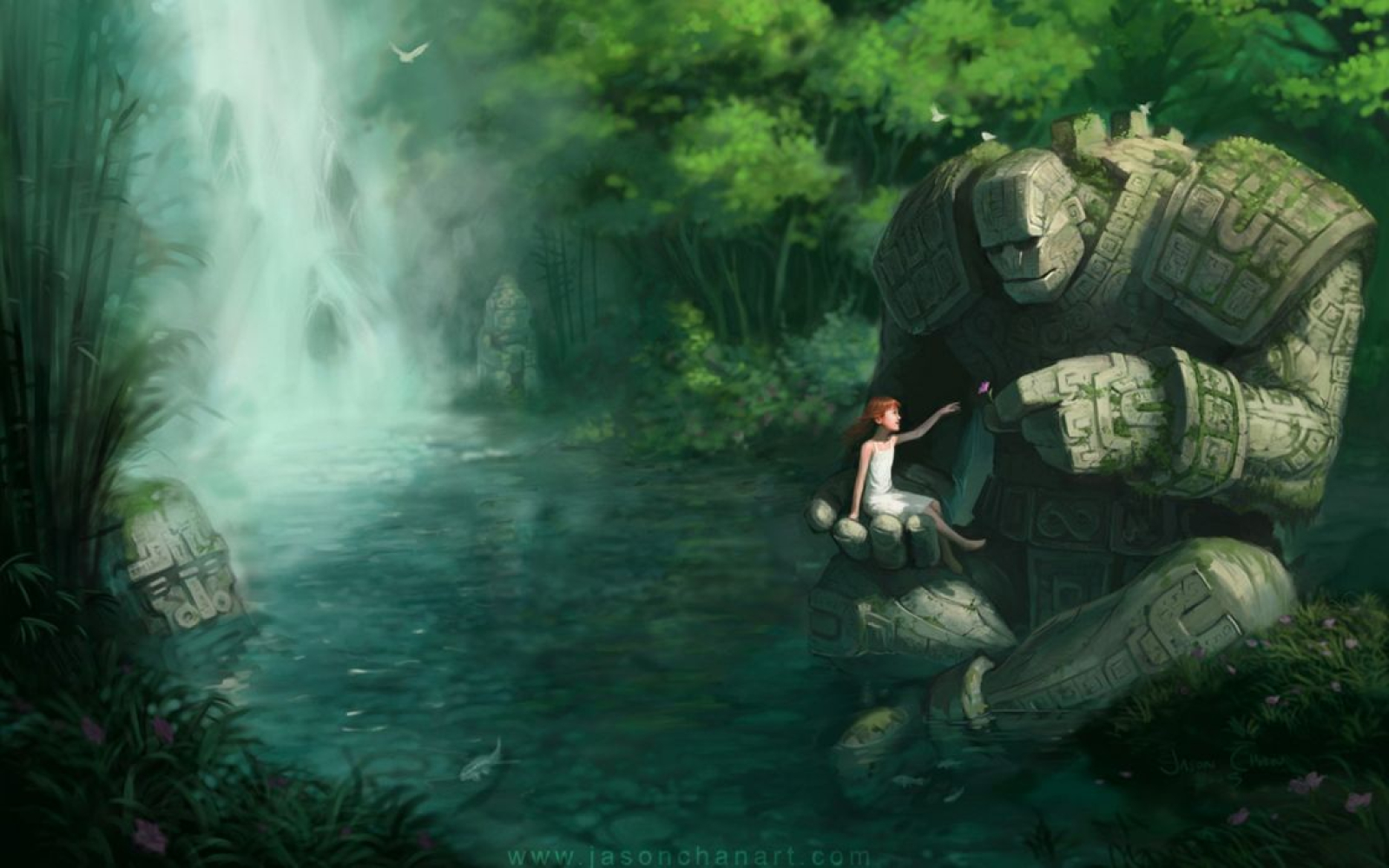 Golems are the culmination of millennia of magical research, and today form the backbone of modern civilisation. The present age of the world is sometimes called the Age of Golems, for their influence is so great.   The modern golem was invented by the Collegium of the Arcane in Juventius City, in 2899 YSB. Though golems were recorded far earlier, with the Aeondra of Meos Soaer holding particular affinity for them. The Statues of Anoixte are some of the most ancient golems known, and their defence of Meos Soaer during the Suran invasion is legendary.   The modern golem achieved several factors ancient attempts never managed; the Collegium managed to create a golem that was easy to manufacture and could be independent from their enchanter for long periods of time. This discovery allowed them to be put to work in every aspect of modern industry.

The invention of the golem changed technology upon Macalgra. It was however not a peaceful process. With a golem, farming could now be performed with only magical oversight; mines could be operated without risk of endangering human life; major projects such as highways, shipbuilding or fortification could be undertaken with no need for human labour beyond mages. It simultaneously made mages even more essential to the modern economy, and displaced the average man.   The institution of golems allowed most nations to produce massive food surpluses, and suddenly rendered food exporting nations such as the Sarimarcus Empire superfluous. The Adi Reven decried golems as evil corruptions of the mortal image, and followers of the faith destroyed many in Sarimarcus. The ruling dynasty was ousted and the empire's western colonies declared independence.   The Sheven Empire collapsed after attempts to ban the technology backfired, only leaving its rulers at a disadvantage, and machine breaking riots broke out in the Sura Empire, Liang, and across many other nations. International trade was devastated for nearly a decade; the value of many goods was left in perpetual free-fall. Countries that could supply Vis crystals found themselves able to ask any price, while nations that exported luxuries, food and raw materials were left unable to compete with the new cheap labour available domestically.   Among extreme unemployment in the empire, in 2912 the Temple of the One and Six Gods helped to establish the Hegshma - a basic living for all citizens of the Sura Empire, paid for by the government treasury. Ytherin was quickly adopted as a currency, after traditional gold and silver was devalued by new golem mines and magical reproduction.   As this new economic structure spread across most of Macalgra, it changed the shape of politics and economy. The leisured middle class suddenly included most of society, and the numbers of academics, artisans and service-related workers swelled drastically. The new medium of trade was information and luxuries; everything from exotic spices to fine pottery, enchanted objects, rare jewels, Vis crystals, Pracina wood, handcrafts, services such as meals and entertainment. Employment was far from eliminated, but the areas in which individuals worked shifted drastically.

Golems are manufactured by many producers today. They are simple to produce once the knowledge is acquired, requiring only raw material, Vis crystals, and a mage with knowledge of enchantment. A body for the golem must be constructed, out of chosen material - though clay is used very widely, for it is easy to acquire and repair. In the body, a number of Vis crystals must be suspended, charged with Aether. The number depends on the intended battery life of the golem and the complexity of magic it will need to perform. The body must then be enchanted with the spell, which may take up to an hour of spellcasting - the enchantment used is actually a number of components layered upon each other, operating in tandem.
Access & Availability
Golems today are almost ubiquitous across Macalgra in any advanced nation. They are used in factories, to manage agriculture, in building and construction, as soldiers, law enforcement and personal security, and much beyond. Though most golems are humanoid, they do not necessarily have to be. The very wealthy use custom golems as personal transport, and Juventius City has a tram network operated by golem-trams. Golems require regular recharging by a mage, so access to them is most common in areas with easy access to powerful magic users.
Discovery
The Collegium had attempted to study golems for several centuries, almost from the academies founding. However under the leadership of Manirex Bellius Tettidus the academy received significant support for the research. The Aeondran mage Feo Nalh was granted leadership on the project, the first Aeondran to hold a faculty position at the academy. Feo pioneered the writing of a complex spell that would enchant golems with intelligence and independence, and a new process of embedding Vis crystals within the golem's body to charge it, instead of creating an Animus and implanting that, as others had attempted.
The Arcane

Answering: "Describe one technology which fundamentally altered your world."
Visit XanthussMarduk's Competition Page Check all other answers to this prompt Competition Homepage

Question: How are your Golems powered? I am asking because golems can be a very "broken" thing in world building because they normally require nothing and can work ad infinitum.

The crystals inside them require re-charging by a mage periodically. I should definitely note that. Good point. They are somewhat 'broken' in many ways, I will admit. Ademal, and Janet's LostKingdom article about the Porcelain Argument put me onto the vein of: What if magic replaced just about every aspect of modern technology in my world? Golems are a big part of that.

I LOVE Golems, and since reading the Discworld novels, I adore hearing about their application to industry. This article totally appeals to me, and the various nations response to them is fantastic. Well done!

Thanks James. Glad you enjoyed them. I must admit they are fun to build into my world.

I love the fact that you thought about real life economics and just how mass producing golem-workers would *actually* affect an economy. Kinda like how the Spanish brought back so much gold that their economy tanked. Very nice :D   I would love some pictures, so we can see what these bad boys look like!

Thank you. Wish I was more of an artist so I could illustrate them.

You mention on the side bar about intelligence, but don't talk too much about what that means overall. How intelligent are they? Is that just referencing that they can follow long term orders or is there a level of awareness as well? Very interesting tool for the people. I like how they impacted the history of the universe, really changing some major things.

The modern Golem is not intelligent. The older columns were constructed using artificial souls, so the morality of their use is questionable. I should definitely fill out more information. Thank you for pointing it out.

Is this for a game? Will they be able to make there own Golems?

Macalgra is originally intended to be for a novel, but I am also running a D&D game in the world with some friends. :) They might I suppose!

I really like how well thought out this is. How labor sources like this would impact the world. I also like the battery recharge thing, that's pretty cool. Well done.

You're welcome. Keep up the good work.

I love how you go not into just the technology but about how it would effect everyday life! A lot of people with golems this detailed seem to not touch on that.   Maybe in the future you could add a picture of a vis crystal, or a golem to help with imagining them! Good job though! : D

I should definitely illustrate Vis crystals eventually, they're very important to technology and magic in Macalgra. Just not good at art like you :P

; P I'm always around on the discord if you need crystals made! Good job on the article though, I had to read it on mobile and the PC version is so nice to look at as well : D

Thank you. If I ever get around to the publishing stage of macalgra, I'll have to commission you for some crystal art. Yours are some of the best I've ever seen.

I'm only just learning how to shade. Crystals sound terrifying to draw