Sura is as slow as the turning of our world. The giant, sleeping on a bed of silver that has tarnished in the ages he has lazed upon it. Should he awake he may find his treasures have rusted but he is still a giant we should all fear.
— Damius VI, King of Naeus

The Sura Empire is the oldest nation on the eleven continents of Macalgra. An immense bureaucratic edifice, Sura spans the continents of Terrosea and Victellus, and beyond with colonies through outposts across the globe. Its cultural influence is even wider, having at its height ruled over more than half the world's land area. Along with Liang and the Sarimarcus Empire, the Emperor of Sura sits upon one of the most influential thrones on Macalgra.   Myth tells that Surah was granted the divine city of Ryseum for defeating the demon Modum, and that Ryseum was forever blessed by the gods as long as Surah’s descendants rule. While for many centuries no true descendants have ruled, most of them have fabricated such a connection in their family tree. Sura is home to a number of unique cultures, with a storied history of growth, conquest and stagnation.

Today Sura is reigned over by its 128th Emperor, Shari. Though styling itself an Empire, executive power rests primarily with the White Senate. The Senate represents the most ancient families of the Empire and the priests of Temple of the One and Six Gods. The Senate sets the law, declares war, and to some degree oversees the other institutions of the Empire. The Ministries of State who compose the immense governing bureaucracy that regulates everything from trade to agriculture, and are filled by the senior priests of the temple. Eleven Nomarchies govern the regions of the empire. Each reason representing a once independent nation conquered by Sura over its long history.

Sura was founded three thousand years ago, allegedly by the hero and demi-god Surah, for whom the empire is named. Ryseum was a republican city state on the continent of Terrosea around 15 RC. One of the earliest advanced human civilisations had formed on the Nimula peninsula, where Ryseum was just one of many city states. Through a strategic position and early good governance, it became one of the most successful of the Nimula city states. Drawn by the wealth of the city, the Caerul tribes beseiged and conquered Ryseum in 283 RC.   Their practice of slavery throughout the following centuries would ultimately be their downfall. Caeruli leadership came to an end in 950 when the Caerul court was besieged inside the royal ziggurat by a slave revolt. The siege lasted four months before the Caerul succumbed to disease and starvation.   The Ryseum Kingdom collapsed in the aftermath, as conquered cities became independent and vassal states cast off their shackles. The slave revolt was unplanned and its members had little idea of what to do after their success. Ryseum itself was devastated by plague that killed up to 50% of the population. An attempt to stem the plague by evacuating and then burning the slave ghettos backfired, and the city was largely leveled by flames. The population dispersed to neighbouring cities and the Caeruli vanish into history.   In 1092 RC, the future cultural hero Surah was born in a village established in the shadow of the ruined Ryseum. The myth and the historical version of events blur. Scholars argue Surah gained a reputation as a hero after saving children from a bear attack, and for his athletic prowess. He was elected town chief at an unusually young age, and spurred on by the threat of the Urcifer tribes raids of the local farms, united the surrounding towns in an effort to rebuild Ryseum and utilise its remaining defences.   The myth claims that Surah was the son of the fire god Tastrof to a beautiful human maiden. When he was 18 he saved the village children from an evil demon, and the gods were so taken by his courage that they granted to him the ruins of Ryseum, to be rebuilt into a holy city that would stand strong for many ages.   Whichever the truth, Surah led a revitalisation of the ruined city. They successfully repelled the Urcifer forces when they attempted to attack Ryseum, and Surah was proclaimed King of Ryseum. Agriculture around Ryseum prospered, likely due to the cessation of destruction by the raiders. Ryseum grew back into a prosperous city and immigrants descended upon it from across the local area.   The myth claims Sura died at the age of 303, though most historians believe he died at a still venerable 90. The city he rebuilt prospered under his descendants, becoming a significant local power within the next two hundred years.   The Sura Calendar was established by his descendants, marking the years since Surah’s birth, as part of a movement to establishing a cult of personality around Surah. It proved successful, for under a revitalised call to honour Surah’s legacy the city built a new kingdom.

From their new capital, the formerly nomadic Caerul conquered and united the cities of Nimula, creating the first Ryseum Kingdom. Ryseum gained a significant population of slaves throughout this period, leaving the Caeruli outnumbered 10:1 and their ruling dynasties responded through rigorous militarisation of their culture.   Caeruli men were expected to dedicate their life to martial prowess - trained from youths to be elite soldiers. Caerul women had always enjoyed many rights. The ongoing frequency with which the Caeruli men were occupied in wars, meant that by the middle of the Caerul period, c.450 RC, Caerul society was a fully functioning matriarchy. 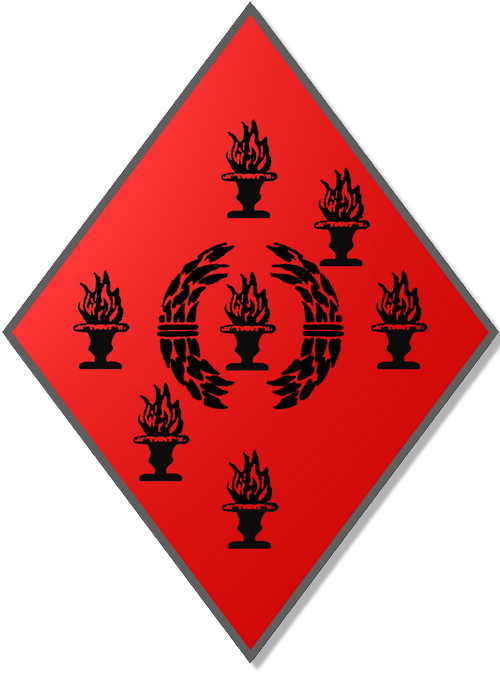 The Shield of Sura, created in 2901 YSB. Burning urns represent the One and Six Gods, with the one god central and surrounded by a wreath of wheat to represent the blessings he provides.
Type
Geopolitical, Empire
Demonym
Suran
Subsidiary Organizations
Controlled Territories
Notable Members