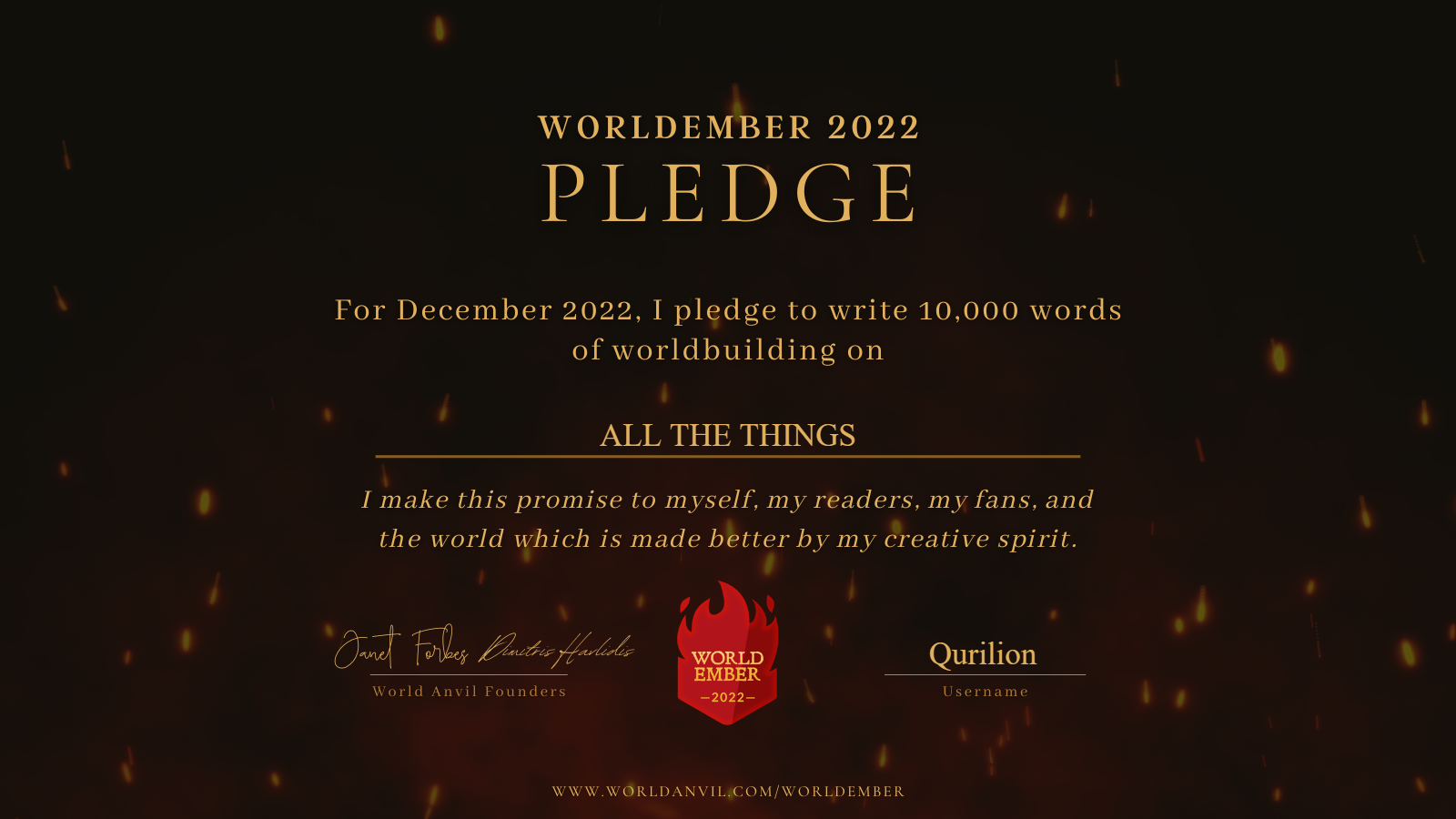 It's hard to believe it is already November, and WorldEmber is approaching swiftly. After what has been both a transformative and tormented year, I am really looking forward to getting back to some sort of writing groove - and what better way to do that than with WorldEmber?   And so, it is on! I'm excited to get back to writing for several of my worlds, maybe even a few pieces of prose and who knows what else?

What Am I Working On?

As is my habit, I will be working on several worlds at once. Much of the time, I don't really have so much of a goal in mind but just enjoy creating... And I find it hard to stick to just one world doing that.

Araea is a weird-fantasy setting in a world where humanity has been forced to survive deep underground since time immemorial. The surface of the planet is a barren wasteland plagued by radiation, vicious storms and terrible beasts.

This world! My most expansive creation and one I always love working on.   My Goals:
As you can tell, these goals are... pretty loose! For Araea, I don't really have a more focused goal than that but to go where the creative winds take me and just enjoy the process of writing.

The world stands at the dawn of the 21st century, entering an uncertain age. Monsters and magic, powers ancient beyond measure, lurk in the dark. In the shadows, another world lies next to our own, both a sanctuary and prison - a place beyond the reach of mortals.

Shedim is my contemporary, dark-magic/occult weirdness type of setting. It draws inspiration from the World of Darkness, SCP, occult lore, and cryptid shenanigans.   My Goals:

It was supposed to be the End of All Things, except something went terribly wrong. Gods and devils had assembled, ancient evils had stirred and the star aligned, and then nothing went the way it was supposed to - mostly likely through the meddling of adventurers. Something terrible happened and there would be no victories, as the cosmos tore itself apart and collapsed back in on itself.

Ithekshem is a post-apocalyptic fantasy world, of magical mass battle, of chaos and all manner of weird things. It's a setting I explore as a diversion, since it's sort of... If not whimsical, at least not as much pressure attached to it. :)

My Goals
Ithekshem is probably the setting I have the most focused idea on. And I'm looking forward to it! It's been pretty loose so far, mostly touching on setting-wide concept, disconnected regions, and random magic random.

I'd also like to get back into the habit of sharing my work with people. With all that happened in 2022, I kinda withdrew into a shell for a bit, and it'd be fun to get back out there. I would like to read and get back to leaving those chonky page-long feedback comments (for people who desire them) and generally getting back on this wild writing journey with people. Getting better, together!   And maaaaaaaaybe I'll do something for the Imaginaerium, too...

For now, that'll be it. I'll see you in December!

Excited for more excellent Q writing :D Wishing you all the best for WorldEmber <3

These goals are great! I wish you so much fun writing and creating. I know I'll enjoy your new articles and stories <3

Really looking forward to digging even further into all three of these worlds for WorldEmber, especially Ithekshem--I don't know much about that one yet and definitely want to know MOAR! :D

Thank you! I look forward to more CYOA and cyberpunk madness from you, too <3

I am *thrilled* to hear there'll be more Shedim. I'm very excited to see what you'll write this worldember Q, best of luck!

Likewise! I am looking forward to more Solaris! :D