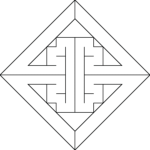 Every village and township from Y-Elel in the North to Y-Ki-Nysz in the South was abuzz. Market stall-holders at Trader’s Square could not keep up with the queues of customers and the rich scents of fresh elk, mutton and even hill-bull were wafting through the air. It was time for the annual Grànormii, or Great Lights, feast. In the three weeks of build-up to this national unity celebration, the wealthy had donned work clothes and cleaned up the streets of Bezélan Minor. Even Ragged Row in the Capital had been furnished with new stone pathways and fresh pitch applied to all the houses to help keep out the cold.   King Carnael stepped out on the balcony of Saf-Athan Palace and took a deep breath of the cooling late afternoon air over the capital of his fair realm.   “It is lovely to see your people acting with one mind, purpose and spirit, is it not, your Majesty?” asked a beaming old lady propping herself up on her staff next to the King.   Carnael nodded.   “Would that it could be the case during the other ten months of the year, dear Claris. But we will celebrate the moment. Is the Circle ready?”   Claris chuckled hoarsely, which made the King laugh along.   “We would not be much use if we couldn’t be prepared for an event that happens, predictably, every Ana, would we?” the old mage asked.   “No, I suppose not. Are the Elelupii delegates planning to attend, do you know?” the King asked.   “We believe so, though most are awaiting us for tomorrow’s Blànumbé, sorry, 'Snow Walk' through the Forest of Doon. They also have their own banquet organised North of the Forest.” Claris reported.   “Sounds good to me,” Carnael affirmed, “well, I believe I have one Ur until the celebrations begin, so it is time to assemble my troops. I will see you later, Claris!”   The wrinkled, smiling lady bowed her head and made her way down the spiral staircase to the ground floor to return to The Mingling, the public square at the West Gate of Bezélan.

“Hurry up, Klor'asq!” Farynna laughed, “We’re supposed to be tidying not un-tidying!”   The two Kyadii had been tripping up and spilling things all afternoon, rushing to get the Tower as clean as possible before they could head to the party. Unfortunately, their hurrying had proved somewhat counterproductive to the aim of cleanliness.   “I’m coming, I’m coming!” Klor’asq growled in mock-irritation, “And hey, I’m always careful when I’m carrying food.”   The fish pielets smelled divine and the two servants knew that, for once, they would get to eat some of the food they had prepared.   “Too true,” Farynna smiled, “Alright, so the pielets are for The Mingling and, let me see, the frosted apples are for, hmm,” she pondered at the now coffee-and-food-stained list Frehghan had left for her.   “Risehope?” Klor’asq suggested.   “Yes! Thank you, the ink has got a little...stained, today. Remember to put the pies in the special case my Master worked on this morning.”   “Neat invention that, some of his fire in the steel wagon, to keep them warm. Right, I’d best run, or else they’ll be late!”   “I’ll see you there later to help serve,” Farynna said and dashed to her room to change out of her kitchen robe. 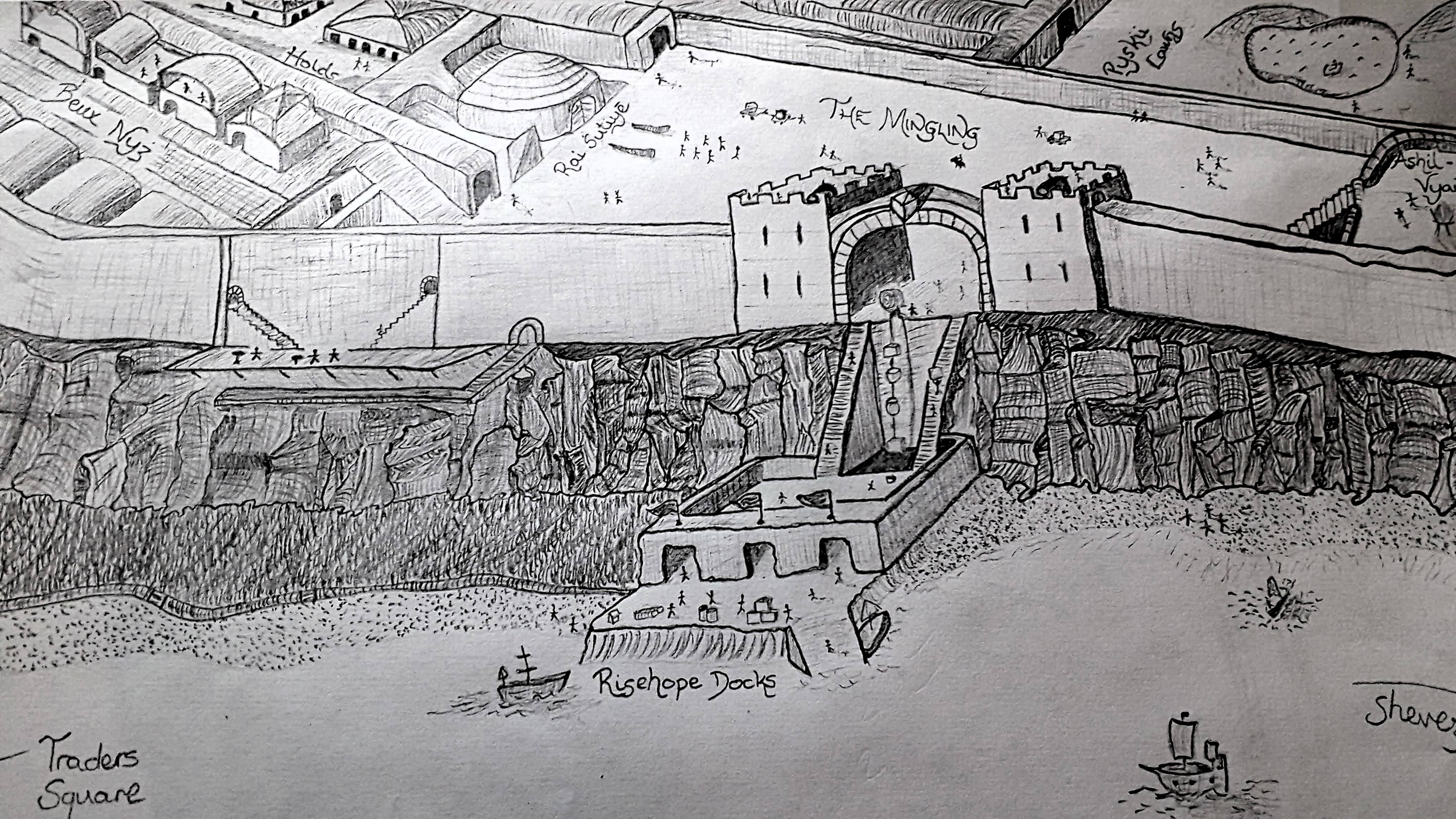 by F. J. Brodie
“Ah, the Capital,” the top-hatted Elelup sighed, staring up at the Gate of the Hundred Steps, “one day they might make steps small enough for us.”   “Steady on, Pakan,” his compatriot urged, “change doesn’t happen overnight!”   “And a shame that is too,” Pakan grumbled, “I would be grateful for that ugly barrel-lift thing if they cleaned it out first. Maybe we can be contracted to build them a new contraption.”   “For one night can’t you just stop thinking about business?”   Pakan looked aghast at his fellow, hands on his hips.   “But what then would I fill my mind with, my dear Manil?”   “I suggest ale, hot food and sweet bread!” Manil replied, smirking.

“Farynna!” Frehghan called from the alchemy library.   “I’m here Master,” the Kyadd replied, hurrying to him, “Though I need to run, literally, to The Mingling right now.”   “Calm yourself, Farynna, I have no request to make of you. I just wanted to give you this.”   The older man reached under his polished, wooden study table and pulled out a silver-edged book, bound in fresh leather. Smiling, he passed it over to the dark ochre-furred Kyadd.   “Herjé Grànormii, imgrasz!”(1)   Farynna’s jaw dropped and took the book from her Master, her paws trembling. The cover was marked in ancient rune symbols. She even recognised some of them, to her own surprise. The real shock, however, was her Master actually thanking her; imgrasz was not a word she was accustomed to hearing, though she always knew he was grateful for her assistance.   “Imsy(2), and with you, Master, but why?”   “I thought you needed somewhere to write down what you learn here?” he smirked.   “I do, but...you know about my...learning?”, the Kyadd asked nervously.   “Of course, and that’s no problem. Now, go with my blessing and get to the feast!”   Farynna, still shaking, bowed to Frehghan, tucked the precious empty tome inside her tunic and ran to meet Klor’asq.

The cool night sky was filled with myriad constellations and the Lùn smiled from above onto the gathering crowd. Many folk were enjoying the pre-speech food, for which no coin had been expected. Others discussed the meaning of the tall, circular platform that had been erected in the middle of the square. Laughing children played with huge reed hoops, or challenged each other with stone cube games akin to the adult random-chance gambling challenge played in many an inn across the Realm. Some of the more adventurous little ones rolled in some recently-emptied barrels, daring each other to try to reach the sea. A small number of casually-dressed soldiers had been posted in strategic locations to ensure none of them succeeded in floating into the ocean.   A sudden fanfare of trumpets startled nearly all present in The Mingling, reducing all conversations to a murmur. Nodding from a wall above the crowd, the King ordered the central torch be lit. Frehghan raised his budding brand and uttered a few words. To the awe of the crowd, a flame shot into the sky and descended onto the torch, igniting a brilliant fire that illuminated all corners of The Mingling and even shone over the wall into the adjacent garden and small lake.   “My citizens, fellows, friends and visitors,” King Carnael loudly announced, flanked by two heavily-armoured Royal Guards, “I wish to thank you all for coming to enjoy yet another Grànormii, or our Great Lights Festival. Please avail yourself of the food and drink - take some home to your families if time and distance are short.”   Farynna silently padded up next to Klor’asq’s stall.   “Sorry I’m late,” she whispered. “Don’t worry about it,” Klor’asq softly replied, “the King’s only just opening the festival. The main rush will be in a few minutes.”   Farynna nodded and turned her gaze to Carnael’s position.   “Tomorrow the celebrations will continue into the Forest of Doon,” the King continued, “where our partners and allies the Elelupii will be serving up their local delicacies.”   Standing on a cart at the edge of the crowd, Pakan laughed into his hands.   “Well, our employees and contractors will be serving up our delicacies anyway!”   Carnael surveyed the attentive faces and smiled.   “For tonight, be free to enjoy what the Realm of Qal'ath has to offer, but before we open up the stalls,” he said, pausing for breath.   At that signal, the six Mystyrii(3), who had silently ascended the circular platform raised their staves and brands and from each of them, bright colours soared into the sky. From one, striking reds and oranges appeared like flames, from another brilliant blues like ocean waves. The third’s white wisps weaved through and around the red and blue lights. In motion, two of them painted pictures of mountains in the sky. As the vast artwork formed by the sorcery took shape, Claris smiled and from her staff a near-blinding white light burst forth in the appearance of a fountain, watering the invoked world and bathing it with life. Some in the crowd pointed skyward in awe, while others thought they saw flames like birds flitting through the mountains in the air. Not a few children jumped around, trying to catch the fountain’s drops in their hands. After the living picture was completed, the mages of the Crystal Circle turned to face the crowd and the image was slowly drawn back into their staves and brands. A murmur of disappointment rippled through The Mingling, but was cut short as all the colours separated and reformed into an arc of many colours over their heads. The white-and-grey stonework of Bezélan was bathed in oranges and greens, blues and reds, whites and yellows, broken up only by the occasional star twinkling through the archway, which was seen from the other side of the ocean West to the northernmost watch tower of Doon.   There, two young Woodsmen, Lyssah and Calledth embraced.   “Herjé Grànormii,” they whispered to each other.   From their stall, in the final moments, before they would be swamped by hungry, grasping hands, Farynna and Klor’asq bumped their fish pielets together.   “Happy Great Lights,” they said laughing, “bottoms up!”   They flung their pielets in the air and caught them deftly with their teeth before enjoying the taste of a night of freedom.   “The King has finished speaking, the fire is lit and I have fish in my stomach.” Klor’asq said, licking his chops with satisfaction, “it’s a refreshing change.”   "That the King has finished speaking, or the pie?" Farynna grinned, which was reciprocated.   The crowd cheered, signalling an end to the formalities and, most importantly, the start of the main feast. Where the mages had once stood, a small group of musicians had gathered and began playing many of the enchanting and uplifting dances inspired by the various people-groups and cultures of the Realm.   “Let’s just hope there’s food left at the end,” Klor’asq added.   “Ha! I think hope is all you’ll have, I’m afraid.” Farynna laughed, “Let the craziness begin!”

Happier Times is a celebration in the Realm that takes place a number of years prior to the plotline I’m writing for my first fantasy novel. There are no hints here about that book, so you can have another spoiler-free enjoyment into a more positive time for Qal'ath and its neighbours.