Klor'asq is from the Kyadii of the Deenfeiss Leen tribe that hails from Frostplain far to the North of the Forest of Doon.

Unlike Farynna, Klor'asq did not take - or desire - a Foyiitùn name. Therefore his is based purely on Rarshk, the Kyadii language. Therefore his name meaning "Silent Fang".

On the whole, Klor'asq is healthier than anyone else from the Deenfeiss Leen clan. This was simply due to no longer living in the unforgiving icy North. He is still a very thin Kyadd, despite eating much more than any of his former clan. While not as physically strong as Farynna, he was exceptionally agile.

Until the separation from his clan, Klor'asq had pale blue eyes, but as Ice shards from the onslaught of Elements Water and Wind lodged near his eyes, they took on a glassy or glossy tint. With these "Ice Blue" eyes and dark-blue facial and leg stripes, there was no other Kyadd in Bezélan or Bezélan Minor like him.

Near-invisible stealth and also an ability to camouflage (as the fur's properties took on a little of the colours around) against colours that were slightly lighter or darker than his fur.

Klor'asq, as one would expect of a servant, did not have many changes of clothing. Those he did have he allowed to fall into disrepair. All, except his cloak which had a hood, enabling him to slip through crowds and, often, concealing his race to all except those that looked at his feet. He also wore baggy "slop" style trousers, into which he would tuck his tail, for the same reason.

Although the image here shows a sword, until 553AFD that was not the case. The one personal possession he did not lose in his separation from the Deenfeiss Leen was his dagger. Carved of one solid piece of rock and enchanted by the clan's only Mage, it was the tribe's unique weapon: a blade that, once inside its victim would freeze them from the inside.   While this sounds ominous, its invention was initially purely practical. Hunting was so difficult in Frostplain that when they did find more than ample creatures they were able to eat, they had to "over hunt". However, the enchantment was the perfect preservative, allowing food to be stored in guarded caves, rather than in the freezing outdoors where scavenging creatures might steal it. Skip To:

While he was born and raised in the wild lands of Frostplain, Klor'asq became separated from his clan during an ill-fated hunting trip, where the snow and icy winds descended in such a vicious way, that even the most hardy of the Deenfeiss Leen became cold and miserable. Klor'asq, suffering from icy shards in his face became disoriented and, when he finally came to his senses, had no idea where he had been swept to.   After months wandering the hills, eating whatever creatures he could hunt, he eventually sighted Bezélan and made his way to the Capital, in the hope of finding shelter and eventually a return to the Deenfeiss Leen.   With no work to be had, the Kyadd struggled for some time in Bezélan, until Jakarrn from the the Crystal Circle found and took pity on him. He agreed to be her servant in exchange for lodgings, food and whatever education they could assist him with.   Realising, eventually, that his clan did not care for his loss and, enjoying the warmth and food available, he abandoned the idea of returning to Frostplain. Thus, he played no part in the Qal'ath-Foyii schism over the [Viàn Falìnai] during 545AFD.

Joining Jakarrn as a fully-adult Kyadd, no particular offer of structured education was afforded as it was for Farynna. However, his role as servant to the Crystal Circle meant his master was able to teach him to read and write. Such things were not required in the survivalist culture of the Deenfeiss Leen. Safely in the tower, however, he pursued knowledge of powers, people groups and properties of materials.   He also took to learning Magecraft on the side, though not with permission of anyone in the Circle.

As mentioned, Klor'asq was a Servant to Jakarrn. Unlike Farynna, he had eventually negotiated a very small payment on top of the lodgings and food he received. True to his name of "Silent Fang", his ability to remain hidden had afforded him numerous opportunities to gather information, gossip and the occasional piece of military intelligence, which the Circle was able to use for protecting the Realm of Qal'ath. It was for this "extra" work he negotiated the supplemental coin. Skip To:

As with all Kyadii, no matter how dirty they were when hunting, he still ensured a proper wash after a day's work was done. Where possible, he tried to use heated water, which showed how far removed from a "traditional" Kyadd he had come since his separation from the clan. Skip To:

While at times his voice could take on the gravelly tones of the Parrtrof Teeg, when engaging with another speaking Common Tongue he usually spoke in smooth, low-purr tones. He was gifted in pursuasion and would have made an able diplomat had life taken different routes to the one he was on. 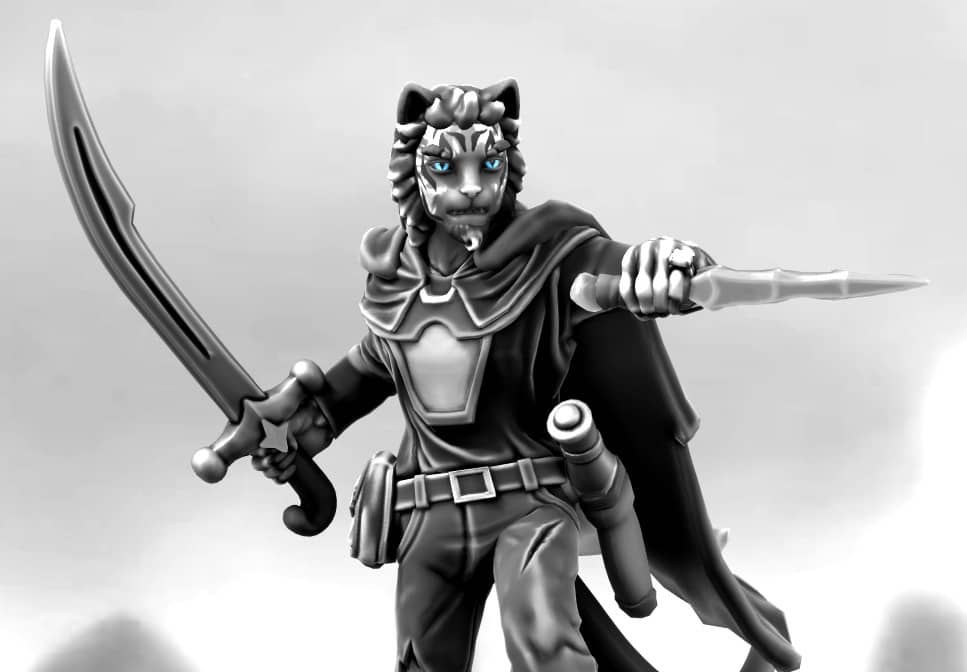