Things haven't quite worked out for poor Kelithir, who has been living a bizarre and upsetting phase in his life during the past 25 years. While the last 5 years have finally given him his dream fulfilled by letting him work as a mercenary, odds have been very much against this well-meaning entrepreneur.

Kelithir Ceanell is Spellblade mercenary, who has recently arrived back to the Silver Shore Island he grew up in. The shadow of the War of Scale and Arrow has left the locals suspicious of High Elven kind, and Kelithir has desperately tried to find his place in his now very changed home.

In the game, Kelithir was hired by the player party Elflings to get them to Whispering Willow and back from Moon Terrace. He has since become a friend for Patch, where Shade finds him more of a rival or threat, making non-comfrontational Kelithir very uncomfortable.

Also Kerymis Donaevel, who used to be Kelithir's next door neighbor in his childhood has arrived at the island, and keeps pestering Kelithir from his ominous visions and his safety in his chosen profession.

Among High Elf males, Kelithir could be described as rather tall individual. He is muscular but not obviously buff, broad-shouldered and had significant physical strength and stamina. While not exactly clumsy, he is also uncharacteristically stiff in his movements when compared to an average elf.

Kelithir has broad shoulders, and he is a tall (184 cm/~6 ft+) and decent looker as far as high elven standards are concerned. He has straight blond hair that hits his shoulders, sky blue eyes, narrow and pointy nose, and his elven ears are rather long and curve upwards.

In game terms, Kelithir is a diviner wizard cross classed to a champion fighter to form a Spellblade. His spell list includes several Divination and Abjuration spells with utility uses with few transmutation ones for good measure, with some close combat evocation spells of thunder and lightning variety mixed in. His most recognizable spells include: Booming blade, Thunderclap, Thunderwawe, Alarm, Identify, Shield, Mind Spike and Absorb Elements. Mind spike is known to be Kelithir's only long-range attack.

Additionally, Kelithir can get hunches from future or things happening close by, sense ill-things with some accuracy, have prophetic dreams and have occasionally been used as a transmitter by other entities that have communicated through him. Abilities have some inaccuracies, and Kelithir is very uncomfortable by both having them as well as sharing them.

The most distinct fashion piece Kelithir carries with him is his long, bright red jacket, which acts as the cape of mountebank (as described in Dungeon Master's Guide). The jacket is originally human-made in Freynia, and as such has cut and color uncharacteristic to Islenorian fashion. He wears several rings in his ears, round glasses, and a mithril breastplate hidden under the jacket. He tends to keep his hair on stubby ponytail.

Kelithir also carries two simple, but well-made longswords, spellbooks, and a wizarding focus amulet shaped like a silver sword with a yellow gemstone embed to it.

Physical strength is Kelithir's strong suit, and he is not only proficient with using blades, but he is also more than capable of fighting with two longswords and do so effectively.

Kelithir was born in Numen Hoop in 7th of Oct, 3926. He is the only child of Lafaetus Ceanell and Galalia Ceanell. Lafaetus was transferred to work in Silver Shore Island few years before.

As a talented diviner and a public officer from the Empire of Islenor Lafaetus took his job as well as his nationality very seriously. Lafaetus did his best to make sure that young Kelithir would live up to family values and grow up to be exemplary Islenorian. Galalia, on other hand, is a talented and rather well known writer in the Empire, specializing on historical fiction. She would do her best to instill to her child the curiosity and appreciation towards history and teach him to have excellent manners.

None of these expectations ended up quite full-filled, though.

Kelithir's aptitude with Divinations was discovered in very young age but were it brought pride to Lafaetus, for Kelithir his "gift" was nothing but misery. Kelithir never felt comfortable with wizarding studies, nor with the visions and feelings, he was having. He also felt a great divide between the worldview his parents were offering to him and the world he saw around him. Despite of his parents' best efforts, Kelithir never identified himself as Islenorian, but learned appreciate the culture of the Islanders of Silver Shore instead. Even seeing his non-elven friends wither and die would really make any difference. He would take interest in the history of the island before the arrival of the Empire and secretly dream for something much more exciting than the paperwork jobs his father wanted him to get involved.

Kelithir would take sword fighting as his hobby through friends, behind his father's back. He wasn't originally expecting his practicing to become anything serious until he would meet Iolas The Wanderer. Around the year 3969, when Kelithir was 44 years old, he caught the eye of Iolas, a high elven mercenary who had lived on the island for a small while. Iolas was mostly shunned by the rest of the local high elves as he was suspected to be a deserter from the Islenorian Armyforce, but Kelithir found him interesting. After seeing Kelithir practice, Iolas would advise Kelithir in his swordfight, and soon enough, he would agree to take Kelithir as his student when he had downtime in the city.

Kelithir would form a bond to the older Spellblade, considering him like an older brother or an uncle. Iolas would time to time take upon jobs to help locals with bandits and monsters and teach his views on life to Kelithir, who saw Iolas' lifestyle as inspiring and thought him as his hero.

As restlessness at Silver Shore Island grew and first whispers of War started to circulate, Iolas would suddenly tell that he was leaving the island to a monastery in White Peaks. Shocked by this, Kelithir was sad to see his friend go, but as the last gift, Iolas gave him his mithril breastplate. Lafaetus would soon receive the summons to get back to the mainland, and heartbroken, Kelithir would have to leave his home island behind.

Despite of encouragement of his parents, Kelithir never felt at ease in the Empire he would start to take "trips" behind his parent's noses and volunteer to escort caravans, one such gig earning him his iconic red jacket. As the war came to a close and the Overlord Hiskar Ardiroth finally lift the ban fo High Elves entering the Aradace Tharur's areas, Kelithir would back his bags, say goodbye to his parents and move back to the Silver Shore Island.

With Island changed as much as it has, Kelithir has struggled to adapt to his surroundings but has started to finally gain his footing again. Hoping for the day he will be approved as part of the community again, he has been worried about nightmares that occur to him every time he arrives at the Moon Terrace...

Kelithir has never really come to terms with his natural sensitivity towards divination. Having his trance invaded by omens and sensing things around him as hunches have never been something he was comfortable with. Ever since he was a child, Kelithir has experienced nightmares, unexplained feelings of uneasiness, and other things others are immune to, and these feelings had made him uncomfortable, frightful, and disoriented.

For empathetic Kelithir, it has also been rough to know that many of the feelings and dreams he has are about things he cannot do anything about, like feeling the approaching demise of a sick person. It is also typical for these feelings to be hard to explain and uncomfortably complex. To protect his psyche from the unwanted sights and feelings, Kelithir has started doing two distinct things.

For this reason, Kelithir can sometimes require extra encouragement to trust his visions or confront his fears, as well as fine-tuning his tactics with how he deals with them. Rushing to the rescue works well when someone is about to get hit by a dropping object or they are pointed with a sword, but more delicate matters need more delicate measures as well.

Empathy and care, combined with a keen sense of justice, have always been characteristic features of Kelithir. He has always found it hard to watch when good things happen to bad people, and good people get trampled down, which also made him question several narratives he was fed to at quite an early age.

When seeing an apparent injustice, Kelithir is quick to act and do his best to save the situation. However, even when his morals compel him to do so, he often feels it challenging to tackle more complicated issues. His survivor instincts make him often also ignore any slanders thrown in his direction. He is more likely to go and comfort someone who has been verbally mistreated after the dust has settled down and helped them to hide than jumping between them and abusers when there are no physical blows exchanged. This behavior can be perceived as cowardice by some. For Kelithir, however, that is his way to protect himself and others from further conflict.

Kelithir is also very protective of his friends, and is ready to do anything to help them; even go far beyond his personal comfort zone.

While it is currently hard for Kelithir to get a chance to prove himself to the residence of the Silver Shore Island thanks to his race, overall he is a rather social and agreeable person to be around. He likes people, and is ready to see all the sides of the argument. As loud and outragious his attire is, Kelithir as a person can feel even a bit sheepish.

Kelithir has also a habit to collect around him people he feels like might need someone to take care of them, which ends him many times in position similar to a babysitter. As much as he hates conflict, if he sees someone he deems as a person who needs a shot running to their doom, he will draw his swords and follow with defeated sigh and with no questions asked.

Being a military history nerd is something Kelithir does low key while doing other pursuits. He also enjoys playing cards and spending time with people he likes, and doesn't mind doing other things like helping out his friends on their farms and such to earn extra cash and just enjoy the experience. He also rides his loyal steed Astald the Direwolf, wom he likes to spend time with. 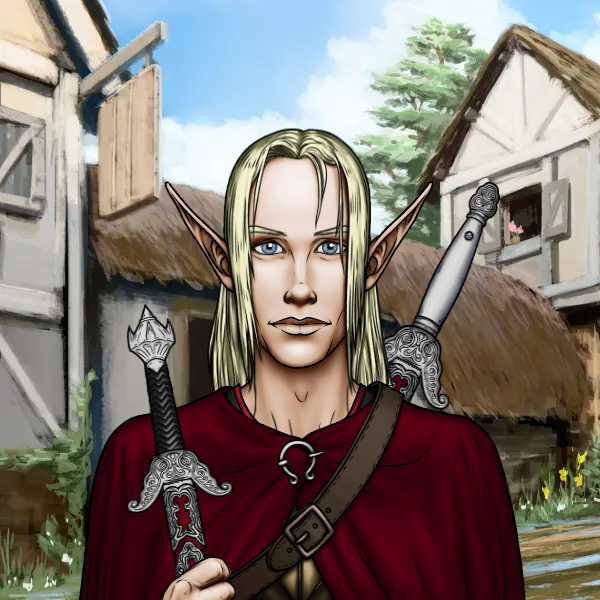