"What a place of magical freedom, of learning, breaking the limits of imagination. No where else can you be thrown out a tavern and have no idea what or how you landed in something, or whether you'll miss the ground entirely."
— Harlin Wyllt

Banshaw Edge is the second biggest city in Arrasgoth, found to the North East of the mainland on the coast, looking across at the Tudra Region. Banshaw Edge has one major road that leads into it from Dragonfell and some minor roads that lead elsewhere. It can also be accessed via the sea.   Banshaw Edge is the second oldest settlement in Arrasgoth, dating around 900 years old, after The War of the Skies  . The city was built as a haven for those with magical prowess, to explore and challenge their own limits in an environment dedicated to them. The city has the most magical items in Arrasgoth, creates the most magic items and is heavily protected by magic, including a magical barrier that cannot be passed once it is activated that covers the entire city both above and below ground.

Banshaw Edge has a large and varied population due to the nature of magic itself, with some changing their race due to wild magical mishaps. The city started predominantly with humans as their population but this has expanded over time to give them a little pocket of every race that can be found across Arrasgoth.   The major difference of this city compared to other settlements in Arrasgoth is that every single person that lives in Banshaw Edge can use magic in some way. There is not a single person living in the city that cannot use magic and if there is, they are quick to leave due to the heavy use of magic to get around the city, to live in the city and to grow in the city.

Banshaw Edge had a magocracy which they were happy to have, most recently having a human leader, Rudyard. He had been ruling for ten years and there was very little dissent amongst the people of Banshaw Edge over his fair and just rule.   After The Beacons of Hope returned from The Shadowfell, Rudyard started to find a way to bring back one of their lost companions. In doing so, he was corrupted by the dark magic of the Shadowfell and began to go mad. He declared war on the continent, trapped everyone inside and began to rule Banshaw Edge as a dictatorship.

Banshaw Edge's biggest defence is the magical barrier that can be put up to keep everyone in and anyone else out. This barrier had only been used once and that was recently when Rudyard declared war on the continent before keeping them all inside. It is an impenetrable barrier and cannot go through, unless the barrier is dropped. The leader must keep the magic concentrated for it to stay up.

Banshaw Edge trades in magical items and magical services to anyone that needs it. They can create magical items, enchantment magical weapons and cure magical ailments. However, since the civil war began, all trade has ceased and all industry has been aimed towards making large mechanical and magical constructs.

"A little on the louder side of life, plenty of things going on that's for sure."
— Alfyn Weis

The infrastructure of Banshaw Edge is focused heavily on the production and development of magical items and magical powers. They are the main place to go if you need something of magical means, or if you need some extreme magical help such as removing curses or healing destroyed limbs. The city is built to withstand magical feedback and to allow anyone to explore their powers.   There are three major schools of magic within the city that allow magic to be explored: Rudyard's University, Banshaw Edge Magic School and College of Wizardry. Each one covers a different aspect of magic, and there is a separate artificers guild, The Jade Guard Engineers.

Banshaw Edge's greatest asset is the people and the magical items it contains. It holds the biggest horde of magical items and is constantly creating more, especially with the help of the Jade Guard Engineers. If you need someone or something magical, Banshaw Edge probably has it.

The main guild within Banshaw Edge are the Jade Guard Engineers who are the best artificers in Arrasgoth. The city is also under the Kingdom of Cosmopolita as a faction within the civil war.

“Banshaw Edge? I’ve seen it as it was, a great place of learning. As it could be, a shining beacon standing alone against the Darkness. But I dread to see what it’s become now.”
— Emrys Ddraig Sy'n Ddu

Banshaw Edge started its life off as a haven for those with magical powers, a place for them to explore their gifts without fear of hurting anyone else, or destroying any buildings. This city continued to grow until it was a bustling hive of magic users, all learning and growing together.   When Rudyard declared war and the city was shut down with a magical barrier, people began to panic and try to flee. Some escaped before the barrier but most were left trapped inside. There were many riots before the whole city went quiet, working on things to help the war effort. Any sign of rebellion within the city was gone, unsure what had happened to stop it.   They sent out machines, large mechanical and magic constructs that walked out of the city and to the surrounding villages and towns in the Eskus Region. Many surrendered immediately, some were killed if they didn't. It is unclear how many more were being made in the city and what their purpose truly is. 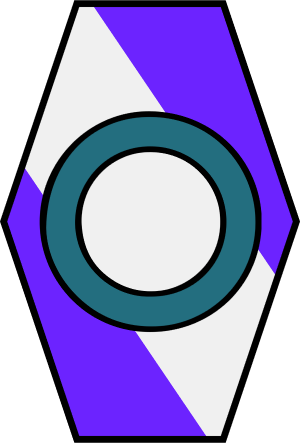 Arrasgoth is a custom roleplay setting based in the system of Fifth Edition, created by OncomingShower.   Arrasgoth draws inspiration from many different settings and lore within the Fifth Edition universe as well as other historical settings and events, under the Open Game Licence.   Dungeons & Dragons belongs to Wizards of the Coast and she claims no ownership of it.   All crests and portraits were created at World Spinner using either the Portrait Workshop or the Heraldry Editor.   All headers and cover art created at Canva using free images on their website.
Article template
Settlement
World
Arrasgoth
Category
Abandoned Settlements in Arrasgoth Locations
Author
oncomingshower
Publication Date
12 Dec, 2021
Creation Date
13 Dec, 2021
Last Update Date
13 Dec, 2021
Visibility
Public
Views
107
Favorites
Comments
0