BEST OF WORLD ANVIL 2020: NOMINATIONS ROUND

It's been a while since I've posted anything to this world! If you weren't aware, I've been busy (sort of!) over at my new world Cathedris. It's a world of broken, dead gods, who refuse to actually properly die. Maybe check it out if that interests you!   The reason I'm posting here now is that World Anvil is hosting a best of 2020 event! Right now we're in the "NOMINATIONS ROUUUUUUUND", and I would love if you might consider some of my work for nomination! If you haven't yet seen, you can go here to vote.   If you want to view PLENTY of good entries, go to the #for-your-consideration channel on the WA discord. Alternatively, click this invite link.   There's a few pieces of work I have that are among my favourites, and I'd be overjoyed if you considered them among the best. I'm already absolutely blown away by the support and love I've gotten with my new project Cathedris. It's given me plenty of inspiration to do the best work I possibly can! So thank you for reading my work, thank you for the support, and have a great day :) 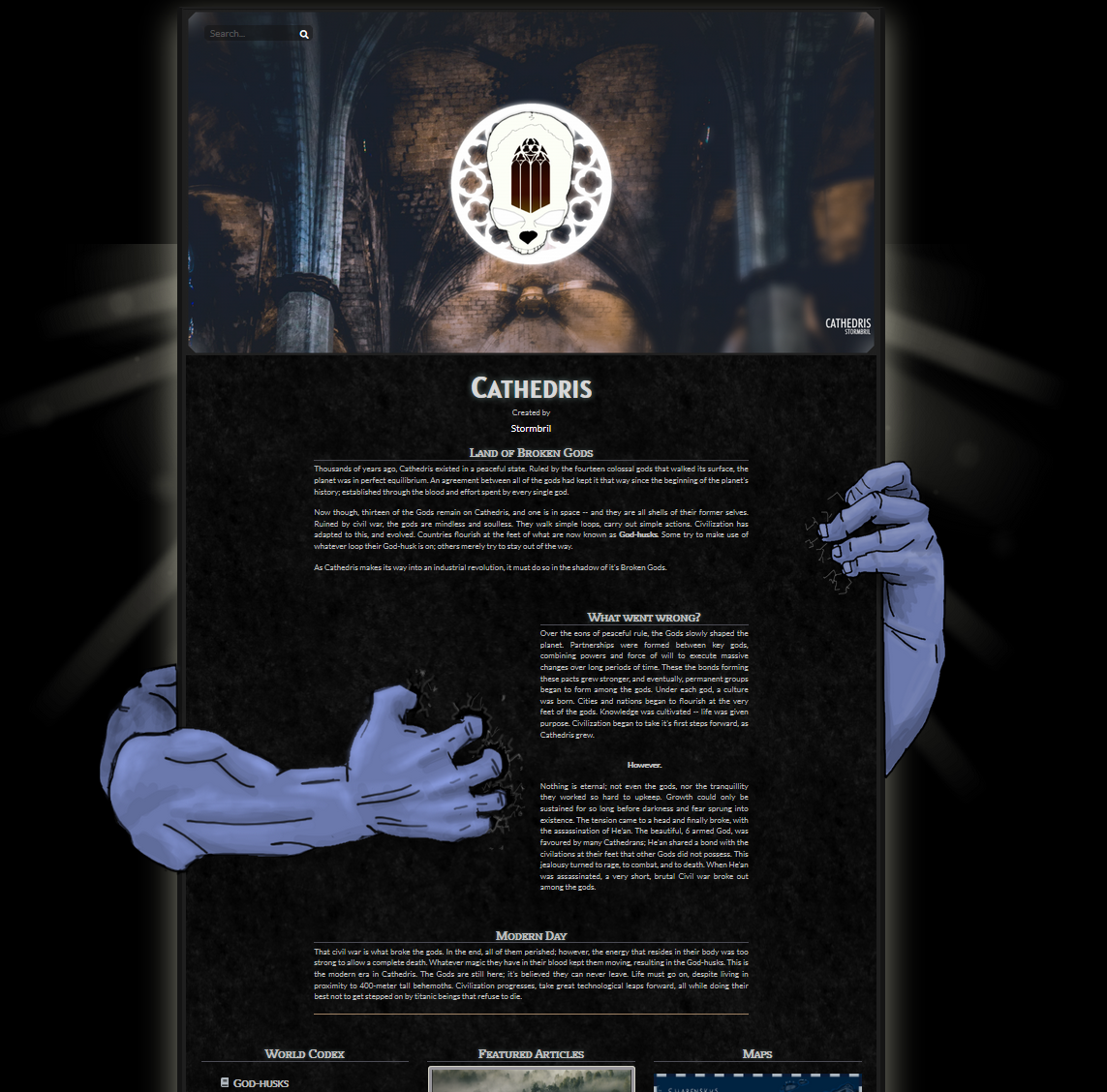 First example of the "floating arms" and wrap-around CSS that I like to use on Cathedris! I think it serves as a great introduction to the stylings and theme of Cathedris. 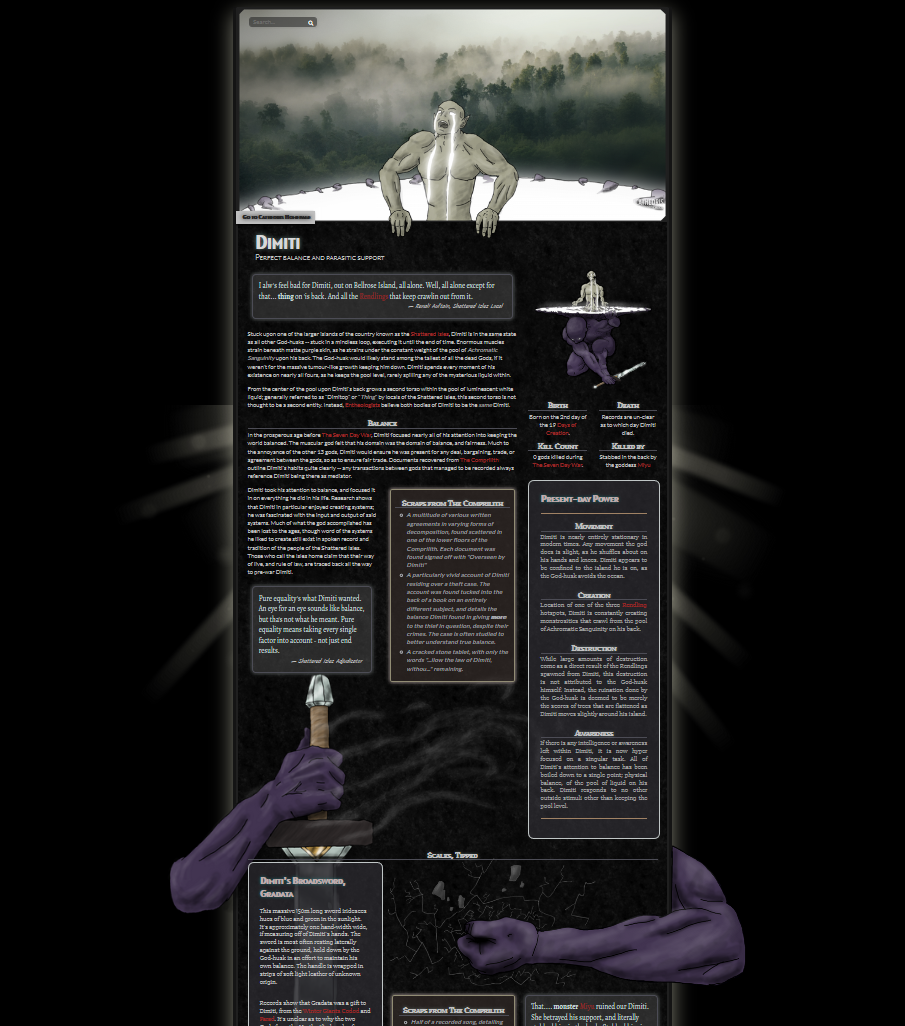 And my current favourite use of the floating arms CSS. Dimiti is my favourite god husk I've drawn and written about at this point. The article overall is dark, and hopefully sad feeling. 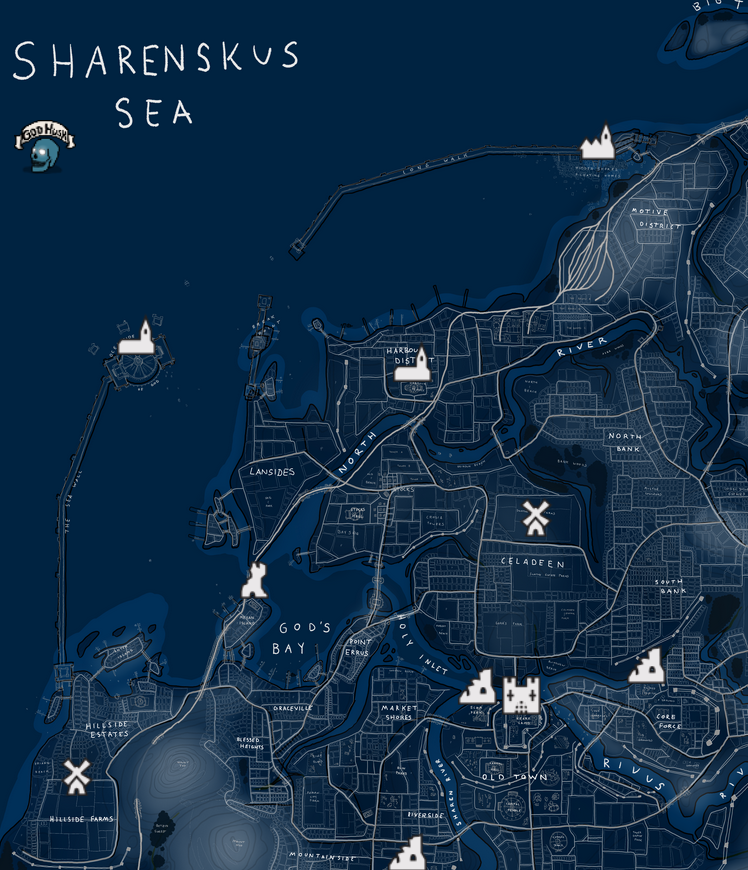 Blueprints to the Coastal City-State of Russin! I spent many many hours plotting, planning, and designing this intricate map. What was once 3 ancient towns is now one of the largest cities in all of Cathedris. 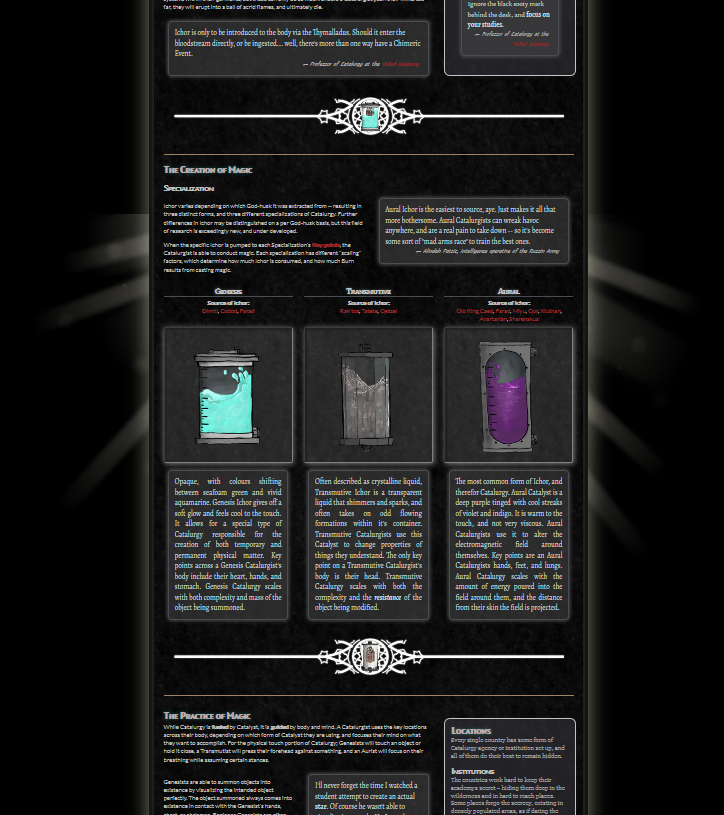 Using blood from the dead gods that wander the planet's surface, the people of Cathedris can work a dangerous magic known as Catalurgy. A risk/reward magic system, with plenty of risk.

I want to highlight some other entries as well. This idea is taken shamelessly from the wonderful Qurilion! You should definitely go and check out his own article, as it's got plenty of wonderful articles to consider within it.   Now, in no particular order...

If any of the above articles caught your eye, make sure to check out their entire world too! More than likely each creator has also listed out their own personal favourite entries for your consideration in the #for-your-consideration channel on discord. They'd be overjoyed if you voted for those specific entries!

Cathedris deserves votes! That map, those spoopy dead gods, ah it's such a delight to read :D Good luck <3

Best of luck to you as well! All of your work deserves votes, ALL OF IT! <3