Kauteirin the Fair (Nem: Kauteirin Walin) was an ancient Faren Hero. While both Kauteirin and his twin brother Daursan are technically half-giants, they are both counted among the Heros of the human race. He is remembered as one of the founders of Fares (Silford).

Not much is known of Kauteirin for sure, but the life of the twins is preserved in countless legends. At first these were preserved as oral stories, but they began to be written down soon after the invention of writing. One of the most popular sources are the epics composed by Ván of Sankai.

Main article: Daursan and Kauteirin
Kauteirin and his brother Daursan were conceived when the Hero Ásinnar lay with Knuckle the Giant. After giving birth she left the baby twins to be raised by an old widow called Sasinfa Grayhair.

When the twins had just grown up to men, soldiers came to take them to war. Daursan happily agreed, but Kauteirin fled to the mountains. He swore an oath to live in a temple and dedicate his life to serving Áfawarsal the weaver. However, some soldiers later came by the temple, and in order to avoid being recruted again, Kauteirin deguised himself as a woman. Unfortunately he became so beautiful, that Farinwél, one of the soldiers, fell in love with him. They courted in secret, but were caught and forced to marry each other.

Kauteirin was living in the army camp as Farinwél's wife, revealing his true gender to no-one except his husband. He regretted that he had not come of his free will and kept his honour, because now he wasn't even able to help in fighting. However, the love between the two men grew strong, and Kauteirin became Farinwel's trusted advisor in secret. 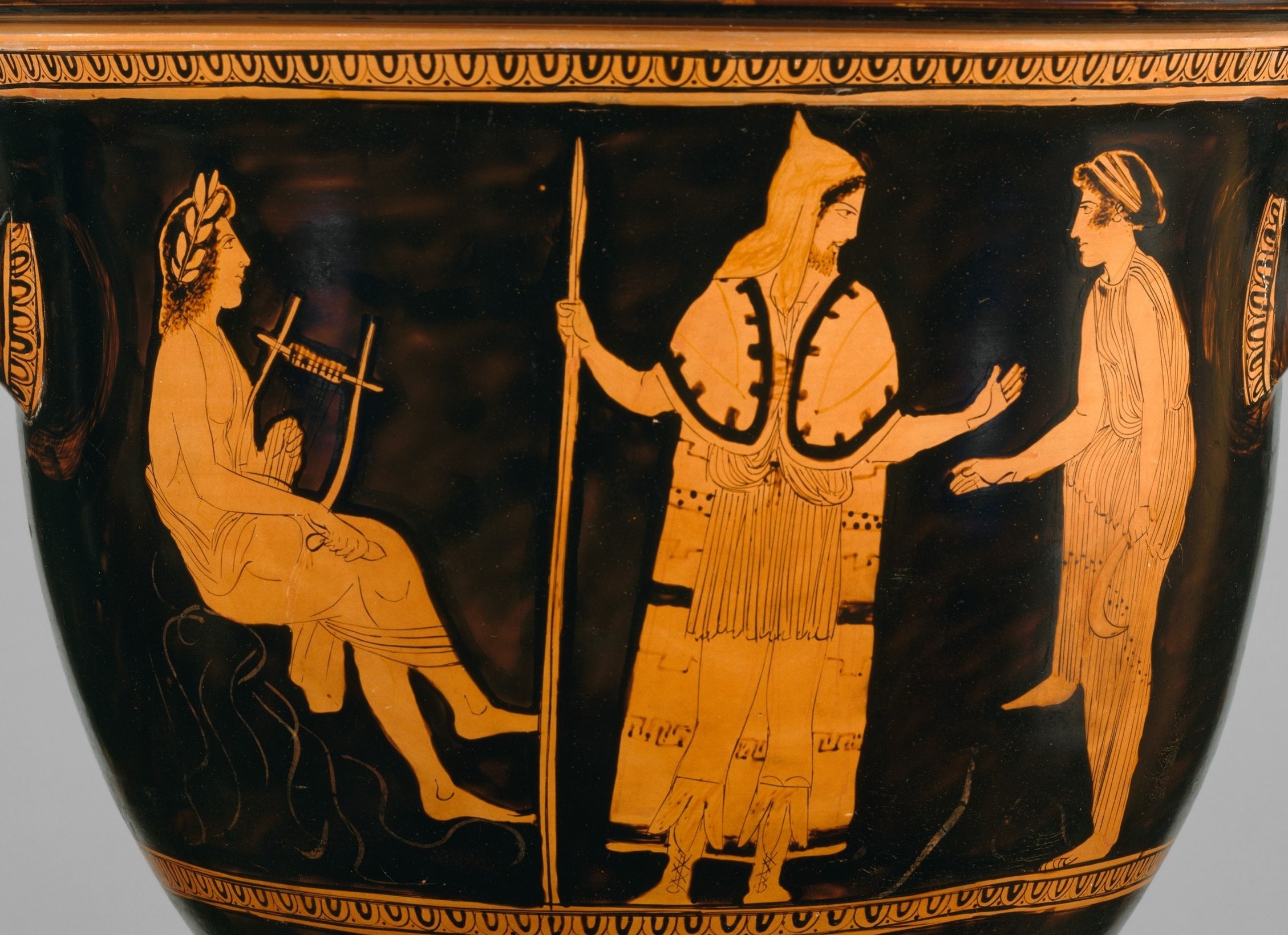 by Unknown artist, Met museum
Daursan and Kauteirin on a ceramic vase.
Kauteirin playes the lyre, while Daursan converses with a peasant woman.

Later Kauteirinwas again reunited with his brother, when Daursan was taken captive by the highland army - it turned out that the brothers had been fighting for the opposite sides. The brothers then helped to convince the commanders, that the fighting between the humans was pointless. The true enemy were the Giant rulers, who had been demanding the constant war. With the help of the Gods, they finally managed to drive away the giants.

After the war the people were free for the first time, but did not know where to go, now that their leaders the giants were gone. The brothers had to found a city to house them. But they could not decide which twin should be the ruler, Kauteirin the wise, or Daursan the strong hero of the war. This was already about to rip the people apart again, and the twins decided to ask an old man passing by to decide who should be the ruler. The old man thought for a while, and then said: "me". Because this was the will of the Gods, the old peasant became the first ruler, and this is why Fares (Silford) has always been ruled by it's people.

Kauteirin's other adventures are mentioned in many tales, but not much is known for sure. He is thought to have stayed married to his husband through the war even after being revealed to be a man, and perhaps to their death.

Kauteirin was known for his great beauty, and was often mistaken for a fair maiden. He regularly used this fact for his advantage, disguising as a woman. Not much is known for sure, but he is usually reconstucted having typical looks of a young Faren male.

However, Kauteirin was also a capable warrior, and joined in the war once his true gender was revealed.

His singing is enchanting: he can move any man to tears, and even the animals of the forest come to listen to him.

Kauteirin is remembered for being a great poet and singer, as well as a wise thinker. He knew the wisdom of the old times which he had inherited from his mother, but also developed Faren philosophy further by incorporating knowledge that he had learned living on the monasteries of the Serme Mountains.

Kauteirin is an eager student, always searching for new understanding. He is an emphatic person, who would rather hurt himself than others.

He is the son of the Hero Ásinnar and Knuckle the Giant, and the younger twin brother of Daursal the Tall. Ásinnar lay twice with the Giant, in order for her to negociate with a Yánkal the Snake who was corrupting Knuckle, and for both the times Ásinnar later gave birth to one twin. While Kauteirin was eloquent and cunning like their mother, Daursal inherited more from their giant father, being violent and warlike.

Kauteirin is married to Farinwél. Some myths tell of the children of Kauteirin, but it is unknown if he had any offspring. 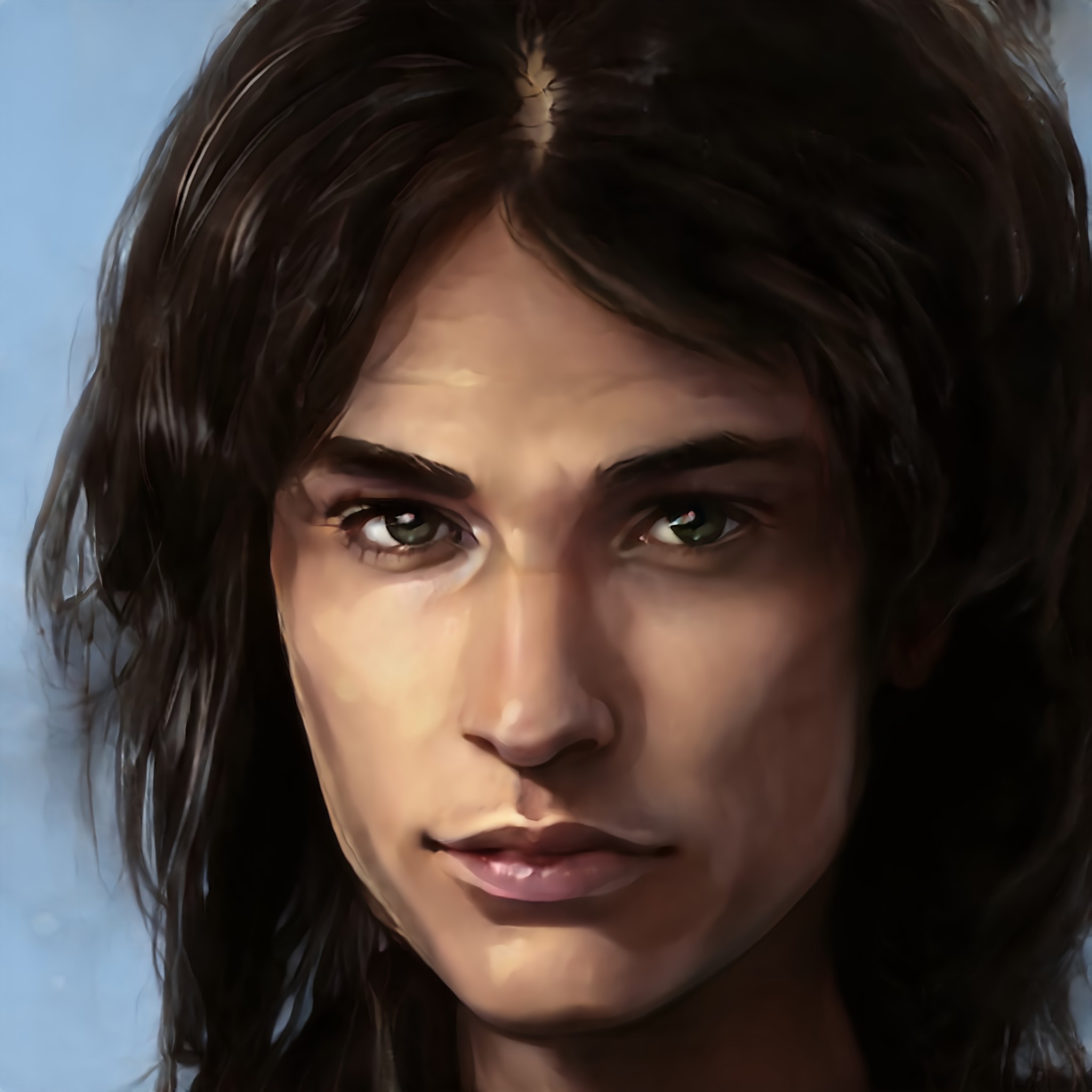