The halls of the ancestors

Vines and flowers grew between the cracks on the facade of the temple.
The light stone was old and worn, but in the sun it still glowed just as bright as it had done hundreds of years ago.

The Arcmore Sacred Halls is a religious and cultural building in Arcmore, Halivaara which is used for important events and religious meetings and traditions. The building was built around 350 AK, so roughly 50 years after the town was founded, and it is therefore around 400 years old.

Arcmore is mainly inhabited by Treil Iwachi and most citizens, Treil or not, believe in Prevajanism . The belief is a sort of hybrid between the earlier religion of the Treil as well as Arknaism.   Many believe that one can honour their ancestors without any temple or such. Simply leave an offering in the wild and whisper the name of the one they want to offer it to should be enough.
Town-dwelling people often opt for an easier way with a religious building with shrines in it. This is what the citizens of Arcmore did.   The Hall is mostly used for honouring the dead. Earlier leaders are immortalised as minor deities (in a way) and small shrines are made around the statue. It is said to bring good luck, honour and fortune to those who leave things at the shrines. The Treil believe that the minor deities can influence reality and that those who do not anger them will live good lives.

Other than being an important religious place, the Sacred Halls also serve another purpose. The Halls are the place where the next leader, also known as chieftain, is officially chosen.   It's important that the person is chosen in the halls so that all earlier leaders can bear witness to the new chieftain.
The Halls are usually also used to house people who have no place to stay, either due to being refugees or losing their homes in some way.   It's very common for Half-breeds to flee to Halivaara, if they come from The Kingdom of Edrea, then Arcmore is one of the easiest places to get to.

The Sacred Halls of Arcmore is 5 stories tall, only the bottom floor has walls. The rest only have pillars to hold up the next floors. The top floor has a roof made in the style of a typical Rama House, which means it's mostly made of flat stones, straw and clay.   The building is made from sandstone from Wodila'hei, most of it was brought to Halivaara from Mailessi. The bottom floor is made with the iconic framework which is often seen in the Treil architectural style, and the framework continues through the entire building, even the open floors. In the middle of the building is a garden with a fountain and the statue of the founder of Arcmore. 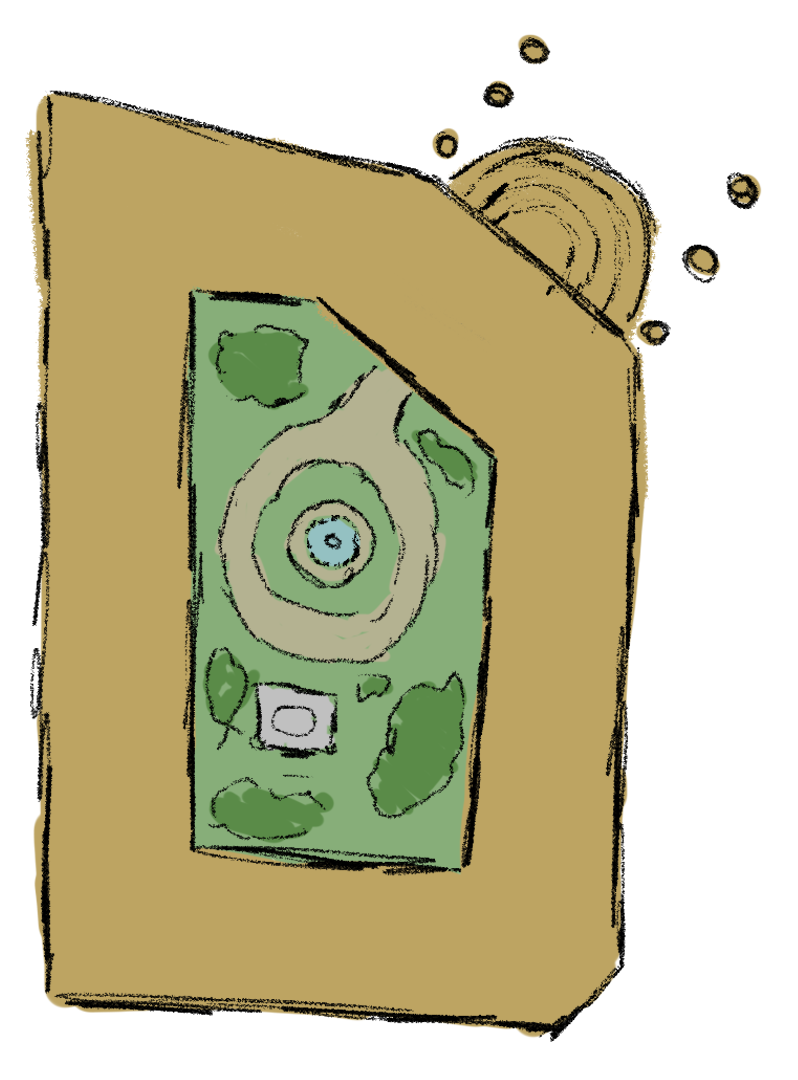 by Ninne124
The building also has a basement where food is stored throughout the year so that the citizens of Arcmore are sure they have enough for the tough winters.   The 1st story is the only floor with walls and there are no shrines or statues inside. This is the part of the building often used to house homeless people and refugees until they can find them a permanent place to stay.   The 4 other stories are dedicated to statues and shrines and there are around 40 statues in the entirety of the building. There is also an "all-purpose" shrine on the 5th floor which can be used to lay offerings to anyone you'd want to.
Arcmore

3rd comment! Considering how many articles you published, they are all really good. The formatting again is great, the article is easy and enjoyable to read, and your art is always nice. I love how you explained the ways that their ancestor worshipping traditions influence their lives under "Religious center of Arcmore" and "Other importance". Do the locals also venerate the founder of the settlement? They seem to have a statue in a nice garden with a fountain so clearly, people think they are worth remembering :D   The only minor problem I could find is tiny. The first paragraph under "Religious center of Arcmore" has a space between "Prevajanism" and the "." in front of the "The".   This will be my last comment for now. I'll get back to commenting when I wake up!