Introduction to the Cosmology

The Smoke of Shadow

The Smoke of Shadow is a thick, black fog that covered all of the existence before Yeor came into being, and still does today. Upon Yeor asking the Divine Question, pockets of void within the Smoke were filled with material and use to create the celestial bodies that compose Yeor's domain.

Yeor, the Awakened Creator awoke within a pocket-void of the Smoke of Shadow's and quickly became self-aware. Upon this moment, he pondered life and then came to him the First Question. In the asking of this question, Yeor begat matter upon the cosmos and filled the gaps within the Smoke of Shadow.

Urye the Leviathan witnessed Yeor's Divine Light from a far distance, which sparked his urge to create. This interest in creation leads to the forming Mir, and as a consequence, humanity. Urye soon fell into a deep slumber and vanished into the Smoke of Shadow.

The Planet of Mir is home to the continent of Insennis and Humanity. It is where the four l'Gota went to when sent on their quest by Yeor to seek out an unkown energy source, from outside of his creation.

Over time, as the l'Gota and their teachings had an effect on humanity, humanity themselves had an effect on them. Over the course of the second era the l'Gota and their Seraphim had come to be the physical and metaphorical emodiments of human nature itself. Their urge to fight, to survive, to make choices and suffer their consequences, to seek knowledge... All of this and more began to stem directly from the Engellic Spirits sent by Yeor.

The l'Gota of Life is one of the four L'gota of Yeor, sent out in search for Mir. Life is known for creating Zhic and Zhen. She and the Stenok fought in the War of Souls in the First Era. She took the form Hobbes in the Third Era in an attempt to experience mortality and better understand it.

The l'Gota of Knowledge created theSeraphim Chi'ta and Prezha . Very little is known other than Eyinan resides in the Right's Fold beyond the Wall with both Prezha and Chi'ta. He is most often worshiped by humans in one form or another, often being see as their protector during the War of Souls along with Vybor.

The l'Gota of Death is the original provoker of the War of Souls , and burdened humanity with the Seraphim of Bor and Akata . It was Stenok and Akata that provoked the Veera into taking the form of Yidul and manipulating the early founders of the Nation of Thul into establishing a theocracy in an attempt to guide human souls to death, and upset the balance established after the war. He resides in Ascendent, apart from the other l'Gota.

The l'Gota of Choice takes a passive role on Mir, residing on the Yeor's Handle, guarded by the Wall. He created the Seraphim Veera and Shayy to aid against death in the War of Souls . Veera is known for being the catylst behind the rising of the Nation of Thul.

The grandchildren of Yeor, they are creations of the four l'Gota, and thus part of the Engellic Spirits from the Divine Light. They were brought into being by their respective parents during the War of Souls in Mir's 1st Era and served as the right hands and closest executors of the Aspects.

Zhic is the son of Zhizn, sister to Zhen. She emodies humanities willingness to defend itself from attackers and invaders.

Akata is daughter of Stenok, sister to Bor. She embodies not only humanities, but all living creatures of Mir and their agressive tendencies. She is often found wandering the sites of recent battles and bloodshed.

Veera is the daughter of Vybor, sister to Shayy. She emodies the choices humans make specifically in regards to belief, faith and religion.

Chi'ta is the daugter of Eyinan, sister to Prezha. She is the emodiment of speech, emotion and communication among humanity.

Zhen is the daughter of Zhizn, sister to Zhen. She is the Seraphim embodying humanities pursuit to happiness.

Bor is the son of Stenok, brother to Akata. He emodies all of Mir's living creatures in the abilities to fear for their lives, suffer and live through trauma.

Shayy is son of Vybor, brother to Veera. He is the emodiment of autonomy and the right to ones self and own decisions. 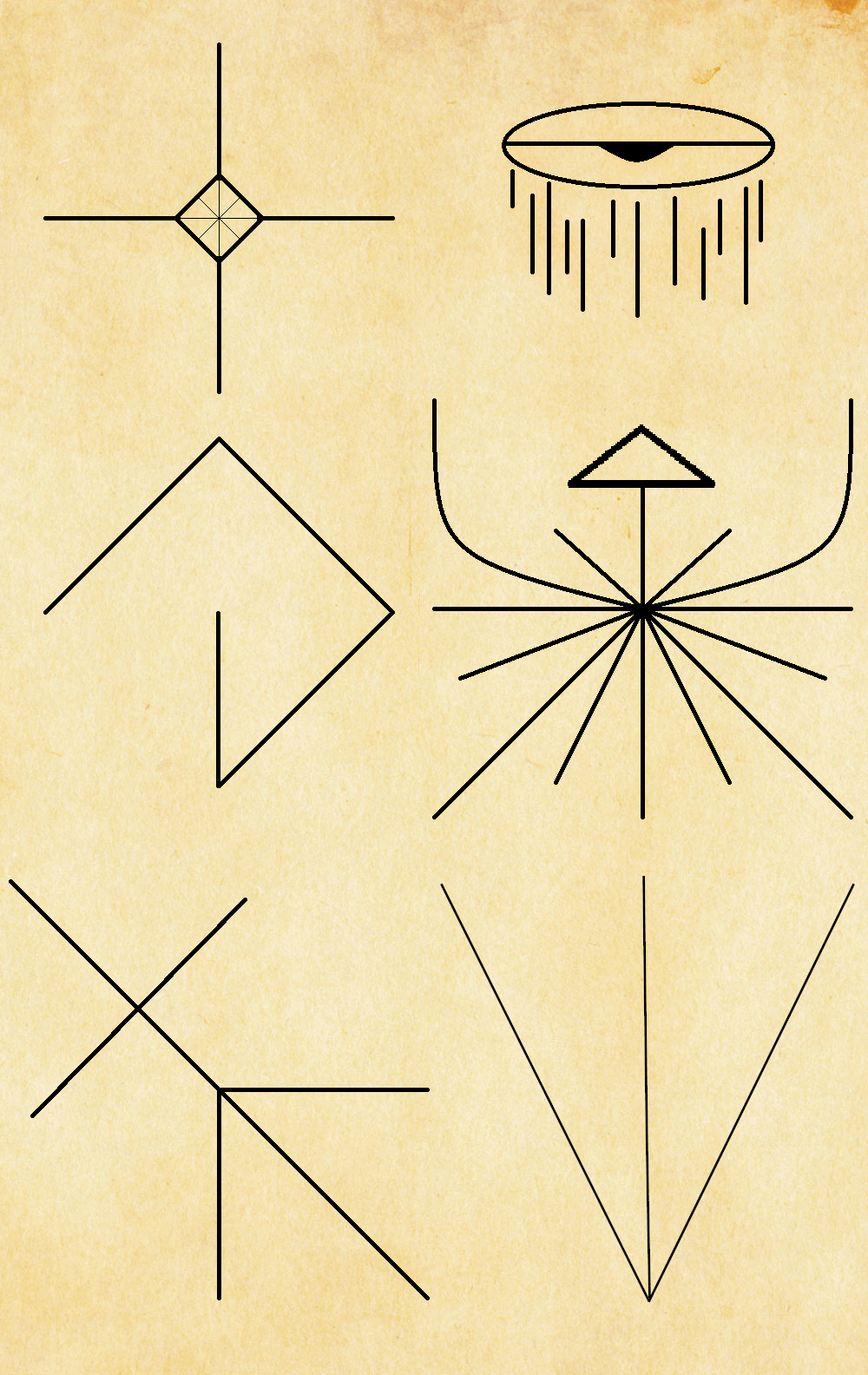 A drawing of the various emblems of the cosmology. Yeor being in the center of Zhizn, Stenok, Vybor and Eyinan.
Urye can be seen at the bottom, separate from the rest.

...and His Divine Light spread through the Smoke of Shadow, but was never able to reach as far as Mir, allowing Urye to form of natural processes, and it was he, the Leviathan and Deceiver who begot Mir upon the cosmos only for it to be torn apart in his slumber by Yeor's l'Gota, the Rights Four.
— excerpt from Sevan religious scripture describing the relationships between the the Engellic Spirits and Humanity.

Cult of the Deceiver