All biological & natural processes such as life

A single, large, open eye with lines at varying lengths and intervals reaching below, representing tendrils. Typically known as the Great Eye.

Succeeded in creating Mir in an attempt to understand and emulate the greater creation of the universe around him. Currently, sources claim that he is on the rise to reclaim his jewel in the Smoke of Shadows, the Planet of Mir.

Urye the Leviathan came into being soon after Yeor awakened and filled the pocketvoids of the Smoke of Shadow's. His coming was brought about by natural causes, the energies between interacting matter giving birth to his intelligence and ability to control that around him.

He soon could feel and sense Yeor's Divine Light, and in an atttempt to understand it, created a perversion of it. This realm became known as the Planet of Mir, home to humanity. It was soon after this even that Urye fell into a deep slumber, and seemingly vanished from the cosmos. 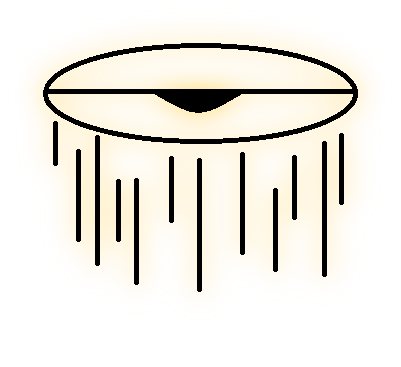 The Great Eye is used when referring to the Leviathan, with his many tendrils shown reaching below.
Divine Classification
Builder of Worlds
Species
Abominations
Realm
Smoke of Shadows
Church/Cult
Cult of the Deceiver
Children
Presented Sex
Male