Under the watchful of the Outer Planes, the High Priest walks their path alone. They must endure the temptations of demonic sin and the twisted words of infernal pacts, and must remain true to themselves even as chaos and law battle around them. They guide the lost without judgement, and wield divine power as if they were born to do so, sharing their clerical power with all those who seek it.   Whilst the High Priest typically possesses a deeply-held faith of their own, they are also the caretaker of the temple at which they stand, and thus must also be open-minded and involved with members of other clergies. This is doubly true for the High Priest of Celesthem Temple, for Celesthem is the largest centre of religious research and worship in the Aletheian Empire, and could potentially be one of the largest in Istralar as a whole.

Did you hear? They rejected another High Priest applicant today. Apparently he was pretty far into the process when they realised he was actually just a really good bard. Pity, I kind of liked him.
— Temple gossips

Any seeking to become the High Priest of Celesthem must have resided at the Temple for at least 5 years and must have attained a high level of clerical proficiency (usually at least 7th level spellcasting). They must take and pass an examination covering details of all religions within the Temple and various areas of religious/extraplanar knowledge (such as the necessary rites to expel a demon), as put together by the Temple's existing priests and their predecessor (if possible). The existing Temple Priests must also meet and discuss the merit of the potential new High Priest, and must all agree on their appointment. If there is any disagreement, it must be settled. A High Priest must be agreed upon by all within the Temple's priesthood.

After meeting all qualifications and having been agreed upon by the Temple's existing priests, a ceremony in which the High Priest is presented with the Key to the Temple Vaults is held in the outer area of Celesthem. Either the previous High Priest, if available, or a member of the Aletheian Royal Family will bestow the honour upon them, blessing them with divine power and wishing them a prosperous term. Occasionally, outsiders from planes linked to the Temple (such as Heaven, Nirvana, and the Axis) will attend this ceremony to give their own speeches or bestow blessings on the attendees, but this is rare and should never be expected.

Most importantly, the High Priest is the one in charge of leading the annual ritual of purification. On the first Sunday of Sarenith, the High Priest and their chosen assistants - always powerful divine mages - travel to the Sanctum of Light and perform the ritual that prevents Tenaerul's fell energies from spreading across Valathe.   Aside from this, the High Priest must maintain equilibrium between the many faiths of Celesthem, and often functions as a neutral party in disputes that arise. They also decide upon and enforce the Temple's rules (such as the visiting schedule), and act as a guiding hand for any questioning visitors who may need either religious guidance or rare knowledge. The wealth of information they possess, and their neutrality in matters of religion, makes them an important ally to any arcane scholar who seeks aid - whilst some churches may refuse them access, the High Priest will only do so if they feel that the information bestowed could do harm.

The position of High Priest comes with full accommodation and an incredible amount of magical and political power. The artifacts and books they gain access to bestow great knowledge upon them, and many High Priests struggle at first under the burden of information, often relying on equally-powerful entities (such as the Royal Family, other High Priests from afar, or even Archmages) for help in processing it all. Over time, however, they come to be incredibly wealthy, wise, and powerful pillars of society that many lesser bureaucrats envy - for very few are allowed to be so close to the Emperor without careful political games. Most High Priests only value this power and wealth for what it allows them to accomplish, however, and actively seek to improve the world through beneficial acts. 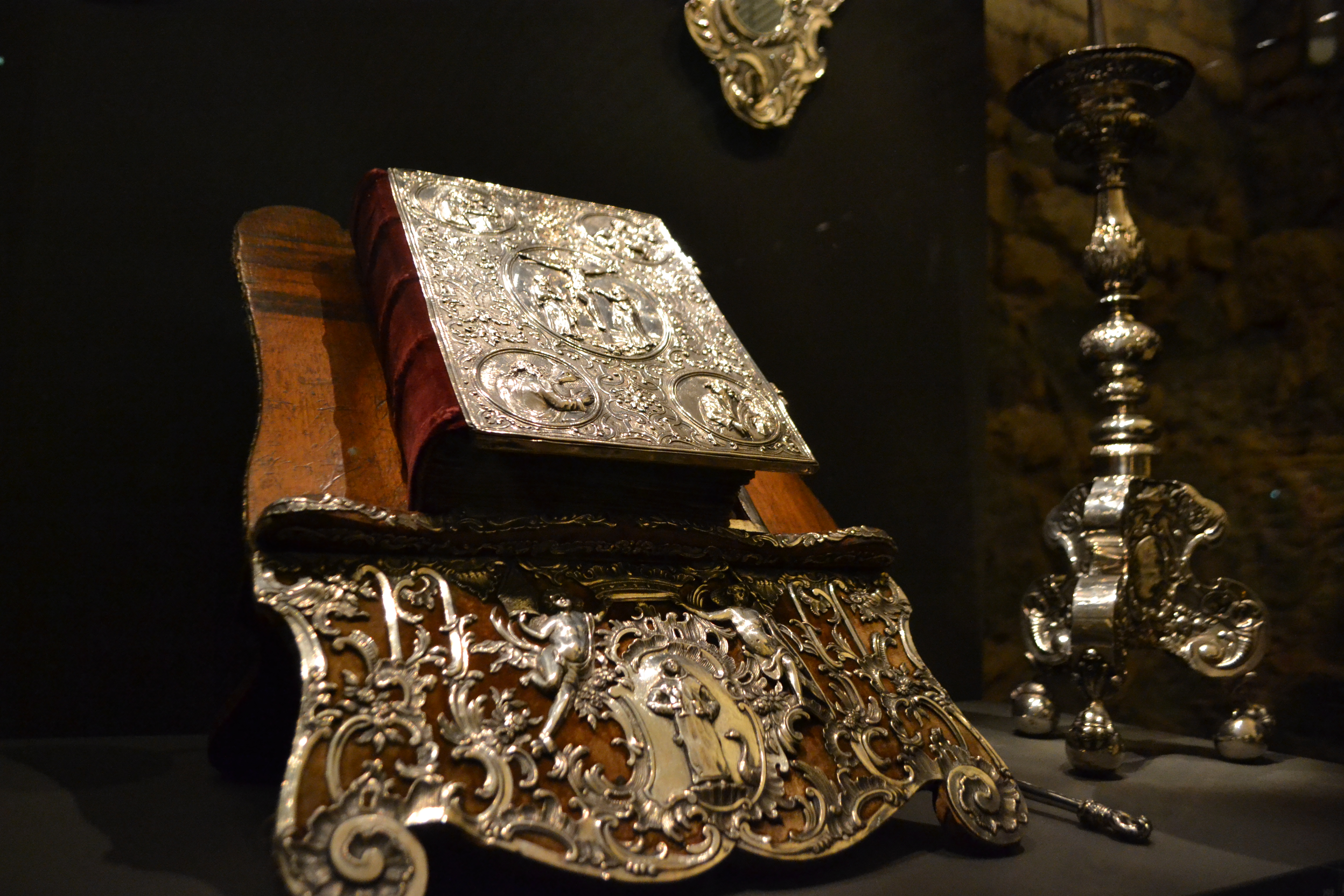 Holy Book by Hanhula
High Priests typically wear robes of white, embroidered with gold, silver, and the holy symbols of the current faiths within Celesthem. These are not ostentatious outside of large religious or royal affairs; a High Priest is not appointed to show off the Temple's monetary value, after all. If they openly share their own faith (as is standard), they will often wear their holy symbol on a small necklace falling over the robe.   They have unfettered access to the Temple's many Vaults, and often are called upon to use deific relics in holy rituals (or, in some cases, to simply supervise them). Depending on current events, the High Priest may choose to carry certain religious artifacts upon themselves for protection - this has proven instrumental in saving their own lives, and those of their clergy, in the past. It is rumoured that Aetha Tinuval has recently secured a number of these artifacts to protect the Temple from the ongoing war between the Aletheian Empire, the Medimian Empire, Terenholt and Ordan.

If a High Priest has severely violated the Temple's doctrines, it may be necessary for the Temple Priests to convene and have them removed. A large majority of the Temple must agree to this process, and they must then call upon the guidance of their gods to ensure that their decision is truly what is right. If all signs are in agreement, they may confront the High Priest as one and demand their resignation from the post. Should the High Priest refuse (which has only happened once), combat is permitted.

High Priests of all religions have existed since clerics first came to exist upon Istralar, but this particular position was established far later, at the birth of Celesthem Temple.   After the Worldrend, Ypolita Ouranios, then-Champion of Iomedae, had noticed a dark stain of corruptive energy upon western Valathe. She had failed to stop it through standard means, and thus gave her life to form an impenetrable shield of light that would forever protect the surrounding land from the taint's spread. The shield held for thousands of years, surviving through the formation of the Aletheian Empire and the fall of countless demons that would seek to destroy it. Unfortunately, all good things must come to an end, and cultists of the Destroyer - Rovagug, imprisoned feller of worlds - would eventually betray the shield's guardians and unleash Tenaerul's devastation on the Empire.   Clerics and divine scholars across multiple faiths met to devise a solution to this onslaught of corruption, eventually settling on a ritual that would use the waters of nearby Lake Kelestra as a focus for their powers and allow them to repair the shield with energy of their own. It worked, but the repaired area was fragile - it needed reinforcing. To aid this, Celesthem Temple was built as a place to house the powerful scholars and their curious pupils, and as a place of pilgrimage for those wishing to thank Ypolita for her sacrifice.   The first High Priest, Julian Telesphorus of Syronicea, was one of the lead researchers into the ritual, and as a follower of Sarenrae, was mostly neutral in inter-religious affairs. It was he who arranged meetings with the other faiths involved and created the rules of succession for his role, and it was he who aided the growth of Celesthem Temple into one of the largest bastions of the divine through his dealings with extraplanar beings (such as angels, djinni and archons) and with their archetypal enemies - the wielders of the arcane. Without the cooperation shown by St Julian, many relics and significant books would still languish in the private collections of wizards.

Type
Religious, Clerical
Status
Active
Creation
~700 years ago
Alternative Naming
High Priestess (if female)
Equates to
Likely the equivalent of the Archmage of Thrinda's Arcanium or of the Mages Guild.
Source of Authority
Appointed by the Temple Priests and anointed, effectively, by the Divine
Length of Term
Until death or retirement
Current Holders
Related Locations
Related Organizations

Since you mentioned the spellcasting level requirements, I'm curious: Are you going to turn this into a prestige class with full rules? :D

Hahah, no, that'd mess a few things up! It's a /very/ exclusive role. Spellcasting levels are something in-character, I must note, as I found that to be an easy way of managing magic in-universe. Means the academies can test on specifically first-level spell knowledge rather than something more vague.   (There's a lot of plot I'll one day be able to add to this page. Let's just say the current High Priestess is a fun person.)

I guess that makes sense; it'd be like having a prestige class for "The Pope".   What kind of political powers do they have? Just genera political clout and Emperor-access? Have they ever used it for any notable (or scandalous) historical events?

Wowzers, sounds like one heck of a process to get a high priest/priestess . Sounds almost like a pope appointment.   I wish I could leave things as feedback, but everytime I got a new question you answered it in the next article. I can only say well done as usual.

What exactly does level 7 spellcasting mean? In comparison to our world: Would it be equivalent to a PhD? Or more like a Doctor title? Or even higher? Also, did you intentionally use a christian bible as a holy book or was it just the one that fit most because of the golden ornaments?