To follow development and see what's planned next for the Helyk and other Kinds page, Join the Ethnis Discord!

The Ireheart are a Kind designed to withstand the brutality of modern age combat. They were the first synthetically-made Human Kind, after the natural evolution of the BleakHeart opened humanity’s eyes to the possibility of engineered evolution. Their bodies brim with strength, competing with the Kajh and Parisan, and their blood is designed to elongate their combat duration.

Besides the physical, the Ireheart also has a unique mental ability: They can enter a psychological numbness and increased adrenal output. In this state, they can carry out tremendous feats, and ignore some of the most daunting mental stresses the universe has to offer.

They are often described as passionate, intense, focused, hardy, unfeeling, and brutal.

Irehearts are a constant reminder of the duality of man. They can be the best of friends or the nastiest of enemies. Undeniably loyal to their allies, absolutely relentless to their foes.

Broad shoulders, broader chest, and a hulking form frames the strength that they wield in battle. Their arms are engineered to heft more weight than most humans, allowing them to wield heavy weapons and throw a bone-shattering punch.

Their facial features are well-defined, chiseled, and full. They stand a solid head taller than most other human Kinds.

The first few generations of Ireheart were Eurasian in nature, this genetic path lends a pale skin-tone to a majority of Irehearts. It is not unheard of for an Ireheart to have other natural skin-colorations thanks to the passage of time and ability to have offspring with other human kinds.

Ireheart Eyes are a range of intense blues, golds, and oranges. When they enter their trance, the blood vessels in their eyes burst, resulting in them weeping blood. This condition subsides less than a minute after exiting their rage.

Ireheart abilities are focused on being lethal in a battle and avoiding the traumas associated with the horrors of modern-day combat.

An engineered adrenal system allows the Ireheart to enter a rage-like trance. During this stage, an Ireheart feels little to no emotion, and gains a tremendous strength. How long or violent this rage will be can vary based on the situation and the Irehearts self-control.

Designed for wartime, the Ireheart has engineered blood cells that coagulate around open wounds at a tremendous pace. This allows them to outlast wounds that would prove deadly to most Kinds.

We hold a rich history, throwing ourselves at every battle that humanity has taken part in. In today's world, we still serve in every corner of the galaxy. We are made for conflict, and that is where we thrive.

Ireheart are the product of an ambitious undertaking: build a genetically stable superhuman. One that would be capable of passing their genetic modifications through their bloodline. They were built on the foundation of centuries of research into genetic manipulation.

The final piece of the gene-modifying puzzle was granted through the research into the naturally-occurring mutations that formed the Bleakheart.

The passage of time has brought great change to the IreHearts. New strains and bloodlines have emerged, and they've lost a strict alignment to any one Banner.

The Church of The Somnolent prefers them as soldiers, but all of the Banners tend to welcome and employ them in one way or another. Their natural strength and ability to wreak havoc on the battlefield is welcome in a time where conflict is a constant inevitability.

The culture of the Ireheart is one of pride and loyalty. Throughout history, they have served as part of a multi-kind unit rather than fighting in bands of Ireheart. This inclusive history in combat leads them to mesh well with other individuals that tolerate their rage.

Many Irehearts are forced to seclude themselves in civilian life, where their rage abilities can lead to a stigma of uncaring violence just waiting to erupt.

While an overwhelming majority of Ireheart have innate control over their rage, it is still a misconception they have to deal with, especially with other Sophont.

I am the spearhead and the foundation of my allegiance. I can bear the weight that my companions can not, and I bring righteous fury to whomever brings transgressions upon me or my comrades.

The Ireheart are designed for conflict, and often seek out jobs that take advantage of their natural skillset. They can be found serving in roles that may require them to get their hands dirty, which is where their rage can help.

Peaceful Irehearts will strive for jobs that employ them for their strength over their combat abilities.

Irehearts join parties to adventure or serve with. Their strength and abilities make them an invaluable asset to most groups that may encounter a good helping of muscle.

Many Ireheart enjoy the thrill of a good fight. They may travel in search of conflict or skirmishes, looking to make a name and use their abilities as intended.

A large majority of Ireheart names derive from Eastern European or Northern Asia.

Ireheart are playable in Ethnis Lite! Supporters of Ethnis see RPG info on this page! 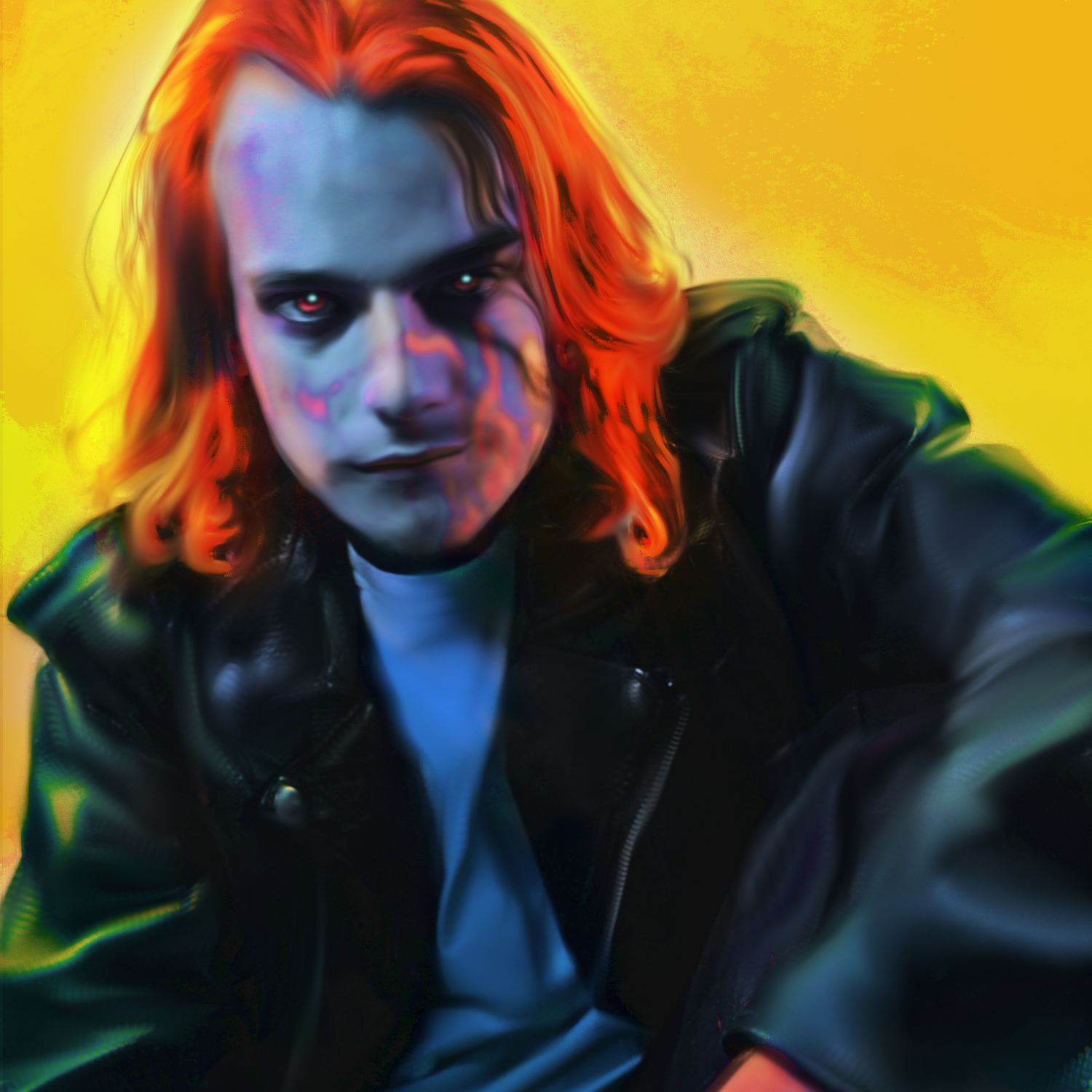 The Church of The Somnolent
The Federation of Free Planets

You have control over your rage, and wield your strength only when it is needed. You know the stigma and dangers it can bring, and you serve your position in life with your rage serving as another tool on your belt.

You sit just below the boiling point of your rage. You are ready to pop into rage like a faulty Impact Gel can. That blinding anger erupts at the blink of an eye, and vanishes just as quickly. Some may call you hard to control, but they are just asking to have their teeth pushed in.

Your rage is a dangerous beast- the Mr. Hyde to your Dr. Jekyll. You do your best to control it, to keep it down. If that beast comes out, you fear what sort of monstrosities you might commit. Not like you’ll be able to remember them.

Playing as an Ireheart involves being a strong arm and survivor of the party. They can deal devastating blows, wield heavy weapons, and counteract sanity damage through their rage.

The personality of an Ireheart can be a good reflection of the tribe the player chooses. An Ireheart can be utterly pedestrian, or they can always be on the cusp of screaming their way into a fistfight.

Ireheart NPCs serve as military, law enforcement, or other physically-demanding roles, so players may run into them if combat becomes a common theme.

Irehearts may also take part in gang or criminal activity as enforcers, so they may make powerful adversaries.

Irehearts can make fantastic mercenaries or other protective roles for the party.

Irehearts can also use their muscle to make other options accessible for players who aren't combat focused.

Josephine “Josie” Cooper has found her lot in life knocking the teeth out of her opponents in the rusty-metal fighting ring of her home. Her trick is in the timing of her rage with her swings. The moment the bell rings for blood, she lashes out with colossal swings. Some opponents recall her blood-shot eyes rolling back on the first punch, like a shark preparing to rip apart a seal.

Some label her a cheat, others believe she is supernatural—no matter what they call, she always offers her hand to pull them up once the bell calls the K.O.

“If you plan on stepping up to me, you best be ready to fall.”

As they say, Justice is blind; so what does it matter if Frank Petrov deals out his own on the side? At least that is how he justifies his actions. The scum leeching off his home took everything from him, so it is only fair that he takes everything from them.

All he needs is his trusty big-bore to deal the damage, and his rage to ensure the blood doesn’t haunt him. There is no mercy, not for the monsters that lurk in the darkness of the alleyways.

“I don’t care who I kill, what use is remembering a corpse?”
Human