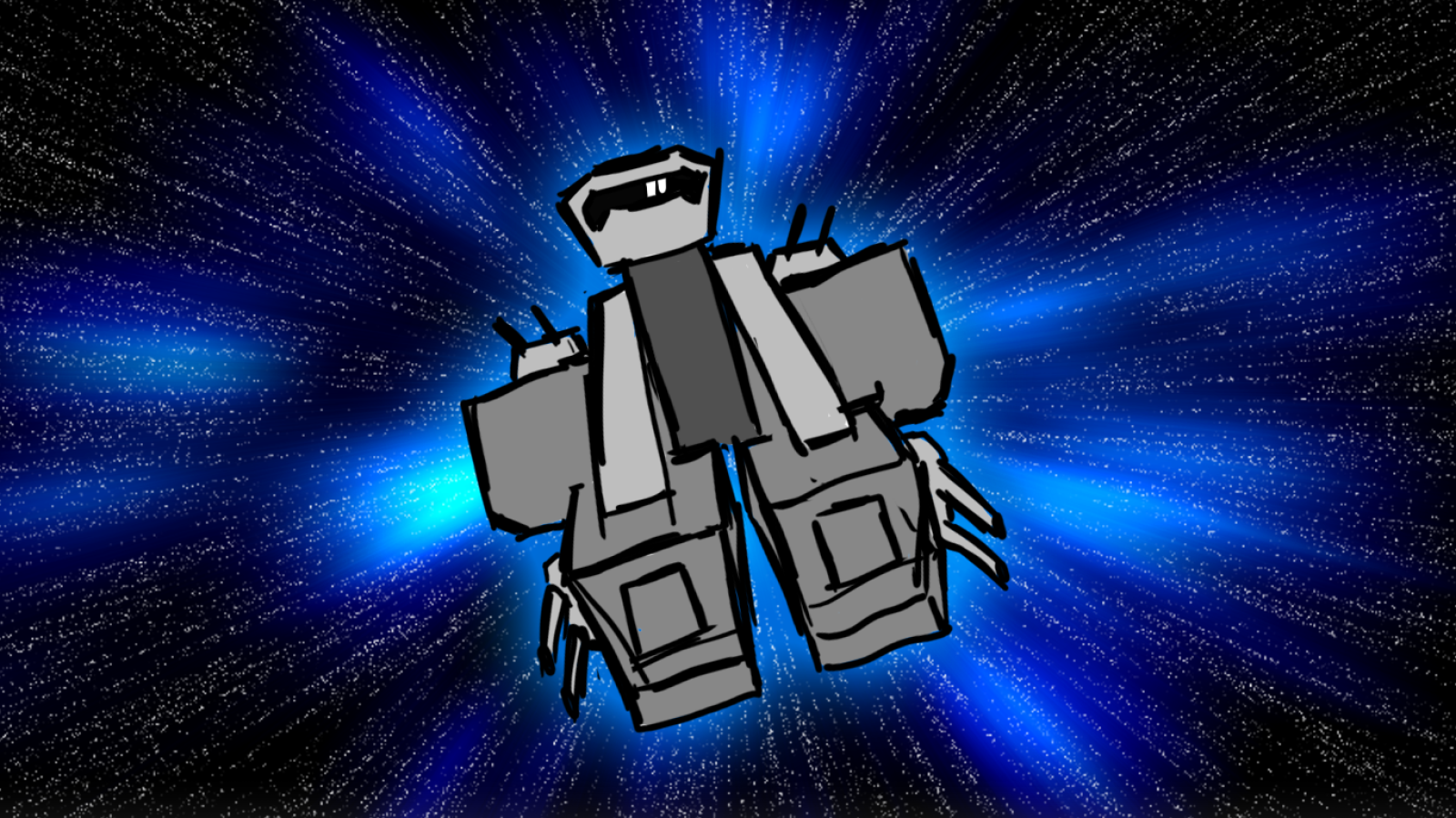 Betty Mary is the space corvette owned by Rubin Bones. Modified from an old military starship, he loves it so much he named it after two individual feminine names. Combined with its powerful defenses and incredible durability, Betty Mary is truly his castle and his keep. 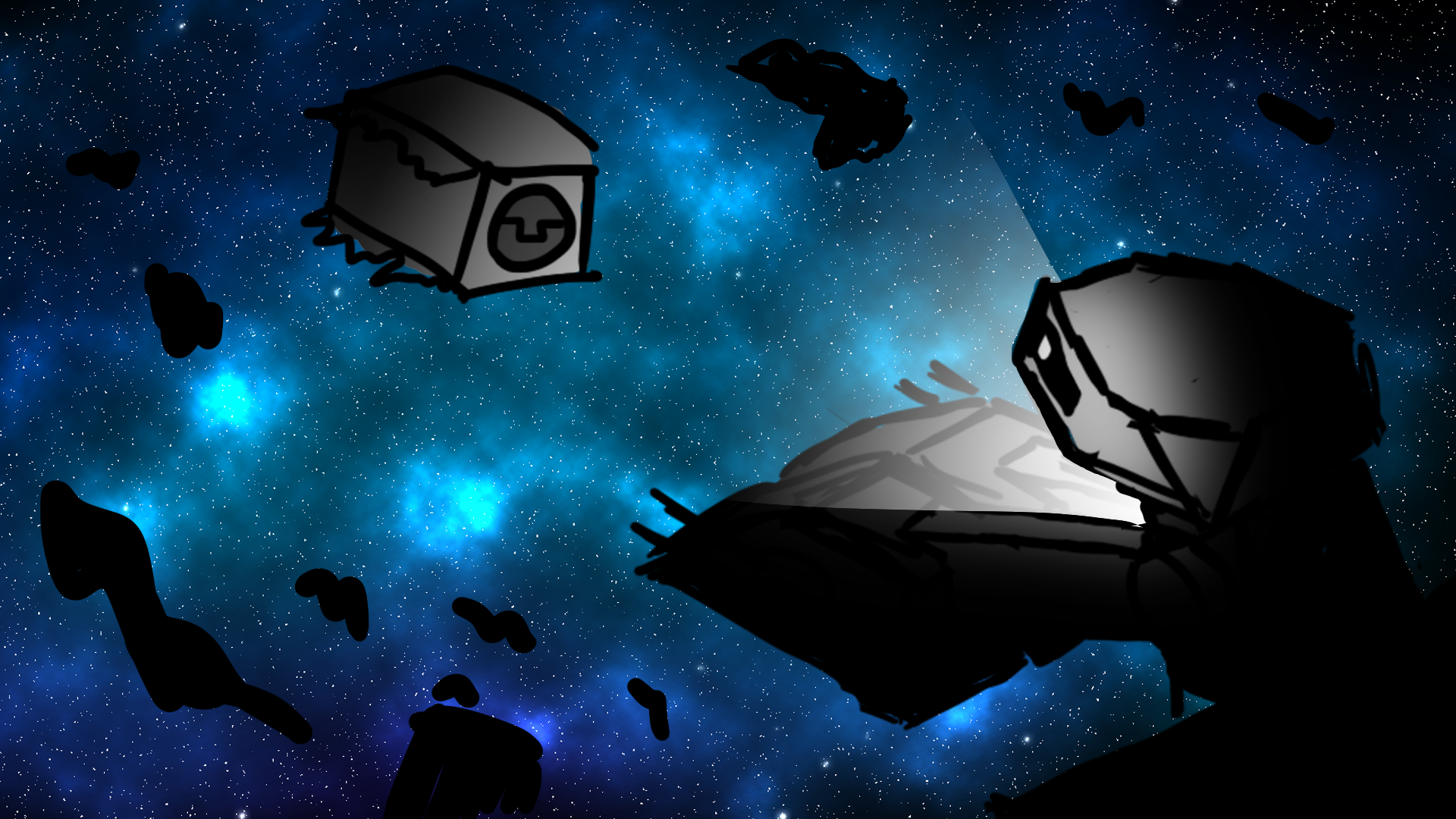 The Betty Mary was manufactured by the Mulatos State for small combat vessel, with 5 crews minimum. an estimated 50 ships were made before it's discontinued by the government due to its complexity, but they still used it nevertheless.

One of the ship, codenamed MSP-035, went missing. The government attempt to search for it but had no hope, declaring it missing in action.

This was until Rubin Bones, the lone smuggler, appeared with that ship decades after its lost. Without catching him, no one will ever know the reason since all log was never been sent back, locked away with the ship now known as Betty Mary.

Bodies floated, walls scratched, bloodstains spatted across the wall. That's all I can tell.
— Rubin

The ship is made of two separated hulls connected by heavily shielded rotatable arms.

The pair of front hulls functions as the main weaponry, equiping two high-powered turrets and a tractor/mining beamer. The back hull only has two turrets however, it holds much of the ship facilities.

Rooms inside the back hull are designed to prevent any intruder to easily get into the living space. Rubin modified it during his vacation to be even more secure.

There are crew quarters next to a sick bay operated by BETTY. It's located in the most located to protect the crew in case of any intruders. Nowaday it's turned into the prison, with a few beds left and door reinforeced.

Despite a cargo bay with a boarding ramp, the center deck is the main living area to keep up the crew's morale and health; a kitchen, bathrooms, and a recreation room.

Mostly back-end organization. There's the engineering bay so the machanic can access the engines, life support system, and shield generator. There is also a docking pod.

Between this and cockpit has a back turrets control room. A small seat to control a pair synchlonize turrets. It's also the passage to the arms for weaponry's maintenance.

The main brain of the ship; A pilot console, a main computer, a set of hologram projector and holostylus, and a large window.

Due to its design, the front hulls can rotates to the bottom of the ship, providing an ability to stabilize the ship. On deploying, both arms rotate front hulls upward to parallel the back hull. Crews can only interact with front hulls are in this formation.

It's possible that the ship can stand on its own with only front hulls, sticking to any surface without notice. Only work in space, of course. 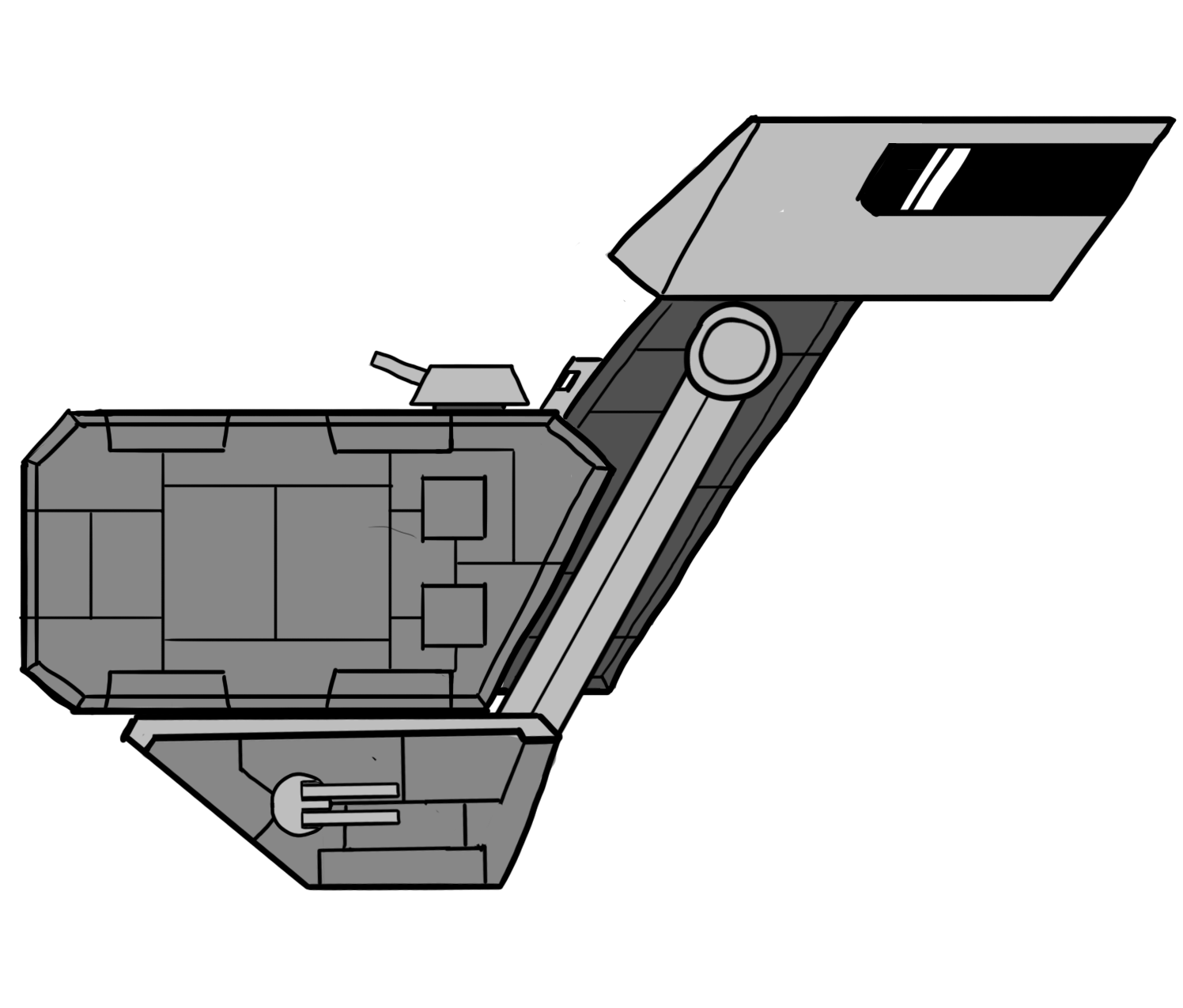 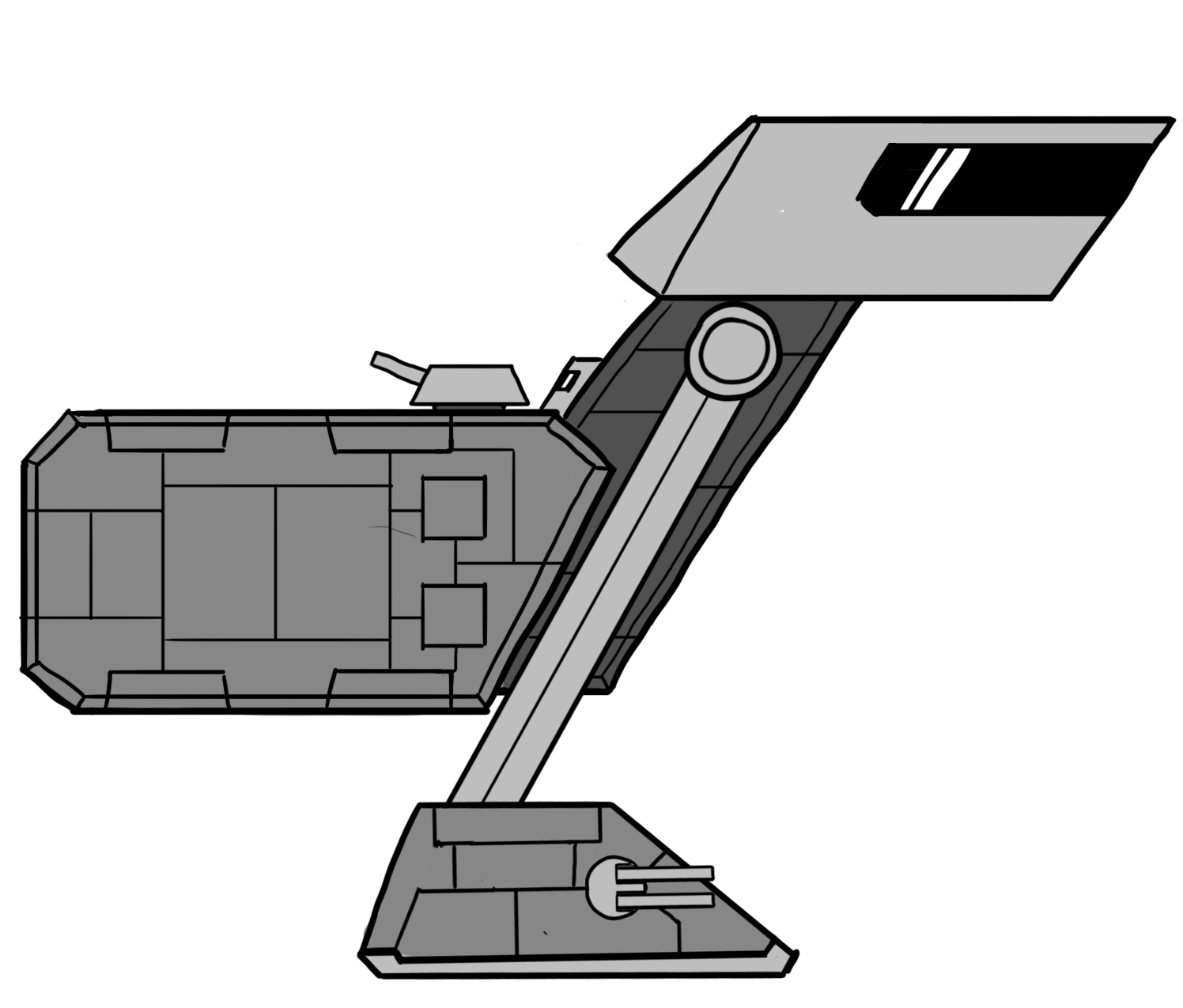 It's powered by the nuclear reactor, which charge all the main battery. Most of its energy has been used for jumping, so the battery must be ensured to not deplete.

Despite a powerful , the speceship's essential component, Betty Mary uses high-powered ion engines, and arrey of smaller one for every side, resulting in fast and stable vessel. However, when it comes to jumper, the speceship's essential component, it comes in pairs. Both jumpers can be accessed via the engineering bay, passing above the cargo room.

The pair of front hulls functions as the main weaponry, equiping two high-powered turrets and a tractor/mining beamer. The back hull only has two turrets however, it holds much of the ship facilities.

Duel Turrets are the system that let a single gunner controling two turrets at the same time. Using the symmatrical derivation to calculate the unmanned turret rotation into the gunner's line-of-fire. It's controlled via turret room at the upper hull.

Front Duel-turret is installed vertically. Unlike the back, it's directly controlled via the captain cockpit.

Tractor beam can effectively pull any object toward her, but because size's matter it usually look like she's being pulled instead.

On the foremost installed the powerful mining beam, able to pierce anythings on its way.

Despite having a ridiculous design she is heavily shielded, with highly durable armour (especially the arms) and auxiliary energy barrier.

For navigatingthe ship, she use Pocket Galactic Map, along with her sensors in order to make a accurate jumping.

The ship contains a modified jamming device helps her cloaking from any radar of the enemy ship, particularly on smuggling mission or attempt of escaping. It's also have the organic sensor that can detect any lifeform's vital signal which has been used during his revenge mission.

According to the ship's schemetic, Betty Mary is supposed to be control by a minimum of three crews. Rubin, who capable of latter job however, manage to handle this situation. He has a special assistant, who never get out of ship since she's not an organic matter - the name is BETTY, a mysterious artifical intelligence he got during one of his advanture.

She can control any aspect of the ship—From calibrating the navigation system, to turrets aimming for defense system, and even healing any crew's wound through medical bed at the sick bay. As time goes by, she become not only the multipurpose assistant, she is something Rubin like to be in a relationship with.

Oooh interesting! I already love the little titbits and details you've put in here so far. :D I wonder what adventures Rubin will have with Betty and the Betty Mary!   Keep up the good work!

Thank you! :D That would be a lot of fun thinking about! (if not include describing such idea)   Until my mind becomes clearer I'll drive with it at full throttle.

That is a rather unique design for a space ship, and it looks pretty good! Also, I like all the art.

Very cool! I dont know why but the two formation pics suddenly made me think of the robot maid from original cartoon The Jetsons!

I second this. Wasn't that Betty too?

I like the article but it was fun to see your dates and writing plan in the author's notes too!

Haha, thanks :D Sometimes I become too curious in such crucial decision.

Nice article! It's an original shape for a ship. It would be interesting to explain why this design was chosen despite the arms forming a vulnerability. It looks very cool (and your illustrations look great :D ), but I don't think that was why the government chose that design XD I think you could also state near the start that it's an airship just to clarify, even if it becomes clear later in the article :p   You say that the ship has been designed for a minimum of 3 crews several times, but then you also say once that it was initially designed for a minimum of 5. Is it a maximum of 5 or did the government changed its mind partway?

Late reply but thank you for the comment! I think 5 is the maximum crew. With a minimum of 3, they add the navigator and the doctor for maximum efficiency.   The reason why the government chose it? I didn't know but they found a way to fix its flaw eventually.

Very cool ship. Also, great work on both article layout and on your illustrations. One possible edit, while i understand that the length is variable, it looks in you map that the back of the ship to the front of the ***pit is farther than the ship is wide, so i would swap the length and beam dimensions (beam is the ships width at its widest point or waterline, usually)

Thank you! I'll take that.