The heart of both Troth's rivers as well as its commerce, Loch Mesner often finds itself as the meeting point of numerous interests in the republic.

Loch Mesner sits at the approximate geographical center of Troth, fed water by the Delphic river from the Northern Soltian mountains and the Alfric river from the Wulpine Mountains to the south. The Loch then feeds out into the Nordic river to Nordengard and the Indo Sea beyond.   The land surrounding the Loch is made up of the Trothian capitol city of Sonheim, making the lake both the commercial and political center of the republic.   In the center of the Loch lies an island on which the Silver Palace, a refurbished military fort that now stands not only as the meeting place of the republic's ruling council and leaders of industry, but also serves as the central command for coordinating the various boats and barges sailing through the city. The palace is connected to the Loch's shores by raised bridges that allow crafts to pass beneath. 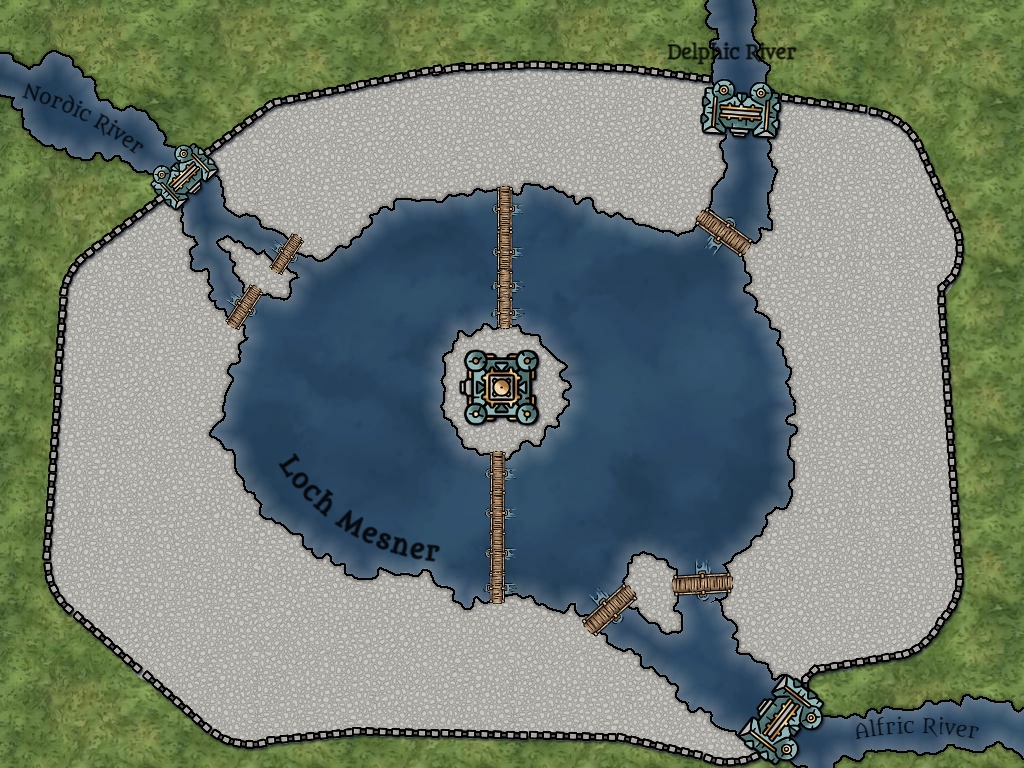 Given how Loch Mesner is fed by two of the major rivers in Troth and feeds out into the third, the Loch and the city that surrounds it serves as a major hub for trade and commerce. Raw materials such as metal ores, coal, and lumber come into Sonheim on barges and are processed by local manufacturers and artisans into goods like weapons, tools, and furniture. This emphasis on trade is a large reason for Sonheim serving as the seat of political power in the republic.

Loch Mesner has been known to experience a slower rate of barges delivering materials from its tributaries in mid-late summer through autumn due to the typically low seasonal rainfall causing drops in the rivers' waterline and current. Such currents are renewed in late winter and spring as snowcaps in the respective mountain ranges melt off.   The dip in shipments during the summer are somewhat balanced out by the seasonal surge of freshwater fish that migrate to the Loch each year, often causing a boom in the local fish markets. Inversely, the fishing around the Loch becomes scarce during the winter when most fish are hibernating upstream.

During the days of Calian rule, the Silver Palace (then a military fort known as Mesengard) served as the main meeting place of the northern nobility as they discussed and devised their secession from the kingdom. Once the secession came, the fortress became the central command for coordinating forces to repel attempts made by Calios to reclaim their domains.   Once Calios was forced to recognize the secession of their northern territory and Troth became its own republic, Mesengard officially shifted from being a military outpost to a political center as it remained the location for the new central government.   As the Loch became both the political and economic center of the republic, the handful of villages that dotted its shores began to grow and merge into what is today Sonheim.   Such growth did not come without its pains, though, as the increase in trade made smuggling operations a common occurrence. While there has been back and forth between law enforcement and smugglers for decades, the greatest blow to the illegal operations came during The Meridan War in the form of harsher crackdowns with the aim of preventing Calian agents from infiltrating the republic.

Loch Mesner is known for its freshwater fish, making the local fish markets a popular attraction during the summer months for those looking for a delicacy. Looking more broadly at the surrounding city of Sonheim, visitors may explorer the various theaters and cafes of the entertainment district.   For those wishing to take a memento of their visit, guild row is home to a number of smiths and artisans willing to sell their wares direct.
Alternative Name(s)
The Lake of Commerce, The Heart of the Republic,
Type
Lake
Location under
Sonheim
Owning Organization
Republic of Troth

Kinda glad about the prompt of this month's challenge. Given that Troth's trade system is built heavily off transporting goods over rivers, this is something I really needed to hammer out.   Hoping to make a map to better depict the geography of the area.

Nice read. This indeed seems like a great location for an important city and I can see why it became such a trade hub. I also like the detail that it was originally several smaller settlements that merged together.   On your map it seems like everything is walled including with gates on the river. I wonder how large these would be in reality. Are they more bridgelike structures or do they hinder the flow of the river a lot?

Thanks!!   As for the river gates, the image I have in my head is that they're basically guardhouses that stretch over the river with a set of portcullises that block boats without affecting the river itself.

The history and geography and trade integration was all really nicely integrated together. There's a lot of detail, and it's all cohesive and seems to fit well with your information on Troth as a whole. I was wondering (I didn't see an explanation in the text) what that little island near the bottom of Loch Mesner is used for, if anything.

Thanks! The island is just a random bit of land I put in to break up the mouth of the river. Practically speaking, I could see it used to mark the In and Out lanes for the river.

This was a nicely contained ecosystem. I would just recommend expanding on the types of animals that live in an environment completely surrounded by human habitation.

Thanks! I'll think about the list of animals. I don't want to just make a list of salmon and haddock since I feel like that would basically be fluff details that I'd likely never use in-story.

I like the way they really fenced things off. Would smugglers be able to send out folks underwater while waiting at the gates, or do the portcullises go all the way to the bottom?

I don't really see typical smuggling operations having someone swimming under the gate since that'd be pretty inefficient (not to mention really hard finding a place near enough to the gate for the swimmer to surface without getting caught).   Might work for a drop for spies, though, so I'll keep it in mind.

So I will write that this is a good little article that fills up your world I would say. You have explained the importance of the area I would say with this article. The map helps out in understanding how the area looks.   Interesting take on the "ecosystem" of the lake, or rather of the trade. As you explain it sounds a lot like an ecosystem to me.   Small Note: Missin the "t" in "the Loch" and "the city" in the third paragraph of the first heading   Well done!

Thanks!!! Fixed the Ts. Weird they were in the same paragraph.

It happens, when you focus so intently on your worldbuilding the words just become "correct" to your eyes without you knowing it. (I recommend using Grammarly if you want help spotting does errors in the future, the free version works well with WorldAnvil)

Nice article, I like the focus on commerce and history with all the detail. Though I do wonder what the actual flora and fauna of the area would look like, if any of it is worth mentioning at least.   Those guard houses on the river make me think of the River Thames in London. The old bridge had so many piers that it affected the tidal ebb and flow, making the water level downstream of the bridge up to 6 ft. lower. It even slowed the water enough for it to freeze in the winter, enough to have fairs on the ice. But with the current design and its fewer piers, the water runs too quickly for that.

Thanks!   As much as the flora and fauna would likely help flesh things out further, I honestly can't see those sort of details coming up in the broader story. At least, not enough to warrant the research I'd have to do for it (biology/ecology were never my strongest subject sadly).

I liked the history section and the fact that the small towns grew organically and you didn't ignore the fact that these sorts of things can cause higher crime rates. It's short, but I don't feel like there's anything, in particular, I'm missing out on to understand the importance of the loch.   The bridges really pique my interest though. Were they originally on both sides of the island, or was one built well before the other to limit ingress to the palace? Do they have an emergency feature that can isolate the palace in case of attack? Have the bridges ever been damaged or needed to be rebuilt to accommodate larger ships?

Thanks!!   I could see the original fort having one bridge with a second one being built as the locale evolved into a city and traffic to and from the palace became more of an issue.   As for a defensive measure to isolate the palace from attackers, the concept has crossed my mind, but I feel there'd be a need to figure out a possible escape route so the resultant siege wouldn't feel like it was just delaying the inevitable.

Came here to show some love for actual Rivers & Waterways submissions, this is great! I love reading about the interplay between water and human life, and hub cities are such a great expression of how water can be used to facilitate development, culture, and socioeconomics.

Thanks! There was a good chunk of details that this challenge made me realize I needed to work out, so this was a good chance to lay some ground work. I know your entry doesn't fit with the criteria of the challenge, but it was still great and got my attention.

Nice map! I liked the details about the city.

Thanks!   Was a little nervous with this being my first city map (I hate doing the individual buildings and roads)