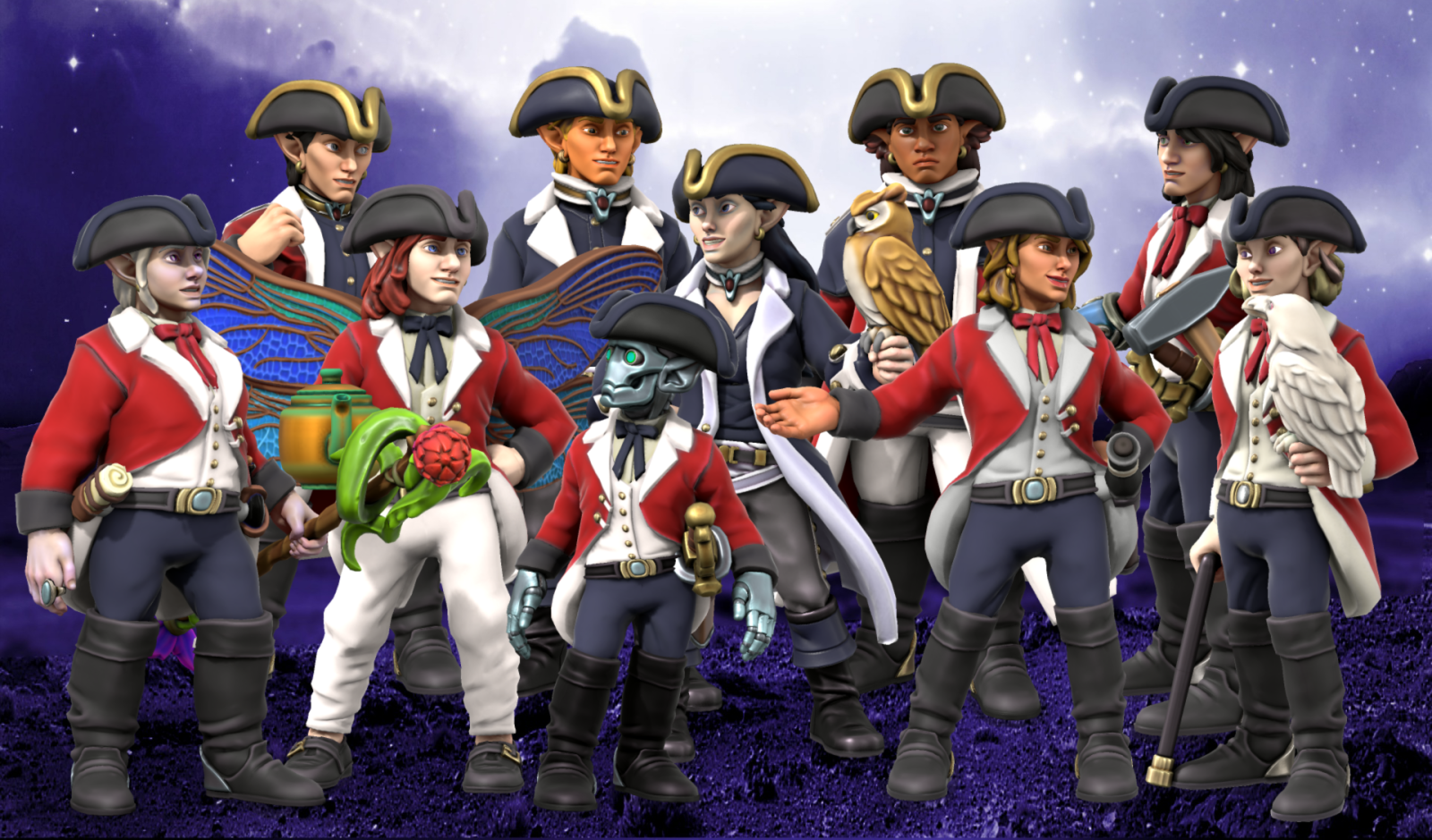 The Voidchasers are an elite group of Avalonian Imperial Navy "Bug-Men" and the crew of their ship. In the course of their career, they sent the report that launched the First Interstellar War (IW1), received numerous medals and Mentions in Dispatches, and, on two different occasions, arguably committed treason.   The Voidchasers include a number of members of the Imperial family of the Celestial Throne of Avalon outfitted with mithril "Bug-Suits," the best technology available to a marine in the Avalonian Imperial Marine Corps. Unbeknownst to those young imperials, the crew also contains a number of bodyguards, specially trained to protect them.

Individual, according to preference

The unit is commanded by Commodore Selene Wintermist Sunfall. Answering directly to her are Navy Captain Ruavel Sunfall and Major Airaion Mithethas.   Beneath them are Marine Captains Lylas Madrimlian and Alesander Tremayne.   Beneath them are Marine Lieutenants Xerxes Radiant, Yazma Snowwind, VonVin Starsong Radiant, Crowley , Ardan SpellSword, Dazzle Kat and Nimolin Opalarbour.   Below them is Marine Ensign Luwraek, then Sergeant-Major Yvoleth Oleander. Below him is Colour Sergeant Barbarossa Blackfinger and then Corporal Aerin Skywing . Below them are the rest of the crew.   Recently, Xerxes Radiant, now King of Glimmerfell and the elven nations of the Telasian System, has "semi-retired" to rule his kingdom, and Yazma Snowwind, who is directly in succession to Imperial Heir Selnaris Khi'Marinae has discovered she is pregnant and has retired to serve the interests of the Imperial Crown. Yvoleth Oleander has been assigned to her continued protection.

Specialized Members of the Crew

Yvoleth Oleander is a crack marine and an undercover Imperial Guard. He has been given individual orders directly from the Imperial Crown to protect the Imperial Princesses, and "get their asses out of the fire" should this be necessary. The same orders were also given to Jhaelim Silverdancer , a crack Star-Pilot and advanced mage with specialized training, and Alesander Tremayne, who lacks Oleander's marine training, but who is a gifted navigator and Druid.   Lylas Madrimlian has secret orders from the Imperial Crown to begin the formation of a "black ops" marine unit within the Voidchasers. To that end, he has recruited Crowley, Dazzle Kat, Nimolin Opalarbour, and Private Aerin Skywing.   Luwraek and Crowley have officially "retired," but are actually on extended black ops missions for Imperial Star Command.

In a frigate, the Voidchasers typically engaged forward scouts, gathering intel and preventing intel from getting back to the enemy.   As "Bug-Men," the Voidchasers are far more effective. They can individually assault and take out an entire ship's crew, as an independent small unit with their own tiny Starfaring Engines strapped to their backs. They are an elite Special Forces attack unit who specialize in targeted eliminations.

The Voidchasers receive Navy and Marine training, which involves instruction in siege weapons, hand-to-hand combat, and magical combat and tactics. They have also pioneered Bug-Men training procedures, which includes maneuvering the suits in space and atmosphere, insertion training, and demolitions.   Within the enlisted of the Voidchasers, there are also a number of individuals who are trained in protection and extraction procedures, with orders to, if necessary, remove Yazma Snowwind, Selene Wintermist, and VonVin Starsong Radiant in that order, since that is the Order of Succession.

The Voidchasers are given the best resources the Marine Corps has available, under the fiction that they are an experiment, being the only AIMC ship in the fleet.   The use and repair of the Bug-Suits is funded through the Imperial Crown.

The Imperial Princesses have been given a means to contact the Imperial Crown Prince directly at any time. They have already taken advantage of this ability to pass on essential intel as quickly as they possibly could. In effect, this provides them unreal logistical support, as their archmage father can likely send them just about anything they might need in a few short minutes. There are some limits to this, in that anything or anyone he might send must be able to step through a magically created portal. This means response is limited to a few crack individuals and the resources they can carry. It does not involve the instant moving of ships or armies.

Each Bug-Suit costs 6000*N to build, and about 1000*N to maintain. Monthly, the Voidchaser itself costs about 12,000*G annually to run and maintain.

The members of this unit are specially chosen through a double-screening process. Appropriate candidates are vetted and then dropped in a place where Captain Wintermist and Major Airaion Mithethas are likely to recruit them. They are then vetted and selected by the Commodore and the Major.

The Voidchasers began their career as Midshipspeople aboard the Arianrhod's Pride , a dreadnaught detailed to the Telasian System Fleet. They aided the colonization of Peridot and policed pirates in the system.   The Arianrhod's Pride was detached to the Draconian System on a diplomatic mission to the Draconian Empire, and while they were in system, tensions with the Fomorians of The Solstice Pact heated up. Having recently acquired their own frigate as a prize ship, and possessing a number of Bug-Suits that had been acquired on a whim by Prince Xerxes of Telasian for his friends, the Voidchasers (named for their new ship) were assigned to the Avalonian Imperial Marine Corps and sent out to scout, acquire intel, and eliminate targets of opportunity. As an elite space marine unit, they were responsible for significantly reducing the number of Fomorians in the system. They were also the ones who discovered the Fomorian Fleet amassing at the brown dwarf Ballock. Their intel launched the First Interstellar War (IW1) and warned the Telasian Fleet of the coming invasion.   The Voidchasers raced to beat the invading fleet to Telasia, and managed to give them a week of warning. However, it wasn't enough. The Telasian Fleet was devastated by the overwhelming force, and the Voidchasers suddenly found themselves among the highest-ranked officers left alive in the system. By order of the Crown Prince Selnaris Khi'Marinae, Selene Wintermist was promoted to the rank of Navy Captain and designated a Commodore, and given command of the remnants of the Telasian Fleet. Airaion Mithethas was promoted to Major and given command of the remaining Marine Corps. Ruavel Sunfall was recently promoted to Post-Captain in the Navy.   The Voidchasers have effectively been in command of the ragged Telasian Fleet for a couple of months now. They have rebuilt the fleet through a draconian Emergency War Order issued by Commodore Wintermist -- although her name was redacted from the document so that the enemy would not be able to confirm that an Imperial Princess was in the system.   Though currently comprised of elves too old to fight training young elves who have never seen battle and dirtsider volunteers, the cobbled-together reformed fleet has successfully held off an invasion from the Fomorian blockade. Further, they have successfully repelled an assault against the city of Zynmyrinar .   The Voidchasers have recently seized control of a number of orcish ships through exploiting their understanding of the enemy's cultural honour codes, and have suborned a number of goblins and are working to suborn more. Now, with the Draconian Fleet on the other side of the blockade, they are about to begin the push to repel the Fomorians from their system. 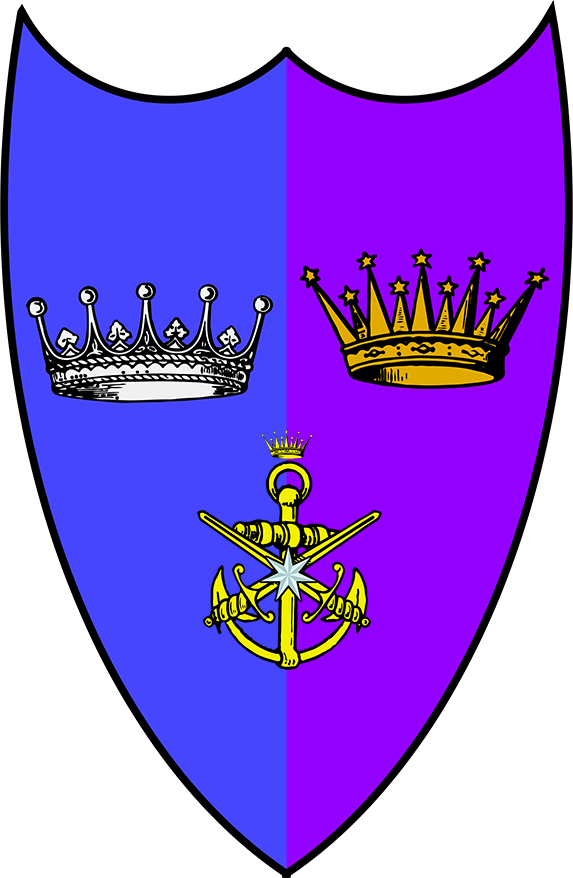 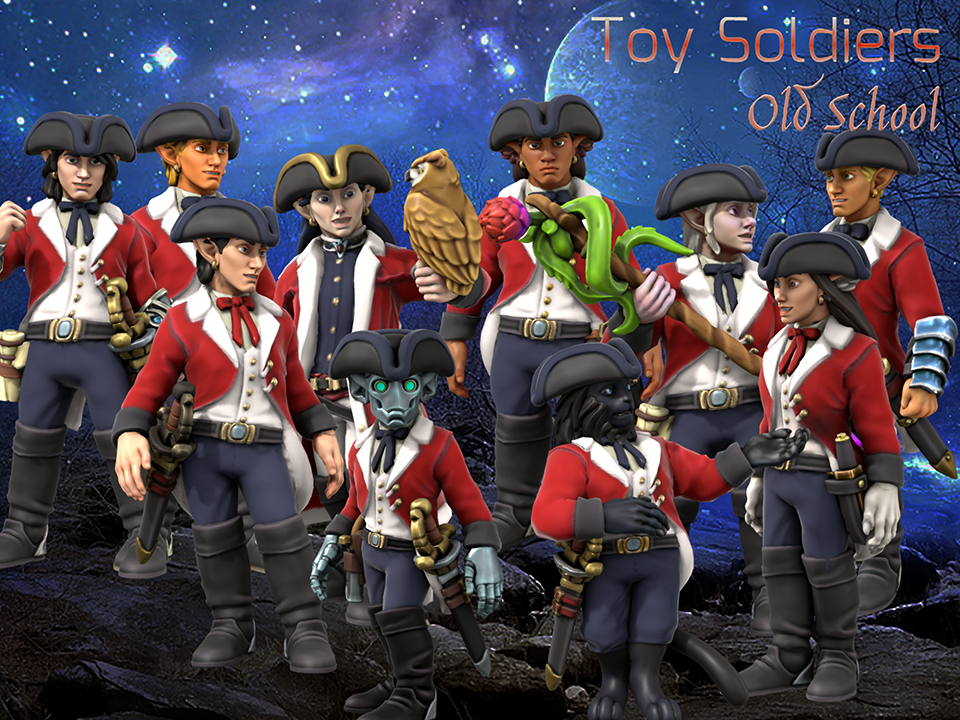 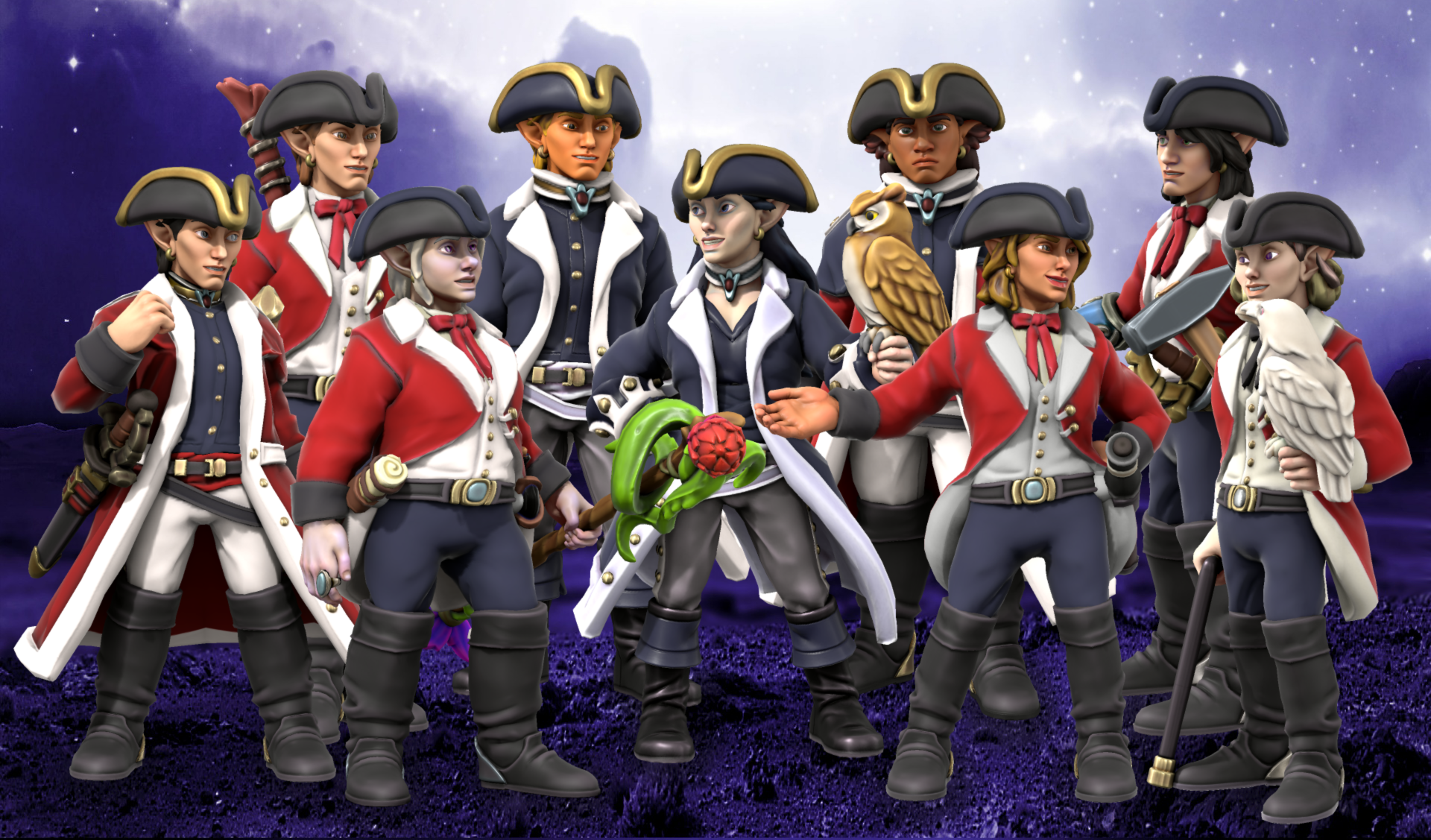 Voidchasers at the Outbreak of IW1 by HeroForge

The Commodore's Emergency War Order 001 was a military order dispatched by an unknown commodore who found themself in command of the Telasian Imperial Fleet after the opening salvos of the First Interstellar War.

Selene Sunfall (née Wintermist) is a highly-respected and much loved priestess of Arianrhod. Selene, however, has a complicated past; one with equal measures of fame and infamy.

The Peridotian Mutiny was an uprising that took place entirely within the ranks of the Avalonian Imperial Navy. Also sometimes referred to as the Naval Civil War, the conflict involved open fighting and a blockade, with Navy personnel on both sides.

The Voidchaser Dispatch is the name given to an intelligence report that effectively launched the First Interstellar War. The dispatch officially mobilized the Avalonian Imperial Fleet.

Answering: "a unit or squad who guards an important person"
Visit SableAradia's Competition Page Check all other answers to this prompt Competition Homepage

~ Thank you for your support! ~
If you couldn't tell by the elves, orcs, and magic flying sailing ships in space, this is a work of fiction. Any resemblance to people or locations, living or historical, is purely coincidental, with the exception of Alberdingk Onestone, who may actually be an alternate dimension's version of a famous scientist, only as a gnome.
The Toy Soldier Saga is copyright (c) 1995 by Diane Morrison. All rights reserved.
Article template
Military Formation
World
Toy Soldier Saga
campaigns
Toy Soldiers: Old School