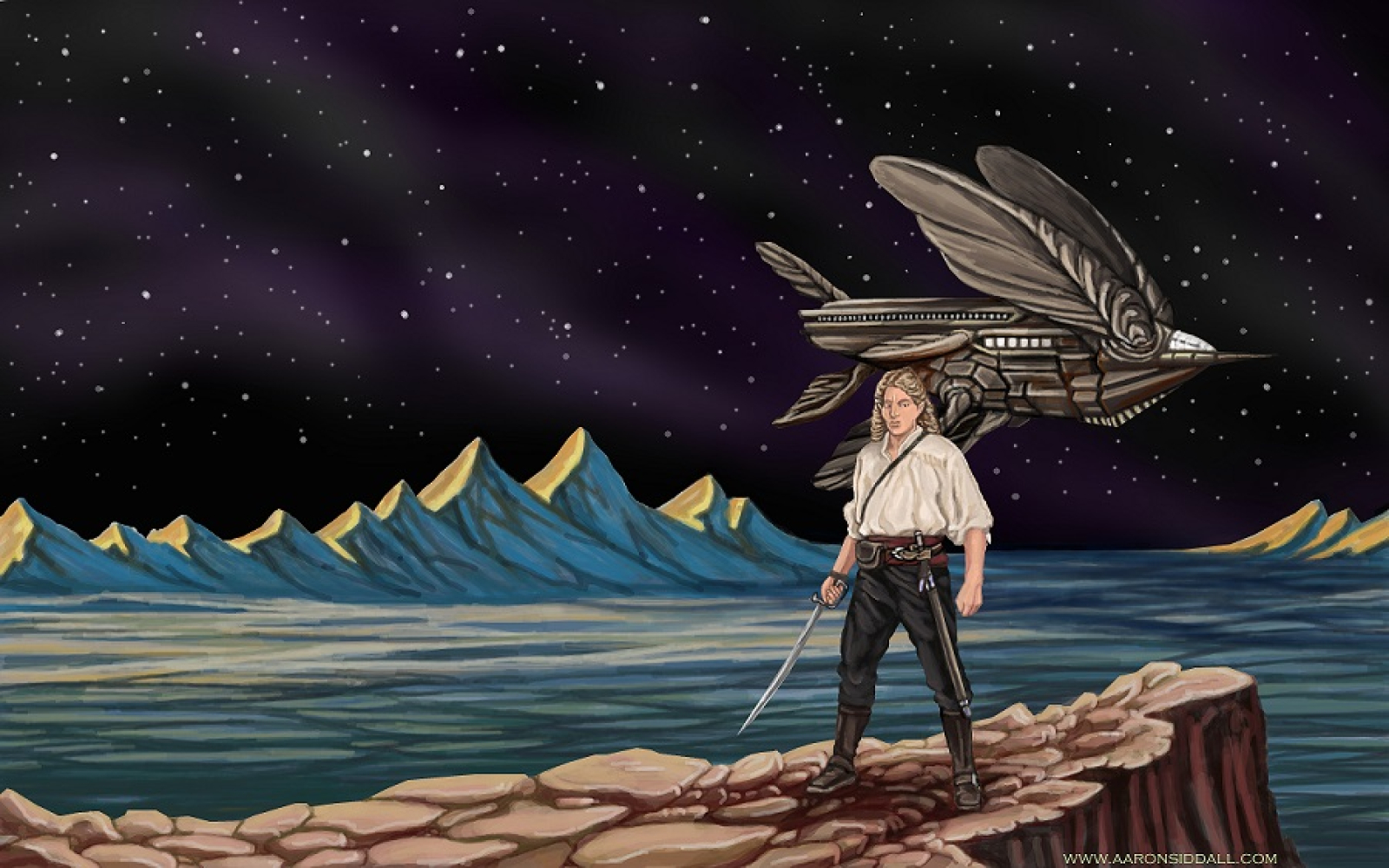 The Pride of the Telasian Fleet

The Arianrhod's Pride is a Tree-class (dreadnaught) Starseed ship in the Avalonian Imperial Navy's Telasian Fleet. She had a long and distinguished history of service within the Navy, spanning several conflicts, and both Interstellar Wars. Named for the elven goddess of the moon and stars, she was one of the first ships grown at the Skyreach Harbour Shipyard on Peridot, and is a seed of Yggdrasil's Sprout. She was among the earliest Tree-class ships in the Avalonian Naval fleet.

The Arianrhod's Pride was one of the first ships commissioned from the new Skyreach Shipyards on Peridot. She was somewhat of an experiment. Yggdrasil's Sprout was discovered relatively late by the elves of the Telasian System, and the Starseed that formed the Pride was well past the point of maturity at which it would have typically been harvested, being much larger than the Starseeds that form men-o-war. However, Post-Captain Zilthyr Starsong, a young mage, had an idea for a ship design that would serve as a cornerstone for ship defense. The design was so successful that it quickly touched off an arms race among the major factions of Known Space.   The first commander of the Arianrhod's Pride was Zilvaun Oathknight, a Post-Captain who had earned distinction in the Telgar Incident . He served an otherwise unremarkable career patrolling the Telasian System, and putting a stop to pirates, orcish raiders, and other ne'er-do-wells.   Command was assigned next to Deliana Wintermist, one of the rare Sidhe officers in the Avalonian Navy at the time. In part, this was a reward for her bravery in defending the Telasian System from Cthulans out of Wylinta during the Cthulan War, but in part, it was also because the Pride was, by then, considered somewhat obsolete, and therefore, not suited to the proud Alfar commanders of the system who might take offense to the appointment.   During Captain Wintermist's command, the Avalonian Imperial Marine Corps unit that would eventually be known as the Voidchasers served their early commissions as Midshipspeople and Ensigns or Marine Ensigns.   Captain Wintermist maintained her command through the First Interstellar War (IW1), and the Arianrhod's Pride saw more than a dozen battles. Ironically, Captain Starsong's vision held true, and the Pride performed more effectively during the war than any of her descendants. Fleet Admiral Zivalyn Elkshorn transferred his flag to the Arianrhod's Pride closer to the end of the war.   When Vice Admiral Wintermist retired from the Service, command passed to her son-in-law, Rear Admiral Lord Ruavel Sunfall.

Power is generated by drawing magical energy from the ship's Star-Pilot to feed the Pride's innate Starfaring Engine.

Like all Starseed ships, the Arianrhod's Pride is propelled by its innate Starfaring Engine in interaction with its Star-Pilot and sails crew.   Starfaring engines generate an Etheric Membrane and allow the Starseed, the Pilot, or both, to see and access the currents of the Airts that flow through Known Space.   The Arianrhod's Pride, like all dreadnaughts, is a three-masted warship. Enchanted sails take advantage of the Airt-currents, providing additional propulsion and steering.

The Arianrhod's Pride was one of the first Navy ships to carry a uniform main battery, rather than a few large weapons complimented by a heavy secondary armament of smaller weapons. In the First Interstellar War she was armed with space-adapted siege weaponry, including catapults and ballistae. In the Second Interstellar War her armaments were among the first to be upgraded to the new rail-guns.

The solid, oak-like husk of the Starseed serves as natural armour against the projectile weapons used in spacefaring combat. Its etheric membrane also grants a degree of protection by deflecting them around the field it creates. In addition, the etheric membrane provides shielding against radiation and space dust.

Like all Tree-class dreadnaughts, the Arianrhod's Pride carries one fighter-craft on each of the forward wings, and a pinnace (unarmed craft about the same size as a fighter) in her aft launch bay.

~ Thank you for your support! ~
If you couldn't tell by the elves, orcs, and magic flying sailing ships in space, this is a work of fiction. Any resemblance to people or locations, living or historical, is purely coincidental, with the exception of Alberdingk Onestone, who may actually be an alternate dimension's version of a famous scientist, only as a gnome.
The Toy Soldier Saga is copyright (c) 1995 by Diane Morrison. All rights reserved.
Cover image: A Few Good Elves by Aaron Siddall
This article has no secrets.
Article template
Vehicle
World
Toy Soldier Saga
Category
Avalonian Imperial Navy in Avalonian Empire
Author
SableAradia
Publication Date
3 Oct, 2021
Creation Date
12 Sep, 2021
Last Update Date
13 Jan, 2022
Visibility
Public
Views
259
Favorites
4
Comments
3
Work In Progress
Tags
Arianrhod&039;s Pride ships Avalonian Navy ships Ruavel Sunfall Deliana Wintermist

Nice article :D When you say that Zilthyr Starsong had a new design idea, you don't explicitly say what it is. Is it that the ship is bigger than previous ones, thus giving rise to the dreadnaught class? Or is the difference something else?

Nice work here. Really neat to read about this ship specifically, while also being reminded/learning about how ships work in your universe in general.

I like that you linked a bunch of articles to give more context to what was otherwise a pretty quick read. Nice quick article and nice ship!