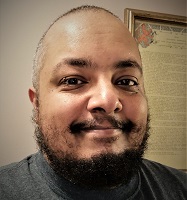 I'm a long time blerd, with a background in archaeology, professional diving, and GIS. I'm also a Dad, and veteran of overseas operations with the Canadian Army. Tabletop RPGs have been a big part of my life since the mid 90's, and I continue to be excited about them today. As a result, I made the jumps from end user to critic then to being a freelance writer, consultant, and indie game designer. I'm excited that I have a voice in the industry now, and plan to keep getting my ideas out there!

Scuba diving is the biggest one, I also enjoy range days and putting holes in paper, swimming, and a variety of other activities. I also low key keep my hand in archaeology and continue to be fascinated by Carthage.

Aliens, Cargo (2009), The Thing, Unlucky Stars, Supertoopers, Kelly's Heroes, Willow, Army of Darkness, Hard Target, Hard Boiled, Princess Bride, Dead Men Don't Wear Plaid, and pretty much every Mel Brooks film.   I also have a serious weakness for Hong Kong action movies from the 70's through the 90's. Not just the Jackie Chan or Sammo Hung ones. Like, all of the them. I love watching them!

Warehouse 13, Eureka, The Librarians, Kill Joys, What We Do in the Shadows, Columbo, Murder She Wrote, Star Trek: Lower Decks, Teen Titans Go!, Space: Above and Beyond, Tour of Duty, and a host of old cartoons from when I was a kid.   I'm also going to throw anime series in this one. I love Legend of the Galactic Heroes, Star Blazers: Space Battleship Yamato 2199 and 2202, Restaurant to Another World, Flying Witch, Fist of the Northstar, God of Highschool, the Macross series (except Macross 7, too weird), The Heroic Legend of Arslan, One Piece, and so many other series.

The Laundry Files series by Charles Stross, he Honor Harrington series by David Weber, the Hammer's Slammers series by David Drake, The Deed of Paksenarrion by Elizabeth Moon, Mighty Good Road by Elizabeth Scott, the Fifth Millenium series by S.M. Stirling et al., the Warhammer 40k novels (these are my trash, leave me be!), and a lot more. This is just off the top of my head.

I don't really have any favourite writers, in the sense that I don't immediately buy a book or check it out of the library if I see their name on it. I like a lot of authors, but don't have any faves.