WE DID IT! Thank you for supporting our Kickstarter for Book 1, A Few Good Elves!
Ebook, print & audiobook versions are coming soon. Release day: September 7 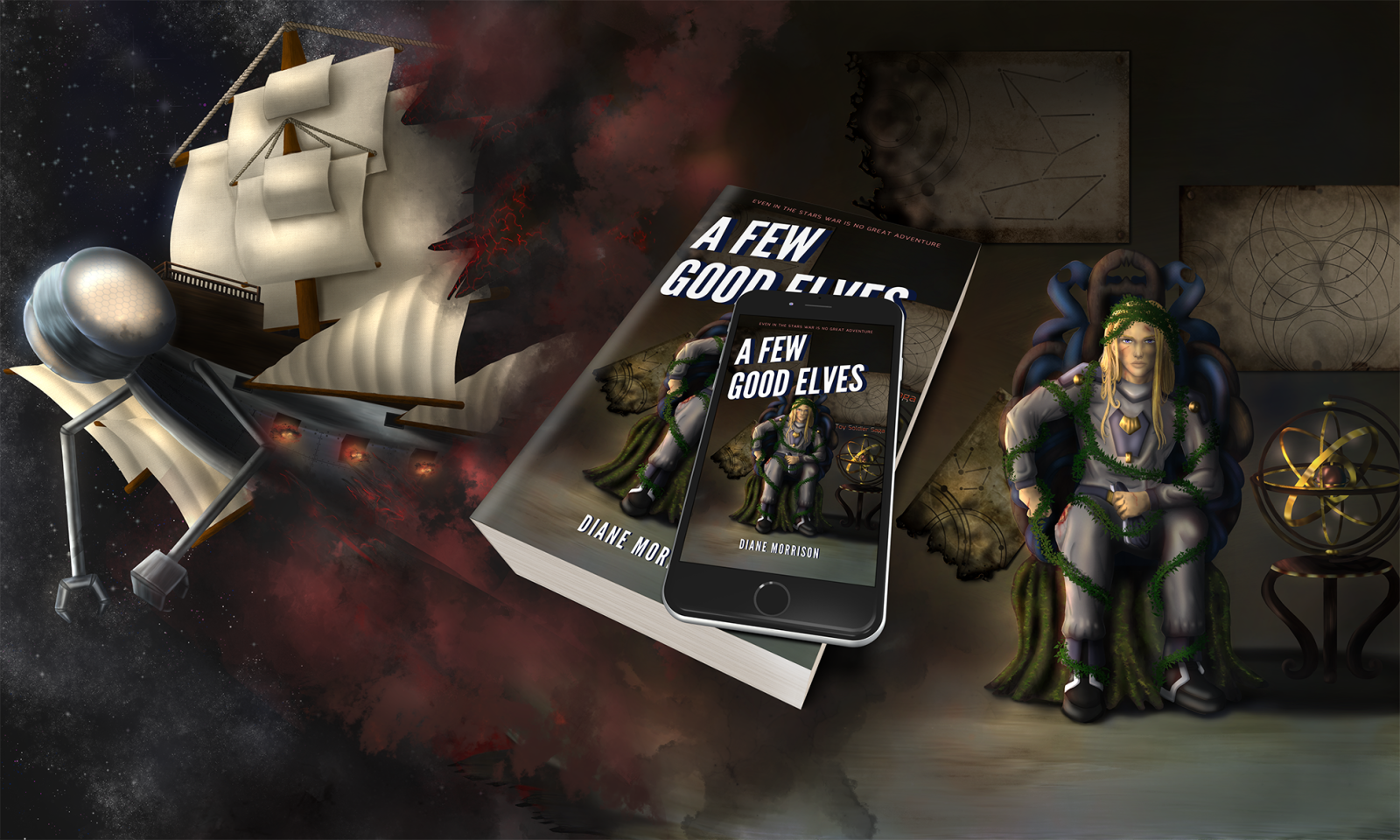 A Novel by Diane Morrison

Edited by Sarah Buhrman
As seen in A Few Good Elves

Thank you all! The Kickstarter is fully funded, and we made our first stretch goal too! Keep up-to-date with the latest on our Twitch channel through July and August!


TOY SOLDIER: A DEROGATORY SLANG TERM FOR AN ELVEN MARINE

Battles great and terrible, small and bitter, raged across Known Space as the wars of Elves and Orcs played out their legacy of hatred across the stars themselves. Epics would be written, songs would be sung; but wars are fought by real people with loves and families and homes.   All Shaundar Sunfall ever wanted to be was a Star-Pilot. Raised on his father's ship, he has found an affinity for the stars -- although as a mixed-race elf and a bit of troublemaker, he often runs afoul of his commanding officers.   Now the orcs have returned to once again wage war on their ancient enemies. The fate of his people is at stake. Although he is too young, Shaundar lies about his age to join up. But he is about to learn that no matter what the sagas say, war is no great adventure.   Part naval adventure, part high fantasy, part space opera, and part war novel, A Few Good Elves is like nothing you've ever read before -- and won't soon forget.

A Few Good Elves, book one of the Toy Soldier Saga, is a gunpowder fantasy/military space opera novel, which I have been serializing exclusively for my Patrons as I have finished editing each chapter, at a rate of about one chapter per week. You can check out the Flash-Forward and the first chapter by clicking on the link on the sidebar!   Now it's finally time to take it to print! Ebook, trade paperback, and hardback versions are on schedule for release Sept. 7, 2021. Audiobooks are also forthcoming: release date TBA.
Press Assets downloads, including cover images, product mockup and author headshot.


Praise for A Few Good Elves:

A Few Good Elves is one of the best SFF military stories I've ever read. The world is both logical and imaginative, with a heavy dose of just plain great characters and an adventure to match. There is no lack of humor, darkness, struggle and success in this tale which combines the high fantasy of Lord of the Rings with the naval drama of Master & Commander. The main character has struggles that build an elven culture which results in an epic world - just the right size for a war story that keeps you on the edge of your seat. This book is a great read. No matter what genre you favor, there is something for you to love.
— Sarah Buhrman, author of the Runespells series

~ Thank you for your support! ~
If you couldn't tell by the elves, orcs, and magic flying sailing ships in space, this is a work of fiction. Any resemblance to people or locations, living or historical, is purely coincidental, with the exception of Alberdingk Onestone, who may actually be an alternate dimension's version of a famous scientist, only as a gnome.
The Toy Soldier Saga is copyright (c) 1995 by Diane Morrison. All rights reserved.
Cover image: A Few Good Elves - Paperback and Ebook by Cayotica

I'm so excited for your kickstarter! I haven't had time to read the book yet on WA, but reading it on my kindle or as a proper book sounds amazing! <3

I missed the cover-art reveal, but now I get to see it! Really nice! Good luck on the Kickstarter!!