WE DID IT! Thank you for supporting our Kickstarter for Book 1, A Few Good Elves!
Preorder available now! Release day: September 7

Selnaris Khi'Marinae is one of the foremost experts in the development of spacefaring technologies, especially gnomish or goblinese creations -- despite his political asides. Political opinions are entirely his own.
The Gnomish Intrastellar Personal Transport Device was invented a long time ago, but was mostly seen as a curiosity (literally) before the First Interstellar War (IW1) . Though the Goblins stole the design early (they would argue the fact, but I was there, I know better), even most Fomorians seen little use for gallivanting about space in some armoured contraption.   However, in the years leading up to the Interstellar War, marines among the elves and gnomes made more common usage of the GIPTD (pronounced Gip-Ted), or more commonly "Bugsuit", as a means to assault and board "pirate" ships (mostly orcs and goblins), and take the ship without serious harm to the prize.   Before the Second Interstellar War (IW2), or the War of Vengeance as the Fomorians call it, Orc and Goblin sailors were most commonly seen working for "less than scrupulous" merchants, because no one else would hire them, due to the reputation they had shouldered on them from the elves. The elves soon had cause to label all ships carrying compliments of Fomorians as "pirate vessels," thus assuring that no one would hire them at all, unless they really were pirates, because what do pirates have to lose? So, naturally, many Orcs and other Fomorians did take up piracy, as that was their only means of sustenance in the unforgiving reaches of space.   So, by their bias, Elves created the Fomorian Pirate, and thus created a need for a means to capture said pirates, and thus the Gipted (GIPTD) was incorporated into the Avalonian Marine Corps, as an optional assignment (with double pay), assuming you could provide your own "Bugsuit".   A GIPTD appears to be a suit of Mithril Plate Armor with an integrated backpack, from which two to four large insectile "Wings" protrude. The backpack is actually the mechanical component of the bugsuit, and contains a miniature spindizzy that is just big enough to power the suit of armour. The wings are maneuvering sails, but also solar cells which power the suit, or supplement power for a Star-Pilot. Because of this "light-powered" integral design, even non-spellcasters can use a Bugsuit to fly.   GIPTD Stats for Pathfinder 1e

Most "Bugmen" are not spellcasters, or at least not major spellcasters, so they usually rely on the Bugsuit's internal power source, while saving their own magic (if any) for combat.   Before the First War, called the Desolation War by the Fomorians, Gnomish contraptions, and Goblin gizmos, were mostly seen in the hands of Gnomes and Goblins. Others perceived them as weird and alien devices, best superstitiously avoided.   However, that changed in the years leading up to the War, when The Majesty of Evergleam, an Avalonian Imperial Navy Ship-of-the-Line, came under ambush by two pirate sloops, and was rescued from being boarded by a Gnomish Destroyer called the Chica-bang. While the smaller destroyer concentrated on avoiding the larger Sloop-of-War, the Chica-bang's marines crossed space in their Bugsuits, and wreaked havoc on the pirates. The fear factor alone was enough to cow hardened brigands, not knowing exactly what the flying "Bugmen" were.   In his report, Captain Inellon Elderwind of the Majesty raved about the effectiveness of the Bugmen, and beseeched the Navy to acquire them for the Marine Corps. However, the Top Mithril balked at the price, noting the gnomes wanted more than the price of a full suit of Mithril Full Plate, for armour which would be considered light (mithril breastplate). So, at first, a compromise was reached where if marines could supply their own suits, the Navy would form a corps for them. The Navy envisioned an elite corps of young noble marines, since they'd have to supply the Bugsuit.   However, the Gnomes thought it odd to have to supply your own gear, so they cut a break to Elven marines in uniform. They currently offer the suits to uniformed Avalonian Marines at cost (roughly 6,000 Novas) and the Gnomes have countless ways to finance the suit.   When the Orcs figured out the usefulness of the bugsuits, they quickly adapted their tactics. Battles in the space between ships often began with marines on both sides in bugsuits. The Orcish Captains began supplying their marines, and this made the bugsuits more common, with both sides salvaging suits after battles to repurpose to new marines. Orcish captains, and later Commodores, in the Desolation War could often afford to keep a small compliment of bugsuits for specially trained crew, and would pay highly for a marine, even a goblin one, with his own suit.   The more egalitarian elves, on the other hand, would repurpose captured and salvaged bugsuits, and give them to marines as heirlooms that would forever make the marine's family responsible for the thing. It was sort of an "Enlisted Knighthood" (or in modern terms a "Special Forces" designation), and troops still received double normal pay. These "Bugmen" had their own assignments, orders, and berths away from other marines.   A strange brotherhood developed that crossed even racial lines, as first Elven Bugmen came to accept Gnomish ones and vice versa, and then Fomorian ones as "Honourable Foes," to which quarter should always be offered and accepted, with a bond of word more powerful than a faerie oath. And for their part, some Orcs came to accept Goblin Bugmen as almost equals and could probably be said to consider Hobgoblins and Kaxgoblins who became Bugmen to be equals. But the strange thing (to elves anyway) was that Fomorian Bugmen were as true to their word with Avalonian Bugmen as the latter were with the former.   After the First Interstellar War, the Desolation War, many Bugsuits went home with their now retired Marine Bugmen. In the years between the Wars, they became both disused and discarded; old family heirlooms passed to the children and grandchildren of the Bugmen as curiosities. By the time the Second Interstellar War (IW2) began, many Bugsuits had gone to Clan treasuries. They were dug out, and retrofitted for the initial attacks, a tactic that was almost forgotten among the Elves, which took them totally by surprise. However, the Elves were quick to train up Counter-Bugmen and call their veterans out of retirement to do the training.   Presently, Bugsuits remain what they were during the First War; specialized, expensive, and rare commodities, with those trained in their use being highly valued, and highly paid, by their respective militaries.

The Gnomish (Goblin) Intrastellar Personal Transport Device is a wonder of engineering. It consists of a mithril frame around a tiny, starmetal spindizzy. To power the spindizzy, a gizmo, called a Charge Cell, is attached to both the spindizzy and a number of "light reactive" membranes, that draw their power from the Airts created by bodies of light, like stars. The Charge Cell and Spindizzy are housed in a thin mithril or adamantite encasement from which the Solar Cells protrude. Also within the encasement is an extra-dimensional space filled with air. This space is created by a spindizzy powered engine that also filters the air. Savvy marines have filled part of this "Eddy" with easily accessible food, like enriched honey or the like and water. The eddy is big enough to hold a weeks worth of food and water and still hold enough air that the filtration system doesn't get overloaded in that time.

Calling these marines "Bugmen" is a bit of a misnomer, as female Elven marines are as common as male Elven marines, and among the Gnomes, a good 40% of these marines are women. With the Goblins, the number is more like 25% pretending to be male, and with the Orcs, the final number is about 10% when you consider that some groups, like the Clan Bloodaxe , would kill any woman they found on a ship (so about 1%). Others like the Clan Doomspear , have almost 50% female presence in all military fields, and still others, like the Bloodhaven Clan, are fairly egalitarian, but have strong traditions of male and female roles, so about 33% female presence in the marines.   Among the Elves, the term stuck because female bugmen found that the Orcs would fight them like men if they didn't know they were women. Among the orcs, there are few enough female Bugmen outside of the Doomspears that there never seemed a need for a separate term, but female Doomspear Bugmen have their armour "feminized" and enameled yellow and black. They refer to themselves as "The Wasps" -- and who are we to argue?   You might say that part of IW1 pivoted upon the use of Bugmen. If the Orcs had not proven infinitely adaptable when compared to the Elves, they very well might had been driven to extinction. As it was, they almost were. In the Retribution War, Bugman Shock Troops made up of Orug and Balorian Stormtroopers, were used to great effect in the Blitzkrieg Onslaught of the Fomorian Empire, but were soon countered by well trained, young, Elven Bugmen wearing their parents' or grandparents' Bugsuits. 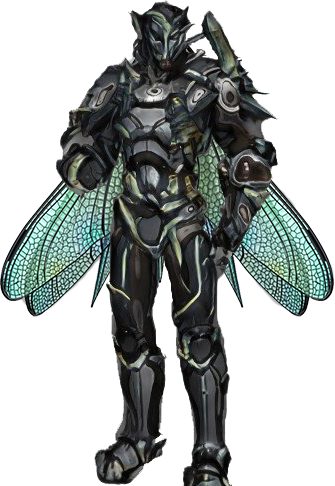 Bugsuit - Wings Contracted by Diane Morrison
Item type
Mechanical
Current Location
Known Space
Manufacturer
Whirlybird
Related Technologies
Rarity
Rare
Weight
25lbs/11.5kg
Dimensions
Sized for medium humanoids
Base Price
12,000 Novas (gp)
Raw materials & Components
Adamantite or mithril is required for the armour and encasement pack. Starmetal and Mithril are needed for the spindizzy. Leather is required for the straps, cotton for the padding, and alchemically treated iridescent cloth is needed for the Solar Cells, with mithril or adamantite for the frames. Starmetal is required for the Charge cell
Tools
To make a Bugsuit, the potential craftsgnome requires a full alchemy lab, a smithy with foundries and a dragon bellows, a jeweler's workshop, and a tailor's workshop. Needless to say, these devices are often the work of teams of craftsgnomes, rather than individuals.
Related Materials 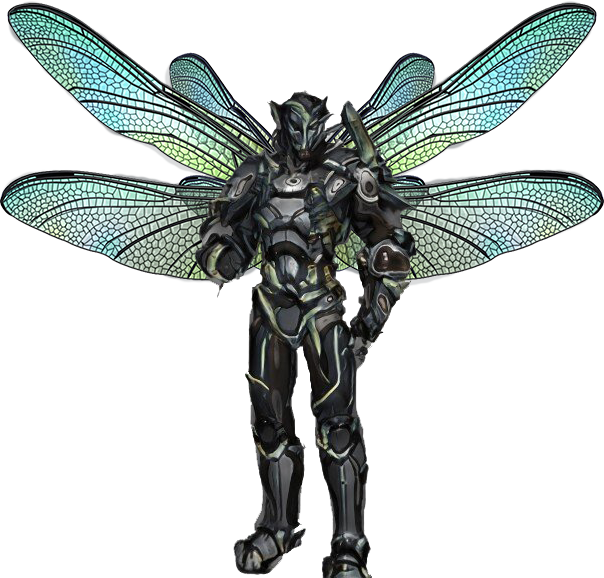 Mithril is a surprisingly lightweight, silver-blue metal that is essential to a variety of technologies, the most important of which is Starfaring Engines.

~ Thank you for your support! ~
If you couldn't tell by the elves, orcs, and magic flying sailing ships in space, this is a work of fiction. Any resemblance to people or locations, living or historical, is purely coincidental, with the exception of Alberdingk Onestone, who may actually be an alternate dimension's version of a famous scientist, only as a gnome.
The Toy Soldier Saga is copyright (c) 1995 by Diane Morrison. All rights reserved.
Cover image: Toy Soldier Saga Part 1 by Aaron Siddall
This article has no secrets.