The trade capital of the Borderlands.

Zobeck is a homebrewed version of a portion of the Lost Lands, which is (c) Frog God Games. The name Zobeck is from Kobold Press.
Being located at the intersection of the great north/south and east/west trade routes and the mouth of the Gaelon River has made Zobeck the trading capital of the Borderlands. This independent city-state boasts a well trained and highly disciplined guard that keeps the streets safe and hospitable for its many wealthy and influential visitors. Because of its steadfast neutrality, central location, and friendly port, Zobeck is where the wealthy come from every nation to broker deals and form alliances. Though the riverbed and surrounding countryside provide the citizens of Zobeck with ample food and resources, the city’s primary source of income is trade: every ship mooring in its harbor and every caravan passing through its gate must pay a small tax for the right to do business in this desirable location. Because it is the only city where merchants can buy or sell to other merchants from so many far off lands, the streets are always crowded with exotic travelers and businessmen looking to make their fortune.   There is no lack of adventure in Zobeck either, for where there is wealth there is always intrigue, and some merchants deal in more than just silks and herbs. The taverns are filled with shady characters looking for discreet men to carry out one plan or another. What’s more, adventurers returning with rare treasures are always able to find interested buyers in the city’s bazaar and trading district.

Technically, Zobeck is a Republic. The governmental body is made up of 50 senators and one governor. Every six years the senators vote to either allow the current governor to continue another term, or to replace him, in which case they elect one of their members to the governor’s seat. Governors are rarely unseated, however, since the governor gets to decide who fills senatorial seats when they come empty. Over the years, however, governors have been particularly inept or the senate particularly restless, and a “coup” as they are always referred, occurs. The cross-shaped building in the northeast of the district is the senate itself; the smaller buildings surrounding it house the hundreds of bureaucrats who process requests for permits and generally seek to maintain the smooth, money-making operation that is Zobeck. Because of the high concentration of both nobility and wealth (all collected taxes are brought here) an elite guard is permanently stationed in the Government District.

Critical to Zobeck's survival is its rigorous defense. The Senate is keenly aware of the strategic appeal of their city’s location, and although many nations benefit from Zobeck's neutrality, still others would love nothing more than to capture the city and reap its many treasures. Thus, Zobeck maintains a garrison of no less than 3,500 soldiers, which includes foot soldiers, archers, engineers, and a small cavalry. In times of war, this number can swell to as many as 6,000 with the conscription of farmers, merchants, dock workers, and, yes, even a few adventurers. What’s more, it is an unspoken understanding that the considerable fire power of the Wizard’s Academy, both of its students and its faculty, would be brought to bear if the city’s sovereignty was being threatened. The city’s garrison is kept busy with 24 hour patrols, consisting of four foot soldiers and one sergeant. The towers are manned at all times as well.

The mighty Gaelon River bisects Zobeck. In addition to the excellent port provided by the river’s mouth, the Gaelon is also a popular means of transportation, both upstream and down. Many merchants ship their cargo in large vessels to Endhome’s port then move them inland on wide barges, and inland merchants often ship their goods to Zobeck via the Gaelon as well. The three bridges spanning the Gaelon are all tall enough to accommodate most river-going vessels, and were built with parapets in case an invading force were to attempt to send forces up the Gaelon into the heart of the city.   Zobeck also boasts the most modern and efficient sewer system on the continent. However, a number creatures have made the sewers their home.

The buildings of Zobeck tend to be made of wood with peaked, thatched roofs, and shuttered windows. Some, however, especially those in the Wizard’s Academy, the Government District, and the Noble District, are made of stone. Within the city itself are four walled districts (the Wizard’s Academy, the Noble District, the Government District, and the Barracks). These walls are 15 feet-high and unmanned.   There are two main thoroughfares dividing Zobeck, both extensions of the exterior roads to which they are connected. The east/west road, which begins at the west gate, is called the King’s Road, as is its exterior parent. The north/south road is called Wayfarer’s Way. Both roads are wide and well kept and are the primary routes employed by merchants when bringing their goods to the Trading District. There are also many smaller roads connecting the King’s Road and Wayfarer’s Way with the important districts in the city. Beyond this, there are hundreds of alleys and side streets winding their way between the crowded buildings surrounding the main concourses. 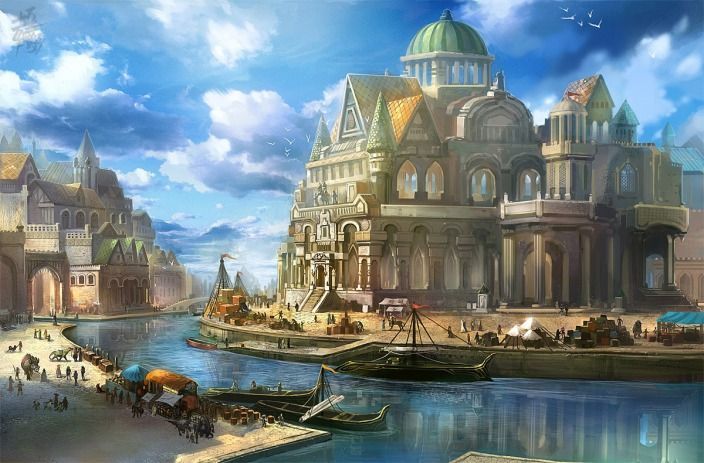 Gaelon River Valley
All copyrights belong to the original creators of the works both artistic and written featured herein. Credits given where possible.  Original works are copyright Michael Plowden.