A quaint town to the southeast of Winterhaven. Aubrey is a highly religious place. While the town itself is fairly peaceful, for many years it has had a problem with vampires. They have been attacked on many occasions and Angus White has been training clerics within the town for decades. Alexandra Holden has taken upon herself to to become the town’s protector. You can find her very often stalking the outskirts of the town and looking for any undead that would do the town harm. The most notable merchant in town would be Artimus Peck, a gnome with a reputation for carrying “the most reliable vampire fighting equipment in the west”.

Show spoiler
Arc 1
Aubrey was visited by Group 1 as they crossed the continent to build an army. Father White offered the towns clerics if the group helped with the local vampire problem, which they did, with some effort. Father White made good on his promise and sent clerics to aid with the war.   The town's problems were not over as they were besieged frequently by vampires. Group 2, Group 3 and Group 4 would all pass through town and fight vampires to help the town but Group 2 seemed to end the scourge by helping several vampires integrate into the town.   Arc 2


Many refugees from Donhurst made their way to Aubrey. Some stayed and some moved on to Winterhaven and Durnhollow.

When Maddy and her group came to town, they discovered that Father White was ill and near death and through some possible divine intervention, learned that he had been poisoned and could be cured.

Angus White and the leaders of the Temple of Amaunator help guide the town.

The town of Aubrey has had a long running issue with nearby vampires, but wolves and other natural predators lurk outside of town. 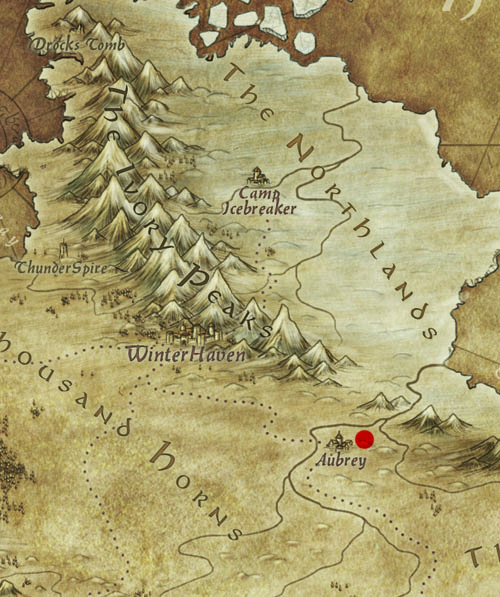