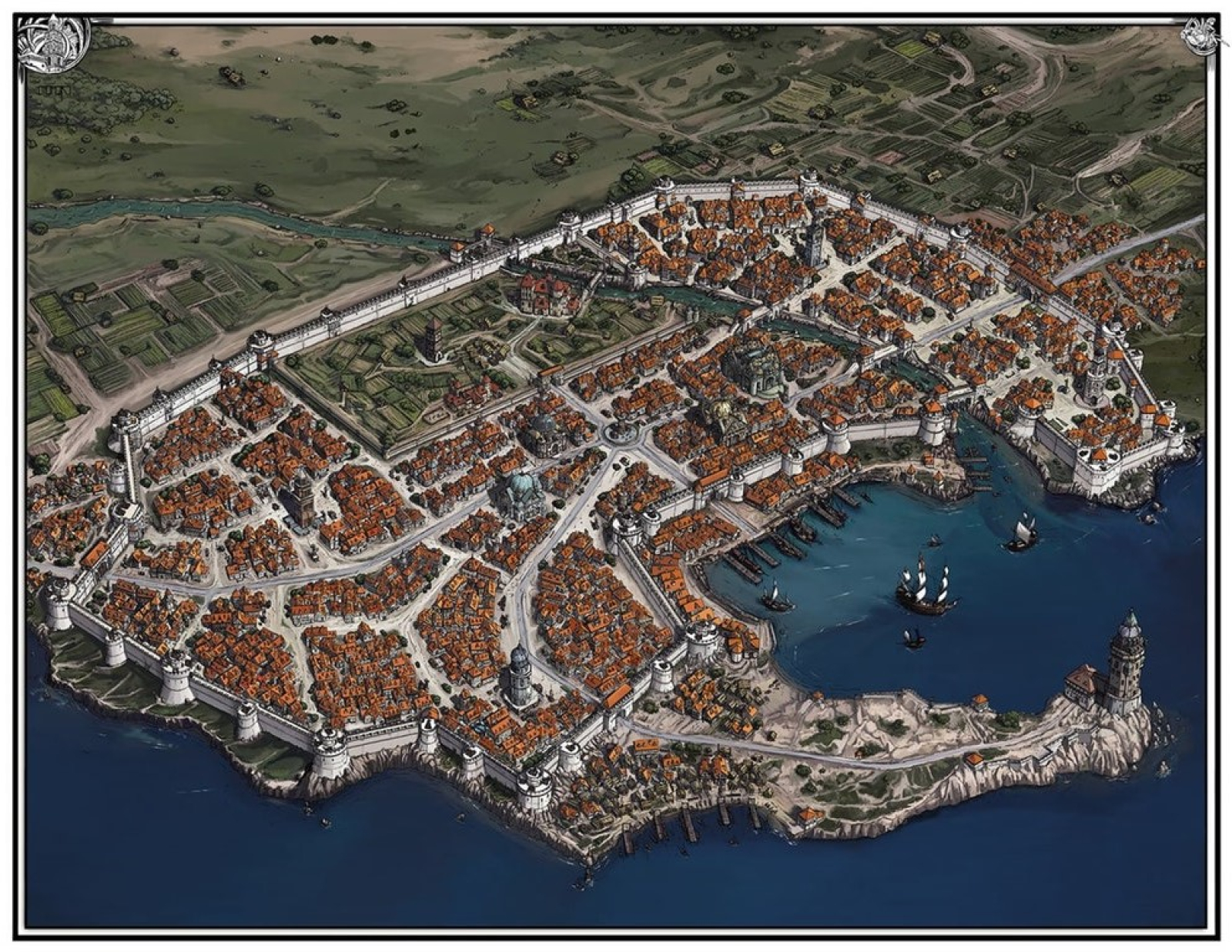 The Free City of Southton is full of contradictions; it is both a brave frontier town and a city brimming with tradition. It's a center for culture and military strength, but exists also on a precarious balance between the unknown on one side and 'The Old World' on the other. Large and powerful enough to be considered a proper City-State, Southton proudly answers to no one, an attitude that is generally agreed to be shared amongst its populace.

The vast majority of inhabitants are Human, with a large minority of Half-Orcs. Dwarves, who enjoy the relatively slow pace of cultural change of Southton humans, make up the next largest demographic. Aragonians, Zamberians, and Elves round out the smallest of the important minorities.   A few ethnicities and races are almost unheard of in Southton. Tielfings, Aasimar, Genasi, and any other 'plane-touched' or exotic non-native race are actively dissuaded from making Southton their home, often by violence or the threat of it.

Southton is an independent City-State, not under the rule or influence of the city of Terra. For the last several hundred years, Southton has enjoyed freedom from the explicit political and cultural influence of Terra. Since winning the Sovereign War, Southton no longer recognizes the King in Terra, but instead makes its own laws, treaties and relationships with the other civilizations of the known world.   The Lord-Mayor is the top of the political structure, but any allusions to monarchy or being 'royalty' are quickly, and vocally, quashed. The Lord-Mayor is an elected position, but there are no term limits. From there, in the interest of 'small government' and the freedoms of its individual citizens, the Guilds and their Masters provide the institutions and infrastructure that keep the City running. The Guilds tend to be more concerned with outmaneuvering the other Guilds and manipulating the Lord-Mayor than providing the best possible service to the populace. However, the interactions between the Guildmasters and the Lord-Mayor vary from conspiratorially close, to outright antagonism, depending on the current political climate and personalities involved.   The City-State has no official standing army, but their armed forces, called 'The Militia', fill that niche and answer solely to the Lord-Mayor, who is also considered to the Grand-General of the Militia. All male citizens are expected to join The Militia during their 16th Summer for a 2 year service. Basic training in weapons, armor, and soldiering are taught as well as other non-military vocational apprenticeships, based on the interests and talents of the cadets. Unsurprisingly, wealthy or connected boys often have abbreviated or completed circumvented stints in the Militia, despite it being considered a standard rite of passage into manhood for Southtonites.

Southton is a well defended, walled city with a large, if less regimented, standing military force. Existing so close to the Waterflux Marsh, with is innumerable Goblinoid tribes and monster lairs, has tempered the City into a bulwark against raids and attacks. Ballista and cannons top the sturdy stone towers, the parapets are constantly patrolled by skilled archers and riflemen, and the streets are thick with Militia and Town Guards. The gates to the city are generally a hassle to move through, due to the zealousness of the Guards who question and inspect each and every cart, wagon, and person for contraband, hints of aberrant or extra-planar influence, or disruptive intent.   The War Wizard College is one of the finest magical schools in the known world and it specializes in Evocation, Abjuration, and the mixing of mundane martial prowess with magical power. The low, rumbling sounds of magical explosions from the test yards inside the college are a common sound in Southton, which new visitors tend to jump at in shock, but longtime residence have learned to completely ignore and tune-out.   Free from the restrictions of Terra, Southton has made their own trade treaties with Aragon, which has flooded the city with firearms in the last 100 years. Southton natives have taken to calling the Aragonian rifles 'muskets', which has lead to the formation of an elite group of Militia members called the Musketeers. Equally deadly with rifle, pistol and sword, they tend to swagger around town when not on daring missions for the Lord-Mayor, or when it strikes their fancy, for a Guildmaster.   Southton's Navy, while not as expansive as Seavale's, is sturdier and more focused on defense, as oppose to trade. The vast majority of Southton's Navy stays within sight of Terra Main, defending shipping lanes and the city itself. The SeaFang pirates are their most common concern and a generation of cat-and-mouse between the Sovereign Fleet and the pirates has led to an arms race of tactics, keeping both sharp and battle-ready.   Southton has never fallen completely to a foreign invader, a fact most citizens will smugly remind you of.

Like many of the major cities of Terra Main, fishing is a major source of food and trade, along with mining, manufacturing, and mercenaries. Mining operations to the west, in the Skytouch Mountains, are extremely lucrative, producing massive quantities of gold, silver, platinum, iron, and gemstones. There is some contention between the Dwarves of SkyHarbor, but a strong and generous trade agreement between the city-states keeps most conflict small and behind the scenes.   Southton steel (weapons and armor) is known for it's consistency and high quality, if not for its rather old-fashioned look and styling. These items are dependable and rugged but are rarely intricate or finely detailed for aesthetic purposes. Southton leather is some of the best in the known world, as they have perfect several alchemical treatments which increases it's durability and flexibility.   Lumber is also a major resources, as the lush lands between the Skytouch Mountains and the Waterflux March are dense with both hardwoods and conifers. Logging is dangerous work and the lumberjacks that work so far from the safety of the city walls are regarded as being exceptionally brave.   Southton tends to import firearms and gunpowder from Aragon, from across the Flowing Sea and otherwise unattainable luxury items from SkyHarbor high in the mountains to the West. Other than this, Southton is quite self-sufficient.

Southton is the home city of the Crimson Guard.   The Guilds in Southton are far more formalized and embedded into the political and governmental infrastructure than other cities on Terra. The sytem stops short of being an Oligarchy, and the number of Guilds tends to prevent monopolies, so a precarious (and often hard-fought) balance is maintained. The Guilds are, of course, interlinked on many axes, and they must often work together (or hash out their differences), where their portfolios overlap.

Founded after the New Genesis by a tribe of rugged Humans, Southton began its existence as a tiny fishing village. According to lore, the village was raided and razed multiple times by Goblinoids during the First Epoch. Eventually the people bound together, built primitive defenses like wooden palisades, ditches, and defended their chosen home. After a decisive victory, the Goblinoids were driven back, giving the village time to grow and reinforce. Since the turn of the Second Epoch, Southton has grown into a true City, and the walls have been expanded several times to accommodate this growth.   In 1426 NG, the Mindflayer Invasion occurred, followed immediately by the growth of the Darkness. Due to its distance from Terra, and being shielded by the Skytouch Mountains, Southton was less affected by the Darkness than Terra, Seavale, and most of the other settlements on the continent at the time. After the Battle of Terra in 1434 NG, Southton recovered quickly, giving it a massive head start on reconstruction and ingratiating it to all of the other cities that received its aid, especially the ravaged SkyHarbor.   By the 1700's NG, tensions between Terra and Southton had hit a boiling point. People still considered Terra the capital of Terra Main, despite its desolation during the Invasion and having to be rebuilt by an Alliance of Races, which depended heavily on Southton's resources. King Fayle, enthroned in Terra, had begun to act as though Southton was merely an extension of Terra, and demanded more resources, without commiserate compensation (according to the Southies). Fish, wheat, lumber and even metals where flooding out of Southton and into Terra, to deal with its explosive population growth at the time.   Terra, for its part, needed the resources, so it largely ignored Southton's treatment of the Goblinoid tribes in the area. By this point in history, Southton had pretty much tamed the surrounding areas and was conducting systematic and brutal raids on all Goblinoid villages and settlements, all the way north to the coast of the Pale Sea. Terrans felt that Southton was no longer defending itself, but sought to intentionally annihilate all other sentient beings east of Skytouch. Terra, having only known relative peace with the forest-dwelling Orc tribes to its north, could not understand or condone such genocidal violence.   In 1748 NG, A small Terran army moved in the City-State, ostensibly to observe and police the attacks upon the Goblinoids. Southton saw this approaching army and thought it an invasion for resources, as they had increasingly refused to hand over their production in the last several years. The Militia met the Terrans on the field of battle, and due to several misunderstandings and blinded by grudges, the forces charged one another. The Militia, through several masterful tactical maneuvers, routed them and forced a retreat in less than a day. Terrans saw this as an unprovoked attack by a rebel insurrection and mobilized the largest army in the known world since the Battle of Terra.   The Sovereign War lasted around a year and left thousands dead. At the end of it, the 'Treaty of Southton's Sovereignty' was signed by King Fayle, and an entirely new dynamic formed between the powers. Trade and culture between them was now highly regulated and codified, leading to shortages on both sides. These hardships were worn as a badge of honor by the citizens of Southton and as frustrating inconveniences caused by arrogant villagers by the people of Terra.   Time has smoothed over these wounds into old scars, and the two regions enjoy a more equal footing with one another today. Some older Dwarves still recall the battles of their youth and side with either Terra or Southton, but most Humans consider it ancient history, while at the same time still holding the stereotype of Terrans being spoiled, weak, and entitled.   In 1901 NG, Southton is a force to be reckoned with, easily on same tier as Seavale, Terra, or Aragos. The people are proud, traditional, and still hold the lessons of the past close their hearts, though some would call these grudges. That said, Orcish influence has started to appear in the city, as a cultural backlash against the bloody speciesism of the past has begun to turn into an embrace of acceptance of their green-skinned neighbors. Half-Orcs walk the streets without fear and have even begun to appear in positions of (minor) power throughout the political structure. Pro-Orc sentiment is at an all-time high, especially contrasted against the violent loathing most citizens still feel for anything not native to NewGen, such as Tieflings or Genasi. "At least the Orcs are supposed to be here. They're NewGenian.", the claim posits.