Far below Skyharbor, entombed under the SkyTouch mountains, an ancient Dwarven frontier city awaits, cold and dusty. Once a bustling center of trade between the surface, the Underdark, and the subterranean river known as the Marduhk Kuhn.

Founded early in the First Epoch, around 300 NG, Deepgate was carved from the roots of SkyTouch mountain, soon after Dwarven delvers discovered the conical cavern. For several generations, the Dwarves dug, carved, and excavated the natural cavern, following the cracks and rivulets of water until they reached sea level... and the Marduhk Kuhn.   Having reached the lowest reasonable point for building around 950 NG, the Dwarves then began to construct the city itself. Planned well in advanced by master architects and city planners, the city would be surrounded by wide canals, divided into quarters, and have room for residential expansion in the surrounding walls of stone.   To ease travel between Deepgate and the Dwarven capital directly above it, the Great Lift was constructed around 1050 NG. This hydrodynamically powered elevator system was a wonder of Dwarven engineering, and its rhythmic thrumming was a comforting sensation felt within the chest's of Deepgate's inhabitants.     In 1426 NG, the Illithid Invasion, Deepgate was one of the first cities to fall, even before Terra. A Mind Flayer Nautiloid vessel appeared within a nearby cavern, allowing its brain-eating crew to pour through the city without being threatened by sunlight. The city was completely overrun within a day, its citizens dead or made into chattel. In one last, desperate, and selfless act, the Great Lift was sabotaged, preventing the Mind Flayers from using it to reach the bustling city above, given the Dwarves time to evacuate. This action is often cited as the difference between the Dwarves of New Genesis being endangered as they are today... and extinct.   After the Battle of Terra, in 1434 NG, the Mind Flayers were driven back and the vast majority of the creatures returned to the Astral Plane. Deepgate, however, was a last bastion and suited them well. When they eventually did rejoin their brethren, they left behind monstrosities... squamous entities that were the results of their otherworldly experimentation on the flora and fauna of New Genesis. Grell, Intellect Devourers, and various subspecies of Beholders now wandered the cold and silent streets of Deepgate, as they would for the next 500 years.   In 1901 NG, a group of adventurers stumbled upon the forgotten settlement, entering it from the northern reaches of the Marduhk Kuhn. Methodically exploring the dead and shadowy street, they dispatched a few of the remaining creatures and managed to get the Great Lift working again, much the shock of the Dwarves in SkyHarbor far above. In the months after the reactivation of the Great Lift, the Dwarves has sent soldiers and specialists to retake the city. Deepgate may yet again be a center of trade and a thriving frontier town. 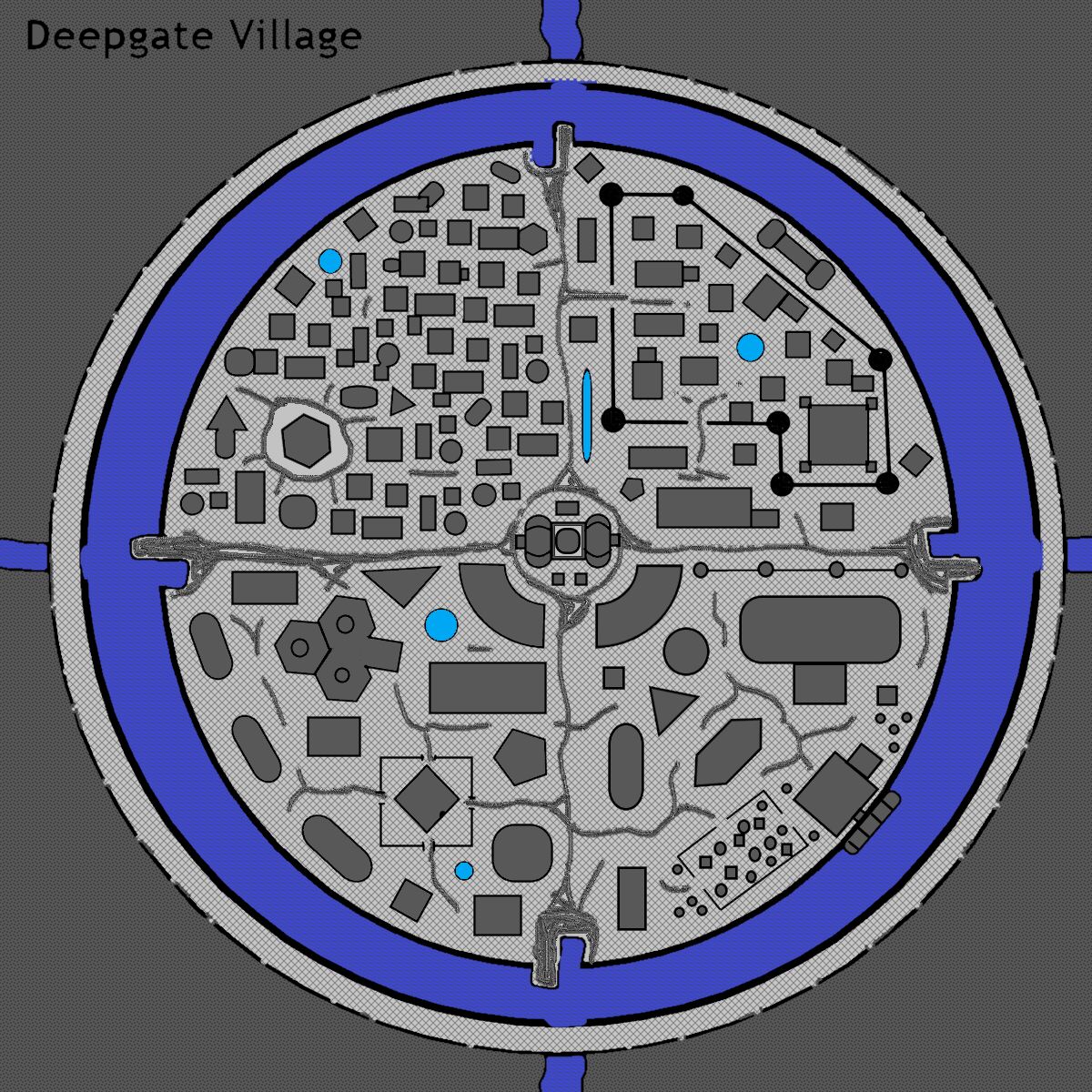 A map of Deepgate found in the town archives.