The largest, most cosmopolitan city on the continent, Terra is the seat of power, politically, magically and economically. It is known for alabaster white walls, blood-red roofs, soaring towers, impossible sky bridges ending in floating turrets.   Terra, the City of the Crescent Lake, is the home of Humankind, the nexus of culture and magic in the known world, and the center of the greatest catastrophe to ever befall the planet.

Terra, as the largest, most cosmopolitan city in the known world, has larger populations of most Races of any place outside of the respective homelands. Elves, Dwarves, Zamberians, and Aragonians have their own neighborhoods, each heavily influenced by their respective cultures. Golden Gnomes are few and far between, but not unheard. Half-orcs are relatively common, but tend to be a quiet, unseen minority. Tieflings, Aasimar, Genasi, and other exotic races are scattered throughout the city, but tend to keep a low profile, with a few exceptions.

Technically, the City-State of Terra is ruled by the King (currently King Fayle the XIII), but the Council of Five Races holds the true political power. The Council was formed after the Battle of Terra and oversaw the reconstruction of the city, and the world. Since then, the Council's power has only grown. by 1901 NG, the Council makes, ratifies and empowers laws, treaties, military actions, and policies. The King is largely a figurehead, but holds a great deal of cultural sway, and his opinion and public statements can force the Council to rethink an unpopular policy.

Protected by high, magically-enhanced walls, a lake that covers the entire south-eastern half of the city, a massive central citadel, four soaring towers with impossible sky bridges, floating turret towers that loom over the entire city, and a large standing defense force, Terra has vowed to never again be taken by a foreign power. With the support of the various Guilds and institutions of the city, including the Mages College, the Adventurer's Guild, the countless churches, and even the shadowy Thieves Guild, Terra is protected not only by its physical infrastructure, but by the large number of extraordinary people that call the city home.   Any invading force would have to overcome not only Terra's unparalleled physical defenses, its magical defenses, its standing army, city guard, but also its dozens, if not hundreds, of professional Adventurers.

Terra does brisk trade with the other cities of the world, with goods flowing constantly between Seavale, Terra, and Southton. Airships, sea-faring ships, and merchant caravans ply the skies, waters, and roads with almost all of the settlements of Terra Main, Downspin Continent and even the Drak Isles. Of course, smuggling and illicit goods are also moved in and out of the city, despite the Council's best efforts to put an end to such activities.   The main exports of Terra include art objects, gems, magical items, weapons, food, lumber, ales, and various luxury goods. Terra tends to import onyx, adamantine, mithral, and other exotic materials than cannot be sourced locally. Elven living crystal and mithral, Dwarven adamantine and stonework, Aragonian firearms, onyx, and darksteel and Zamberian apocrypha all flow into the city for consumption by it's populace.   A less material export from Terra would be that of educated, trained individuals; especially Adventurers. Between the various Arcane and Divine colleges, the Adventurer's Guild, and the long tradition of monster-hunters, dungeon-delvers, and truth-seekers, Terra produces more Adventurers than anywhere else in the known world.

The city of Terra has all of the amenities and infrastructure available to the world of New Genesis. Magic enhances most of the infrastructure that makes this a civilized and modern city, with streetlamps lit by arcane fire, architecture supported by permanent Walls of Force, food and water purified by Clerics, and an entire Guild of Artificers keeping the whole machine running.

Terra likely has the highest number of magical items, weapons, and armor in the known world. Between the venerable Mages College, the Artificer's Guild, and the Adventurer's Guild, the city is awash in magic items. Nearly anything can be bought or bartered for, but the vast majority cannot, or will not, pay the desired price for an enchanted object. If one has the inking and the resources, new magical items can be crafted here, as well. Even illegal, immoral, or banned items, generally of an Evil nature, can be procured through the Thieves Guild.   Second only to the ancient libraries of Zamber, knowledge is another specialty of Terra. Forgotten lore, historical minutia, and answers to cosmic secrets can all be sought after, or even stumbled upon, in the diverse libraries and book collections throughout the city.

The history of Terra is the history of New Genesis. Considered to be the first Human settlement after the New Genesis, Terra sheltered the fledgling race in a fertile valley, ringed with mountain, fed them with fertile fields and plenty of game, and quenched their thirst with fresh water rivers and the Crescent Lake, since around 0 NG. This fortuitous circumstance (divine plan?) allowed the Humans to establish themselves before encountering the Orc and Goblinoid tribes to the north and the countless monsters that roamed the countryside unchecked.   By 500 NG, Terra was the largest settlement on New Genesis, albeit almost entirely populated by Humans. The first castle that would become the Citadel loomed over the village, which was itself surrounded by palisade walls. The era between 500-1000 NG is often called the "Goblin Wars" or the "Orcish Wars" by Terran historians, as the green-skinned humanoids constantly raided and battled in the Terran Valley for control over the land. It was a dark, medieval time and life could be short and brutal.   By around 1000 NG, the Humans of Terra had conquered their lands from the Orcs, pushing them back to the surrounding lands, most notably the Vastwood to the north. Relations with the 'demi-human' races, such as the Elves and Dwarves had also settled into a peaceful paradigm, with Aragonians and Zamberians being mysterious and rare, but not unheard of. In this time, Moloth and his band of adventurers defeated the Warlock Lord and disassembled the Empire, an evil Artifact of cosmic power, and hid it's Shards all over the world.   In 1426 NG, the Invasion of Terra occurred. An army of Mind Flayers (Illithids) from beyond the stars descended from the skies in their nautiloid ships full of mind-controlled thralls, and sacked the city in a matter of hours. The leadership had their brains devoured, but not before every memory, every thought had been absorbed by the monsters. With the Mind Flayers in absolute control, thus began the Darkness, a zone of otherworldly shadow that slowly grew to engulf the entire continent and nearly the world.   The city was turned into a carnal house, its streets and building twisted into the alien and horrific designs that most pleased the Mind Flayers as every living thing was subjugated and either turned into more Mind Flayers or kept for chattel, slave labor, or food.   In 1434 NG, the Army of New Genesis made its way into the city, slayed the Mind Flayer leaders, destroyed the Darkness, and freed the city... and the world. With the Darkness fading away, the destruction of the city become painfully apparent. The city itself was nearly razed to the ground, with the remaining buildings made out of an alien substance that seemed to decay in direct sunlight. The Council of the Five Races convened and began reconstruction efforts, making Terra a symbol of the unity and power the people of New Genesis possessed. The Reconstruction would take decades, and many of the projects built then are still standing in 1901 NG.   In 1748 NG, the city of Southton fought for, and won, its independence from Terra in the Sovereign War. The years have scarred over the old, bitter wounds of that conflict, but both cultures have not forgotten their differences.   Today, in 1901 NG, Terra has a slightly diminished role from its clear superiority over the rest of the known world. Seavale and Southton have both grown into massive, important cities in their own right and the advent of airships has made location less of a determining factor in political and economic power. Diminished does not mean lacking, however. By most accounts Terra is still the largest and most powerful city in the known world; simply, the gap between it and its competitors is the smallest it has ever been. Terra will always be special, as it is the home of the soul of New Genesis, a symbol of what makes it and its people great. The fire to do what it right at any personal cost, the insatiable thirst for knowledge and truth, and the desire to right wrongs the world over and protect others bubbles up like a spring in the hearts of its populace, pouring into the world as intrepid Adventurers.

Terra's signature style is defined by its gleaming white walls, blood-red tower roofs, and impossible sky-arches that stretch over the city. The central Citadel, the 4 Towers, the sky bridges and the turret towers at the tip of each sky bridge all share this style.   The city is, however, cosmopolitan, with a large and diverse population, which in turn defines its many, culturally distinct, neighborhoods. The old Towne is largely painted in earth tones, browns, and warms reds, with bare wood and a decidedly old-fashioned look. This is to preserve its heritage and make it distinct from newer parts of the city.   The Holy Quarter follows a lighter, more transcendent color scheme, with yellows, gold, and silver highlights.   The Mage Quarter (also called the Magic Quarter), is styled with light blues and light purples, which most associate the color of magic being drawn from Onyx.   Zambertown, favors rich purples and bold reds, colors of royalty among the Dragon people.   The Aragonian District (sometimes called Steam Town or Brass Town), is dark, due both to the natural soot in and steam int he air, but also the rather uncreative way Aragonians tend to adorn their buildings.   The Dwarven District favors bold reds and greys, matching the bricks and clayworks located there.   The Elven Quarter is heavily influenced by classical Elven ascetics , with integrated flora, elegant, silvery designs, and small motes of magical, colored light to set the mood.   The Slums, the Shacks, and the Low Quarter have no unified design, besides shoddy and 'doing the best they can'.   The High Quarter favors stately rowhouses, with cast iron fencing, narrow, tall windows, and grey cobblestone streets.   The Bazaar and Caravans are in a constant state of flux, with vendors changing their signage, and stall configurations on a daily basis to appeal to potential customers.

Terra is centered around a large, rocky hill in the center of a crescent shaped lake, which is in turn is in a bowl-shaped valley surrounded by mountains. This natural geography is easily defensible, fertile, and well-watered. Forests ring the valley and creep up into the mountains.

The surrounding valley is rich and covered with farms that usually produce a surplus of food, with nearby forests providing ample lumber. The nearby ring of mountains are a steady source of precious and industrial metals, even producing small amounts of onyx, mithral and adamantine. 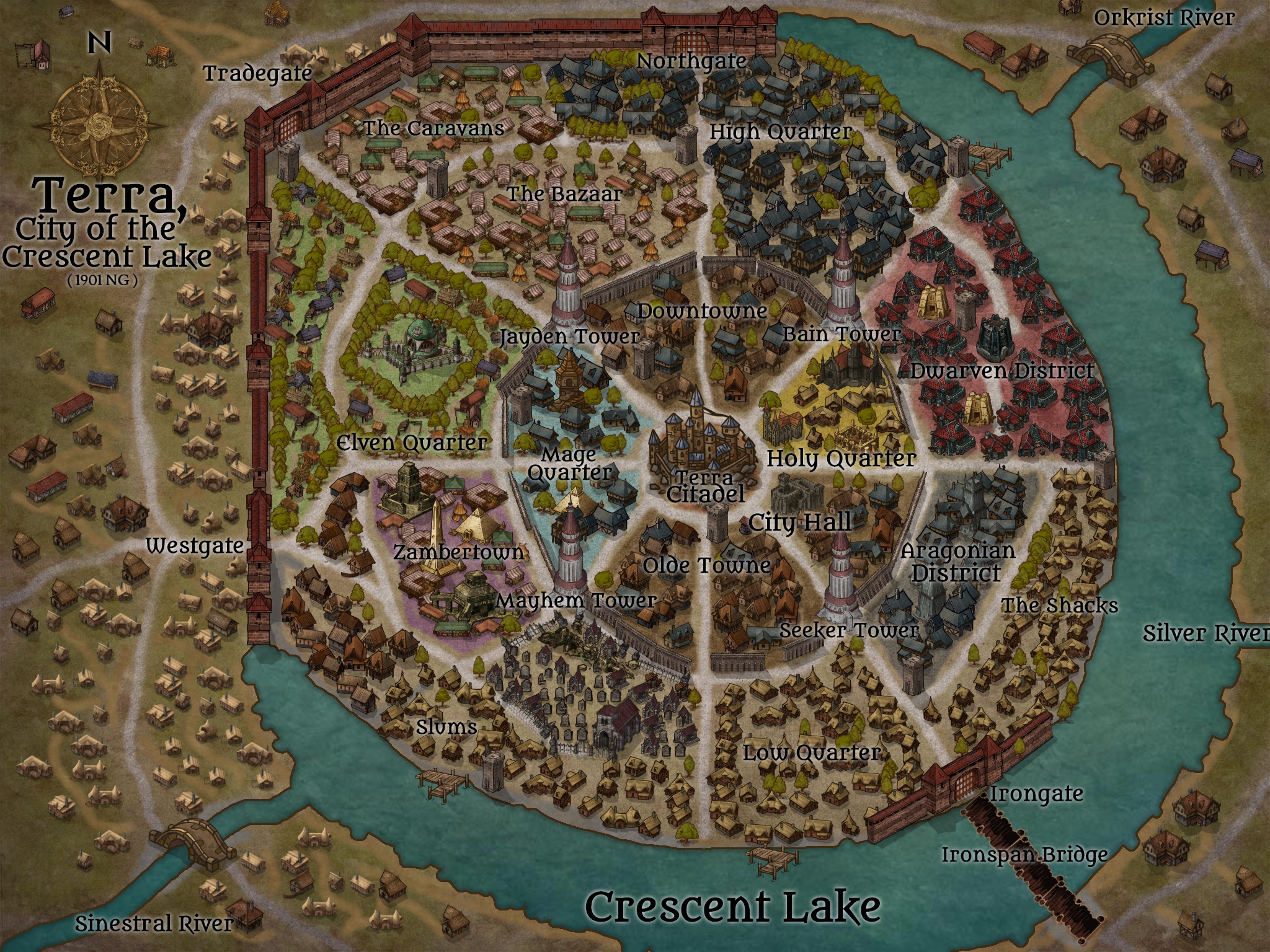