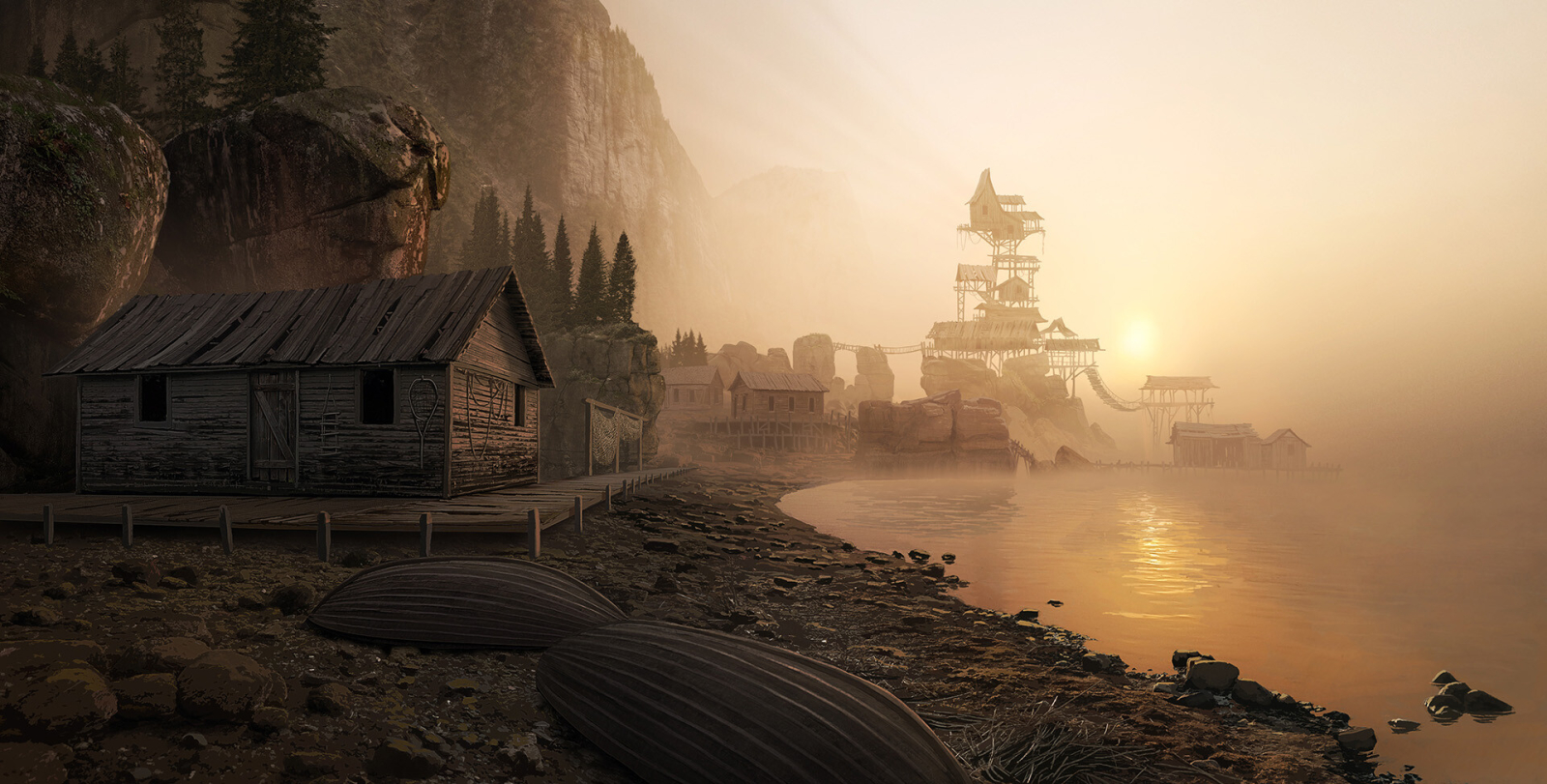 Muddy, foggy, cold, and generally miserable, Greyhook sits upon the rocky shore of the northern coast of Terra Main, upon the Pale Sea.   Currently, Greyhook remains a dismal, rather depressing place, unphased by the passage of time or most dealings of the outside world. Some people come here to hide, others yearn to escape. Most are resigned to their fate of subsistence.

The village is nearly all human, with only a few Elves, Dwarves, half-Elves, Half-Orcs or other demi-humans.   Many outsiders wonder why anyone would choose to live in such a dour place and partake of such a harsh lifestyle, but the citizens pride themselves on their rugged individualism and have little but disdain for the soft 'city folk' of Terra. When travel to a city is necessary, they generally choose to interact with Seavale instead. Youngsters yearning for a better life are not unheard of, but most citizens are multi-generational and proud of their heritage of cold seaspray and hard work.

Every five years, there is a general election of all adult citizens who vote for Mayor ("Burgomaster"). This Mayor then appoints who they see fit as Sheriff, Fishmaster, and other civic positions. There is no limit of terms a Mayor can serve, consecutive or otherwise. That said, few Mayors serve more than a single term, as their grand promises never come to fruition and the populace looks to another leader.   The Mayor (or 'Burgomaster', as its known locally) serves a 5 year term and is voted on by all adult citizens. The vote is major event in the village and the turn out is near 100% every year. The number of votes has even occasionally exceeded 100% on especially contentious years as Mayors-to-be deliver bombastic speeches, make wild promises, encourage voting and intimidate the other candidates and their supporters. A 'Voting Council' made up of the 7 eldest citizens are responsible for counting votes and verifying the legitimacy of the election.

A local militia made up the able-bodied men of the village are the primary defense between Greyhook and outside threats.

Greyhook has dozens of small, single family docks for fishing boats that reach into the Pale Sea, and only a few medium-sized berths for larger ships. The village has all of the basics; a blacksmith, a tailor, a general store, a few taverns, a church, graveyard, Mayor's 'mansion', a small cannery, drying house, a few supplementary farms, orchards, and gardens, an apothecary, barber shop, a small lumber mill, several boat wrights, and the ruins of a very small castle-keep.

The origins of Greyhook are lost in time, but it is widely assumed that it was formed by Human outcasts from Terra, either run our of town or pilgrims looking for escape from the limitations of the big city, perhaps a mixture of both. There are no records of the village's founding, so it most likely started as a single fishing hut that slowly grew into a functioning village over time as others came to exploit the rich waters.

Most structures that make up Greyhook are simple shacks, built from faded, rough wooden planks. A few stone or brick buildings exist, but they tend to be industrial buildings, such as the blacksmith or the mill. All buildings, even the Mayor's mansion and the central clock tower, are old and shabby, in need of repair, repainting, and maintenance.   Aesthetics are a distance second to pure functionality in this village.

Greyhook is located in precarious area; the locus of the Pale Sea coast, the Vastwood, and the rest of Terra Main. Sages have noted that the village is in the center of conjunction of ley lines, as forces of the ancient, dark sea clash with the timeless power of the fey from the sylvan wood. Adventurers have found many ancient stone obelisks, small temple ruins, stone circles, carved slabs, and artifacts of elder gods in the surrounding environs. There are rumors that the village is built upon the location of a primordial battle between the Arch Fey and the Elder Gods, the cause, and outcome, of which is unfathomable to mortals. 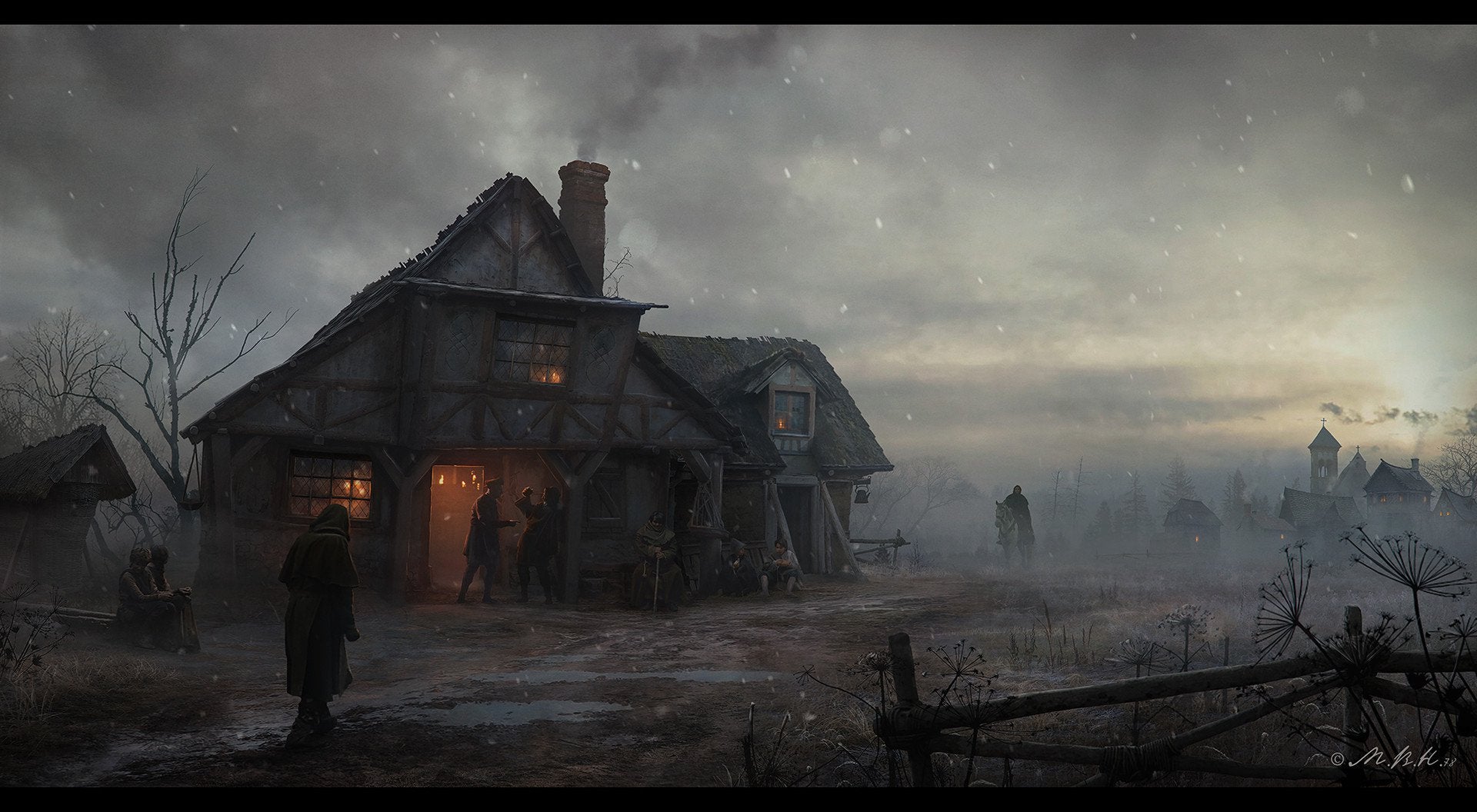 The Hag's Hole, the tavern at the outskirts of Greyhook