The capital city of the Dwarves, high inside Skytouch Mountain, is last bastion of the once expansive Dwarven Clans.

Despite this being the capital city of the Dwarves, less than half the total population is made up of Dwarves. Humans make up the largest minority, followed by Aragonians, Elves, and Zamberians.

A representative from each Clan forms the Council, from which a King is elected, generally for life, but there have been exceptions.

Skyharbor is nearly impenetrable... especially without some sort of teleportation or plane-shifting magic. It carved from within the peak of the mountain, surrounded on all sides with sheer cliffs and screaming, frigid winds. The entire circular city is ringed in anti-aircraft weapons, inlcuding ballistae and catapults on rotating platforms.

Easily the largest collection of adamantine and gemstones, refined or otherwise, is found in Skytouch, and their airship yards are second to none, in terms of sheer volume of production.

Carved from the living stone of Skytouch Mountain 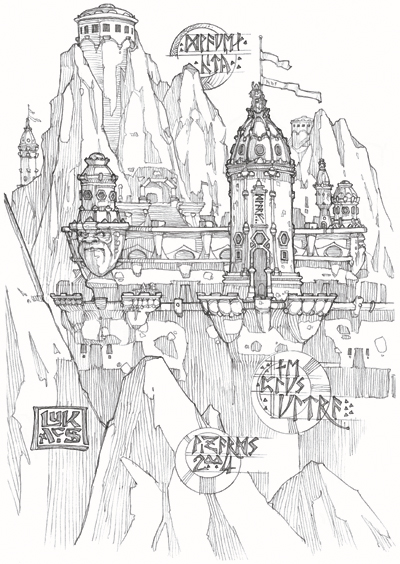 
Remove these ads. Join the Worldbuilders Guild
Cities and Towns