Myst Sensitivity, it must be firstly stated, was a "condition" but not an "illness". Therefore, it would be more helpful to understand it as a "state". The term, while commonly understood as "being capable of magic", was far deeper than that. The term Myst Sensitivity only existed among the current and past Crystal Circles. Magecraft in kingdoms outside of Qal'ath were more likely to use the term "magical aptitude" or make references to sorcery. Such phraseology would also be found among the commonfolk within Qal'ath.   That said, to the scholarly within the Realm, it was understood to be

...those to whom attunement to a particular Element was especially strong, permitting a being to invoke an influence on or through said Element, via incantations, weapons or simply the will of the mind.
Identifying Prospects Vol II

Why did they automatically link an ability to conjour, invoke or make incantations with the Erdénaii? The reasons for this can be found throughout the history of magecraft in Qal'ath and it is often quoted that.

We exist within Nature, rely on Nature, impact Nature and are impacted by Nature. It surrounds, infuses, protects, attacks, creates and destroys us. We can do nothing which does not affect Nature's balance, for good or evil.

So, while apprentice mages may never have understood that their powers were infused with Air, or affected the ground they walked on - the fact remained that they drew on one or more Elements, only to release that energy back into Nature, usually in a different form.

Not in an objective way that would satisfy the objective scholar, no. In ages past, the Crystal Circle would find "prospects" - people who may, or may not, have the potential aptitude. Sometimes this would be those who accidentally created "unusual phenomena" (as done by Farynna in Kindness in Anguish). In other cases, an established Mage may simply sense the dormant power lying within a person and bring them before the Circle.

Whatever the reason, Authorised Mages would then gather prospects once a year into a temporary school of sorts. The basics would be taught and guidance was given. If, after a week of such tutelage, the student could not invoke even the most common of incantations, then they would usually be returned to the normal education system within their town or city. No prospect was evicted dishonourably, however disappointed they were. For "prospects" were simply a way of finding the nuggets of precious metals from the rocks.

Trying to find the "gold nuggets among the rocks" when seeking workers for your forge, or students for your school, you should always be aware of this central tenet of an individual's value:   Many mistakenly assume that expensive lumps of metal unearthed are more important than the common stone in which they are found. While gold, silver and gems are beautiful, conduct certain spells efficiently or enhance one's appearance, it is the "common stones" that form the foundation of society. Without these, the more "precious" stones would have neither value nor use. Yet stone is valuable in its own right. It is consistent, sturdy and only slowly weathered. Likewise, those foundational to our societies must be highly valued. The beautiful and gifted ones come and go, but the everyday person is ever-present. It is from how the lowly are treated that a kingdom rises or falls.
"On the Value of the Individual" (page XXIV)
(Author Unknown)

Thus even a "failed" prospect was guided to a different path for their future, rather than left wandering around aimlessly.

Where feasible, a Prospect would become an apprentice to one Master, usually one with similar aptitude or attunements. While the ideal was always "One Student to One Master", in times past it had been more common for a Master to train two or even three Apprentices.

While officially apprenticed, these students were granted temporary Authorised Mage status. This recognised that their training may require the exploration of their arts when not in the company of their Master. While a Master would not be stripped of this status by the actions of an Apprentice, should a Master lose their Authorised Mage status, so did all their Apprentices.

Multiple Sensitivities and Non-Elemental Ones

While it was believed to be true that a person would be primarily sensitive to one of the recognised Six Elements, this did not mean a person was only attuned to one. Furthermore, a Mage need not even be greatly sensitive to an Element to weave spells that included it. This is simply due to the above quote about being "in Nature" and all things being connected.

Thus, if a Mage studied and communed with "secondary" Elements, it would serve only to make their incantations more powerful. Simple examples would be And so on. Therefore, a Mage could be, or become, more sensitive to multiple Elements, but rarely would more than one be truly mastered.

Any scholars reading this document must also be made aware that spellcraft formed - or forms - only part of a Mage's skillset. Indeed, to rely on incantations alone could leave a Mage very vulnerable in many situations, not least if called into battle. While these "non-Elemental Sensitivities" are also called "Natural Abilities", many could be learned by those with a keen enough interest. The following list is not exhaustive, but will suffice as a guide:

Much of this document has focused on the past. The picture at the current year of 553AFD is vastly different. The current Crystal Circle was not training apprentices.

This lack of oversight has led to those with Myst Sensitivity to either be left not knowing why things happened around them, or to be taken in by Unauthorised Mages. While it should be noted that "unauthorised" is not synonymous with "dark or evil", in practice it generally led to a more unstable form of Magecraft. This is because of the perceived oppression and suppression of the mystical arts by Qal'ath caused extra bitterness and resentment within these communities. Given the aforementioned link with Nature, if a Mage felt downtrodden or oppressed, this would reflect in the methods used and results seen of their incantations. 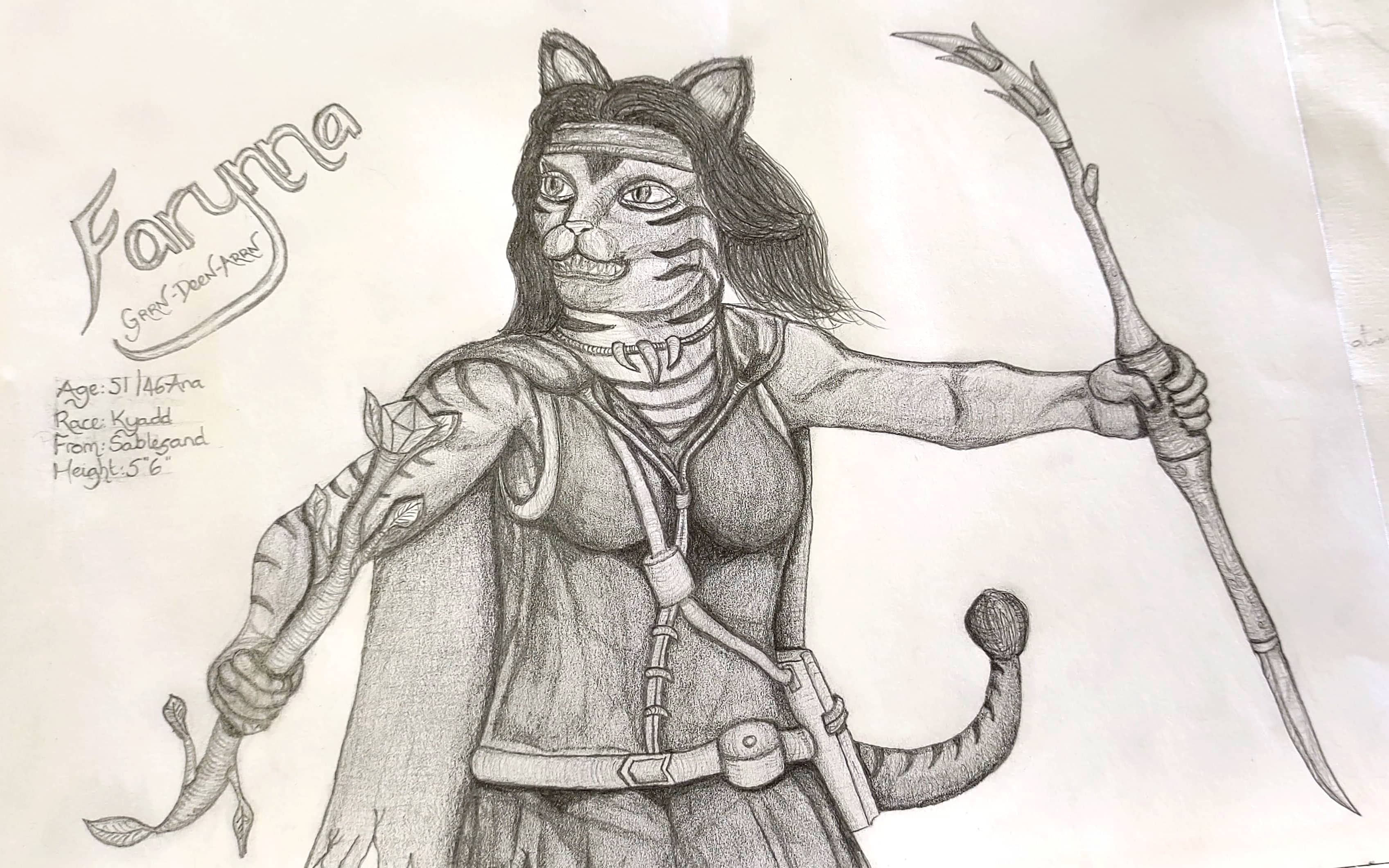 by F. J. Brodie (Me)
While the Crystal Circle had not taken apprentices, Frehghan had been subtly encouraging/fostering his servant Farynna who was Myst Sensitive, predominantly attuned to Light and Fire. Thus she was, unofficially, his "secret" apprentice - secret even from the said apprentice.   Half of the Circle was also aware that the other servant in the Crystal Circle Tower, Klor'asq, was also Myst Sensitive, though none had taken time to develop or mould this.

While, theoretically, any being could be Sensitive, there are past trends we may use as a guide to those less likely to be Sensitive.

Certain societies or cultures were structured in a way as to discourage displays of Myst Sensitivity - or whichever term that society employed for the same meaning. Kyadii tribes, for example, tried to keep mystical capability for its leaders and Seers in order to maintain authority and a level of control. Even the Foyii only trained a few Mages, though this was for a different reason: many Woodsmen - arguably most of them, could become Mages of Erdé because of the power of that Element in the Forest of Doon. So it was only the few that expressed a real interest in pursuing the calling of Mage that stepped onto that path. The Myst Sensitivity of all the other Foyii can be observed through what could be called "non-magical" behaviour: the ability to tree swing even when said trees were far apart, the cat-like silent landing when jumping, the accuracy of bow-craft and the distance they could physically see, are some examples.

If you're on a larger-screen, hover your cursor over the top options to view all links.
Type
Magical
Children