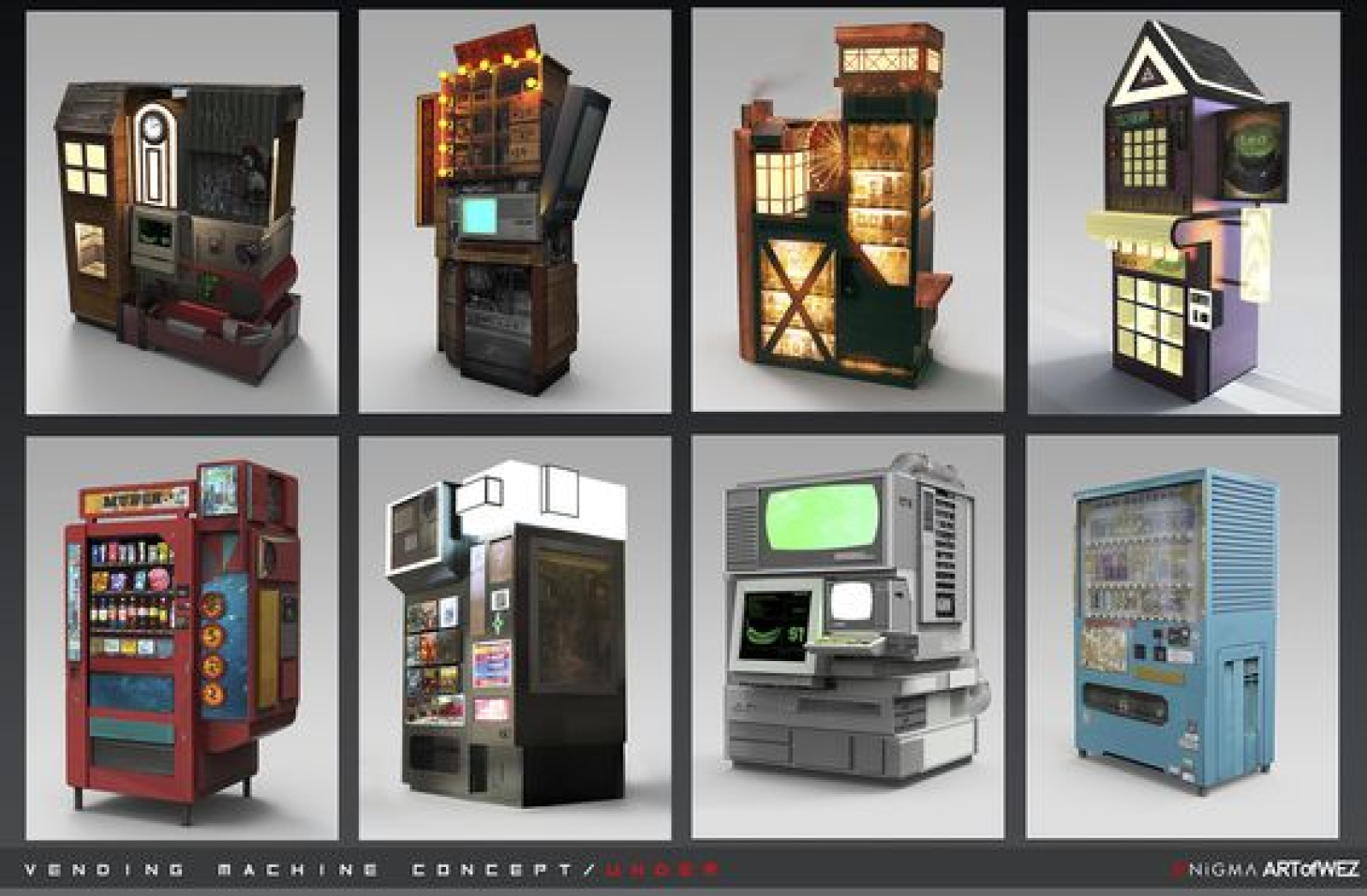 Javamats are automated vending machines that provide the citizens of Megacorpolis with Java, the most popular drink in the world. They are ubiquitous across the Megacity, as part of the city's fabric as advertisements or misery. Every citizen has their favorite among the millions of Javamats, and most would rather lose a family member than their Javamat.

Java - what coffee wishes it could be.
— Javamat Advertisement

Javamats come in as many brands and types as Java does, ranging from ornate and luxurious to brutally utilitarian, depending on where they are. They are usually themed to the corp that operates them, the sector they're located in, or whatever marketing campaign going on at the time. Most are box-like things about two meters tall, dominated by a single display showing all the various drinks it sells.

Some Javamats give the same Java-slurry no matter what consumers pick, confident that as long as it's Java, no one will be able to really tell the difference. 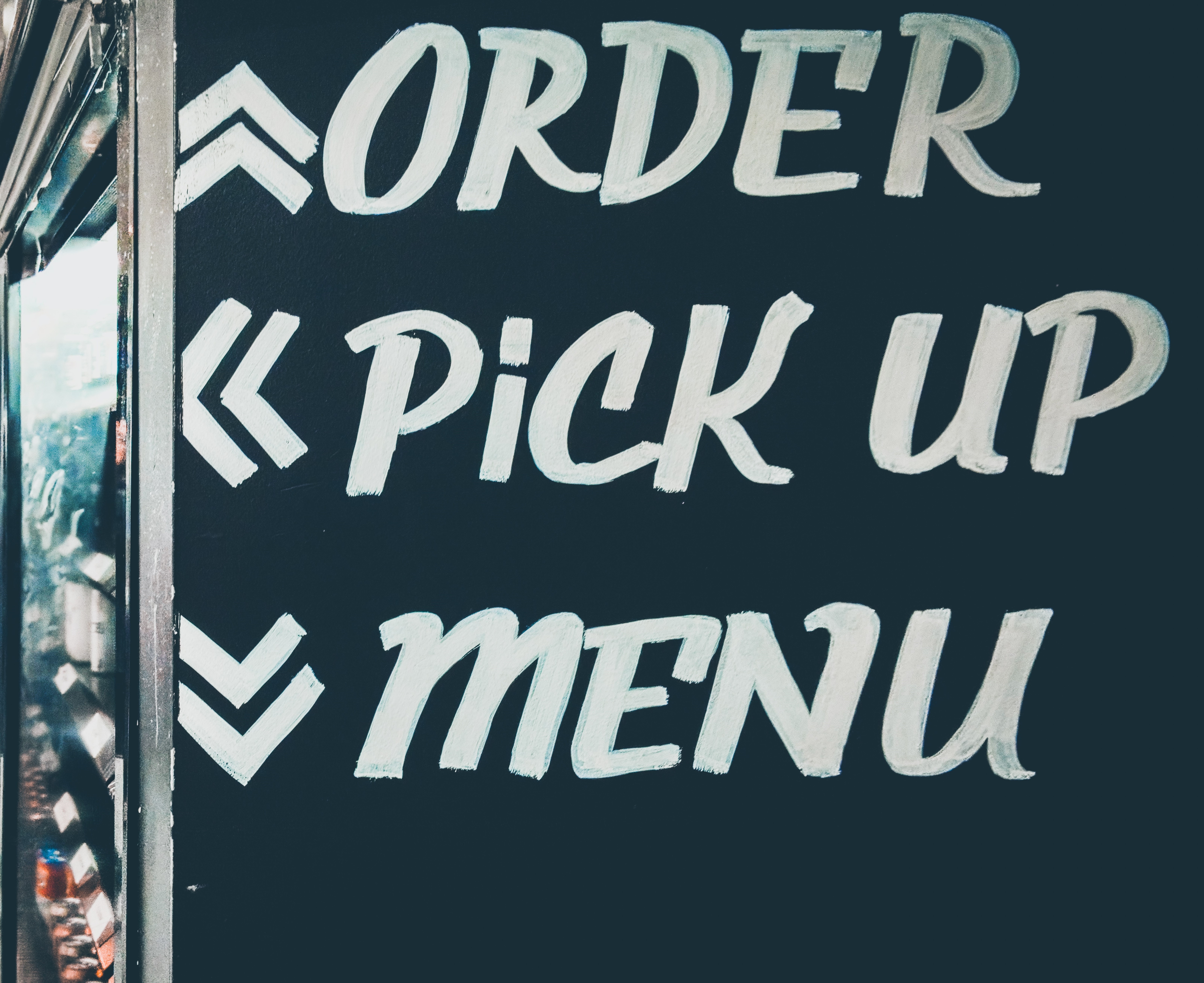 by Obi Onyeador (Unsplash)
A tangled spiderweb of pipes connect every Javamat to brewing vats in central facilities to ensure they never run dry, taking its place along broadband cables and powerlines as things absolutely vital to Megacorpolis.   Maintenance workers labor under a siege mentality, as these pipes are constantly threatened by rival corporations, malcontents, terrorists, or Java-desperate consumers. Since most of them need Java to get their work done, motivation is usually excellent.
Javamats are always plastered with advertisements, both physical and AR, varying in how intrusive they are. Knowing they've got the addict dead to rights, some even force the consumer to watch an ad before they can have their Java. Others feature helpful voice clips that make additional suggestions or will even implant AR waypoints to nearby stores, based on a quick scan of a consumer's previous purchases. All in all, Javamats are highly valued advertisement and propaganda spaces.

Nothing beats original! anyone who claims otherwise is your enemy - Get your Java today!
— Java Inc Ad on Javamat loudspeakers

Competition between Java brands is fierce, and the Javamats themselves often become focal points in this struggle for capitalist supremacy. Not only are they lucrative in themselves, but nothing fosters brand loyalty quite like addiction. The placement of Javamats occasionally leads to turf wars between megacorps, fighting over the best spots to sell Java, and "influence consumer habits".

For this reason and to deter theft, many Javamats come with automated security measures, ranging from pepper-spray to rabid Cybiders.

Loyal consumers often join the fray to make sure their preferred brand is the one that will be served, by whatever means necessary. Casualties usually fall within acceptable parameters, but festering feuds between different Javamaniacs can cause trouble for decades after the dust has settled.   Java shortages are even more disastrous, with a Mad Max-style apocalypse sometimes reigning within certain streets or sectors before order can be restored and lessons studiously avoid being learned. Once the corpses are cleaned up, and the flow of delicious Java restores, there's always a surge in profits as desperate consumer lines up around every restored Javamat. 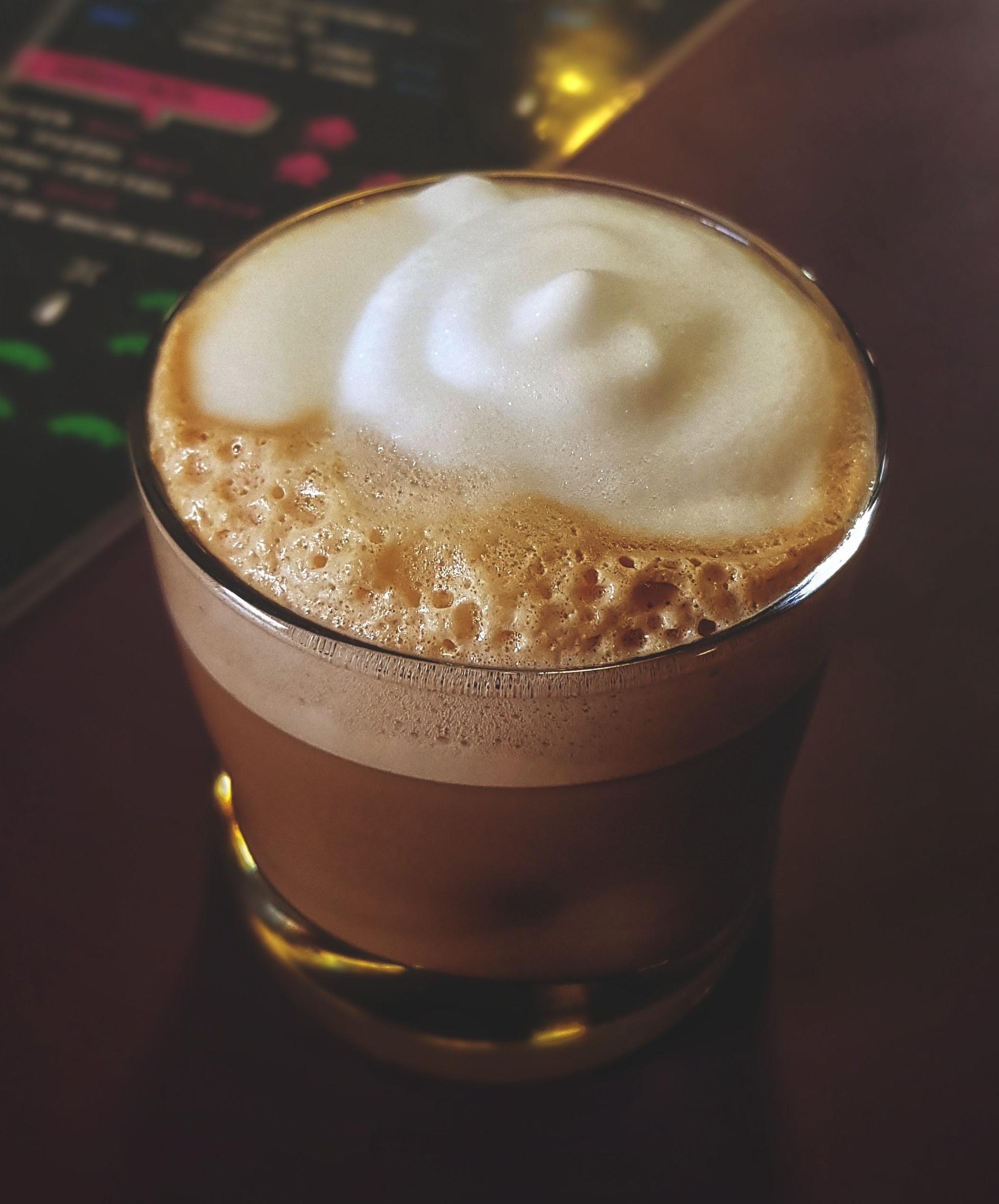 by Anderson Barbosa (Unsplash)
It isn't uncommon for Javamats to become something like shrines during these riots and even outside them. Java cults worship them as deliverers of the divine nectar of life, usually in the throes of Javamania, and will only occasionally perform bloody ritual sacrifice for their patron Javamats. For most citizens, it's a risk worth taking when you just have to get up that morning.

A powerful and addictive stimulant with a pleasant taste, Java is the drink of choice for citizens across the city. With its heady mix of caffeine, nootropics, and other energizing chemicals, it has imbued millions with maniac energy for decades.   Sure, sometimes your teeth fall out, or you have a cardiac arrest when your heart beats like a hummingbird, but it's hard to say no to another cup.

Java, the brew of the world!

Java makes the world go around. Consult your doctor before consuming this delicious caffeinated beverage. Terms and conditions apply.

Impossible, even, but that's by design.

With such a delicious taste and wide range of productivity-enhancing benefits, it's no wonder that some consumers grow a little too fond of their Java. These Javamaniacs become physically dependant on the brew, beyond even the most caffeine-chugging corporate drone, and that's before the mutations start.   Sufficiently deprived, Javamaniacs will do anything to get their morning cup, including breaking Javamats or the pipes that feed them. Armed camps of citizens sometimes spring up around Javamats to keep guard when Javamaniacs are around. 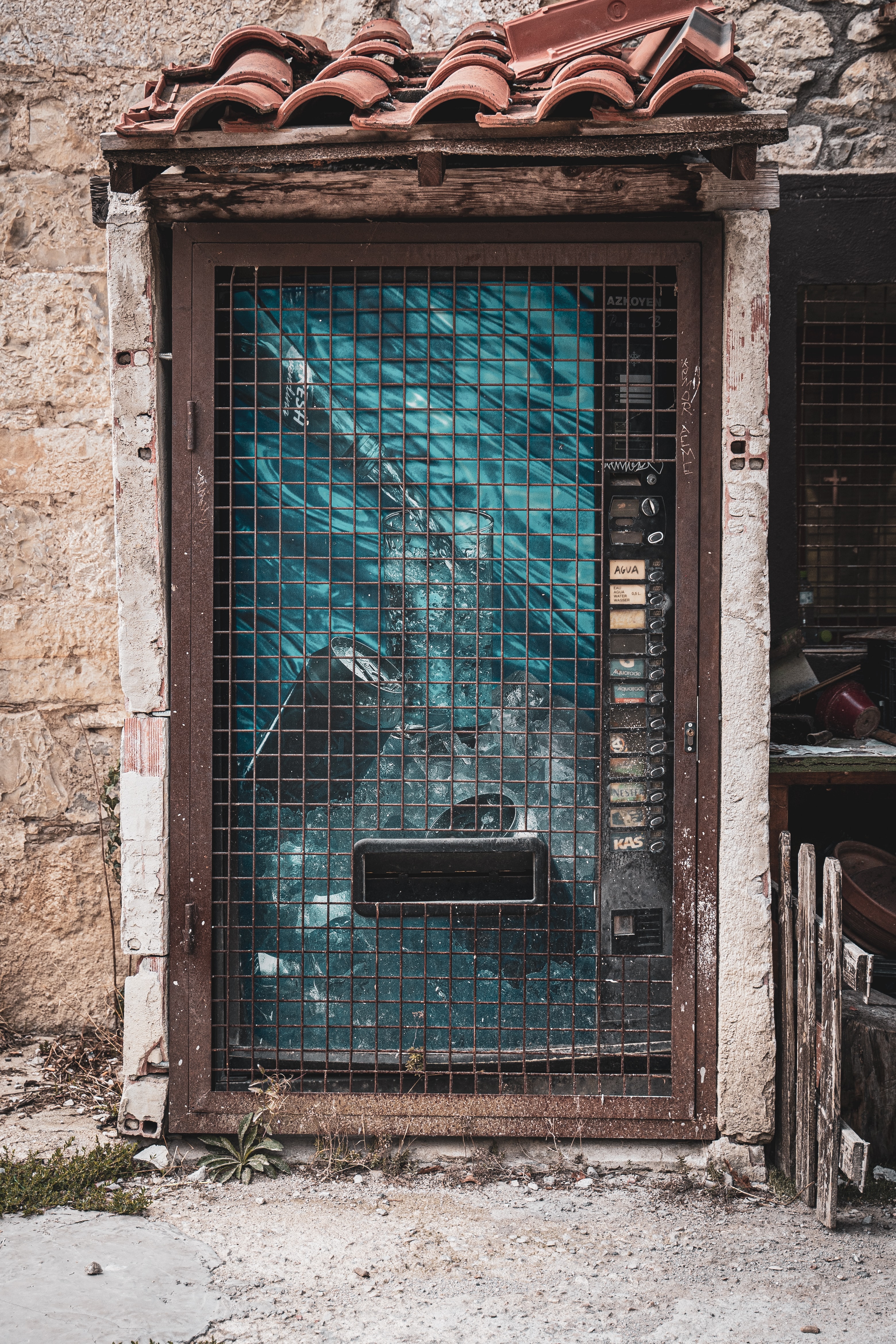 Rumor has it that you can have too much Java, as impossible as that seems. Any stories of horribly deformed creatures that were once men, born from overindulgence in the wondrous brew are probably the fantasies of those contrarian tea-drinks and can be safely ignored.   There's no such thing as Javabominations, Citizens; now go about your day with this free cup of Java, on us. You're welcome!

Despite being completely automated, some Javamats in particularly wealthy areas come with baristas, as no one could reasonably expect a rich, important person to press a button. 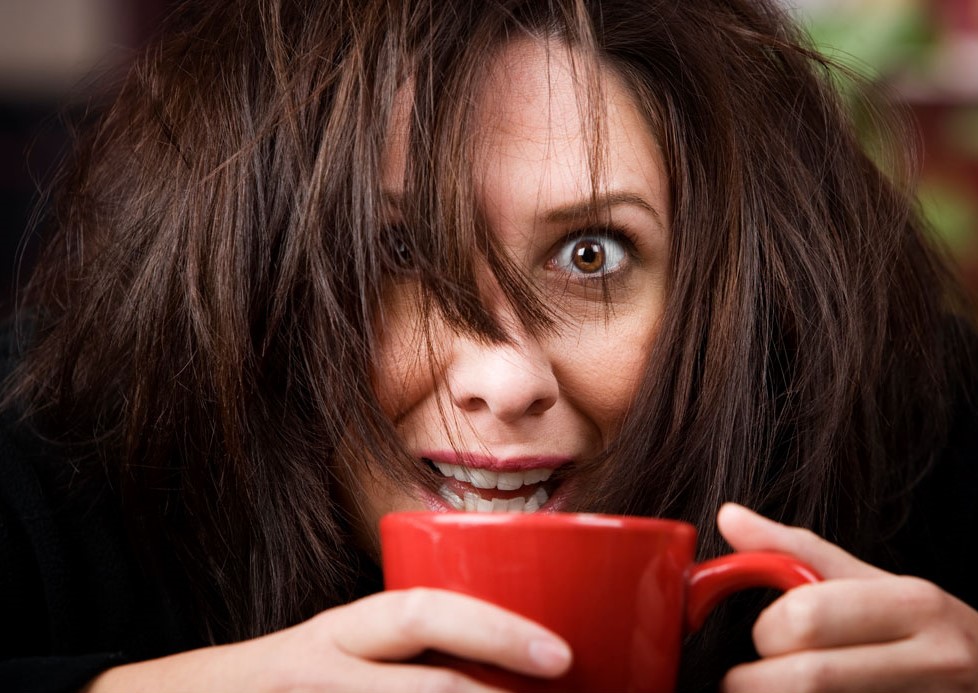 "Casualties usually fall within acceptable parameters" that says it all XD   I love how some javamat jut give the same java whatever people order XD   "as no one could reasonably expect a rich, important person to press a button." lol   Do some brand sometimes create disruption in their service just to create the frenzy since they results in higher benefits afterwards? Or would that put them at too much of a disadvantage compared to concurrents?

They'll never know the difference, those coffee addicts!   And.. Yes, absolutely. It's risky business, though - if you wait too long to reconnect, citizens might rush into other areas or to competitor's javamats. :D   I might update the article with something about that! :D

What a twisted and bizarre nightmare is this article! Excellent! I need a Javamat close to home :D

'Despite being completely automated, some Javamats in particularly wealthy areas come with baristas, as no one could reasonably expect a rich, important person to press a button.' Hahahahahaa.

By the Java! It's where it all began! ...at least part of it anyway.   And those rumors of nanites in the Java might be false ... but what of those Java brand mascots?   How often are they deployed to cause a Javariot, just to harm the distribution of an opposing brand, right when that new delightful aromatic flavor of the month is about to be locked, loaded, and deployed?!   Aside from those contrarians, are there any who have tried to barista their own brew? Contrive to create their own concoction so to glean special benefits from a combination of the brands...   Not that would work of course. I mean...who really would believe one could gain special powers or something from the right mix of Javas??   Hm... I think I need to update the Megaspiracy board with some new pins...   ---   LOL!

Java shortages are even more disastrous, with a Mad Max-style apocalypse

That? Now from that I'm envisioning a Judge Dredd-like armed forces that are deployed when the Java brands need to distribute their Java and get the crowds under control! It'd be good PR of course!   :D
— The wolf of Tales of Justice, Creator of Legends of Elohey, Star Wars: Shards, Windtracer and more!

Hmmm I wonder how susceptible the pipes linking these machines are to rust, or other containments of it's more like PVC piping. Itd be a bad day if one cracks or simply breaks, letting who knows what into the pipes. Wait, no. I'm not a terrorist, I swear.

I think the pipes themselves are okay... I think people messing with them is fairly common :D

Wish I could like this article twice. Once for the content, and again just for the word "Javabomination."

Sometimes you get the bear.

Hahah, thank you very much :)   Thinking of fun puns for Java (Javamania, Javamat, Javabomination) was a lot of fun :D