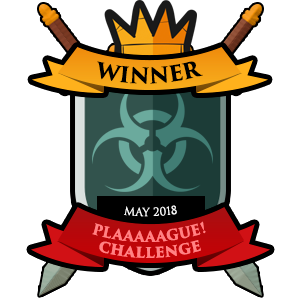 The streets of the city were empty, no smoke rose from the spires of the great enchanted forges, the ships lay fallow in the harbour. I passed a golem, motionless where its magic had finally depleted, still holding a pallet of goods headed for some construction site it would not reach now. I pulled my hood closer and hurried on. The streets were never safe without mages.

Bylon's Pox is a rare but virulent disease, found primarily in eastern Macalgra. Also called Mage's Bane, Surah's Curse, God Curse or Xeran, it - while almost never fatal - is one of the most economically devastating diseases to plague Macalgra. Bylon's Pox is highly virulent and mortals and immortals alike can fall victim to the Pox. It is named for Bylon Arl, the scholar whose treatise The Binding Disease, an essay for the Astute Mage published in 2781 YSB was the first comprehensive description and study of the Pox.   Outbreaks of the Pox grind the framework of the modern economy to a halt, disabling mages, Familiar and Divine alike. In the worst of circumstances an outbreak of Bylon's Pox can be life or death for millions.

Transmission of Bylon's Pox is largely a mystery; it can inflict patients who have never met, nor been in proximity to a sufferer. It was theorised by Bylon Arl that the Pox is transmitted through particles of infected Aether, which drift off the inflicted and are moved in the atmospheric currents to cross vast distance. As it stands, Bylon's theory is widely accepted but has no scientific study to support it. This is primarily due to the prohibitive nature of studying the magic surrounding patients without becoming infected oneself.

By Bylon's model cases of the Pox begin when the corrupted Aether particles are dragged into the Animus by its natural assimilation of magic. Thereafter they bind to the victim's aura and develop into a semi-sapient infection which consumes the inflicted's magic. This drains the patient of all magic that isn't bound within their Animus' core. Those individuals whose souls are too small to have excess magic seemingly do not suffer any further symptoms, and the corruption dies briefly after.

Patients inflicted with Bylon's Pox experience a number of symptoms. In the initial stages it includes giddiness, exhaustion and an inability to control the power level of spells. One to two hours after the initial infliction, the individual loses the ability to cast any coherent spells - with most magic backfiring. Even lighting a candle becomes impossible within twelve hours, and it is accompanied by sweating, a fever and lightened skin. This state usually persists for six to seven days, but will last longer the more powerful a mage is.

The Pox is essentially immune to the medicine known to both man and Divine. The inflicted are caution to have bedrest, eat and drink regularly, and wait. Since healing mages become inflicted if they attempt to assist a victim, they are never recommended. Some 'traditional' healers proscribe herbal concoctions, but most qualified alchemists are of the opinion that potions will only prolong the affliction by feeding it magic.

Recovery from Bylon's Pox takes over a week, but may last up to a month for particularly powerful individuals. Upon exhausting an individual's supply of magic, the corruption dies out and the individual will begin to recover. Recovery is slow in most cases, and the individual will be quickly afflicted with exhaustion when attempting to use magic for up to several months. It has no known long term side effects.

The disease is almost exclusively confined to individuals with large Animus. Primarily mages, but also Familiar, Divine, Dragons, and any other magical species.

As of the present date, no assured prevention methods exist. Many mages swear by protective talisman necklaces, potions or wards but as of yet none are proven to work 100% of the time, if even at all. During outbreaks the market for such talismans becomes large, and many seek to profit from this industry. Quarantine is one of the suggested methods for preventing infection, and large numbers of mages leave the cities during outbreaks, to seek remote retreats. Many of the most wealthy mages maintain country estates partially for this reason.

Outbreaks of the Pox are relatively rare, but tend to occur around once a century. The origin point of the disease is unknown. Some superstitious individuals blame the Divines, especially Frugi or Drewel. However, the condition effects even the Divine and other Immortal, making such unlikely.

The first known outbreak of Bylon's Pox was in Ryseum, around 2054. A minor outbreak, it however left hundreds of mages bedridden for weeks. However, the condition gained most of its notoriety in 2544 when it coincided with the outbreak of the Dark Plague. The sudden infliction of Bylon's Pox on most of the east's healers and mages led to the death toll of the Dark Plague being tens of times worse than otherwise, and devastated the economy and population of the Sura Empire.   The first proper treatise on the disease was released in 2781 by Bylon Arl, though earlier works include Jakius Ti's The Trembling Curse, a bane of mages in 2514, a scholar who had attempted to research the disease. Bylon was inflicted with the disease as a teenager, and thereafter become enthralled with studying it. He remains the foremost expert of the condition to ever live, with his treatise the most important text on the subject some five hundred years later.   Perhaps the worst outbreak of Bylon's Pox took place in 3144 when an infected Familiar fled back to the realm of their parent Divine, taking Bylon's Pox with them. The Divine argue endlessly over whose child exactly was responsible, but the result was the same no matter where it began. Dozens of the gods were struck down with the disease, essentially paralyzing the Divine realm for over six months.   In 3245 YSB Arven, Divine of the Sun, became infected and the sun was briefly extinguished for just over a week. Since the first outbreak within their realms, many of the Divine become cautious at the first sign of a Pox outbreak and close their realms when news of it reaches them.

Due to the devastating impact of the disease on the highly magic-orientated economy of the modern world, Bylon's Pox is feared by many. An outbreak can disable a city, country or continent. Without magic users factories, shipping, armies and agriculture can quickly shutdown. Many governments now operate long term food stores due to the risk of an outbreak leading to the loss of an entire year's harvest.   The danger it poses has led to many folktales about the disease, including various mythical explanations for its origin, to it functioning as a common challenge for magical characters in poetry and prose alike. It has become something of a trope for the villain to use the Pox to try and foil the hero.   Outbreaks of the Pox tend to lead to short term societal breakdown. Many see it as an opportunity to act out when the Divine will not dare to descend and punish them and while mages are unable to be called up - leaving law and war in the hands of the mundanes. Rioting, looting and civil war can all take place in the wake of a Pox outbreak.

Definitions
Animus The soul of a sentient or sapient being.
Aether Magic in its raw form, free flowing.
Dark Plague A plague that affected Macalgra in the 2500s, killing millions.

Written for the PLAAAAGUE master's monthly challenge in May 2018.

This article is all the METAL \m/ and I can see it work so nicely into an RPG campaign as well. Great work Isaac