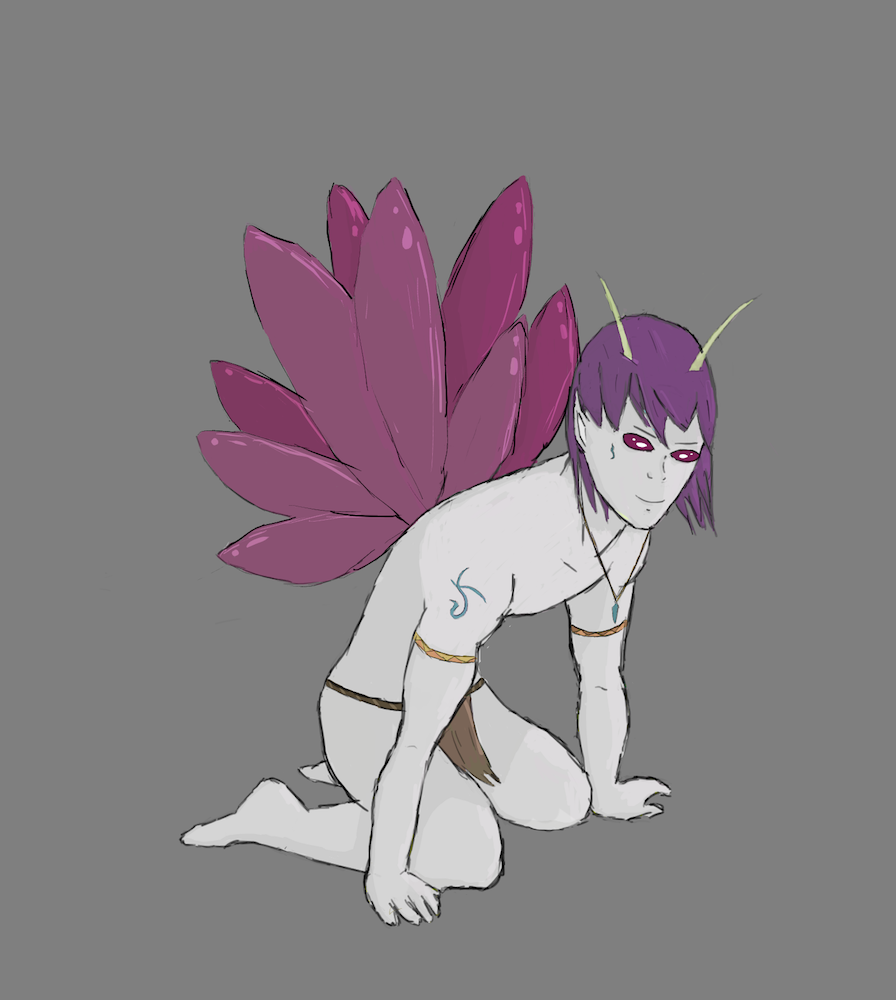 Treekind are one of the three subspecies of Whispers. They have a green to brown colouration, resembling the bark or leaves of trees, and are the 'midline' of Whisper kind in regards to abilities and anatomy. They are the most common form of Whisper, making up the greatest portion of the population by far, and filling a diverse range of roles from craftsmen to educators.

Stonekind are the largest of Whispers, being significantly stronger than most Whispers and closer to Human-normal size, with a dull grey to black colouration. Their antenna are smaller and their wings larger than Treekind. They possess telekinesis, unlike any other kind of Whisper, but their telepathy is shorter range, and they are vulnerable to the mind-control of Mindkind Whispers.

The Whispers are the strange and exotic people of the Erewa Isles. Small, elfin creatures with great psychic powers, famed for their crafts and their hospitality; the Whispers is a name applied by humans; they call themselves The People.

Whispers are divided between three subspecies or castes, and ruled by a very strict system dividing these castes. Members cannot pass between castes, and their life is largely dictated by which they were born into, as well as their family.

Mindkind are both the leadership and scholarly caste of Whispers; they are smaller than other Whispers, with a pastel pink to purple colouration, and possess far more advanced psionic abilities and larger antenna as a result. This includes the ability to enter unwilling minds and to compel Stonekind Whispers. They are longer lived than their fellows, but also breed very slowly, leading to a tiny population that is slowly dying out. The Court of Isles is formed of Mindkind, with all members of their caste having the right to vote upon affairs effecting Whisperkind. They are led by the Lineage of the Mage, descendent of Whisperkind's creator, the female members of which hold the hereditary leadership of their society.

Whispers are a generally small species, the largest of them a foot shorter than humans. They resemble humans in many ways but they have lighter weight bones in a honeycomb structure, and very limited musculature. All Whispers are born with a pair of wings, resembling those of an insect, and two antenna that curl back from the forehead.   Whispers are divided into three castes or subspecies, based on lineage and genetics. Treekind are the most common members of the species, with a green to brown colouration. Mindkind are generally the leadership caste of Whisper society, with increased psionic capability, while Stonekind are significantly larger than other Whispers.   Female Whispers possess only vestigial mammary glands like males.

Whispers are a dual gender species, an evolutionary remnant from their origins, but males of the species are infertile. Females will reproduce asexually up to ten times in their lifetime, usually birthing a single child each time. These reproductive cycles are triggered by hormones supplied by the body when the climate and food supply are right. Generally, female Whispers take several mates into a family unit, who will assist in the care of their children. Reproductive maturity is around the age of 40.

Whispers dwell almost exclusively in the mild tropics of their home island chain. They are well adapted to the numerous islands upon with their towns are built, able to traverse them by flight. Their home climate is also devoid of larger predators, which the usually docile and unadvanced Whispers would be unable to compete with.

Whispers have narrower faces than humans, generally smaller with lighter bone structure and sharper cheekbones and chins. Small pointed ears that curl back close to the skull, and hair that resemles a human. Their eyes lack human anatomy, having no differentiated iris colour. The iris and sclera are the same colour to each other, usually crimson to purple, with a pair of main pupil and smaller pupil that are pure white.   Neither gender has bodyhair or facial hair.

Whispers are extremely gifted in psionics. They possess innate telepathy, which allows them to communicate with both their own species, and to establish connections to humans to allow communication with their consent. Normal Whispers are unable to communicate with the unwilling or unconscious, but Mindkind can achieve this.   All Whispers can hover or fly through use of their wings, which while normally unable to lift them, can use some of their innate magic to achieve this affect.

Due to the non-vocal nature of their communication, Whisper names are simple and usually indicate something considered important about the individual. This may change over time - as children, it is usually a physical trait. As they grow older, this may continue to be referenced but achievements, careers, personality and even where they live may also be part of their name.   Example names include Strongarm of the Beach, Talking One from the Crooked Island and Old Wisespeaker of the White Tree, though the location component would not be used within a group of individual's familiar with each other. But in communication, images of the individual may also be sent, so names are not always used. Nicknames may also develop, shortening the name or playing with by referencing something related to the actual name in a short of 'in joke', such as an older matriarch being known affectionately as Wrinkles.

Male Whispers are expected to be larger than females, as well as more muscular, in order to protect their mate and mate's offspring. Females are generally ideally slight and short, but with larger hips, which is viewed as a sign of being more likely to have a successful pregnancy.

Due to the non-role of Whisper males in reproduction, female Whispers have the primary role in courtship. Selecting an available male and inviting him to participate in a family unit. Courtships are short, and relationships are often treated much like a business relationship. Many female Whispers will take at least one Stonekind mate due to their strength and ability to act as guards and labourers.

Whispers have far more limited technology than humans, having never required its use. Their quiet islands have few threats to motivate technological advancement, they require no source of food, and can use telepathy for communication and telekinesis for moving more difficult objects. Their kind is naturally pacifist, and weapons beyond the mind are nearly unknown. They make their homes primarily in trees, either amongst the boughs or in hollowed trunks. Flight has also seen little need for roads to be built or for beasts of burden to be tamed.

Whispers entirely lack a written language, due to their psychic nature of their communications. They can innately understand most minds, and never speak aloud as a result.

Whispers, due to their warm climates, limited technological advancement and the low level of gender dimorphism, have never invested a great deal of time into clothing or traditions or codes around it. Most members of the species wear simple loincloths made of the weaved fibers of a dried seaplant. Simple jewellery is common, and items of jewellery are often given as the sign of a mating.

The most important myth of Whisper kind concerns their own creation by the mage Abelia. The date of this myth is debated by human scholars, but as Whispers don't care a great deal about time, few of them remember or care when it took place.   Abelia was, in any case, an ancient mage who sought to experiment with telepathy through magic, a previously unachieved feat. Her experiments at first were unsuccessful and her methods grew more ethically concerning over time, so much so that the people of her home kingdom (which kingdom that was lost to time) exiled her at pain of death. They believed her mad and saw only doom in her experiments, seeing telepathy as something best left to the gods.   Abelia persisted abroad, and began to conduct experiments on native aborigines. Her magic at first proved dangerous and many subjects died, but eventually she ascertained that telepathy could be achieved by the vibration of Aether (magic) in certain frequencies. The method of how to achieve this innately avoided her grasp for many more years, but as Abelia grew closer to death, she achieved her greatest act.   The spell ultimately killed her, expending too much magic and destroying her soul, but in the process a group of subjects were mutated into the creatures she intended. The Whispers. She achieved a connection between the soul and the antenna that allowed them to manipulate pure aether for telepathy; a feat thought impossible and never since repeated, and changing their biology and society significantly to fit her personal ideals. Her children, also mutated themselves, have ruled Whisper society since as the Lineage of the Mage.

There had been a lot said about the Whispers. Iowhe had never met one, though their fame came before them. The goods they produced were found across Juventius, from the carvings in ebony and pracina wood that graced Tertius’ house to the ghe he was presently sipping. He put down the chilled drink and raised his eyes to the double doors that guarded the entrance to Sorio Villa. A servant dressed in white crossed the flagstones and answered the doors with a polite smile.

Iowhe had no part in this meeting, so he simply waited from the small sitting area in one corner of the entrance hall. The first Whisper entered on gauzy wings; Iowhe’s eyes widened at the pink skin in the shade of a sunset and the glimmering orange wings. Two antenna swept back over a loosely tamed head of pale purple hair. The Whisper was thinner than most humans, and shorter too - even floating she was more a foot below Iowhe’s standing height.