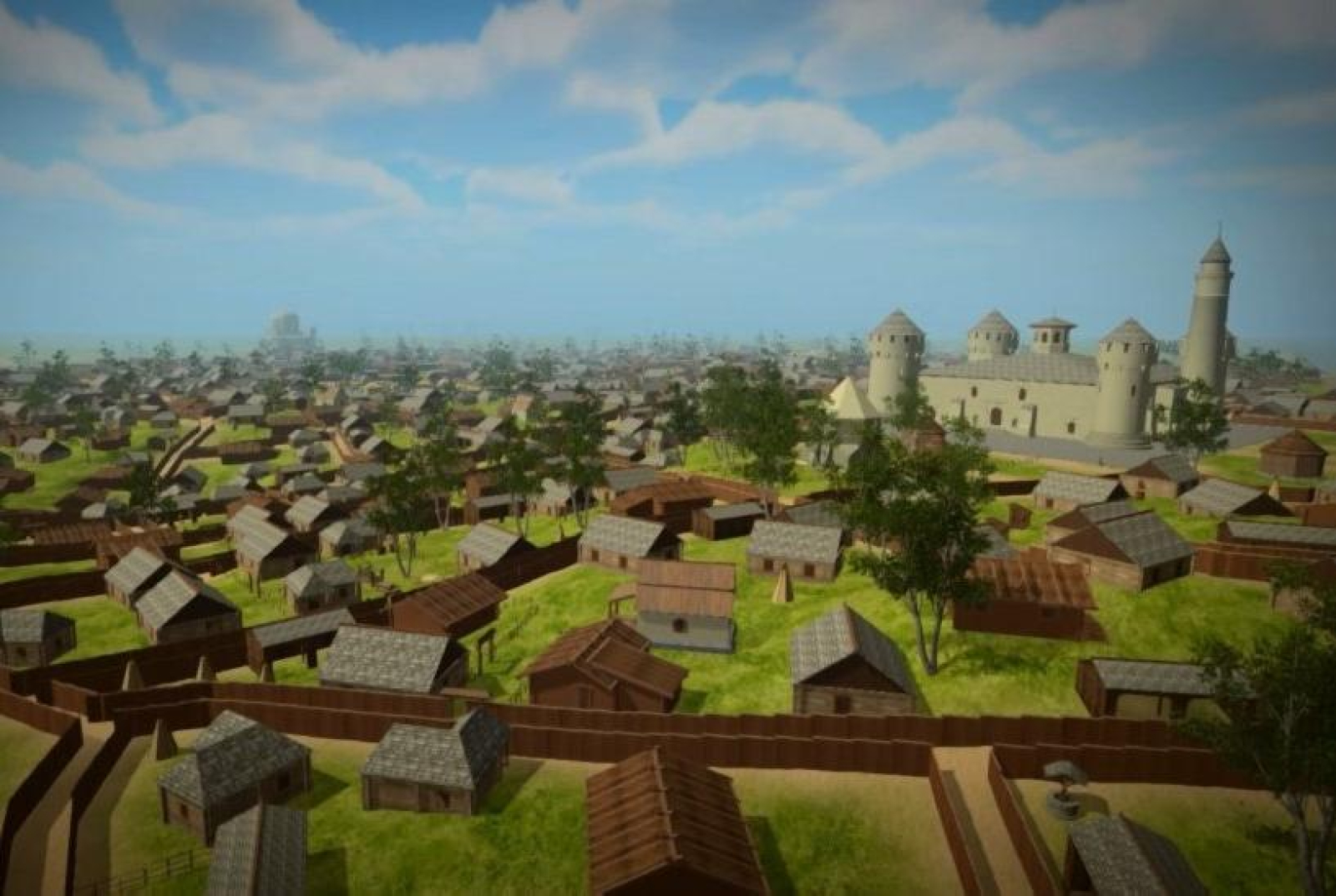 Udyn [ooh•DIN] is a major city on the Udena River. It houses tens of thousands of people, and is a major node on the north-south riverine trade. It is a transshipment center for Noriki slaves, many of whom are transported further south, as well as furs. It also has a large horse market for animals brought up from Atavask. Various other trade items, including spices and luxury textiles, flow north as well. Many items are sold at the central souk, which abuts the main mosque. The souk seems to operate daily. There are many other markets throughout the city.   Udyn is an old town, though it is not clear if its current location is the original one. Locals contend that it was founded by Kuz' tribes, and that it adopted the Bahite faith many centuries ago. Today, the main population consists of Kochmak speakers, but there is a fair number of Rakhmany, Noriki, Narty, Irii, and even Kuz'. The initial Kuz' settlement is supposedly in the same place where the Nart quarter stands today.   The town was largely destroyed by the Kochmaki during the invasion of over a century ago, but it has since been rebuilt, and in the last several decades, it has become one of the largest cities in the entire Khanate. Most of the buildings are made of wood, but there are a number of impressive stone structures, including the citadel (qala), mosques, minarets, warehouses, and other buildings. The walls of the city are wooden, however - because the city does not need to defend itself from its Khan with stone walls, and because it need fear attack from any other quarter. Most of the city is paved with wooden boards, though numerous alleys remain unpaved.   Udyn has two significant suburbs - the Nart Quarter on the city's western end, and Slave Island, offshore in the Udena river. The Nart Quarter houses the vast majority of the city's Gaalite population, while Slave Island is the transshipment node for the slave trade. The slaves are kept in warehouses on the island.   Udyn is a Bahite city, and since the recent conversion of the khans, it has implemented a set of policies designed to clearly differentiate Bahites from the dhimmi population. Dhimmis who reside in the city pay a poll tax. Moreover, they are not permitted to bear arms or ride horses through the city. They must also bear identifying marks - a clearly displayed blue ribbon for Gaalites, and a yellow one for Fogarma. Other color ribbons are seen throughout the town. In addition, no open religious display is possible for minority groups. Gaalite churches may not ring bells, or display crucifixes on the outside. Calls to prayer are openly heard throughout the city from the Bahite minarets, however, and crescent moons are openly displayed atop Bahite temples.   The city is administered by Amir Çengiz. The amir is not an independent ruler, but an appointee of the Khan, and serves at his pleasure.   The city has been the residence of Agapia Vladimirovna Anfisova for about a year. It was birthplace of her mother Akulina, and the home of her uncle, Hegumen Mitrofan. It is located about 230 versts southwest of Vladykino.