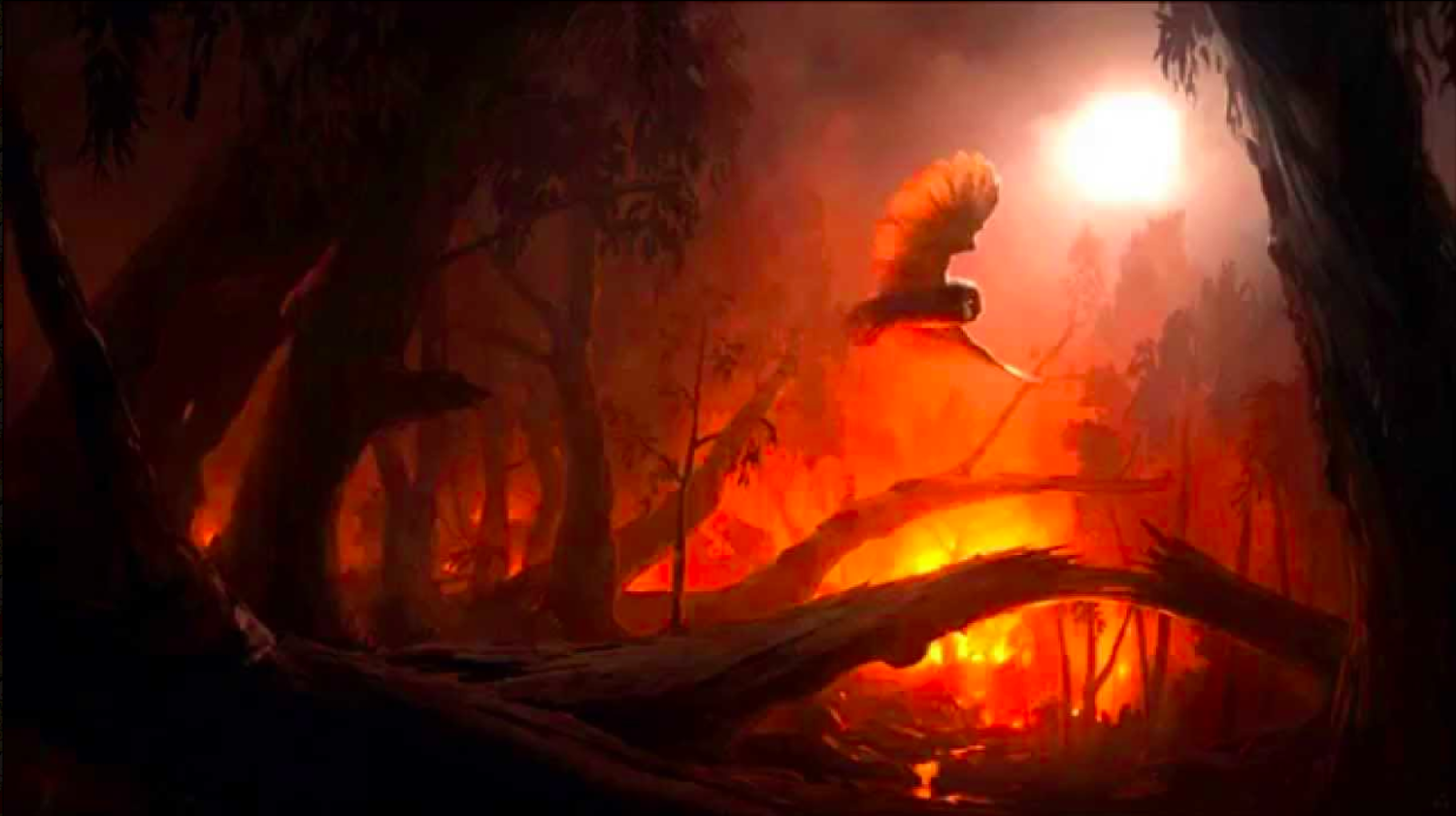 Chapter 24 - The River of Fire

Chonkorchuk attempts to shroud the Knights in darkness, then turns himself invisible, and sends the fefila into their camp to try to free the prisoners. Raskel attempts to put them to sleep. Both efforts to stop them fail. One of the knights draws a radiant sword that effectively dispels the darkness, and Raskel's sleep spell fails to slow them. One of the knights compels Raskel to abandon any plans to escape, and their leader Andreas runs him down. The fox-man tries to distract him with questions about why he is in the Otherworld, and claims of allegiance to their faith, but Andreas is unperturbed, and binds Raskel, before forcing the prisoner to walk back to their camp.   Chonkorchuk has somewhat better luck. He has trouble getting away from the knights on account of the complete darkness of the Otherworldly night, and falls prey to the trees' craggy roots on several occasions. Still, he is invisible, and the two knights have trouble finding him and striking him down. He manages to get away, and enters the camp. There, the fefila has already sneaked into the prisoner’s tent unseen, though Father Sigismund detected it, and tried to compel it to depart. The fefila resisted his efforts, and hid underneath a rug. Meanwhile, Chonkorchuk finds his way into one of the empty tents, where he lifts a battleaxe, a fur cloak, as well as the Hat of Disguise and the Pipes of Fear the knights had taken from their prisoners earlier.   The other two knights, Hubertus and Dietlieb, return empty-handed. Sigismund is upset, but thinks Chonkorchuk can be made to cooperate. Andreas threatens to torture or kill the captives unless the missing party member submits. Sigismund calls him out in a booming voice, but Chonkorchuk convinces the Knights he can help them reach their destination if they leave him free. The stress of the fight has made memories of his earlier sojourn with Baba Yaga return. He remembers that the River of Fire, beyond which her realm lies, is within two days travel, and he offers to lead them there.   The Knights allow Chonkorchuk to depart, and set up for the rest of the night, making sure they keep the rest of the prisoners under control. They finish interrogating Khurshid, whom they have been keeping in a separate tent tent. They have found that he has facility with horses, and tell him they can use his skills to tend to Baba Yaga’s herd, so as to win a magical horse by performing this service for her.   The following day, the Knights call forth their horses, load their prisoners on them, and break camp. After traveling for only half a day in the direction indicated by Chonkorchuk, they find the River of Fire. It is 100 feet wide, and 300 feet deep, with liquid fire flowing at the bottom of the ravine. Chonkorchuk recalls there being a rickety wooden bridge here somewhere, though none is to be seen here. He also recalls a fire-breathing serpent living in the ravine. He then goes off in search of the bridge.   After he departs, the Knights order the prisoners to find a way to cross the river. Kurshid admits that he can transform into a hawk, and does so. The Knights send him across the ravine with a rope. He changes back, and ties the rope to a small tree on the other side. The Knights’ archers shoot a bolt with another rope attached to the other side, and Khurshid fastens it to another tree. The effort of transformation has left him exhausted, and doubts arise about the quality of his rope work.   Raskel takes over the planning. He has Khurshid retie the second rope below the first, and then has the archers shoot over most of the rest of the rope, to create a thicker bottom rung for people to walk across. He then has Khurshid recheck the ropes on his side, and the Knights tighten those on their side. Finally, the moment to test the bridge arrives. Plamen and Katarina are the lightest, but ultimately, Plamen is chosen to make the first crossing. Raskel designs a harness for him to fasten him to both the top and the bottom ropes in case he slips or one of the ropes snaps. The half-polevik succeeds in getting to the other side, and helps Khurshid to tighten the knots again. Then it’s the turn of the heavily armored Knights. The archers are sent first. Hans watches one of the bottom ropes snap, but it is then shot back across and retied. He also slips, but the harnesses keep him attached. After that, Hans, Franz, Sigismund, Andreas, Hubertus, and Dietlieb all make it across successfully. At this point, Andreas decides that they have the two prisoners they need, and severs the ropes from their side of the ravine. The Knights then summon their steeds, and walk into the woods, leaving the rest of the party stranded on the other side of the River of Fire.