Born in Lazarevo to Boris the smith, Katarina has always looked for ways to get out and become something greater than a peasant girl. She got the chance when a traveling smith named Zhitko offered to marry her if she would entice three people, all rumored to have magical powers, to seek out the Alatyr stone in the Otherworld, in exchange for her hand. The three suitors - Chonkorchuk, Plamen, and Rodion Raskol'nikov all answered her invitation and showed up with gifts. Though she voiced preference for the plucked chicken brought by Rodion, the redheaded mountebank declared himself out of the running on account of his age. Otherwise, Katarina not revealed her preferences.   After she established a relationship with the suitors, she was initiated by one of the 'suitors', a hermit named Chonkorchuk, into the service of Baba Yaga. She then fled the village with Chonkorchuk and his companions, and, after evading the pursuit of Zhitko in serpent form, she found herself in the Otherworld, seeking fortune along with her new companions. After being captured by the Knights of Ritterheim, she finally made her way to Baba Yaga's hut. There, after helping to fight off the knights, she made her way inside the compound with the rest, and became the crone's handmaid.   Katarina grew up as the village beauty. She is aware of how other people see her, and uses it to her advantage as best she can. She can be rude, and has a reputation for lewdness among the youth in Lazarevo, but she is good with children, and is greatly beloved by her youngest siblings. Prior to initiation, she already exhibited magical talent, and was known to create a bun that rolled around and insulted people (specifically, the volot Annar). Since then, she has mastered magics that enchant the mind, and she can also produce lightning from her hands.   Katarina retains certain childish characteristics, which increases her attractiveness, to some. She has a slight lisp, and stutters a bit when she is put in compromising situations. 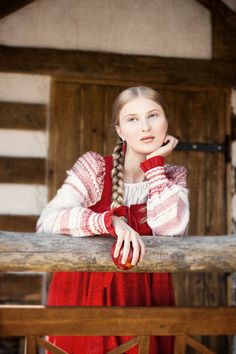