The Knights of Ritterheim are another monastic fighting order set up by the Hierophant. Their initial headquarters were in a stable just outside the Tomb. Most of these knights were Garips rather than Friaziny, and after they returned home, they were recruited to fight wars against the heathen Galindy, which they recast as another war against the Infidel.   The Knights of Ritterheim soon established a colonial, theocratic state on the shores of the Western Sea, and continued to expand their domains eastward. It is known that they raided an offshore island that housed a pagan shrine, and destroyed it. They killed all present, though a young man called Druvvaldis, who was being trained to serve the old spirits and gods, managed to evade them, and escape.   Here they came into contact with regions that espoused the True Confession. Given the poor state of relations between the churches, the Priory declared the True Confession a false church, and continued to expand their domain at the expence of Noriki principalities. Some Noriki princes also behaved aggressively toward the Knights, some made situational alliances with them, but generally, the Knights are regarded as invaders and apostates.   The original structure of the Ritterheim state was very harsh for the knights themselves. They had to undertake vows of chastity, celibacy, poverty, obedience to the Hierophant, and stablity, they had to attend all services, and take all meals together, communally. Of late, the Knights have grown wealthy owing to donations by big landlords, control of the amber trade, and provision of protection services to the Guild Fellowship - an alliance of maritime trading cities. Owing to their growing wealth and power, the rules have been somewhat relaxed. Particularly prominent knights that command local chapters treat their possessions almost as private fiefs. Some of the lords of these fiefs, such as Andreas von Drachenberg, are known to take foreign captives, and treat them with great brutality and sadism (as was the case with Alden Gravenitch). It is not known how common such behavior is, but among many of their neighbors, the Knights have a fightful reputation.   They are sometimes found abroad, or even in other Realms, as members of military expeditions, though sometimes they accompany diplomats and trade missions. One such mission was encountered by Druvvaldis and his companions in the Otherworld, where they had come in search of Baba Yaga's famed horses. Why they needed them is not known, but they were willing to use members of Durvvaldis party to do what was needed to procure them. They were subsequently defeated, but most, led by Andreas von Drachenberg, may have been able to get away.   Their standard is a black chess knight on a white field, though higher-standing members of the order sometimes adopt distinct color schemes and embellish their standards by depicting the knights as heraldic beasts such as unicorns or hippogryphs. 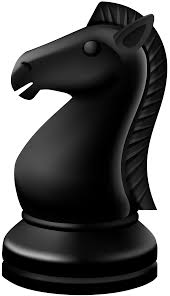