A tall, very thin, haggard-looking man with pale skin, dark hair, and blue eyes – one bigger than the other – Chonkorchuk puts in a striking appearance. Born to Kuz’ parents in Trofimka a few years before the Kochmak raid that largely destroyed the village, he traces his descent to the original hunter people who populated this part of the world before the Noriki arrived in larger numbers. Kuz’ and Noriki, heathens and Gaalites, lived side by side when the village was the property of Taras Trofimov. But when the land passed to the Church, and many of the residents fell into dependence on the Lazar and Liudmila abbey, many of the natives were pressured to convert. Chonkorchuk’s parents died shortly after returning to the village as it was being rebuilt. Exhausted by their wanderings, they nevertheless chose to remain free, and passed down some of the old beliefs to their son. The boy was left to fend for himself, doing odd jobs and living off what the forest provided, but he never abandoned his parents’ teachings, even after the head of his clan converted to the True Confession, and went into service as a guard at the monastery. Unhappy with being associated with him, his erstwhile cousin and playmate Tiutiulka informed Hegumen Yaakov that he witnessed Chonkorchuk practicing sorcery. Chonkorchuk was summarily expelled from the village.   Fleeing to the woods north of the Vydra, the young man wandered aimlessly before falling into a dark hole. It led to a realm deep underground (or perhaps elsewhere) that was ruled by the ancient hag Baba Yaga. Though Chonkorchuk remembers little of the realm or its nature, or how long he spent there, he remembers that he made a pact with the hag (whom he calls ‘The Queen’), pledging life-long service in exchange for power – power he sought to use to avenge himself on those that betrayed and mistreated him. She then sent him back, charging him to take over an abandoned hermitage in the woods nearby, and to keep the area clear of intruders. He was not to return or to seek out the portal he passed through until being given explicit permission to do so. Chonkorchuk later discovered that the hermitage was previously used by Hegumen Yaakov during his time as an ascetic also. The place was covered in scratchings and symbols – both Gaalite and heathen, though it was unclear whether they were placed there by the same person.   Chonkorchuk remained at the hermitage for 16 years. Given his fearsome appearance, and likely, the influence of the nearby portal, he was generally left alone. Though survival was difficult, Chonkorchuk was able to supplement what he found in the forest by traveling to nearby villages, and using his gift to read fortunes. He also came to establish relationships with various denizens of the wild that the Church labeled as “unclean”, and learned to speak their language. He had grown increasingly wild and antisocial as a result of his solitude. Though he anchored his life around his great fortune - being able to survive all hardships due to the Queen’s goodwill, the possibility of returning to the portal to learn more of her secrets, as well as by eventually confronting those responsible for his exile, he has grown a bit choleric and unstable as a result of the long wait. On those infrequent occasions when he interacts with others, he often raves about the great cosmic plan that the Queen has in store for him, and for the rest of the world. Nevertheless, when alone, he is a gentle soul, and cares assiduously for the forest. He has great reverence for the Old Ways, has a deep sense of justice and believes in the equality of the great and the small.   After receiving the unexpected invitation to Lazarevo as a potential suitor to Katarina Borisovna, the smith's daughter, Chonkorchuk met Plamen and Rodion Raskolnikov - other suitors, and joined forces with them as seekers after the Alatyr Stone, an artifact sought by Katarina's family "friend", Zhitko. The path seemed to lie through the portal to the Otherwold, and here, Chonkorchuk and his new associates met his old patron, Baba Yaga, who offered to let them enter the Otherworld in exchange for three services - returning treasure that was stolen from her, returning a servitor who had fled from her, and bringing her a bride who is to serve her. Chonkorchuk did his utmost to ensure the mission concluded in success. He staunchly insisted that Baba Yaga's treasure, recovered from Crow's Meadow Warren, would be returned to the crone in its entirety. He ensured that the bear shapechanger Vasya was brought back to her safe and sound. And he played a key role in arranging the ritual to initiate Katarina as Baba Yaga's servant, and made sure she got to the other world by facing off against Zhitko (in fire-breathing serpent form), and later, the Knights of Ritterheim. Subsequently, he accepted Baba Yaga's assignment to investigate the goings on in the Tsardom of Chochur-Muran, near the approaches to the Island of Buyan. Upon returning to the Visible World of Yav', he found that it had somehow changed (or that he was somehow changed by the Otherworld).   As a reward for his services, Chonkorchuk was granted a helper - a creature called "Fefila", which appears as a red-furred cross between a squirrel and a beaver. The fefila typically stays invisible on Chonkorchuk's shoulder, and warns him of danger. Occasionally, it is used as a spy, or an aide - it is adept at finding medicinal berries, and delivering them to its master.   Chonkorchuk also shares a mental link with Katarina, who has now joined his coven as an aspirant. Since that took place, there has been no further discussion of marriage between the two, however. 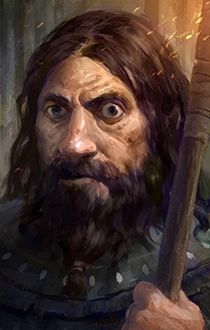