A tall, resilient former mountain tribe with a rich yet troubled history, the Sylai have always been home to the western Skyreach Mountains, mixing and mingling with the neighbouring Nathras and Gideya despite not always peaceful relations.   The majority of their population today resides all across western Ivendarea, having been driven from their main homestead Saratheas during the Cleansing in large numbers. While many returned (even if with reluctance) after Iovana Brestine had achieved a peace treaty with the conquering Assadin, a high percentage of Sylai can still be found among the population of Fandyl, Westpoint, and particularly the far away Panthil.

The Sylai's dialect is smooth and flowing, very close to the "official" Nyrval taught in school. In daily life both Nyrval and the commonly used trade tongue are used interchangeably, and most Sylai also speak the Assadin's Azash without problems. In cities like Saratheas, where an abundance of cultures collides, a unique dialect has begun to form that mixes influences of Nyrval, Trade, and Azash, creating a language unique to this region and the Sylai as experts in it.

As a people once at the centre of different surrounding cultures, now far spread, the Sylai adapted many influences from around them into their own daily life.   Their origins are those of a mountain tribe living relatively independently and isolated off of the world around them as semi-nomadic hunters. Quite early on the Sylai discovered the rich mineral and ore veins of the Skyreach Mountains, being the first Ivendarean people to professionally conduct mining. Sylai jewellers and smiths of all schools are regarded as some of the most talented and sought-after. The valuables found on their lands also made the Sylai one of the richest peoples of Ivendarea, which is reflected in Saratheas' extravagant and impressive design showing great craftsmanship and wealth.   As mentioned before, the Sylai aren't a people known to be particularly religious in the traditional sense, but most consider themselves part of the Aman'a Valeethi. When Aman began to rise to fame and followers started to gather around them, the Sylai were sceptical of this "cult" around the reclusive, far-travelled scholar. Having had their fair share of experiences with charismatic leaders abusing their follower's trust they decided to be cautious. Only over many centuries time and thoroughly studying Aman's discoveries and teachings, more and more Sylai began to follow this new belief system. After all, it wasn't too different from the old, the same gods, just a different interpretation of their influences on this world and the Nyr's part in it.

United by their fierce pride of their homeland and nation's achievements the Sylai always strive to be better, are ambitious and persistent. They are also strongly inclined to magic.   Many past experiences with rulers not worthy of their obedience, even long before the Assadin arrived, made the Sylai sceptical of all kinds of authorities. They question, tread carefully, don't always show their true intentions from the start, and rarely take something at face value. Open criticism of the government and other institutions are just as commonly found in Sylai culture as public discussions and debates on pretty much any subject: from the design of a park or building, to the schedule of a school, or the newest fashion trends, everything is up for debate and the Sylai are very favourable of public votes and the gathering of many different opinions.   The Sylai aren't overly religious, in fact among their population they have the highest percentage of atheists. They prefer theoretical, analytical approaches to everyday problems, rather than being guided by emotion and belief. While most don't question the gods' existence as such, they were always known to discuss religion, trying to discern the origins of certain believes and local cults, and figuring out their place in this universe on their own terms. Therefore, those who believe in the gods, are almost exclusively followers of Aman, as Aman themself also followed their own logic and curiosity and through this managed to answer many of the pressing religious questions of their time within their teachings.

Gossip and talking behind someone's back are massively frowned upon in general, but particularly the Sylai. This doesn't mean though one has to always be direct and state their unfiltered opinion. Words are to be chosen carefully to not offend or cause a conflict. Personal information is only shared with those close, too much openness and directness can be regarded as off-putting or pushy, in the worst case it could severely offend. It is not wise to wear the heart on the tongue, as it brandishes one vulnerable and untrustworthy. It is also not polite to ask private questions in public, or question people intently that you're not at least friends with and have known for a while.   Most Sylai alive today have some sort of connection or trauma associated with the Cleansing of Saratheas. The older generations witnessed it themselves, lost relatives, friends, or mentors in the massacre, the younger generations grew up with the stories of the horrors of this military crime told by survivors. It is a very emotionally loaded topic that is not to be brought up as small-talk - or at all, unless maybe in a historical context, and as a reminder of Zerenda's horrible deeds.   The same applies to some degree to the deeds of chief Randra, a cruel ruler in ancient times who had planned and carried out several vicious attacks on the Gideya to steal their supplies during a series of harsh winters. Randra was eventually slain in a fight against Neron, which was a crucial moment in the unification process of Ivendarea. While this all lies thousands of years in the past, it is still considered a great insult to be compared to Randra in any way, shape, or form. His actions are met with great resentment, and in the eyes of many Sylai the ends never justify the means.   Trust and keeping one's promises is essential. If one abuses a Sylai's trust just once, it will be sheer impossible to regain it back.

Clothing has to be practical for the Sylai, every items always had to serve a purpose. Layers of warming wool keep out the cold of winter, and sleeves can often be tied together so they don't get in the way when working in the field or at the crafting table creating intricate pieces of jewellery or art. Sylai fashion has to be robust and easy to clean, more delicate fabrics are usually reserved only for the most festive occasions. Being practical doesn't mean ugly though. While muted colours are favoured, extravagant shapes, boldly coloured patterns, or unique statement pieces in contrasting colours, often adorned with metal or jewel elements stand out and reflect the Sylai's love for unique and bold art - and maybe even a certain level of grandstanding.   The only clothing material that is uncommonly used are animal furs and leather, as the killing of animals for food or clothing contradicts the beliefs of the Aman'a Valeethi.

Since the Sylai began to settle down, their architecture was always ambitious and carefully planned to create a harmonious overall picture. This becomes particularly apparent in Saratheas, a city once founded as the centre of justice, later an important temple site, now the capital city of the whole nation.   Walking through the streets is a humbling experience, everything is big, bold, but clean and clear. Held almost completely in white Saratheas stands out like a polished jewel on the rough mountainside, and the Sylai like to see themselves as such as well. Pushing themselves to be their best possible selves with persistence and dedication it was possible to shape this nearly perfect city in an environment that seems less than ideal for anything to thrive. The Sylai love this contrast and see it as a personal motivator, too: no matter how grim the circumstances, with enough ambition and daring to go new paths there is always a way towards harmony and perfection. This longing for harmony is a trait they share with the Gideya, whose architectural knowledge also influenced and shaped the design of the city.

Self-restraint, ambition, care, and carefulness are ideals that are reflected in the Sylai's sense of aesthetics. Like many Nyr they prefer to wear their hair long, as it is an indicator of age and therefore wisdom. It is regarded as precious and taken great care of. Practical hairstyles and accessories like hairpins and headbands keep it out of one's face and harm's way, it gets braided, pulled back, or pinned up in aesthetically pleasing techniques. They enjoy to highlight their best features without giving too much of themselves away. A certain mysteriousness is considered intriguing and reflected in darker make-up styles and a few accent colours complimenting natural features - for example a bold green scarf, the same colour as the wearer's eyes, in combination with an outfit consisting of mostly brown or grey tones.

It is regarded as rude to ask personal questions, being too forward or too prying, so courtship is usually a long process until a couple becomes closer. To avoid misunderstandings, and to signal availability, specific pieces of jewellery can give away a person's relationship status, sexual orientation, and a whole lot of more social clues. It is supposed to make finding a potentially matching partner a little easier and less disappointing when it turns out that after three months of courtship the object of one's desire has no interest in a relationship at all.

Sylai are ambitious and goal-driven, while at the same time very cautious and private when it comes to social matters. A potential partner shouldn't only be supportive of the other (and vice versa) through highs and lows, a romantic relationship is always serious business and meant to last. This is why a lot of time is invested in courtship and getting to know each other's personalities before getting to know the other as a person with a background and history.   That being said, more casual relationships aren't completely off the table, but they generally are rarer. Caution is of the essence, not only with whom the bed is shared, but also what information one is willing to share with the other, if any at all.

Aman'a Valeethi - Saratheas once used to be one of the nation's main temple cities, and despite the Sylai not being fiercely devout, most consider themselves followers of Aman's Teachings   Avon Julanor - For a long time Saratheas was the capital of justice, devoted to Julanor; while after the Cleansing the headquarters of the order were moved to Panthil, until this day Sylai are sought-after recruits for their strong will and magical power 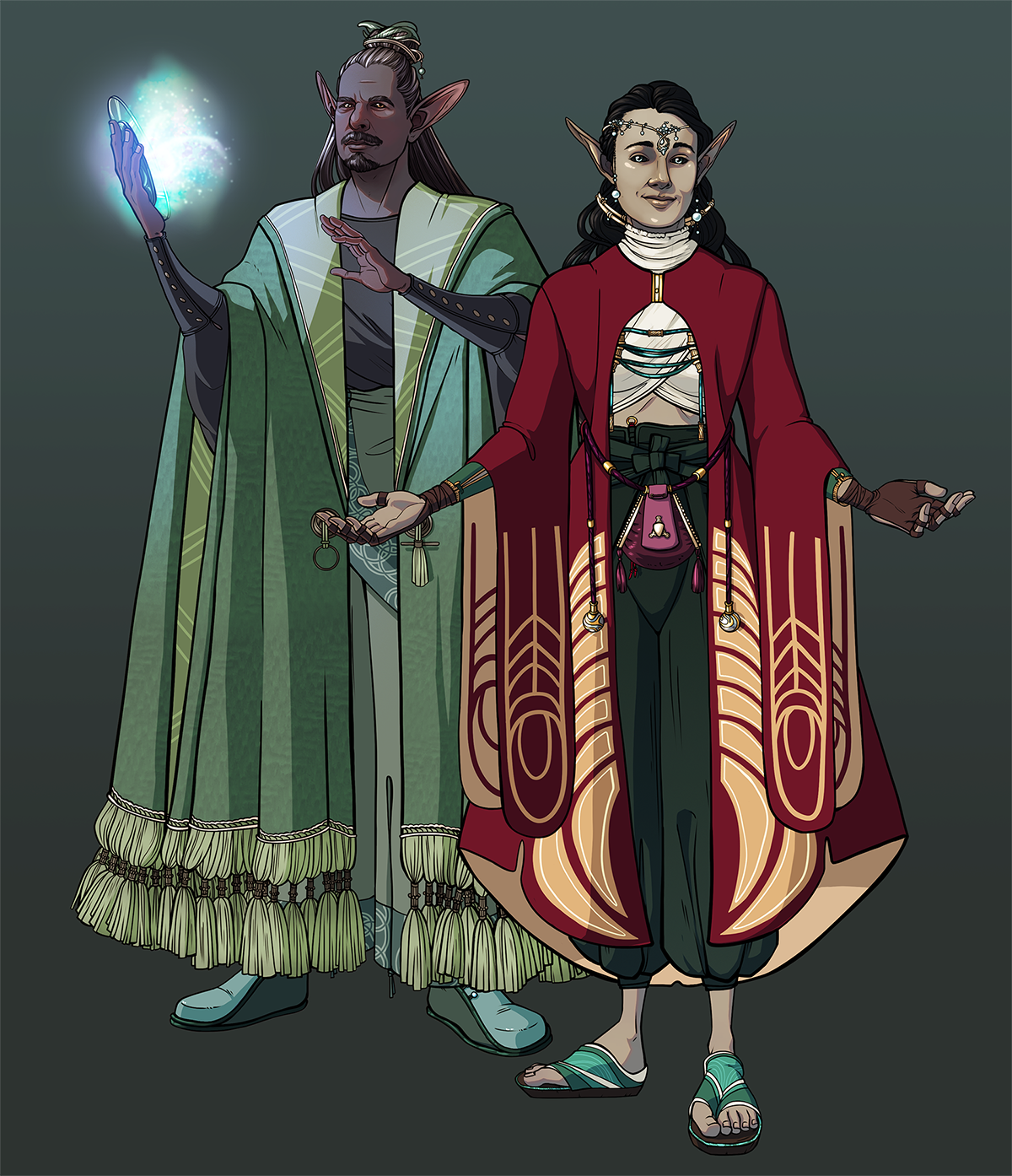 Two Sylai individuals that could be seen walking side by side on a Sarathean street, a scholar and goldsmith respectively. Both wear heavier wool coats of different make over lighter fabrics such as linen and silk. In the warmer summer months open shoes are much more commonly seen than expected from a city in the mountains, but closed shoes and boots are more common here. The Sylai mage wears a more monochrome, harmonizing outfit of green and blue tones, both colours connected to magic and spirituality in Nyr society. While less ornate than the clothing of the goldsmith, particularly the heavy, flowing coat with tassels is an eye-catcher, and it certainly was expensive. The silversmith wears a variety of asymmetrical jewellery and a small belt-pouch to store valuables, a popular and commonly seen accessory in a contrasting colour. Both coats can also be worn inside out, are coloured differently on either side.