Making the Most out of Life

The Nathras are at home by Ivendarea's northwestern shores and islands and one of the more reclusive population groups. Sticking to themselves and feeling a little detached from the events in the south and east of the nation, they are fairly independent, but a warm, creative, and community-oriented people nonetheless.   In ancient times the Nathras used to be mostly nomads, but they also had small semi-permanent settlements along the northern shores, one of them developing into the city Westpoint.

The accent of the Nathras is considered "flat" and a little monotonous combined with speaking rather fast. Since most Nathras speak Trade more commonly than Nyrval, elements of both languages are mixed into the other, creating a rather unique colour, sound, and vocabulary.

In ancient times the Nathras were predominantly fishermen. They were also the first to build ships and attempt to set sail to foreign shores (with mixed results).   With the spread of Aman's Teachings and more and more people becoming part of this new religion, the Nathras felt increasingly threatened in their way of life. While embracing any new knowledge, some of the rules proposed by Aman, such as not eating fish and meats, or hunting and fishing for food and leather, the Nathras struggled to adapt without any new means to sustain themselves in the cold north with infertile earth. Groups such as the Wylaai, who also had to deal with a too harsh environment for farming, received and embraced the support of southern communities to artificially create fertile land. The Nathras though were more hesitant to give up on their established way of life. Until today there are many Nathras who call themselves devout followers of Aman's Teachings while still continuing their traditional trade of fishing.   Despite their isolation, the Nathras were on two occasions accidental ambassadors for their whole nation. Both the Aapha of Darthonis and the Kitu from far away Drua Shye landed first on their shores. So while they are a little bit detached from the main portion of their continent, they are rather connected to dealings with the outside world and developed into versed traders. Trade is actually spoken more commonly in Westpoint, the capital of the region, than any other language including Nyrval. Currently Westpoint also calls Ivendarea's largest trade harbour its own, and to the outside world the Nathras enjoy a reputation of being the most laid-back and open-minded of the Nyr.

Living conditions in the north are comparatively harsh, with unpredictable cold and storms, therefore it is important to the Nathras communities to be adaptable and keep an watchful eye. Courage is one of the most-taught virtues, and unselfish devotion is the most important service one could offer for the community.   The Nathras have a very relaxed view on life and death. Death is not the end of all things, and sometimes a noble sacrifice is necessary to prevent greater evils from happening. Life on the other hand is meant for joy. While not scared of hard work, a rather laid-back attitude is common in the northern villages. The Nathras work to live, not the other way around.   Also, not many would openly call themselves religious, but subconsciously many of their social conventions are actually tightly connected to the believes of the Aman'a Valeethi, and most do believe in the gods. They just don't make a big deal out of it and don't tend to pry into other people's business. Accepting differences in regards to politics and religion is essential to the Nathras, particularly because as a people of traders they often have to deal with travelers and outsiders.   Similar to the Wylaai the Nathras are also known to be rather hospitable, and they enjoy fun and entertainment. Westpoint, the settlement with the highest percentage of Nathras among its population, is home to an arena where people can measure their strength in public battles for the entertainment of a crowd and some coin. All on a voluntary basis of course.

As much as the Nathras enjoy being part of a devoted community, they expect everyone within the community to contribute something, even if it is just a symbolic gesture. If everyone helps together to get unpleasant things done, the faster it is possible to devote oneself to the beautiful things in life again.   While they have a rather relaxed relationship with death, it is not well-liked to talk ill of the dead. In fact, remembering them in a positive light is very important and if not in the local temple, at least in the deceased's home a small space or shrine is dedicated to their memory.   Entertainment and hospitality are so important that it is rude to refuse an invitation or gifts. Furthermore, no food or drink should be wasted, it should be shared, re-purposed, or donated, never thrown away. The same goes for basically everything else, too: before throwing it out, consider if it could be of use for someone else or for a different purpose. And should someone unexpectedly gain riches, it is expected of them to invest into the community, not hoard their money.

The Nathras will wear their clothes until they're literally falling apart - and then they'll fix them as best as they can, use parts of different articles of clothing to make a new one, or find a new purpose for them. Nathras fashion is rugged and wayward, unconventional at best and questionable sometimes too. Influences from a variety of cultures and eras can be found in everyday clothing, the motto is: do what you like. While most prefer practical clothing that doesn't get in the way and is comfortable, there is not much the Nathras would frown upon in terms of colour and material combinations. Compared to most other groups of Nyr across the nation, the Nathras in particular prefer more fitted clothing and trousers over the flowing robes, wide sleeves, and huge scarves seen more often in central, southern, and western Ivendarea. Remarkably they are also the only group that very commonly wears clothing made of animal materials such as leather or bone. They don't tend to make these clothes from scratch, but if a rich Assadin merchant throws out a still decent leather coat, it is going to be re-purposed and worn rather than wasted.

The Nathras' architecture is exactly as patchwork as one might think when looking at their clothing. Building materials are rare, everything is reused several times. Stones of crumbling ruins are turned into the foundation of a new family home, the wooden beams of sunken ships are salvaged, cleaned, and thoroughly dried, then used for building furniture. Driftwood is integrated into the buildings as are rocks dug up in fields. Some houses are built directly into the sides of cliffs where possible. There's no limit to creativity in terms of housing. In Westpoint in particular nautical elements such as rope and even used fishing nets find their way into people's homes and gardens. An old steering wheel makes an interesting dinner table.   The Nathras are inventive and creative, and they are known to have an eye for design and beauty. Creating jewelry and all sorts of petty wares and haberdashery from whatever they lie their hands on, their markets are a true paradise for everyone looking to spruce up their wardrobe or buy a unique piece of artwork. Known to have patience and a calm hand Nathras also have a reputation of creating particularly intricate and huge mosaics, incorporating them into their buildings and artwork. They find and create beauty in everything.

Individuality is beauty, as is creativity and devotion to a cause... and all is subjective. Colourful body paint and makeup emphasizing the body's anatomy - curves, muscles, tendons, bone structure - are popular. Hair is adorned with little trinkets, natural or glass pearls, worn in braids, decorated or held together with colourful pieces of fabric, or flowing freely. A positive outlook on life, no matter the difficulties, is considered attractive.

Courtship is playful and passionate. Fun and experimenting are important, experiencing small adventures together and getting to know each other during those times. Directness is appreciated, as well as creativity in the way one is wooed, bold and brave is better than following strict traditions and social conventions.

It is rather unusual for the Nathras to begin living in a committed relationship in young years. Exploration and adventure are important before settling down, otherwise unrest might cause tension in the relationship later on. On-off-relationships are quite common, where couples cross paths several times before finally deciding to settle down together - if at all. Many actually never settle down, have children with several partners if they want them, and continue to live life realatively independently. It is very common among the Nathras that children are raised by several adults, related to them or not, rather than specific parents. The community is one big family that looks after each other, and its needs stand above individual relationships. 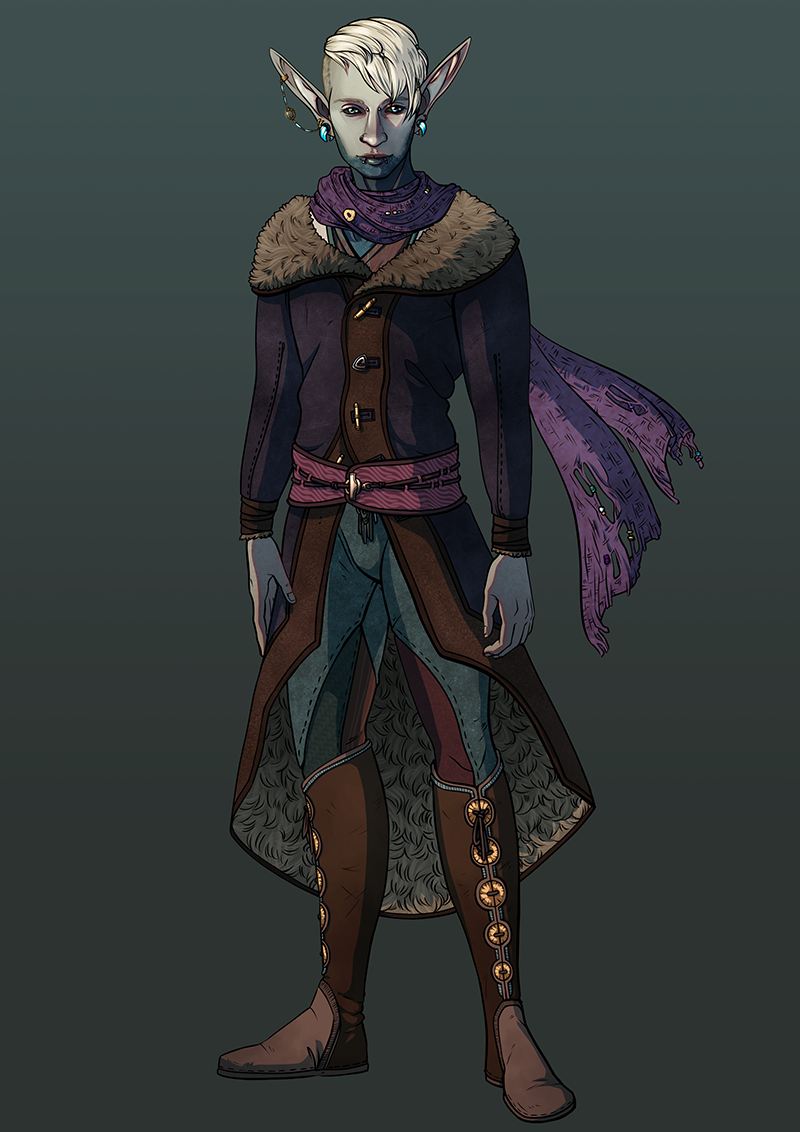 A Nathras worker dressed in a colourful mix of clothes from various cultures and second-hand items is wearing body paint and striking piercings. The woolen scarf has seen better days but was decorated with colourful pearls and pebbles found near Westpoints shores. The typically Assadin-style riding boots are commonly worn by soldiers and might have been won in the arena. The trousers are a patchwork of different materials, and the warm Aapha coat's buttons don't match, but the fur-lining certainly helps against the cold winter winds.