The Kitu originate from the small island chain Drua Shye. Many centuries ago large numbers of them arrived in Ivendarea as refugees, having to flee their homes due to fear of enslavement, exploitation, and worse.   The Kitu are a subgroup of the Jali people making up the majority of the population on Drua Shye. At the time of their mass exodus they diverged from the ruling norms established by the fascist government to a degree that threatened their very livelihoods. The Kitu honour a different god than other Jali, and practised magic in ways that were prohibited. Those who were caught worshiping the wrong deity or not adhering to the established laws regarding magic had to face severe legal consequences - from imprisonment and forced labour to death. Despite living a mostly secluded and peaceful life, many Kitu nevertheless tried to oppose their government, which led to them becoming even more oppressed and in the end prosecuted as a whole. The only way to survive for those who didn't dare to fight but also didn't want to give up on their beliefs was to flee their homes.   Hundreds of years later the fascist government of Drua Shye has meanwhile been overthrown, and the remaining Kitu are no longer prosecuted, but still small in number. Few still live the way they used to and are trying to bring back long lost traditions. Those who have fled to Ivendarea meanwhile consider the peninsula their permanent home, generally accepted and integrated into Nyr society, while being able to stay true to their used way of life and religious beliefs. While most wouldn't consider leaving Ivendarea to return to the land of their ancestors, a lot of Kitu do still have a desire to at least visit their country of origin some day, knowing it only from tales.

In Ivendarea the majority of the Kitu speaks Nyrval in day-to-day conversations, most are also fluent in Trade and Azash.   Jalani, the official language of Drua Shye, is spoken more rarely by the Ivendarean Kitu in everyday life, as part of their history and heritage though it is of course still taught in most Kitu-run schools.

The Kitu honour a deity called Yatana that represents the essence of magic. Yatana gifted the first mortals with magical abilities, who then proceeded to shape their own world and surroundings to their liking and advantage. The Kitu believe that the first mages were almost god-like people themselves, but over the course of the eons the following generations' magical abilities declined until they reached a level comparable to their powers today.   All Kitu possess magical abilities, as all Jali do in fact. What sets the Kitu apart is that they believe their powers have been granted by Yatana, while the Jali as a whole honour the aforementioned group of first mortals with magical powers as gods, which the Kitu resent. They don't see themselves as descendants of gods, more as Yatana's creation and outstretched arm in this world. "Kitu" as a term for their people does in fact mean something along the lines of "hand" or "tool of creation". Therefore all actions they undertake in their lives should be carried out in honour of Yatana.   Since the Kitu consider themselves tools of Yatana, not descendents of gods, their understanding of magic is wholly different from most other Jali. In Jali culture there are very strict laws on who even is allowed to perform magic, and to what degree. It is a godlike power that must be used carefully and with intent, never casually. Using it too intensively will make it dwindle. The Kitu though honour Yatana's gift by using it as much as possible even for more mundane tasks, which is considered dangerous, wasteful, and disrespectful by other Jali. This is one of the reasons why the Kitu try to stick to themselves on Drua Shye, and why they were so heavily prosecuted in the past as traitors and blasphemers prior to their mass exodus.   In Ivendarea, its land downright brimming with magic, they did not have to fear prosecution or judgement to the same degree as in their homeland. The Nyr, all magically talented themselves, were a little suspicious at first but generally welcoming of the Kitu once they learned about the reasons for their exodus. At the time of their arrival in Ivendarea the Aman'a Valeethi were already the dominant religion in Ivendarea, meaning the Nyr believed in a pantheon of gods that had little influence in this world. While the Kitu only honoured one god, Yatana's overall "concept" bore many similarities to the Nyr's gods, and so their religious beliefs were never as scrutinized or questioned as in Drua Shye.

Generally well-spoken and modest the Kitu are overall pleasant members of society that easily blend in with a crowd - sometimes they tend to be overlooked though, not always on purpose.   Having brought forth many great and powerful mages they are a people of knowledge-seekers. Inherently spiritual beings they feel a close supernatural connection to nature and others, despise conflict of all kinds, and put great emphasis on building strong communities that will help each other and stand by each others' side in good but particularly bad times.

With the given historical background of oppression by their own government, often forced into seclusion and secrecy, the Kitu generally don't share a lot of personal information with strangers - and similarly consider it rude to ask or press others about their backgrounds. Tolerance of others' beliefs and cultural differences is thoroughly preached, as it is something the Kitu don't take for granted and cherish.   Modesty and reluctance are also virtues very important to Kitu culture - bragging or other public displays of one's power, wealth, or influence are frowned upon, sometimes even shunned by the community as a whole.

With their exodus to Ivendarea, and over the course of many centuries, the Kitu have over time adopted many parts of the Nyr's fashion into their own wardrobes. They try their best to blend it, standing out enough already through differences in outward appearance. The Kitu prefer muted or darker colours, and more often than not tend to wear the style of flowing robes often seen in central Ivendarea. Darker colours not only help with blending in, they also bear some symbolic meaning.   Before the Kitu were blessed with magic by their deity Yatana, the world was bleak and lifeless. Through their hands, Yatanas tools, they shaped it, created beauty and life. Dressing in dark colours therefore often is a spiritual statement - a reminder that without Yatana, without magic, darkness would still be omnipresent, and the Kitu are to work against this. It is the burden they carry in exchange for their power.

In both Drua Shye and Ivendarea not many examples of Kitu architecture can be found. In Drua Shye, during the exodus, the majority of Kitu settlements were destroyed as individual communities tried to rise up against the unjust government. In Ivendarea the majority of Kitu settled down in larger cities, integrating themselves into the existing communities. The only significant examples of Kitu architecture here can be witnessed in their shrines to Yatana, small temples often build from stone and clay, the larger ones possessing a layered, pyramid-like appearance.   Kitu art though, while mostly vanished from Drua Shye, is much more present in Ivendarea. There are many well-known Kitu authors and poets, even very sought-after cooks specializing in Drua Shye's traditional cuisine. The Kitu also have a distinct and varied culture of tattoo and body art. Very much in contrary to their often reluctant attitude in social situations, the imagery of the Kitu's visual arts is bold and loud, expressing what they are not able to express through language or action. Tattoos in particular, beyond sometimes simply worn for aesthetic or spiritual reasons, can carry a lot of hidden meaning. Some depict social status and accomplishments, which is why high-ranking and older individuals are often more heavily tattooed. Other tattoos can also depict a goal a person has set for themselves, be it spiritual or more mundane - those tattoos often appear "unfinished", e.g. are missing parts or are not at all or only partially coloured-in. As soon as the goal is achieved they are completed.

The Kitu value modesty, generosity, and gracefulness. "Beauty" is a vast term that encompasses all these and many more things beyond physical appearance - how a person speaks and acts, how they treat their surroundings and each other. For the pure physically aesthetic aspects, the Kitu consider tattoos on a person beautiful, because they can tell a person's entire life's story without a single word being spoken. Baring their inside to the outside world makes them vulnerable, but also brave and proud of their heritage, which are valued qualities.

Holding themselves back and being generally raised to not be too brash, Kitu courtship is accordingly reluctant and slow-paced. If a person is drawn to another, few Kitu would openly approach the topic in conversation. Actions do more than words in this case, from spending time together, to little gifts, or writing each other poems to express one's feelings in a less direct manner.

The Kitu usually settle for relationships meant to last, most of them staying with one partner their entire lives. While not technically believing in the concept of soul-mates or rebirth, they do believe that there is a life after death in which lovers, friends, and families will be reunited again.
Related Locations 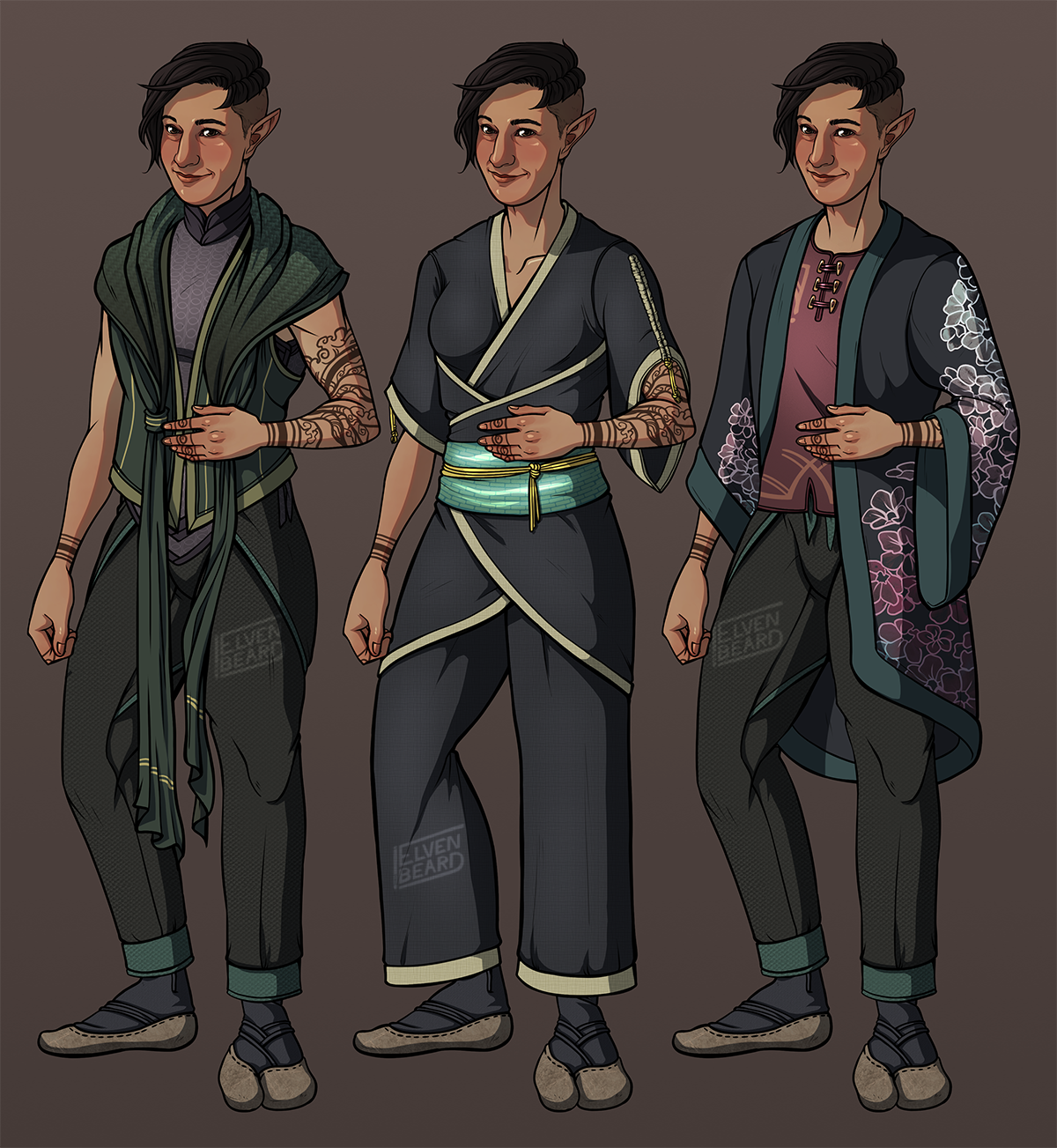 While the “typical” Kitu wardrobe might appear bleak at a first glance, it is actually very versatile. Upon closer inspection one will notice not as commonly seen textures and dyeing/weaving techniques not as commonly found in traditional Ivendarean textiles. Kitu fashion walks the fine line between being form-fitting - useful for impromptu training sessions to hone their magical skills - and comfortable. Many times translucent fabrics are used to showcase tattoos, making the conscious decision to show a part of themselves that would otherwise remain hidden.

Remove these ads. Join the Worldbuilders Guild
The Kitu