Brestine Canwyl'y is a name every Ivendarean knows, no matter if Nyr, Assadin, Aapha, or Kitu. Famous, respected, but not without being criticized, Brestine significantly, almost single-handedly contributed to the reunion of Ivendarea after Zerenda's Conquest. Even today she is still actively engaged in the nation's politics, even if "only" as a member of Iovana Panmorn's council.

Brestine was born the first and only child of Iovana Fannyel of Canwyl and his partner Ylla. The couple put great hopes into their child, reflected already by her name meaning "The Shining One". Brestine enjoyed a high-quality education from an early age on, showed a talent in music as well as in magic, has always been an avid reader and curious about the history of the world. Despite her upbringing in Canwyl's Emerald Palace among the upper class she always stayed modest and had an open ear for the struggles of the people.   When she came of age, going through her Vath'eran, it was revealed that she was not a past Iovana or great artist or inventor reborn, as many had assumed. In fact Brestine learned that in past lives she had been, amongst other things, a farmer on the slopes of the western Skyreach Mountains, a deckhand who drowned in a storm while crossing the Amber Ocean, and a few more similarly simple or tragic lives and fates lay in her past. It was an explanation at least as for why the "simple" people were so dear to her heart, why she related to them so much, and also why she seemed to absorb any and all knowledge and information and opportunities given to her like a sponge.   With her past revealed to her, Fannyel immediately offered her a position in his court's council, and Brestine accepted after a little bit of deliberation. The youngest member of the council of a Iovana several millennia this would have already been enough to secure Brestine a spot in the world's history books, as she dedicated her time to the funding of schools and education programs and significantly helped shape her father's politics to focus more than ever on the uplifting and support of the weakest members of the community - at the expense of funds invested into military, fortifications, and the expansion of Ivendarea's trade network across the seas.

This proved to turn into a fatal weakness of the nation when Zerenda's fleets landed at Ivendarea's eastern shores one day. The city of Beldran fell prey to the invading forces quickly, and as a matter of prudence Fannyel ordered Ylla and Brestine to flee west. Both were reluctant to leave him back, but Fannyel was convinced to find a peaceful solution to the conflict - just in case things wouldn't go as planned, he wanted his partner and child in safety.   Only a day prior to Zerenda's arrival in Canwyl, following Fannyel's invitation, Ylla and Brestine fled first to Darras, and when learning that he had been killed by Zerenda, entered a ship that would take them to Panthil as quickly as possible. Zerenda sent ships to go after them, but the dangerous waters and storms surrounding Maan Garth proved to be fatal to many of his men, so he abandoned the plan and let Ylla and Brestine go.   Incredibly hard times followed for Brestine. Not only had she lost her home, her beloved father, her mother fell into a deep pit of despair and depression, her health quickly declining. Brestine didn't dare at first to seize the title "Iovana" for herself, despite her parents wishes that, should something happen to either of them, for her to lead the nation onwards. Helpless Brestine watched from afar how the Ivendarean Mainland was drawn into a bloody civil war over and over again, while at the same time she had to care for her dying mother. Decades passed with Brestine torn, but she kept speaking to the people of Maan Garth, refugees spilling onto the island and through Panthil's gates like water through a broken dam, following their Iovana into presumed safety from Zerenda's rule of violence. The Nyr are not known to be fighters, and many had lost their homes to the war.   Then Ylla died, and Zerenda conquered Saratheas, committing the atrocious war-crime later known as the Cleansing of Saratheas. Infuriated and grieving at the same time Brestine finally found the strength to act, freeing herself from the paralysis she had been stuck in ever since being forced to leave Canwyl. Knowing that she had failed her people in Saratheas she almost resigned, but those who had fled and survived Sarahteas instead called for her help, still believing that she, the one who had always stood up for the poorest and weakest, would find a way to restore the Ivendarea of old.

Sacrifices made for Peace

She actively began to seek out Zerenda, initiating a regular correspondence via letter - the last thing she wanted was the outbreak of more violence. Saratheas had been basically on lock-down for many years, under military occupation, even the Royal Academy deserted. Brestine was the first Nyr to be allowed back into the city for the now famous peace talks, that led to the signing of a Peace Treaty Brestine had set up, establishing the conditions of a peaceful co-existence. While Zerenda had hoped for a political alliance, an engagement even between Brestine and his eldest son, the Iovana stayed strong and brave. In an act close to an insult she declined the proposal, resulting in effectively banning herself and her descendants from ever entering the Ivendarean Mainland again. In the name of peace though this was a sacrifice she was willing to make.   Brestine returned to Panthil, now officially replacing the reigning Pallis there as the ruler of the island, but keeping her status of Iovana. While at peace again, it seemed that Ivendarea would remain torn, Maan Garth developing into its own little nation within the nation, almost entirely inhabited by the Nyr. Brestine did not like this development, would have rather seen Ivendarea whole again, but for the time being this seemed like a goal not to achieve.

Brestine never settled with a partner in Panthil, keeping her liaisons a well-guarded secret. The fact that she became pregnant was not planned, but she was excited about this new chapter in her life. Her daughter Rava was born 64 years after Zerenda's Conquest, decades after the invader had died, and Brestine hoped that one day Rava would succeed her and sit on a throne on the Ivendarean Mainland again.   Rava never learned who her other parent was, but it did not bother her much, as Brestine was as dedicated as a mother as she was as the ruler of her people. Supporting her daughter's talents in the same way she had been supported from an early age on, Rava grew into a responsible woman with a great interest in politics and religion alike.   When Rava announced that she had found a partner in Panmorn, one of those refugees that came to Panthil after surviving the Cleansing of Saratheas, Brestine felt that the time was coming to hand over the reigns to a younger generation. She had been Iovana for almost 400 years at this point, Ivendarea had stabilized again after the shock of the invasion, and while there was still room for improvement in many areas of life she felt that Rava was more capable to tackle the struggles of the generation that had to build a future in this new nation.   The people were sad to see Brestine hand power over, almost out of nostalgia, her having been the last Iovana of the old Ivendarea, and the people simply being used to her making wise and informed decisions. A lot of hope and many expectations were put into Rava as well - and while she was able to fulfill many of them, Rava's story ended up becoming a tragic tale.

The Revolution War and its Aftermath

Becoming caught up in a political conspiracy with the rebel organization later known as the Omrai Omvalis, her trust abused by a former friend, Rava was dragged into a new civil war. Brestine stood by her daughter's side, offering advice and guidance as best as she could, but in the end Rava had to make her own decisions. Determined to end the war she had accidentally started by trusting the wrong people Rava met her tragic demise on the battlefield, leaving behind two young children, her devastated partner Panmorn, and Brestine, shaken to the core once more.   The Peace Treaty she had worked on that had secured Ivendarea's peace for centuries was gone and broken, Maan Garth now physically separated from the mainland via a magical barrier, the nation in unrest. Brestine was urged to seize the throne again, but she decided against it. The loss of her only child had torn open many old scars, and seeing how much Panmorn suffered, reminded so much of her own mother and her suffering after Fannyel's violent death, Brestine decided to instead stand by his side and urged him to continue on with life. She couldn't stand the thought of her grandchildren losing both their parents as tragically as she had, and by giving Panmorn a purpose to fight for he managed to continue on as the new Iovana for the time being. Brestine, who had retreated from politics altogether over the course of the last few years, returned now into a familiar position. She joined Panmorn's council, aiding him from behind the scenes, and preparing his children to one day be ready to lead the nation into a prosperous future for the country - if it was not too late yet to save it. 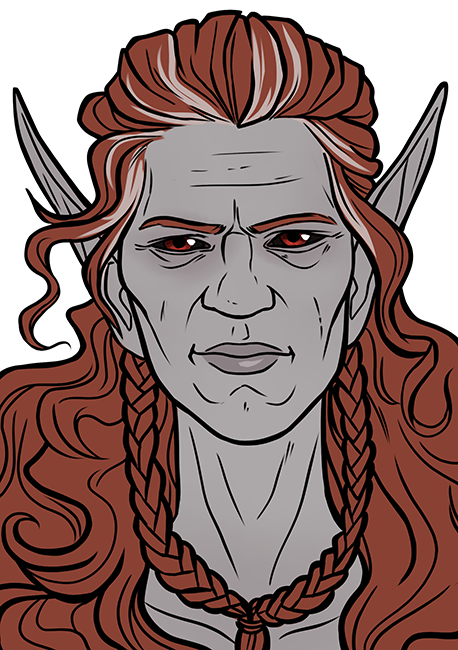 Answering: "Write about an influential woman in your world and what they achieved."
Visit Elvenbeard's Competition Page Check all other answers to this prompt Competition Homepage