YOU DON'T KNOW WHAT KAIL IS!?

Wahaha! I-I'm sorry. I just... Someone not knowin' what Kail is! It's like uh, I don't know what a comparison for humans would be— It'd be like if I told you I didn't know what puppys were!

Kail's what keeps a true Kajh chugging, you wanna learn what Kajh living is like?

You and I, we're going to my house right now. We're gonna put some Kajh fur on your chest or burn your stomach out tryin'!

Kail is a potent brew, the brainchild of the early Kajh settlers of Kajh-Tai. It is brewed from the sweet but capsascin-heavy Meyfar fruit.

The process of making Kail has remained recognizable for Millenia, with some breweries having histories that stretch back to the Sazashi Revolution.

"The Most Storied Brew"

One of the oldest known fermented beverages besides traditional Dolinin Korum wines, Kail was first brewed during The Vadakendanic Procession's colonization of the Jhoutai mainland.

The process of fermenting the native Meyfar fruit came by accident from the early Kajh.

The sweet spice of the fruit produced a heady ale-like brew that glows red and orange like Jhoutai's sun. While many find the spice overpowering, those that can tolerate the burn can enjoy the sweetness that seeps in afterwards.

The shortages of drinkable water made the ingestion of Kail popular by the Kajh, so much so that it became an integral part of their culture even to modern day.

I've had some interesting drinks. Scotch from Islay, Rye from Kentucky, Wines from the fields of Lombardia, Cayenne Rum pulled from the ruins of New Orleans.

Nothing compared to the Kail given to me by the eager Kajh consulate sent to greet us.

I thought it was a prank at first, but their genuine smiles said otherwise. I stood strong, even as the infernal spice tainted all my senses, it spread like fire to my toes and made me drool like I was dying.

I'm glad I stayed the course, for after the burn subsided I was left with a pleasant— I'd call it a "high?" A sweet high that lasted me until the buzz hit.

I thanked them, complimented the Kail, but refused the second cup they readied to pour.

In the unforgiving deserts of Kajh-tai, Meyfar ranches were the first signs of a budding settlement, a Kail brewery would always follow right behind.

With so many breweries, Kail was enjoyed like tea or coffee, and the process for making Kail was refined for millenia.

In the modern day, many desert planets will find eager Kajh ready to colonize to found their own Kail breweries to serve an ever growing population.

This famed brewery has withstood conflict, famine, disease, and disasters.

A thirsty throat will always find a keg of Kail in these storied passages. 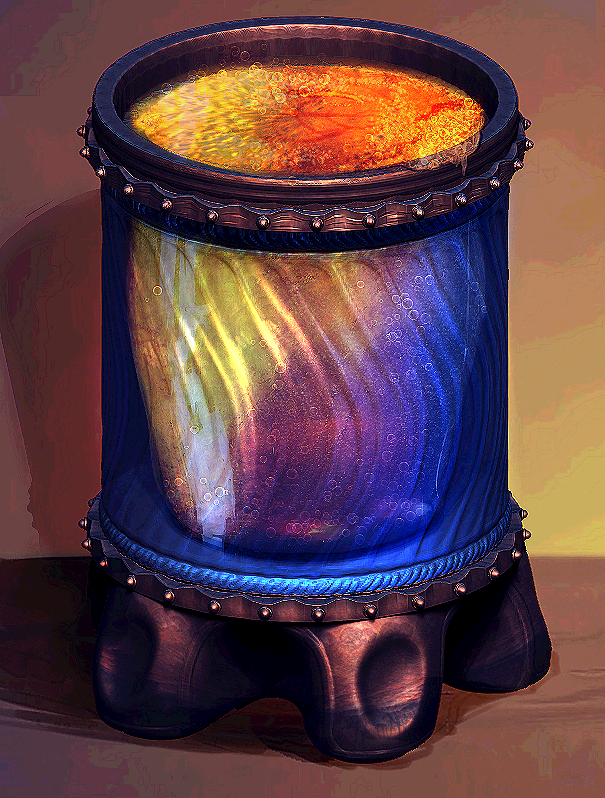 Mug of Kail by Lorsynth

A mug of kail straight from Kajh-tai

The mugs are seen as heirlooms, with entire sets carved to tell family legends or depict the great beasts that roam the deserts of Kajh-Tai.

A Kajh coming-of-age will be given or inherit a set of Kail mugs to make their own when they decide to leave home.

A devious concotion that only the hardiest souls can endure. Rajh-Wine is crafted from the hottest peppers produced in Kajh-Tai, combined with Meyfar Fruit.

The brew was regulated by the Aempis due to it causing anaphalatic shock in daring consumers who were unprepared.

Damn humans. All it took was thirteen of them keeling over, and now none of us get to enjoy Rajh-wine...

The bottle has a warning on it!

A version of Kail that has been diluted to impart less spice and more sweet.

Getting caught drinking this by a Kajh would indeed open you up to ridicule.

Kail is common in most areas where there is a notable Sazashi populace.

Considering the sheer spice of Kail, Humans and Verin partake far less in consumption. If they do, it is often described as an "acquired taste."

This is a drink for the brave. That's a hard pass from me, ha!   Very well written, and quotes add a beautiful depth to the text.

Thank you Solarcat! I mean you could always try the Aempian-wine varient. Just don't let anyone see :P

I really like your quotes, the variants, and the tone of your writing.

Appreciated hcraven! It was a really fun one to write!

Oo the art is so pretty! :D I think I'll pass on the drink itself though. I like that there's a sweeter variant that would invite ridicule if the Kajh noticed you drinking it.   Love the quotes too! <3

Lorsynth did an amazing job with that mug and drink, eh?   I mean I'd slam down some of that Aempian-wine without a care in the world! It sounds delicious!